It was lovely to meet family historian Robert Mason at the Middleham and Dales Local History Group talk last week. He has already contributed a great deal of his own family’s history to the Dairy Days project, particularly about their connections to the Carisbrooke Road Dairy in Liverpool. Having heard Karen’s talk with its emphasis on uncovering the stories of the women in the dairying industry in Wensleydale, he thought we might be interested to hear the story of Mary Metcalfe Ewbank née Pratt (1843-1903), a remarkable Dales woman who ended up running a Liverpool cowhouse on her own for twenty years in the late nineteenth century. He sent us the following article about her which we reproduce here in full with grateful thanks:

She married Chris Falshaw Ewbank who came from the Ewbank family that farmed in the Swinithwaite/West Witton area of Wensleydale. By 1871 she was living at Walden Head. Chris Ewbank was farming 60 acres at this time. Together they had nine children of which six survived to adulthood. Two children died in 1877 and I wonder whether this had anything to do with the move to Liverpool – which certainly took place by 1878 where another child was born and died. The opening of the Settle-Carlisle railway in 1876 and the completion of the line through Wensleydale may also have been a factor. 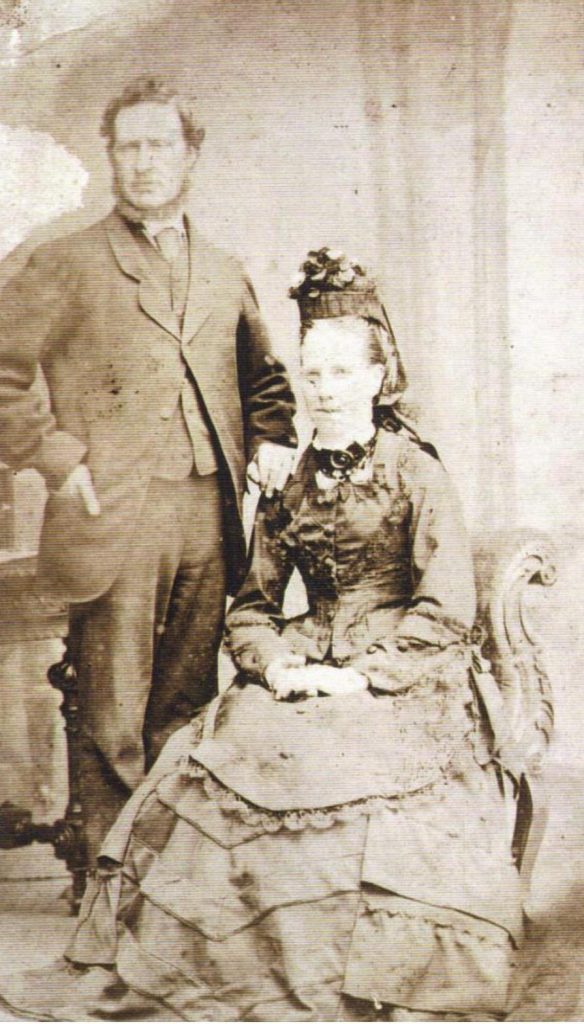 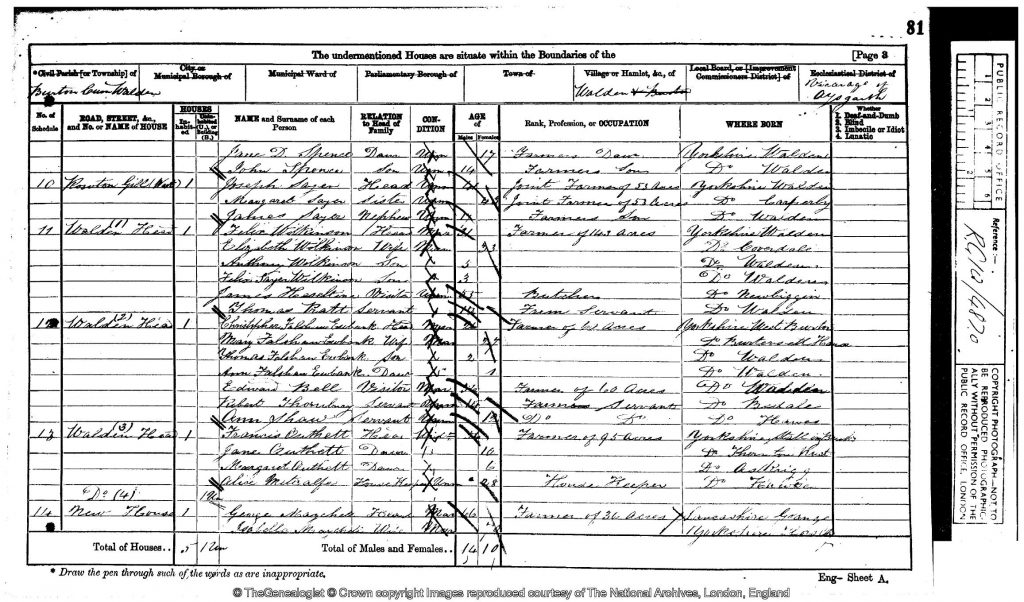 By the 1881 census the family had relocated to 15 Barlow Lane, Kirkdale, Liverpool. But fate took a turn for the worse not long after when Chris Ewbank died on 17.11.1883. My grandfather Edward Ewbank Mason takes up the story in his memoirs, written in the late 1980s:

“Chris Ewbank, my maternal grandfather, in his early married life started farming at Walden Head, Waldendale. Now I have been to where I think it to be, the old farm building still stands, alas, no longer a farmhouse. Just a shell of a building used as a byre. Lovely countryside to visit, but it must have been a desperate place to try to make a living. I suppose he would have five or seven cows, sheep mainly of the black-faced, Scotch type variety. No cereals grown. Possibly a bit of garden cultivation for home vegetables. A travelling tinker now and again. A weekly or even fortnightly trip to the nearest village, West Burton. Otherwise complete isolation — acceptable in summer — acceptable when no schooling problems. But a hard, lonely life. Mother was born there, also Uncle Tom Ewbank. I think the other children would mainly have been born in Liverpool.

But I do know two rather interesting facts of [the Liverpool dairy]. First Grandfather Ewbank used to graze his cows on pastureland that subsequently was to become the home of the great Merseyside football club, Everton, at their ground known as Goodison Park. The other a rather sad chapter of history. Sad, yet it epitomises the strong family ties that existed at that time. It would be quite early after the arrival of Chris Ewbank’s family [in Liverpool] that grandfather Ewbank died — erysipelas originating, I was told, in his nose.
And you can imagine the position Grandmother Ewbank was to be forced into. A young widow, a large family — three boys and three girls by this time and a dairy business to run. Mother could only have been in her early ‘teens. Uncle Tom not so very much older. But to his everlasting credit, Uncle Jim Pratt from Burtersett stepped into the breach. He was quite a young man. Recently started farming and cattle dealing. He came down to Liverpool and for practically all of the first year after grandfather’s death, helped his sister to run the business and to help rear a young family. Yes, Christianity in a very practical way. I was to get a close relationship with Uncle Jim Pratt, his wife Aunt Rose and their three children, James, Richard and Annie when I had those halcyon holidays at their farm, Chapel House, from the age of eleven onwards.

Mary Ewbank must have decided that she had better prospects raising six children (aged between four and fourteen) in Liverpool than returning to the Dales. She kept the business running after her brother returned to Burtersett as the 1891 census shows her as ‘widow and cowkeeper and milk dealer’ at 15 Barlow Lane.”

“Again in 1901 she is shown at the same address on the census with her niece Mary (‘Polly’, née Ewbank) and her new husband Anthony Hird. She died, aged 60, on 19.11.1903. I think the dairy business ceased thereafter as there is no evidence that Anthony and Polly or anyone else continued a dairy at 15 Barlow Lane.

She must have been a strong and remarkable woman as she ran a dairy business for 20 years (and two days) after she was widowed.
She saw all six surviving children grow to adulthood. Her eldest daughter – also Mary – married my great-grandfather Edward Mason in 1899 and continued in the trade at his dairy at 134 Carisbrooke Road, Walton, Liverpool.

Today, about 140 years since Mary Ewbank née Pratt left the Dales for the City, her descendants still retain close connections with Wensleydale, meeting up annually in Hawes.”

We have this photograph of Mary’s daughter, also called Mary (married name Mason), in later life at the wedding of her daughter Ethel. It was taken outside the Carisbrooke Dairy as can be seen from the sign top left. 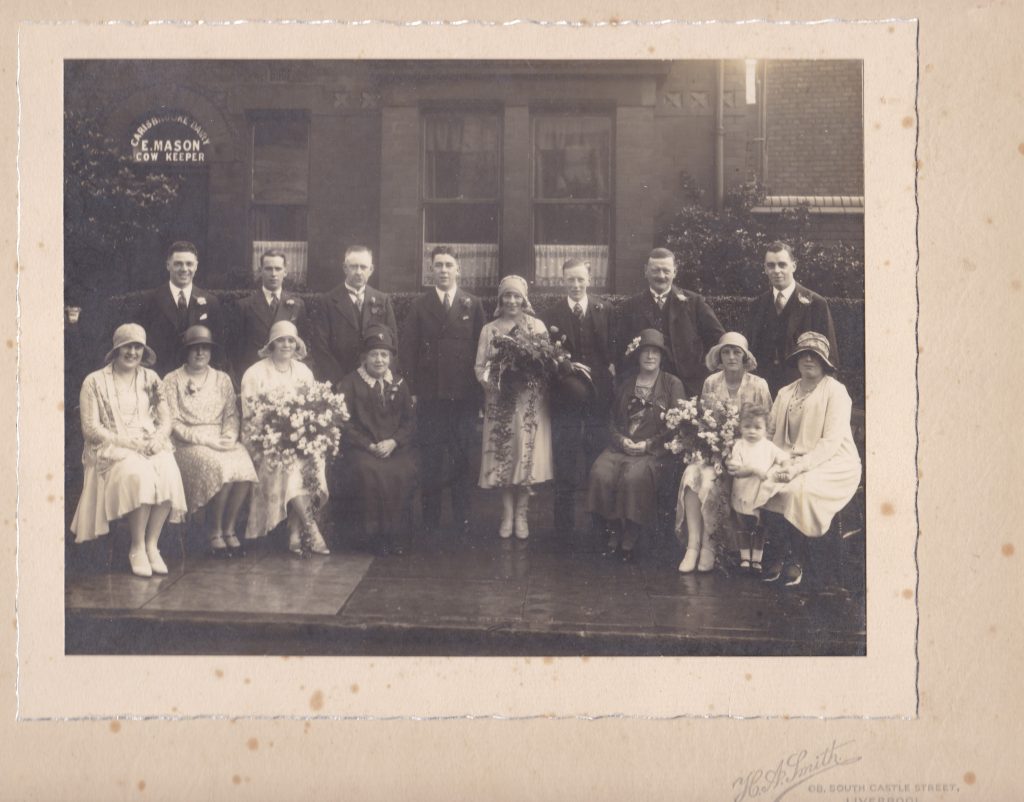 Wedding of Henry Pickup and Ethel Mason in 1931. Courtesy of Robert Mason

UPDATE
The Barlow Lane Dairy has been demolished possibly due to the wartime bombing of Kirkdale , along with most of the old terraced housing which once lined it (read more about the history of Kirkdale on the Liverpool Picturebook website). There is a large open concreted area on the site now, with a modern petrol station and a pub on it. It’s worth noting that Carisbrooke Road where Edith’s daughter Mary ended up, adjoins Barlow Lane at the latter’s northern end so she didn’t have to move far when she married.