Skip to main content
Sunrise in the Yorkshire Dales National Park. The new Local Plan consultation is being supported by new research.

Today our Chairman is asking people to help shape a new set of planning policies for the Yorkshire Dales National Park.

All views will be used to help to produce a new Local Plan, which will guide development in the National Park for the next twenty years.

It is vital that this important piece of work is grounded in facts.

That’s why the Park Authority – with the support of the local district councils and North Yorkshire County Council – has just published three studies on demographic changes, housing and socioeconomic trends in the National Park.

The powerful message to emerge is that if local communities are to be sustained, more people must be attracted to come to live in the National Park.

Let’s look first at population.  The number of people living in the National Park grew steadily for 40 years before peaking in 2008.  It then declined slightly before remaining static for the last five years at around 23,500.

The study shows that age structure of the National Park is becoming increasingly ‘top heavy’.  Since 2001, the number of over 65s has grown by 45%, whilst school age groups have all declined.

The changing age structure goes some way to explaining why several primary schools, in Horton, Airton and Arkengarthdale, have closed in recent years.   However, it’s not all bad news because the secondary schools in the National Park have seen an increase in their rolls as some parents outside the Park have chosen to send their children to schools inside it.

The labour force living in the National Park has also declined since 2001, by 7%. If this continues, it will mean a shortage of employees which is likely to harm businesses by raising their costs and requiring more ‘reverse commuting’.

Ultimately a decline in the workforce could lead to relocation or closure of some businesses and an increased reliance on volunteers to provide local services.

The next graphic shows that in common with other rural areas in England, the National Park has had more deaths than births (the green column) for many years now.

Therefore the population of the National Park can grow (or remain static) only if there are more people moving in than are leaving.  This is essential to maintain the workforce and keep viable local schools, GP practices and local businesses.  Without growth in the Park some services will continue to move away into surrounding areas where demand is more pressing.

Projecting population changes over the next 20 years requires making assumptions about the rate of migration. The next graph runs a number of scenarios based on evidence of recent migration trends. These projections indicate that without a policy intervention, the National Park population will decline between 7 and 9% by 2040.

Migration can, however, be influenced by planning policy. The two scenarios which show a population increase (‘Dwelling-led +50’ and ‘Dwelling-led +70’) rely on house building.

If 50 new homes could be built in the National Park every year, then that should be sufficient to maintain the current resident labour force and dampen (but not prevent) the increasing imbalance between young and old age cohorts.

At the moment fewer than 30 new homes are actually being completed each year.

The graph above shows how completions and planning applications fell after 2008 and have failed to recover subsequently. This fits with the national recession in housing and the reversal in migration around the same time. One of the reasons for continued low rates of building since then may be the continued decline in demand, and the competition from much larger sites outside the National Park.

Turning now to the study on housing need in the National Park, in recent years the house price differential between the Park and the English average has narrowed but the Park still remains very expensive, particularly compared with regional averages.

In theory the National Park is unaffordable to individuals on rates of pay equivalent to the police, fire fighters, nurses or teachers. Those workers would need a mortgage of more than five times their income to afford a house in the cheapest 25% of houses for sale. Mortgages are not available at those multipliers so house prices in the Park are a barrier to those groups.

The study identifies that there are very few modern flats in the National Park, but plenty of 3 and 4 bedroom houses.  Constructing new flats with modern amenities in the larger settlements, to rent or buy, should be attractive to younger working age people, or to older households looking to downsize.

The study confirms that ‘under-occupied’ dwellings (second homes, holiday lets, and empty homes) consume over 20% of the stock in the National Park, compared with only 4% across the rest of England.

In the part of Richmondshire which is in the National Park, under-occupied stock accounts for 30% of all dwellings.  So, when the Authority, working with the housing authorities (the District Councils), comes to choose an annual housing target for the National Park area, it will have to take into account this high vacancy rate and the likelihood that some new houses will inevitably be purchased for non permanent residential uses.

In terms of tenure there is good evidence of demand for new build homes for rent, particularly amongst younger working age households. Rental properties allow greater flexibility to move between jobs and tend to leave more money available to be spent in the local economy.

One of the key objectives in the National Park Management Plan is to promote the Park as a place for younger working age households. Consequently, the Authority and its district council partners are pushing for faster delivery of new homes.  The Authority is also supporting those District and County Council partners on broadband initiatives and projects such as ‘Great Place: Lakes and Dales’.

The housing study shows that only 7.5% of housing in the National Park is council housing or housing association property, compared with a national average of 17%.

It recommends adding a minimum of 20 predominantly 1 and 2 bed affordable homes in the Park each year. The main need is for affordable rent. Only 10% of households in housing need are able to afford options such as shared ownership. Nevertheless the study recommends that up to eight of the 20 homes should be assisted sale homes to create a stock of “intermediate” housing for sale.

Lastly let’s look at the economic study.  There are 10,122 jobs in the National Park, 74% of which are in Craven and Richmondshire.

There are 4,000 businesses, most of which have fewer than 10 employees.

Despite the static population and the sluggish housing market, job growth has been quite strong since 2009, except in the part of the National Park in Eden. The strongest growth has been in the south of the Park.

Accommodation and food services, which are heavily linked to tourism, is the largest sector and has seen the strongest growth since 2009. Together with ‘professional, education and retail’, the service sector is responsible for half of all jobs in the Park.

Farming is still important to the economy and maintains 1 in 6 jobs. There were 1,153 farm holdings in 2017 and although that is fewer than in 2009 the sector has provided job growth in recent years.

The study identifies various risks and opportunities for the local economy. The risks include the movement of businesses elsewhere; the high impact of housing costs on income; and a potentially adverse shock to farming, which would have a wider detrimental impact inside the National Park.

Looking to the future, Richmondshire and Craven seem to have the healthiest prospects for growth. The National Park has opportunities for home working, expansion of existing business (especially tourism) and more opportunities for farm diversification. The study notes that the Park’s strong natural assets could provide a future income for farmers and land managers through management of its natural capital. The Park also needs to make the most of the growth on its edges and within accessible areas of the A1(M) corridor. Ideally a business catalyst, such as the development of a higher education outreach college, would bring a welcome boost to the Park economy and to the area’s younger working age population. 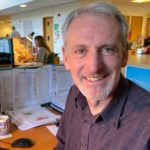 Head of Sustainable Development at the YDNPA

Head of Sustainable Development at the YDNPA