Our next recording is of 77-year old Mason Scarr of Cravenholme Farm in Askrigg. Our recorder was Maggie Townsend. Mason was born in 1941 and came to Cravenholme Farm with his parents when he was four. 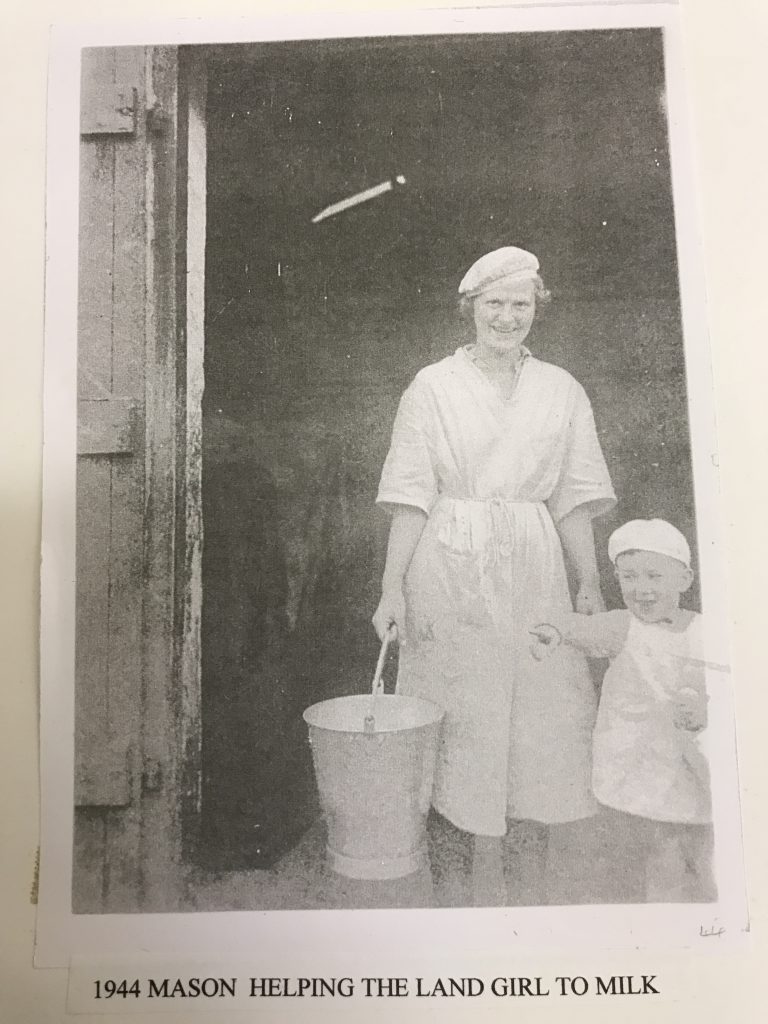 Before they moved, his mother made cheese and butter in the dairy in Askrigg. We’ve already posted her recollections in an earlier blog post Masons Dairy, Askrigg. Mason was too young to remember those days but he does remember his mother making butter for the family as he recounts in this audio clip.

When he was old enough, Mason joined the other lad employed by his father on the farm and the team of three worked together milking and tending to the dairy herd. The extensive interview is fascinating because it gives a really good idea of the sheer volume and variety of the work needed to look after a herd of dairy cows all year round.

“It was hard work in those days, because it was all hand, I mean, the first job y’had was starting the milk machine. Y’didn’t press a button, y’had a Lister, Lister petrol engine t’start u, t’run the vacuum pump and then had t’take the milk up t’the stand and such-like. And then of course, after milking, that’s only part of the job ‘cos y’then had to go out and clean the cow shed out and we always used t’let our cows out, t’go out after breakfast, let all the cows out..even in winter. Well, we didn’t let them out in the summer ‘cos we weren’t there [laughing] they just came in t’be milked in winter again…but m’father always made a point of letting, wanting them out for an hour or so, bit of exercise, into a garth. And I were just t’clean off the head y’know, just the stalls, back the tractor and trailer, back the tractor and cart originally, up the shippon.”
Mason Scarr (77), of Cravenholme Farm, Askrigg

In those early days, muck had to be shovelled out of the shippon then ‘scaled’ or spread by hand onto the fields. Time consuming and back-breaking work as Mason describes. 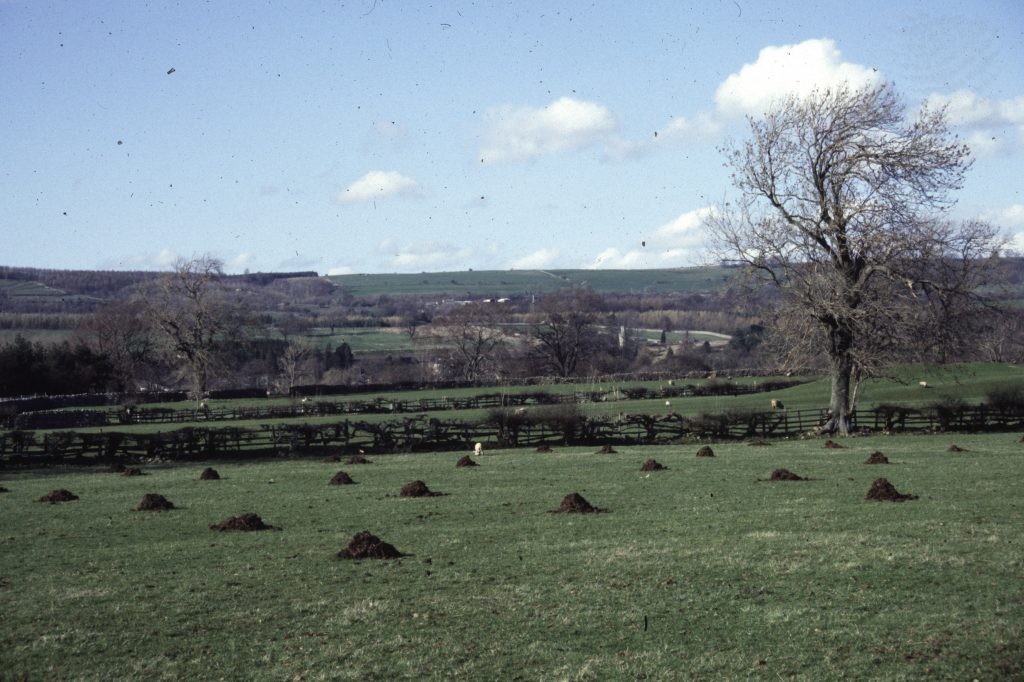 Piles of muck waiting to be ‘scaled’ or spread. Unknown date. YDNPA

“In those days we had a ‘group’, where the muck sat… after it was six inches deep, so if y’got the cart wheel off that, into the group, it was the devil of a job getting it back out again. So y’learnt to back a tractor and trailer, up this narrow, through this narrow door and then you’d start shovelling the muck, two of you, shovelling it in from either side y’see. And with a muck cart, it was quite high, y’know, and then eventually we got a muck spreader, which was a bit easier t’back in. Bit lower, but when you were shovelling muck in from this side and y’mate was doing it from the other side y’learn’t not t’splash each other! [laughs]. If you got splashed y’got worse back. But when y’were on with muck cart, y’had t’take it out every day obviously and y’used t’have to rake it out into heaps in those days g’round the field, so y’d have a field full of little heaps of muck which then you had to go out with a muck gripe [fork] and scale those, spread them out, one of the days when y’had nothing t’do.”

In the winter, they also had beasts housed out in their field barns or ‘outbuildings’ as he calls them and they had to be tended to – let out to water, mucked out and foddered with hay every day.

“Y’had to go down there, let them out t’go t’the river and drink, and while they were drinking you had chance to clean out and shovel the muck though the little muck hole at the back of the building into the midden. And once they got used t’the system, they used t’come back, when they’d finished, used t’come back in, straight in y’know, but y’d just take a little bit of concentrate down and it encouraged them t’come back once they’d had a drink. Start of the winter when y’had t’learn, teach them t’come back in, bit of a chore, but, take a bit of cake down and give it t’them when they’re stood in the building, in their stalls and if they’re a bit lazy coming back, all you’d t’do rattle the tin and they’d prick their ears up and they’d galloped back. And even then, they would have horns on in those days, y’know, in the early days, so they’re all tied up by the neck, and they’ve got their heads down and you’d got t’tie and you’d bend down to get it under the neck, and I mean it’s quite often they’d sometimes lift their head up, but we just thought nothing of it, but when y’try and tie a cow up now, without any horns, y’think, y’wondered how did’y do it, managed t’survive without getting injured” 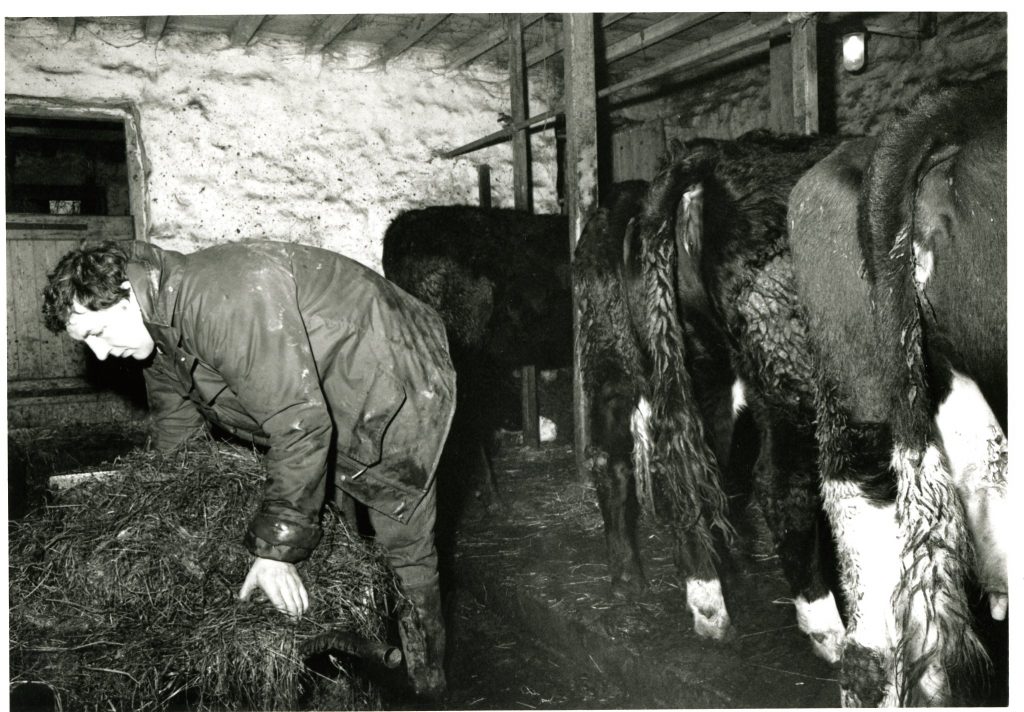 The actual process of milking changed considerably over the years. In this audio clip Mason tells Margaret how in the late 1940s the milking equipment had to be sterilised in a coke-fired steam box after morning milking ready for the hard work of the evening milking session.

By the 1960s they’d introduce pipe-line milking, but still emptied into churns and then eventually they installed a bulk tank which reduced the amount of manual labour even further as he describes in the following audio clip. 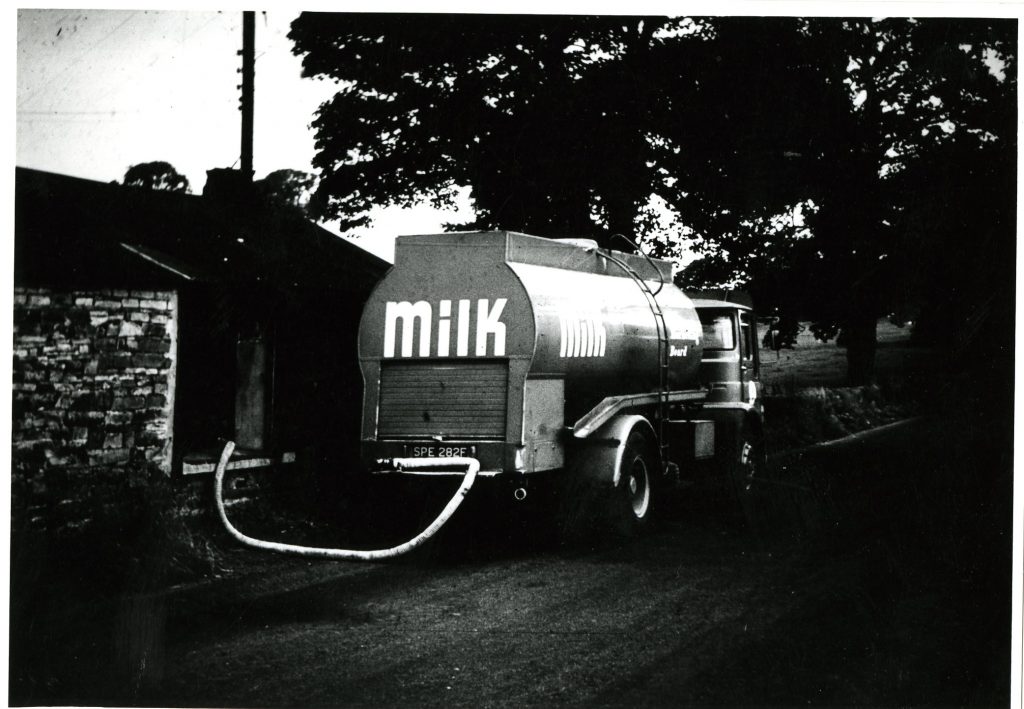 Mason clearly had stories passed down to him from earlier times. Long before the days of the bulk milk tanker, his father had to get his milk in churns down to Askrigg Station by horse and cart to catch the train:

“Well, it was before my time, I weren’t born then, but my father originally lived at Coleby Hall…just the other side of the valley, where father and his brother farmed together there, and this is in the days when the milk was picked up by train, t’go down t’Northallerton or further, so y’had t’get the milk, the ‘ball-gown’ type churns and put them onto the cart and the horse would then take them t’the station, and the horse was so used t’this that if the horse heard the train coming down the track, from Hawes, down there, his ears would prick up. Now, if he got a chance, he’d set off and go, whether the milk was on the cart or not [laughing], ‘cos once he’d set off, there was no stopping him, he knew he had t’be there for the train. And if y’go into the vets at Askrigg…there’s a photograph in the lobby of farmers at Askrigg Station with the old milk churns…I’ve heard tales of milk from Brough Hill which is farm next, down the road just past the Ambulance Station, they used t’have t’come round with horse and cart and milk, and they were a bit late one day and they were galloping along the top here, down the nick, they up-skittled and all the milk got spilled out [laughing] . The fact that the horse knew it had t’be at the station at a certain time, and he heard the train, it would go, if y’didn’t restrain it ‘til you’d got all the milk on.” 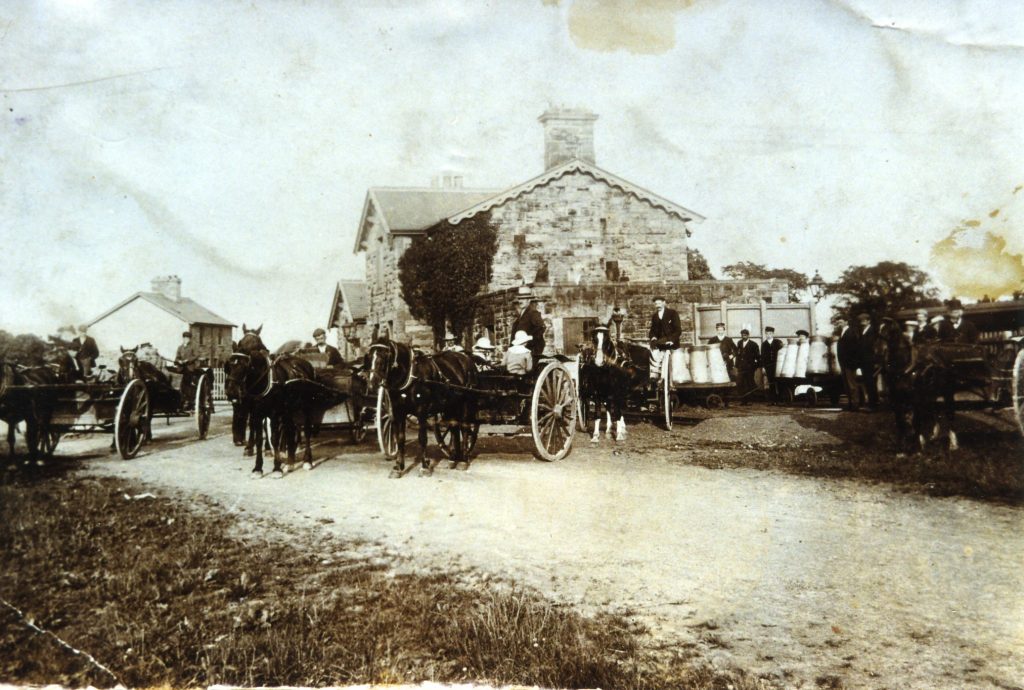 As a child, Mason took a keen interest in where the trains took the farm’s milk which led him into an unwarranted telling off from his teacher.

The railway also brought new feedstuffs in for the cows, wet sugar beet pulp came in large quantities and they had trouble finding somewhere to store it.

“You could get wet sugar beet pulp as well. Straight from the factory undried… It came in a railway wagon again. Which had t’be shovelled out onto your trailer, then brought home and shovelled into store. Trouble was, unless your store was very strong it slumped and pushed the sides out. So had the back of the shed pushed out by that. We inherited a concrete silo, which was for silage [his wife interrupts “during the war”], and it was made of concrete panels, four foot by two foot? And they’re bolted together in a tower. So making silage in them days, bring it up in a cart and fork it in, walk round, trample it, put a bit of black treacle round it…helped t’ferment, y’know…an additive. And then of course y’had t’go in an cut it in winter, cut it out in blocks and suchlike. Well, we moved that into the yard and put this wet sugar beet pulp into that. It started bulging out so put sort of wire strap round it t’stop it collapsing altogether.” 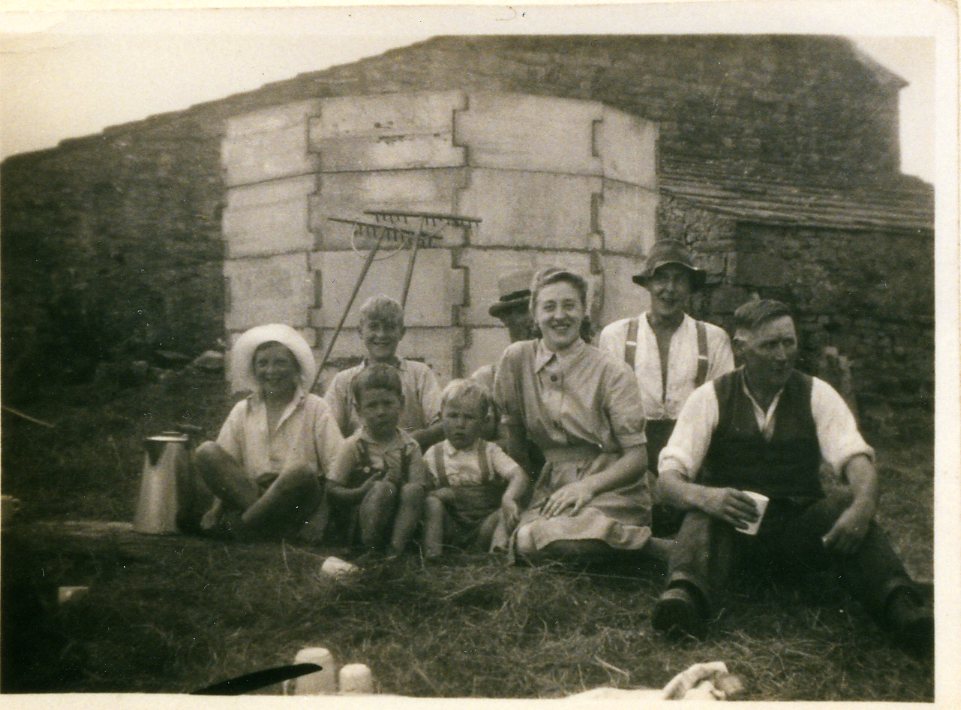 Mason ended his interview with stories about the cows and calves they raised on the farm and how originally he knew each cow by name, one in particular, an Ayreshire from Scotland called Dinah, became very important to the farm.