Thanks to our small army of oral history recording volunteers we are now gathering more and more stories about dairying in Wensleydale. It will take us a while to transcribe them all, but in the meantime, one of our interviewees, Mason Scarr, let us have a copy of a typed recollection from his mother Amy Scarr nee Mason, whose father founded Mason’s Dairy in Askrigg. It offers a fascinating window into yet another small cheesemaking operation in the early years of the twentieth century. It also confirms a story told to us by Janina Holubecki that her grandmother Margaret Hopper shared her college-learned expertise in cheesemaking with local dairies.

Here is Amy’s recollection in full:

“I was born at Lowlands Farm and after the First World War, when Uncle Tom was due to be demobilised after serving in Salonita, my father started making cheese in the fridge house at Lowlands. This was so my uncle had a job to come back to. I don’t know how they heated the milk – probably from big pans in the house. They bought some milk supplies from surrounding small farms and soon they were able to increase their milk rounds and move to Elm Hill. They gathered milk from ‘The Common’, Worton, Abbotside, and Newbiggin etc. on a low wagon pulled by a horse. The cheese was not quite like ‘Farmhouse’ being deeper in colour, but it was very good and very rich.

In 1922 my father arranged a swap between Lowlands and Holmedale with Mr J Hodgson as Mr Hodgson had a son who wanted to farm. When they moved to Holmedale where they were able to have two large vats and better equipment and a good range of piggeries. Although still in the village we were set back from the main street – though I sometimes wonder  what the neighbours thought when the wind was in the east. But people in those days expected country smells.

My part time job was to bandage little cheeses and churn and make butter, which was taken back to the cellar at Elm Hill. When I was churning, turning a big handle, I used to learn my words for the Easter play. I never had a wage. I had to scrounge what I could, selling a small cheese or a little bit of butter. Having a keen sense of smell, I was sent for to sniff at any suspicious milk. Any doubtful milk was fed to the pigs, which were our main source of profit. My other job was as housekeeper to father. 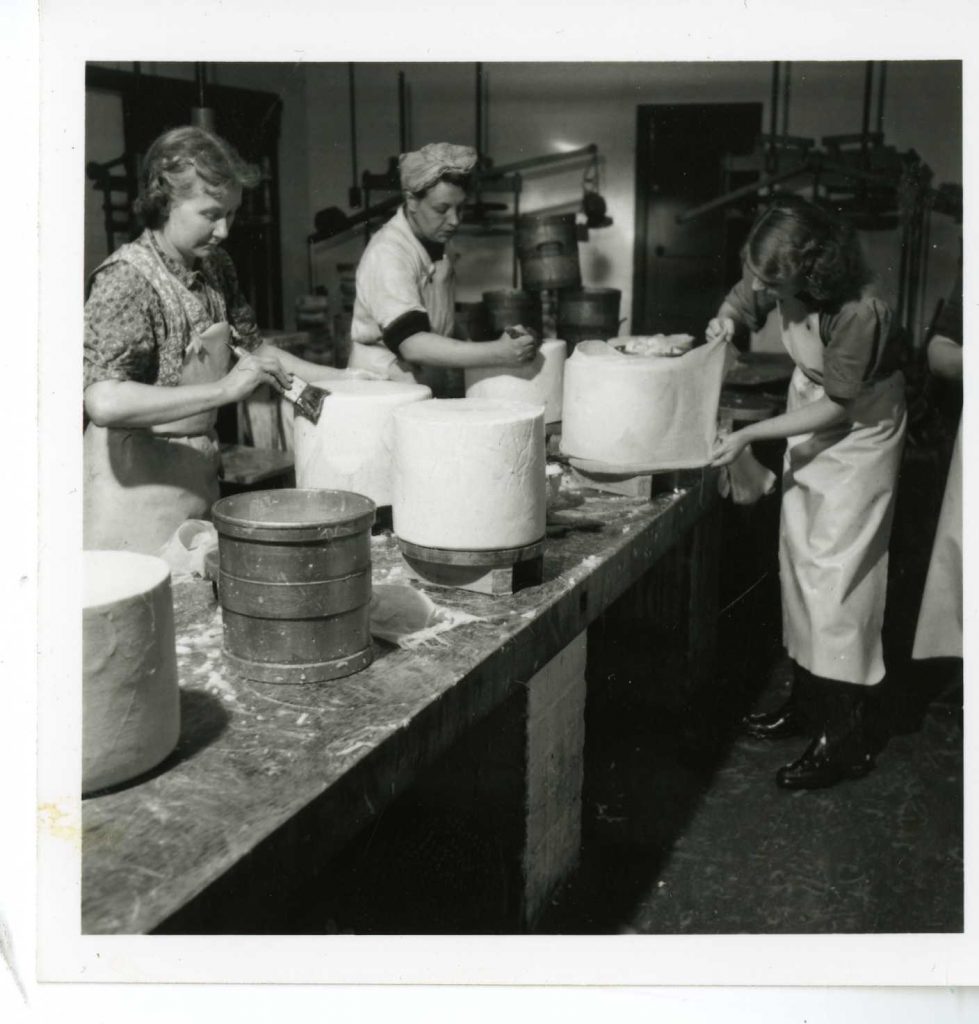 During the recession of the 1930s I remember my father hiring a large square shaped van and filling it with cheese. He took it to Yarm fair and sold it for 4p [d?] a lb. Kit Calvert dumped his on the moors and gave some to charity. The milk was bought at 6p a gallon and a lb of milk [she actually means a gallon] made a lb of cheese. The whey went to the piggeries. Every available chamber was filled with stock and the rats had a field day (or rather months). Eventually the Milk Marketing Board was formed and things began to improve. I remember Uncle Tom, saying they were £600 in debt (which was the price of a house).

Then came World War Two and great changes. Rennet was ‘out’ and something called starter was ‘in’. Mrs Hopper helped us to introduce this. The cheese had to be ready for despatch in three weeks and more whey had to be pressed out. We were now making up to 1,000lbs of butter a week and we always used Fred Bell’s milk as it seemed to have the most cream. Many years later I learned that ‘the bottoms’ herbage was rich in iodine with many wild flowers. (Judith Bromley [pers comm]).

The milk from one small herd was considered ‘no good for cheese’ as, my uncle said, ‘the cowshed was far ‘ower’ clean’ (Uncle Len Gill). It looks as if spiders and bacteria hold some secret in cheese making. Something to do with penicillin and mould?

The first cheeses were bought by Whitelocks of Stockton. Old Mr Whitelock ‘travelled in biscuits’ and remembered Uncle Tom who served his time in the local grocers (John Gills). On Mr Gills recommendation he called on Uncle Tom and bought his first consignment. The other dairies were not slow to catch on.”

Amy mentions her father taking cheeses to Yarm during the Great Depression. Yarm Fair was an extremely important outlet for cheese made in Wensleydale. We have been lent this photograph of a  grocer and cheese-factor from Bainbridge called John Leyland, selling cheese at Yarm in 1934. He would fill his ‘ancient Austin runabout called Jane’ with cheese for the fair apparently. 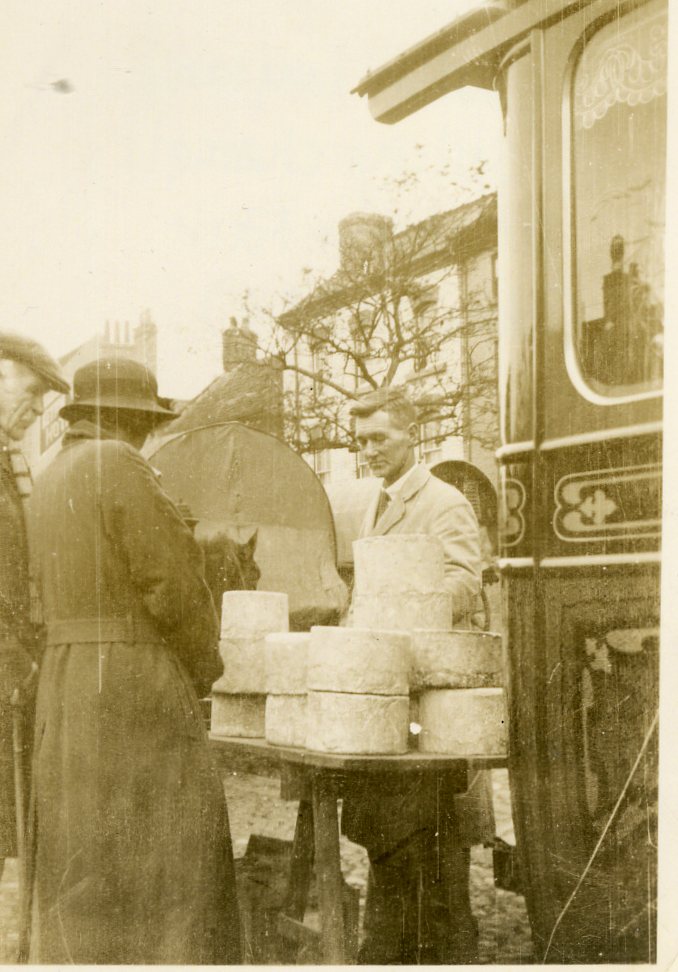 The workers in the industries of the north east particularly the coal miners of County Durham and the ship-builders and steelmakers of Middlesbrough, Stockton and Hartlepool were large consumers of Wensleydale cheese. It turned out Yarm was very well situated to supply them. Mason’s Dairy also did well to forge an early link with a wholesale supplier in Stockton.