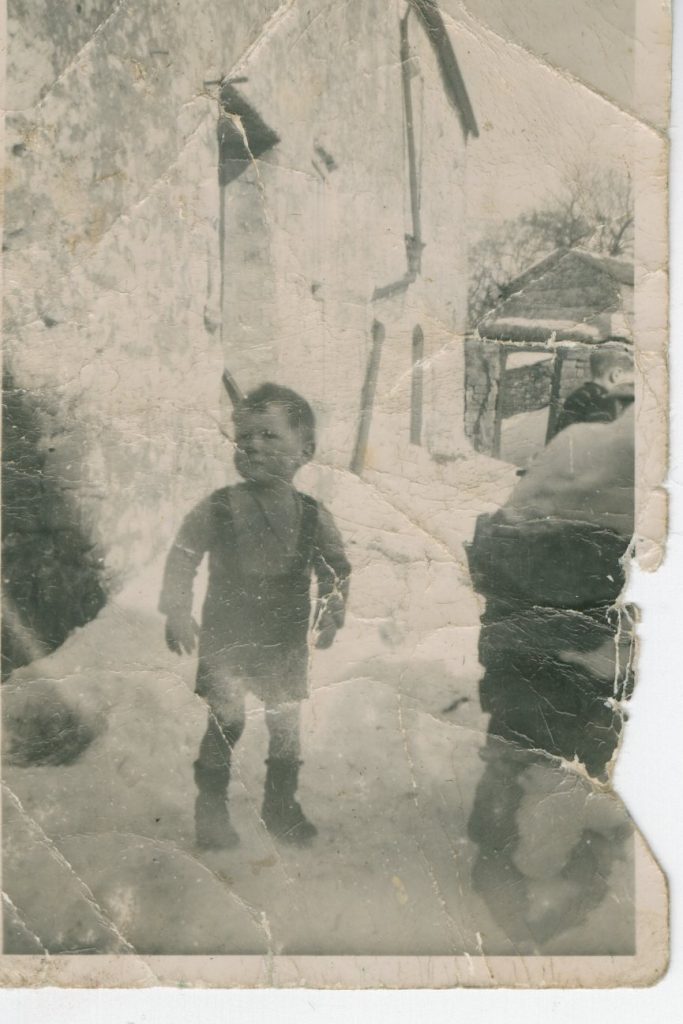 Alan was born at West End Farm in Marsett in 1945 and has early memories of his father hand milking the family’s cows there. One in particular was a bit of a pet, but as Alan recalls in the following audio clip, you always had to be a little wary around cows however tame, especially ones with horns:

As a boy in the late 1940s, Alan also remembers butter making in the farmhouse:

“M’mother used t’make butter, yes. I’ve recollections of sitting by the fire churning this butter…[for how long?] about twenty minutes…just for home consumption. I think in 1947 when they couldn’t get the milk away, they had a go at making cheese. I don’t know how successful it was.”
Alan Pratt (73), formerly of West End, Marsett and Studdah Farm, Bellerby

As with all the dairy farmers we’ve interviewed so far, the industry naturally moved  from hand to machine milking during the first half of the twentieth century. The Lister engines they used to operate the vacuum lines must have been ubiquitous throughout Wensleydale at that time.

“And from hand milking, we progressed to a stationary Lister engine and a vacuum line and that was all very well as long as you could start this engine. If you couldn’t you were stuffed [laughs]. And from then we progressed to pipelines, where the milk travelled from the cow to the churns or the bulk milk tank, and from there we sort of progressed to milking parlours where we are now.”

Alan showed our interviewer some old stock records of his father’s which offer a fascinating glimpse into the economics of cattle keeping over time as recorded in this audio clip:

Alan’s father eventually sold up at Marsett and bought a farm near Bellerby, called Studdah. Alan describes how poor the climate was up at Marsett, with the wet summers being one of the reasons for the move:

“And we moved to a farm at Bellerby which father bought in 1964 for £17,000 which doesn’t seem a lot of money now, and we’ve been there ever since. And the climate is much better down here, we wouldn’t move back.”

The milk from the farm at Marsett went to the Express Dairy in Leyburn, but  the milk from Studdah goes to the Creamery in Hawes to be made into cheese:

“…it was a lifeline at the time. We were selling milk t’Milk Mark, they went bust, cost us a lot of money, about £50,000. We were sort of stuck without a buyer, a group of us approached the Creamery and they took us on, and we were very grateful for it.”

Having already coped with this disaster, the farm took another blow with the outbreak of Foot & Mouth in 2001:

“We lost everything…my wife doesn’t like talking about it. Yeah, we were left with one sheepdog and seven hens…from 150 cattle and calves, over 100 sheep…it was like being in a war zone actually…we were nine months without stock, and it’s a bit eerie, y’know, the yard so silent…we purchased fifty good pedigree cattle from herd in Lancashire, and we’ve bred up, bred up ‘til then today we have 250 head of stock including calves, but we’ve no sheep…we take sheep in for winter, my lad hates sheep [laughs].” 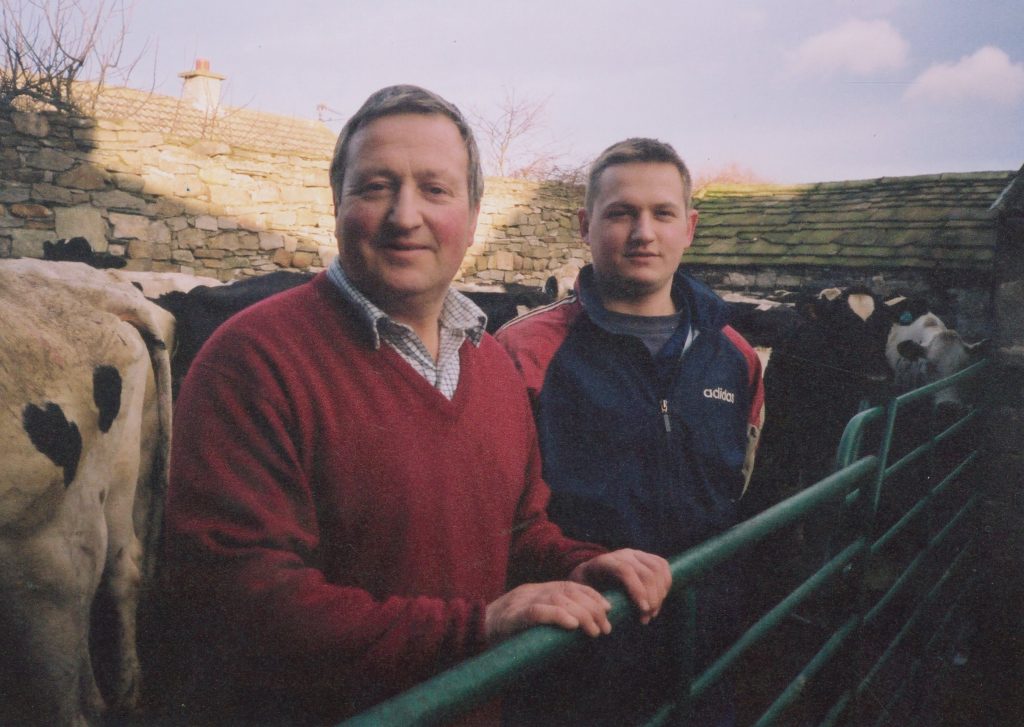 Alan Pratt and his son Richard at Bellerby, 2002. Courtesy of Alan Pratt

The farm at Bellerby has an interesting link to the far distant farmers of the Iron Age with the discovery of several beehive querns in the fields, which Alan proudly showed us a photograph of. Primitive cereals would have been ground into flour using these rotary stone querns by the people that once farmed here 2,500 years ago. 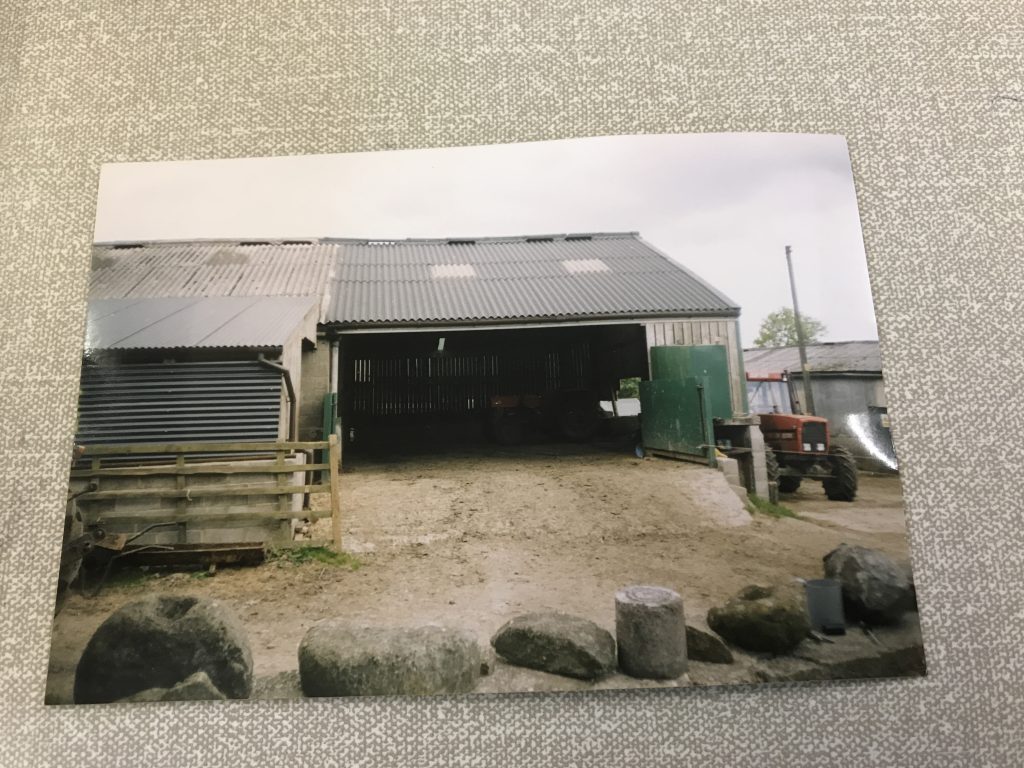