Two of our oral history interviewees, Alan and Edith Pratt, came along to meet us at our Open Day last September in Askrigg. They have their own fascinating dairying stories to tell which we’ll publish here shortly, but Alan also gave us a copy of a typed manuscript containing the recollections of early twentieth century farm life at the eastern end of Wensleydale by his father Jim Pratt.

We’re not sure who wrote them down, as the name is illegible, but it seems to have been done for an event or perhaps a talk to a local history group. We’ve copied them out and here they are NB Friar Ings is a farm east of Bellerby:

“Pratts have farmed at Studdah for 28 years – me then son, Alan, after me. But I had had my eye on Studdah before that because as a lad I came to work at Friar Ings. My parents farmed first near Bury in Lancashire, but they didn’t like it over there and hankered to get back to Yorkshire.

So we moved to near Hebden Bridge. I was a young man there and I used to come up to Friar Ings, which was farmed by a cousin of my mother’s, for haymaking every year. Mostly I came all that way on my bike – but once I came on the bus. I got a bus to Halifax – from there to Leeds (I had a Chinese meal in Leeds – it was awful and I’ve never touched Chinese food since). Then Leeds to Skipton, then Ripon, then on to Leyburn – it was a long ride.

Then I came to work full time and live at Friar Ings (I had had a good job working on the reservoirs at Halifax until they were finished). I well remember walking up Mill Lane to the shop in the village [Bellerby] to buy a packet of woodbines and a bag of sweets – and walking back in the dark.

I had my twenty first birthday at Friar Ings and worked there for nine years. But I was bitten on the arm by a horse once when I was leading muck and I had some kind of blood poisoning and it took my arm seven years to recover.

While I was at Friar Ings father came from Hebden Bridge to farm above Semerwater. I married a girl from Garriston and eventually we got a farm at Marsett and we were there until we moved to Studdah.

It was hard work in those days. You started at half past five most mornings. We only milked ten cows and always indoors. Our milk went to Catterick Dairy and later to the Express Dairy at Hawes [?]. Again there were shorthorns until we began to introduce Fr[i]esians. In fact we had the first Fr[i]esian bull in this area at Friar Ings – it was a young bull and it came from York. I met it at Leyburn station and led it all the way to Friar Ings. It wasn’t a bad bull and the journey was not hard.

One of my most vivid memories is the terrible Winter of 1947. We lived 4 miles from Bainbridge. When the snow came it stayed with us for nine weeks and it was higher than the dry stone walls. We managed to get all 250 of our sheep in before the worst of the snow. Of course during the Summer you got together enough feed to last your stock through the winter but we never expected nine weeks of snow, so we ran out. 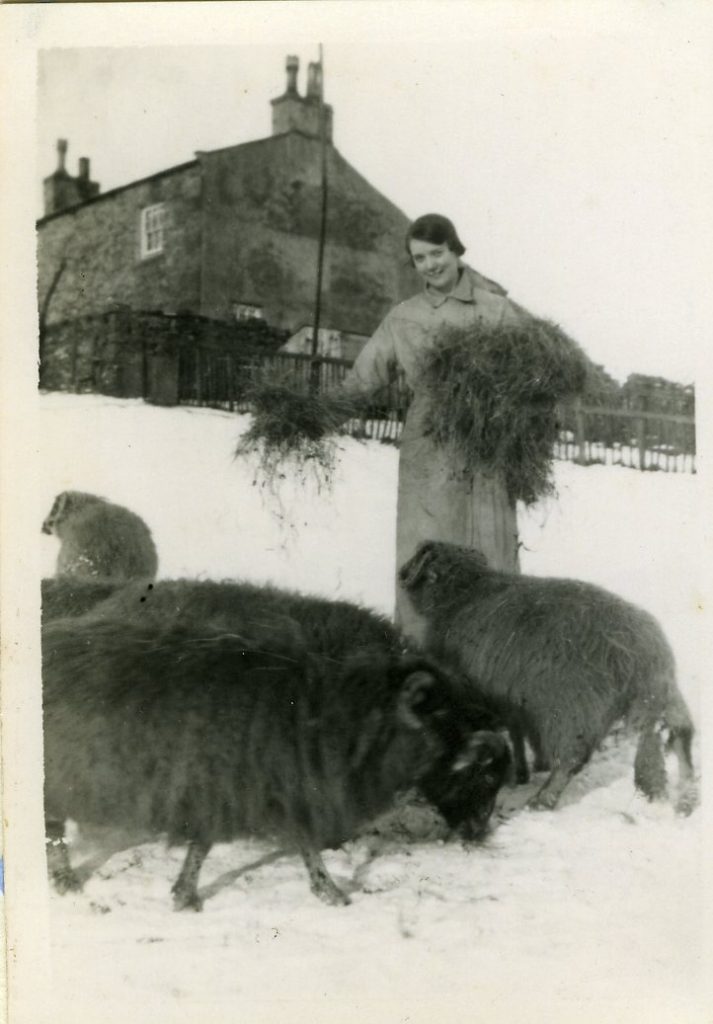 A man from the War Ag – Albert Smith – used to bring loads of fodder to Bainbridge Green three or four times a week and I used to have to take the horse and sledge the four miles to get the feed. We had to let the cows dry off – there was no point in milking them. In the first place we didn’t have the time – and in any case the milk couldn’t get through. We had two big churns on the stand for a fortnight and when we got to them they were frozen solid. We thawed them out in front of the fire and had a go at making cheese with them. We only lost one cow – but the sheep – that was a different matter.

When the thaw came the sheep went mad. There were a lot of bushes at the top of Semerwater and they were showing green  the sheep all dashed off to get at the bit of greenery and the marshy ground was saturated. Hundreds of local sheep died/drowned. We lost 150 from our 250. Dead sheep from the surrounding farms were put in a pile which was higher than a house. They were fetched away a few at a time. And out of the 100 we only got forty lambs that year because of course they had all been in lamb at the beginning of the winter. You couldn’t even replace them by buying sheep at the mart because hardly anyone had any sheep to sell and any came up for sale were snapped up immediately – so it took several years to build up the flock again. I never want to see a winter like that again.

At haytime we used to hire Irishman at Hawes to help with the hay. We had the same one for several years and he was terrified of sharpening his scythe I always had to sharpen it for him. But he was a good worker. He came and stayed and we paid him £60 a month and his keep. A good wage in those days but workmen were hard to come by and we had to pay it. 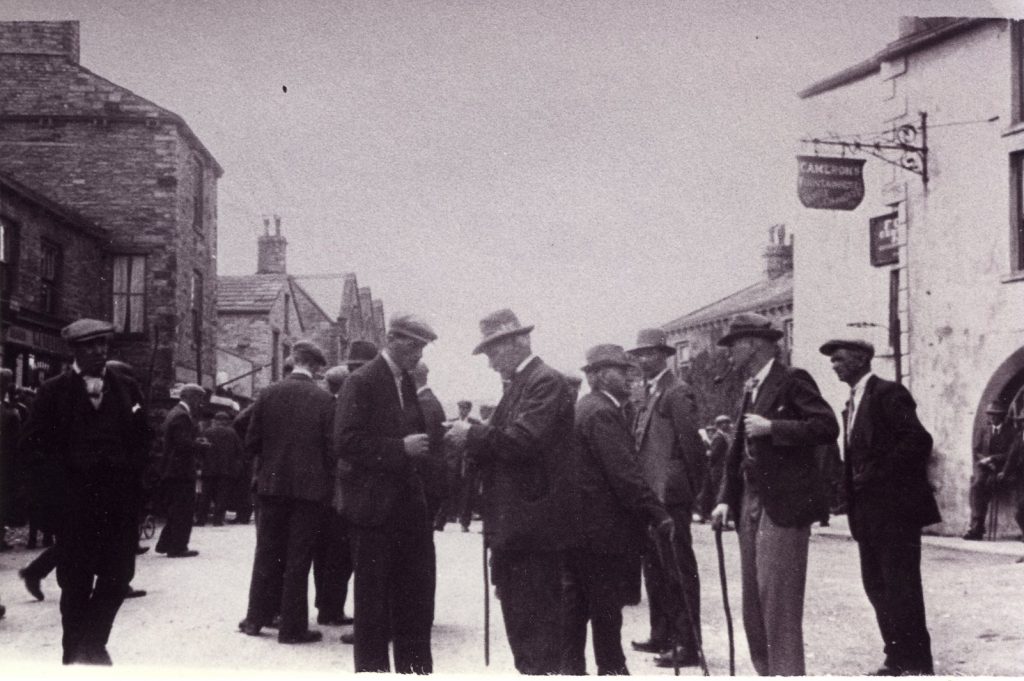 We only kept one horse and if we wanted another as we did at hay time when we needed two horses for the hay cutter – we hired a horse from Metcalfe’s in Hawes. It was always as well to use a double horse grass cutter but often you know two strange horses didn’t get on. Then it was hard work. 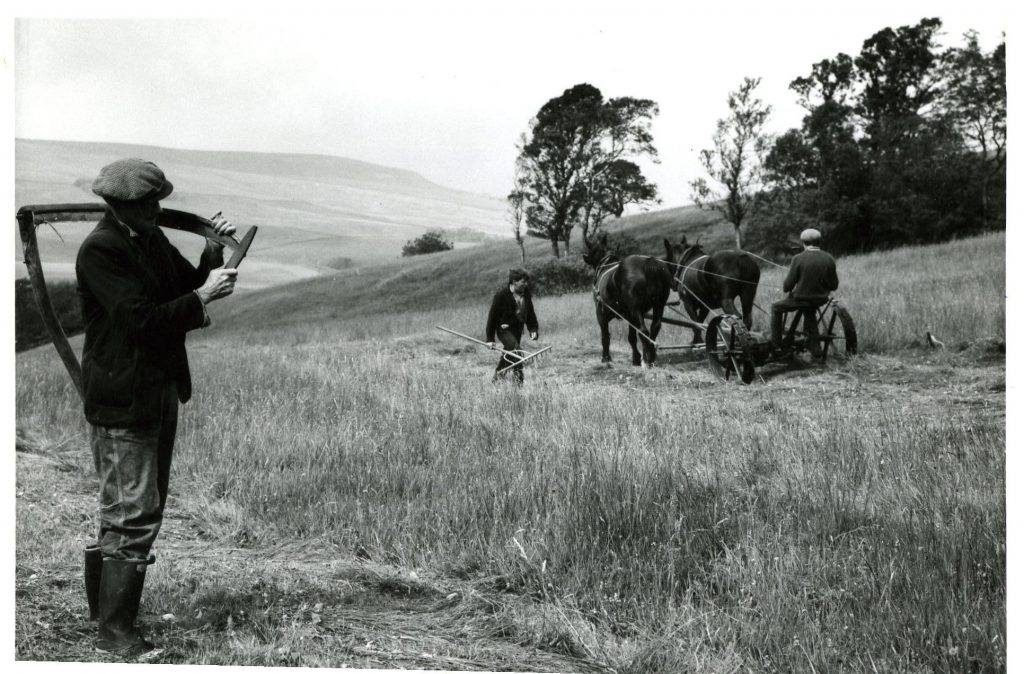 Driving stock to market was a long job as we had to drive them by hand to Hawes and it was a long way. Then in the early fifties Jack Metcalfe got a cattle wagon and we used to pay him to fetch our stock and take it to market.

It’s interesting that we started in the dales using Mr Tallantyre the vet at Bainbridge and all these years later we still use the same practice – now its Metcalfe and Hurn.

Farming is easier now, but I don’t personally think that the quality of meadow is as good. The pasture for grazing might be a bit better than it was in the old days, but the meadow is nowhere near as good. They put too much fertiliser on these days and it doesn’t eat as well. The herbs and the wild flowers are missing. Buttercups only look nice, they do nothing for the hay crop – but not so with other wild flowers and herbs. You know what the hay is like from the way the stock are – a good, sweet hay – the stock go mad for it. They might get more of it these days but in my opinion it’s not such good quality. 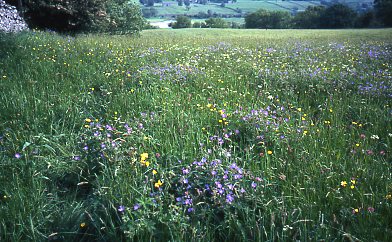 Another thing about the work being easier – in my day the milk churns held 12 gallons [‘17’ crossed out] – [‘and by my reckoning that’s nearly two hundredweight’ crossed out] – you had to be good strong men to carry one of those.”

3 Replies to “Recollections of Jim Pratt of Studdah Farm, Bellerby”