Harper’s Dairy at Low Mill and its dairymaids

We’ve already written about the nineteenth century cheese factory founded in Hawes by Edward Chapman in the blog post ‘Early factory production of cheese in Hawes’ but we’ve now gathered some information about another early factory, this one located in Bainbridge at Low Mill and known as Harper’s Dairy. The name is interesting because a well-known cowhouse in Liverpool had the same name – read more about the Harpers in Dave Joy’s blog. 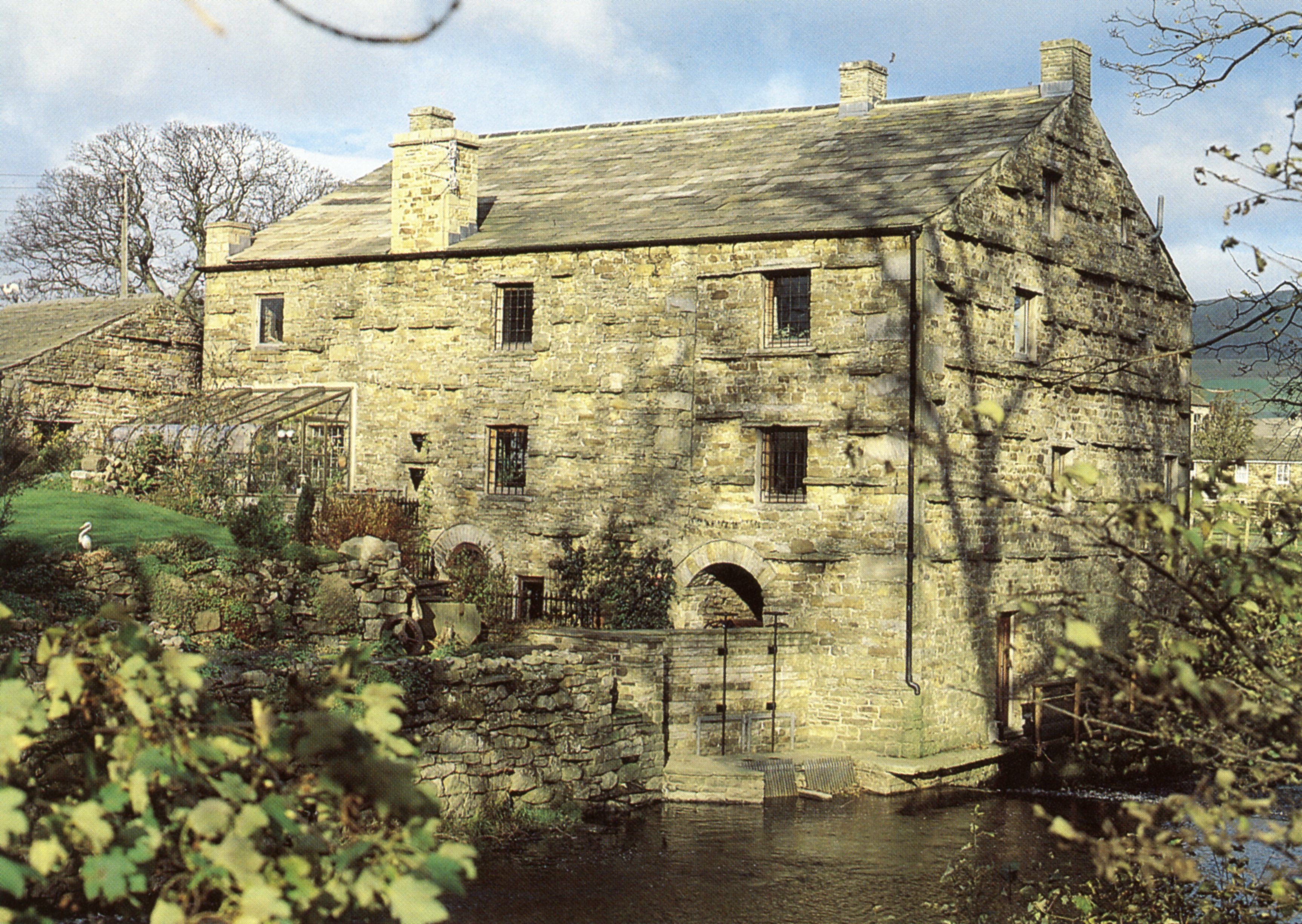 Low Mill started its life in the late eighteenth to early nineteenth century as a water-powered corn mill. According to a village walk booklet it was probably the last corn mill in the village but ceased work on the death of one Richard Cockbone in 1875:

“The fabric of the mill shows four distinct phases of building even though it is said to have been completely burnt out in 1830. Parts of the corn drying kilns survive. So too, do original millstones and machinery dated 1847 and 1877.”

Today it is an award-winning guest house and the Low Mill Guest House website shows that some of the corn mill machinery is still preserved inside. However, we now know that it had another function in the early years of the twentieth century, as a dairy, making Wensleydale Cheese and also, according to historian Christine Hallas, sending liquid milk to Askrigg Station.

“An analysis of accounts at Askrigg demonstrates the importance of the railway for dairy farmers. In 1925 Askrigg station held accounts for handling milk from 12 local farmers, from Mason’s Dairy, Askrigg, and from Harper’s Dairy, Bainbridge. Four years later Harper’s Dairy closed which resulted in four more farmers forwarding their milk direct from the station.”

We know that Margaret Hopper nee Moncreiff worked there in the 1920s having trained as a dairy maid at college in Cheshire. We have this wonderful photograph of her outside the mill in 1924. 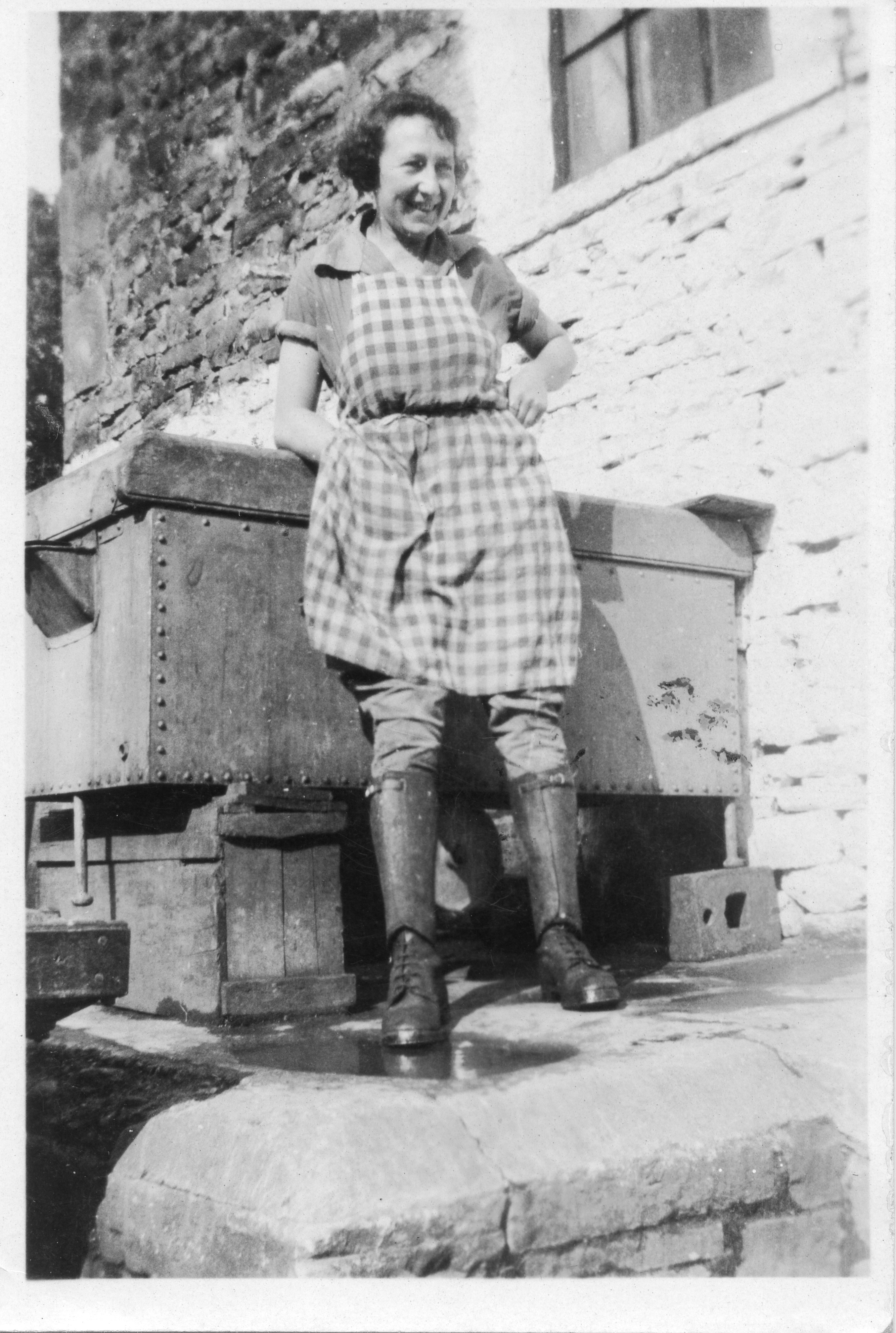 We assume she is standing on a loading platform where the milk churns from local farms would be delivered off the back of carts or flat-bed lorries each morning or forwarded on to the railway.

This photograph seems to have been taken in the same spot and shows a colleague of Margaret’s called Kay Stacey and is dated on the back 1924/5. 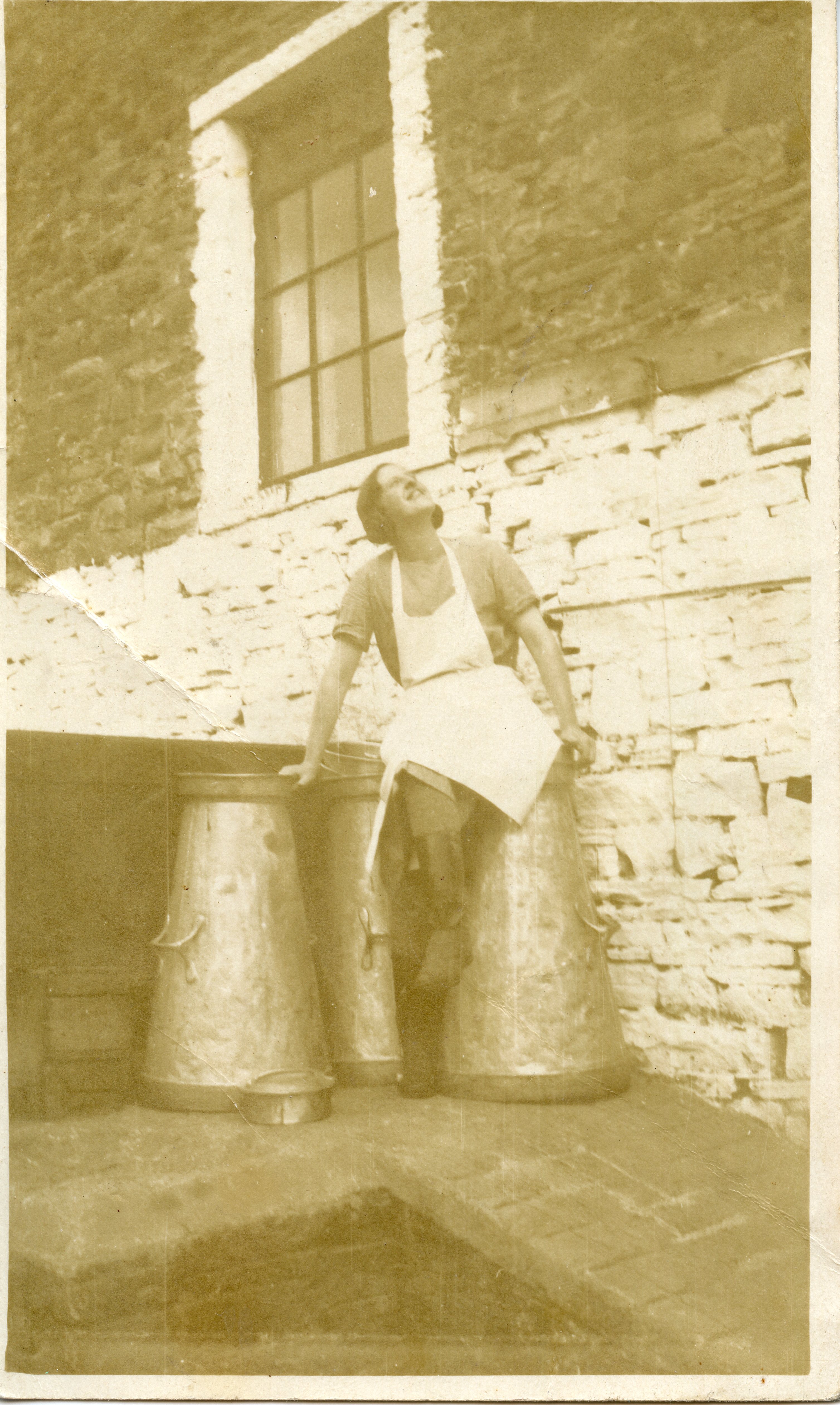 She is perched on the older style of conical milk churn which we’ve learned was the property of the individual farms rather than the dairy. Notes supplied with the two photographs state that the factory was making Wensleydale cheese.

We were put in contact with the current owners of Low Mill by Margaret’s granddaughter Janina Holubecki and they have just sent us another photograph taken at the mill at around the same time – this one shows two dairy maids on the upper floor at a loading window. The woman holding the hook hanging down from the pulley wheel looks very like Kay Stacey but we don’t know who the older lady beside her is. 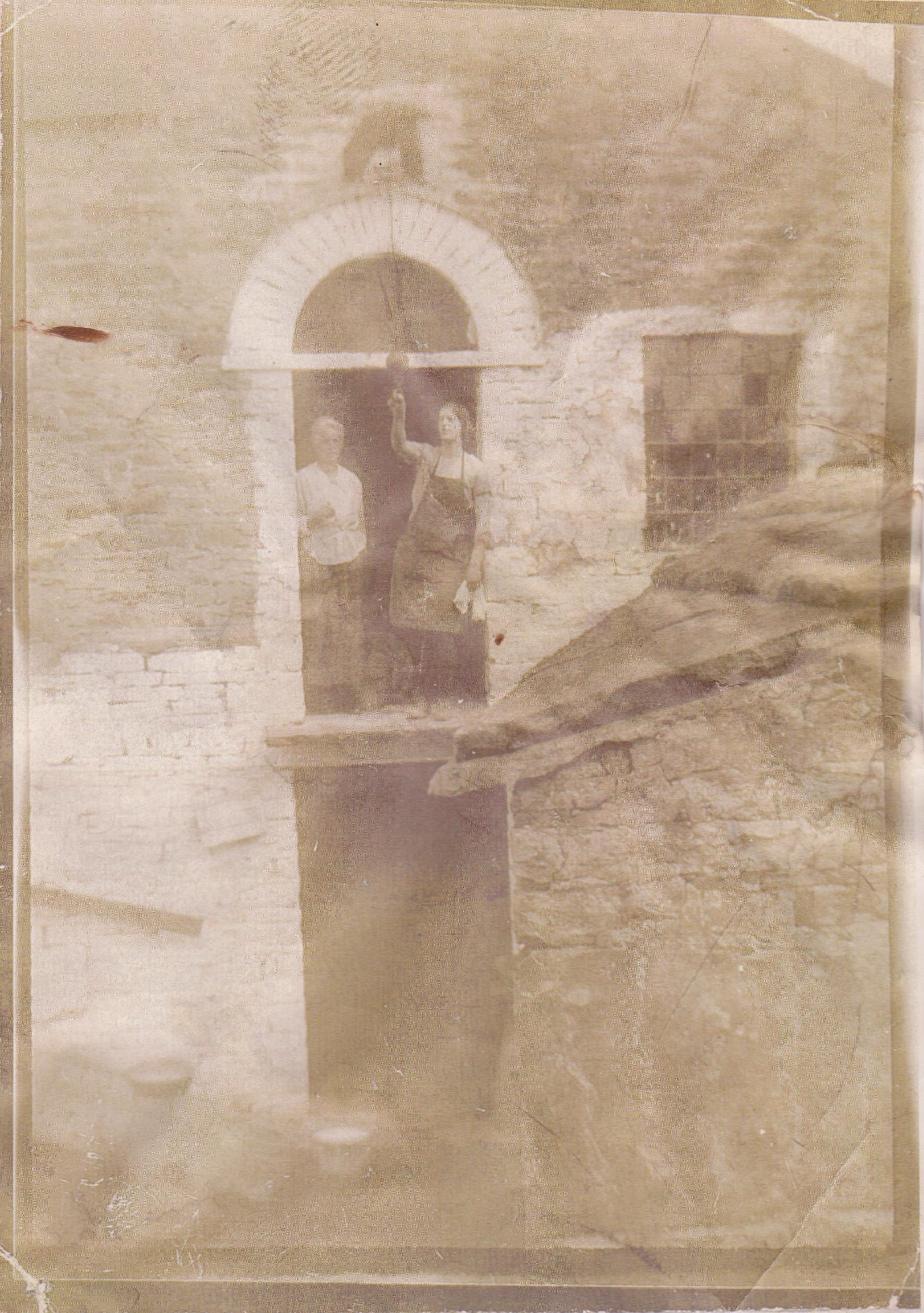 As yet we don’t know a great deal about the history of the factory. Kit Calvert describes several small village factories – Bainbridge among them – being set up in the Yorkshire Dales after the First World War buying milk cheaply off farmers who had been let down by city buyers.

“Sometimes buyers arrived with too little capital and offered good prices for milk on a six months contract, only to find they had bought too heavily or too dearly and occasionally before the contract was half through they either broke their bond or went bankrupt. It was when this happened that the factory owners came to the farmer’s aid. The offer they made for milk bought under these conditions was generally much less than the price promised by the city buyer, but it was an avenue of escape to the farmer. From milk bought like this the factory owners often reaped a golden harvest, but it must also be admitted that without such harvests they could not have stood up to their city competitors.”

He writes that most of the village dairies just about survived the competition for liquid milk with the city dairies and the economic depression of  the late 1920s but that Bainbridge and small dairies at Thoralby and Redmire had to close. And as we’ve already seen above, Christine Hallas places the closing date of the Bainbridge dairy in the year 1929. This doesn’t give us a very long window of activity at Low Mill if we consider that the photographs we have are clearly dated to 1924.

As we also see from our three photographs, Low Mill’s workforce had at least three dairymaids, one of whom was college-trained. Kit Calvert supports the notion that even as cheese-making began to leave the farmhouse and move to the factory, it was still being made by women in the Dales.

“The dairymaid in the factory has many advantages over her farmhouse sister which enables her to make a good Wensleydale cheese, although it must be admitted she may have certain difficulties to overcome. It is not always an advantage to have the milk from thirty or forty farms poured into one 500 gallon vat, for…some farms are peculiarly adapted for producing milk which will make a good cheese while other farms are by no means ideal”

By 1946 when Kit Calvert was writing the ‘Story of Wensleydale Cheese’, only nine farmers (or rather their wives, daughters and dairymaids) were registered with the Milk Marketing Board as still actively making cheese on the farm. Kit Calvert continued to employ women in his factory even after the Second World War as these photographs demonstrate. They show a woman called Mary Alderson and colleagues at work in the new Wensleydale Creamery premises opened by Kit Calvert in Hawes during the 1950s. Photos courtesy of Mary Dinsdale. Photographer possibly Bertrand Unne. 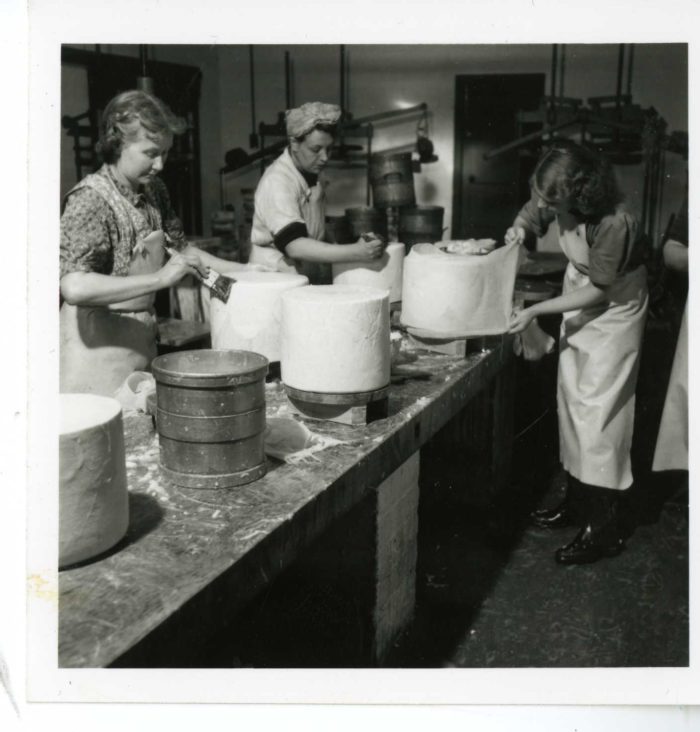 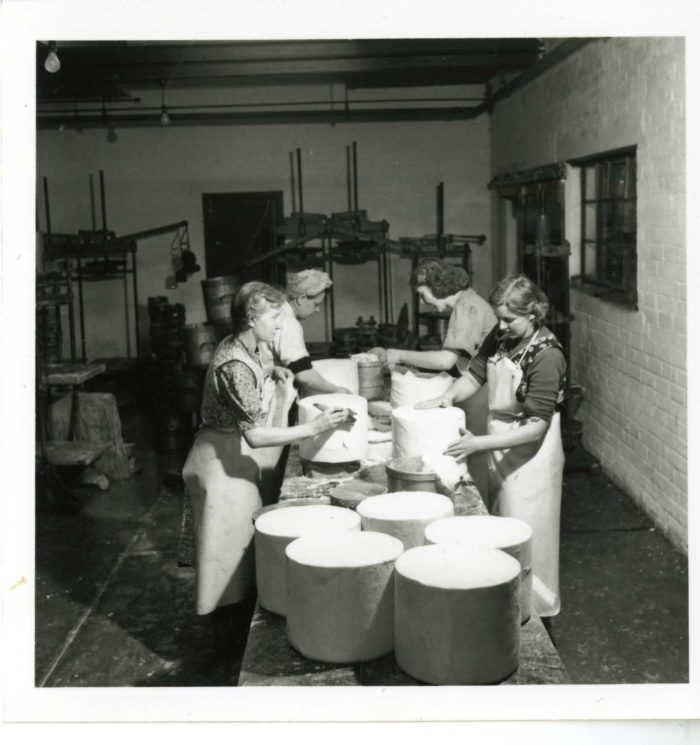 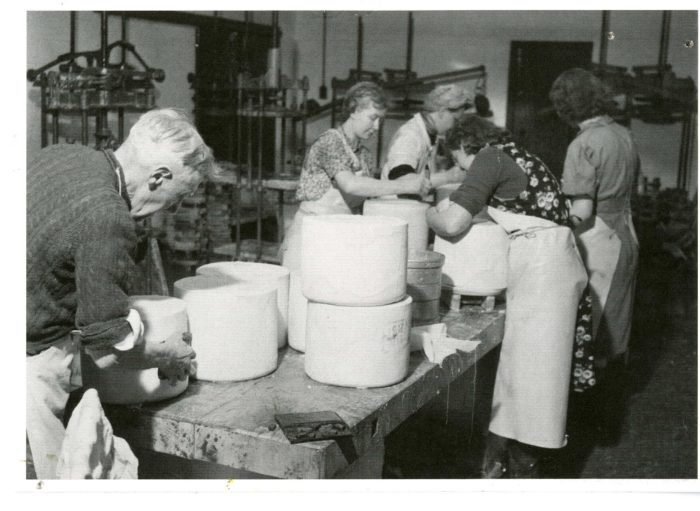 UPDATE The lovely people at Low Mill Guest House have just sent us a photograph showing what the side elevation of the mill looks like now – you can clearly see the upper loading window with its arched head and pulley apparently still in place. The stone-built block and the ramp  up to it where Margaret and Kay were photographed with and without milk churns was where the green garage doors are now. The feature seems to date from the time of the dairy as it effectively blocked off the original entrance into the corn drying kilns. The owners also told us that the original part of the mill was built in 1797. 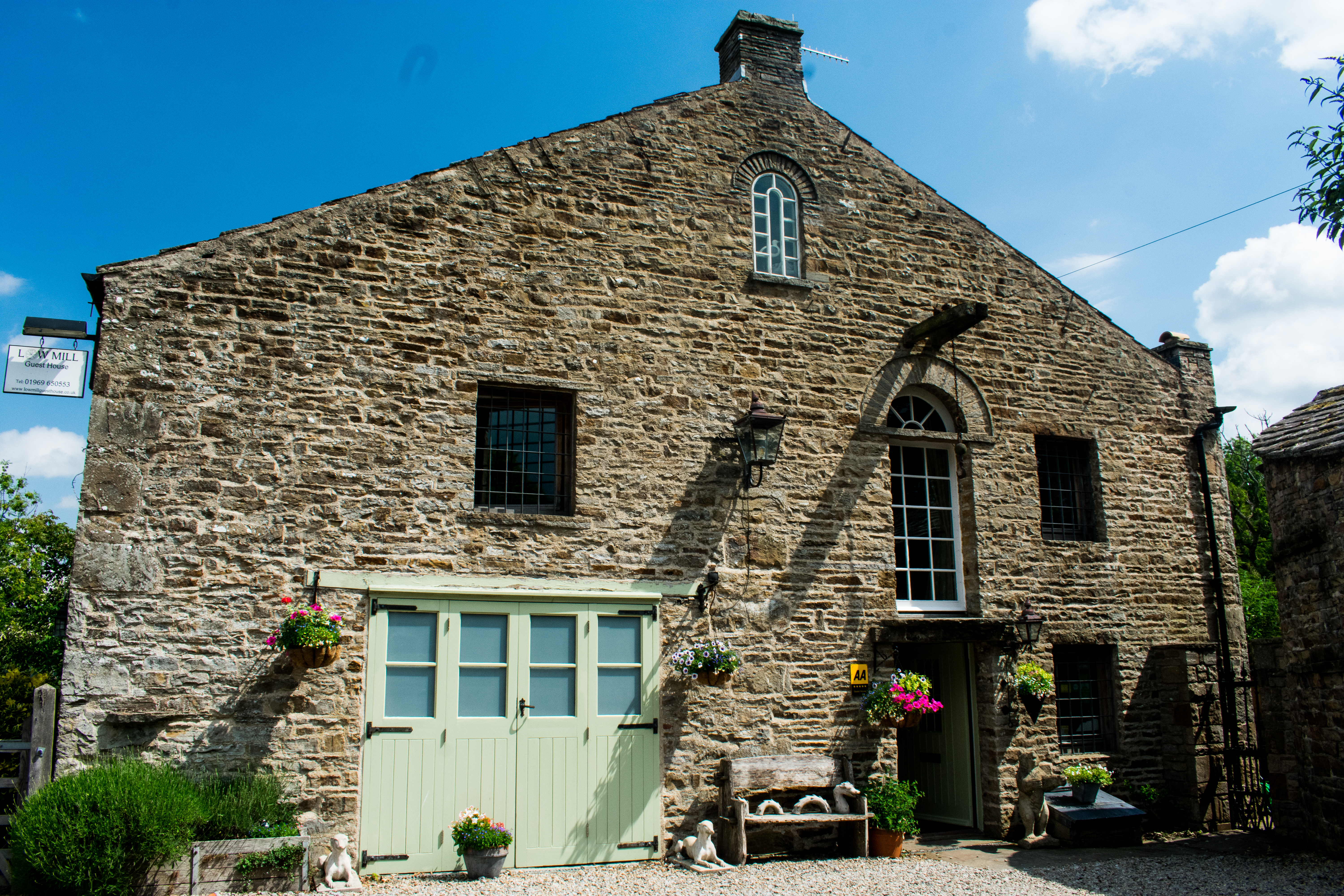