In April Orton Primary School got a chance to explore some of the archaeology of their village. Two test pits were excavated in Orton as part of the developmental phase of the Westmorland Dales Landscape Partnership (WDLP). These were continued the next day as part of the WDLP forum event.

The day started with Rachael Alderson (the Young Rangers Officer at YDNPA) and myself leading the assembly. Here we explained a bit about what archaeology is and what our jobs entailed. This is something the school encourage to enable children to know about the variety of options they have for the future and the different pathways to get there.
All the children from reception to year 6 came out on site, about 70 children in all, and had a go at both digging and sieving. They all seemed to have a great time and were very enthusiastic. It wasn’t the easiest soil to dig being quite clayey, with one child comparing it to play-doh, however this didn’t dampen their spirits. We were very impressed with their interest and their imagination. 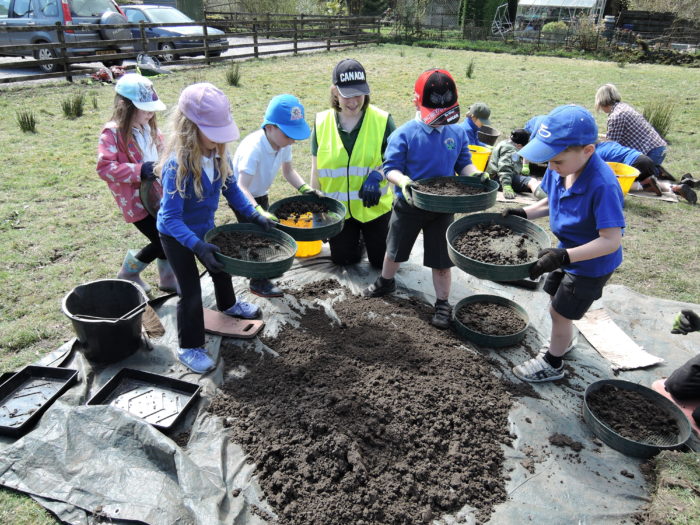 The children had the chance to try sieving as well on the site, however this was difficult due to the nature of the soil. Photo copyright Orton C of E Primary School

These test pits were continued on the next day as part of the WDLP’s forum event. Several children returned to see how the test pits were developing and what else had been found. It was also a good opportunity for them to show their families what they had been doing the previous day, as well as what they had found. Residents of the village and visitors also stopped by to ask us what we were doing.
The morning of the forum event consisted of talks and presentations that celebrated the landscape and a number of heritage features of the Westmorland Dales. After lunch there was a circular walk around Orton looking at different heritage features. This included viewing the test pits and finding out more about this method of archaeology. They were also able to see some of the finds on offer. The test pits will hopefully highlight an interest in developing similar work in the delivery phase of the project. 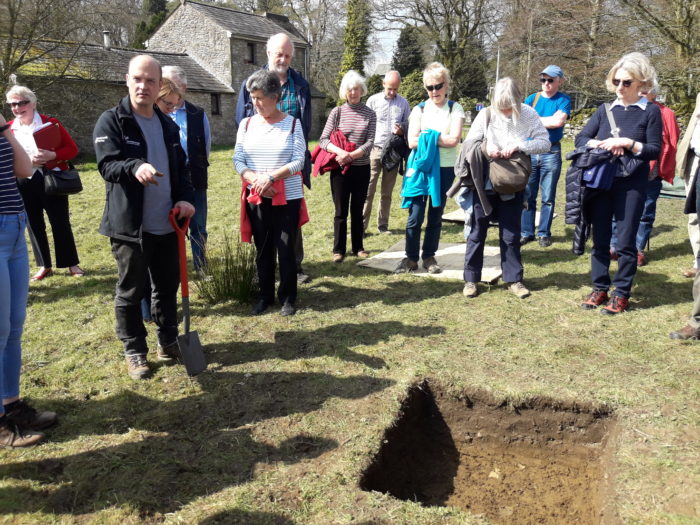 Miles Johnson, the Senior Historic Environment Officer, explained to the walking group what is involved in a test pitting project

Test pitting itself is the digging of 1m square pits that are excavated in 10cm spits. Test pits are placed randomly, however for some projects they are arranged in a systematic way. A lot of people asked us why we picked the site we did. In this case, the site was primarily determined by locating somewhere that was suitable for the schoolchildren, and which was also on the route of the walk for the forum event. Before we excavated the site we looked it up on our Historic Environment Record – we had no knowledge of anything previously being located there and we knew it had not previously been excavated.
We only dug two test pits as a pilot exercise, however projects would usually involve digging a large number of test pits (ideally 25-30 minimum), spread throughout an area (for example a village). Their main purpose is to provide an insight into what human activity has taken place in the area, including potential patterns of where and when the activity has taken place. They are also a great way to involve a lot of the community, including children, and especially those who have never done archaeology before.
The two test pits unearthed a fairly typical range of material, including some modern glass, post medieval pottery, evidence of burning, iron nails and part of a metal boot sole. The children on site got very excited about the first find which was a Canadian one cent coin from 2004. Interestingly there were also some small pieces of worked flint and chert excavated from the test pits. Whilst these were not very informative, they do suggest that prehistoric activity was taking place in the area. 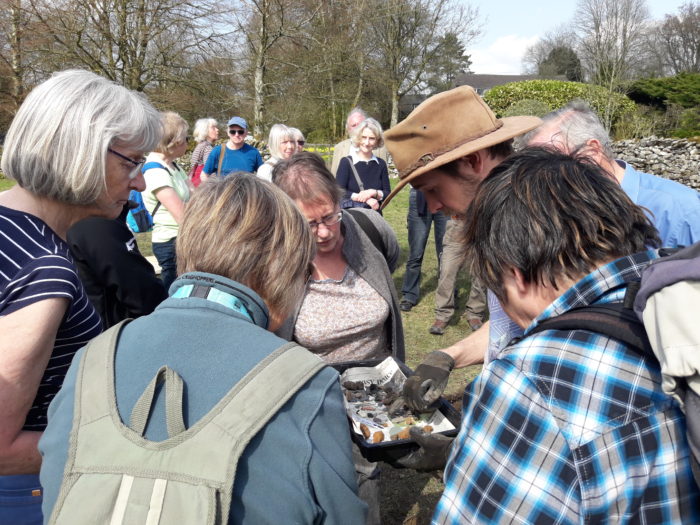 We want to say a massive thank you to everyone who came along, and especially to all the children who did such an amazing job.