Sally is one of our oral history recorders but the roles were reversed last year when Margaret Townsend recorded her talking about her  happy childhood on a farm in Walden. 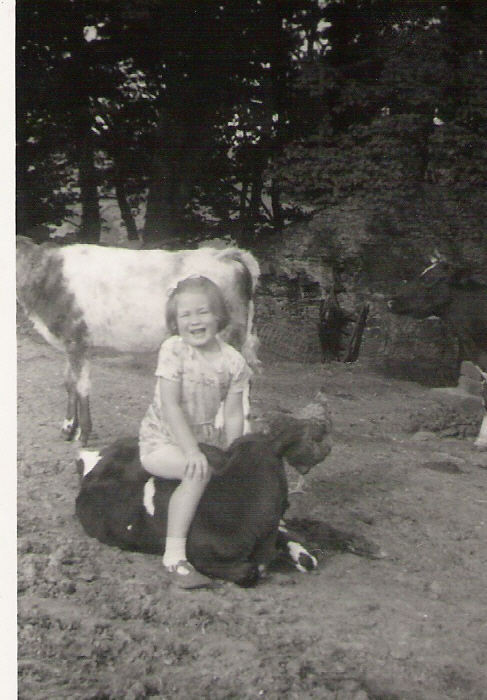 Sally’s father had been brought up by his grandparents after his mother died of TB when he was very young. He started his working life as a farm labourer for his uncle John but when Sally was two, he took over the tenancy of a farm in south Walden called Nell Bank. She tells us that this must have been quite a step up for him.

From 1954, two years before his move to Nell Bank, he kept a diary which Sally now has. He records in short, but fascinating entries how he prepared for the move up to Nell Bank. 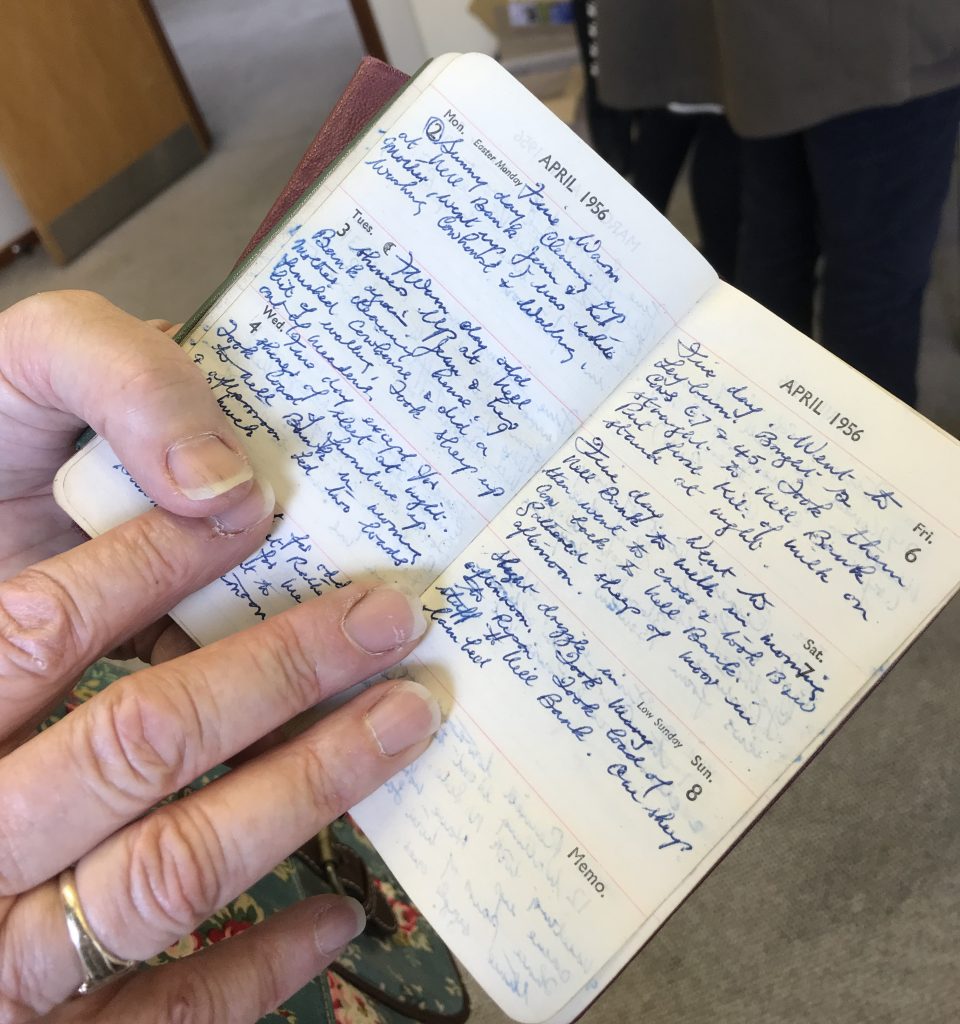 “So, in 1956 we moved up Walden, and I’ve got his diaries from 1954 so I’ve been able to have a look back and see if I can see any momentous parts of that and also some photographs that remind me of the time that I was up there. So we were there for three years and we moved up in the April of 1956 and during the weeks beforehand, the entries in the diary says things like, ‘moved the Ayrshire cow to Nell Bank,’ or ‘bought two cows at Leyburn,’ and then on April 6th 1956, there must have been quite a red letter day because he put, ‘first kit of milk on the stand at night’, ready to be collected to take to the dairy.’”
Sally Stone nee Dobbing (64), formerly of Town Head Farm, West Burton

In that first year her father lists his cows by name and which calves they had and how much they were sold for. From an early age, Sally clearly loved the farming life and helping out her father round the farm. He was milking his cows by hand and carrying the milk from cows in outlying barns back to the farm in a back can as she describes in the following audio clip: 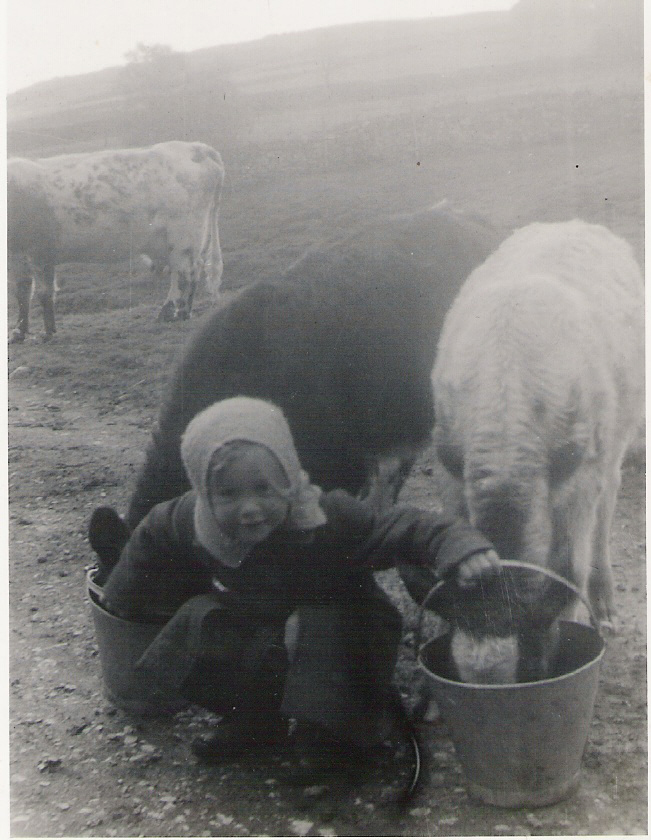 Farming at Nell Bank so high up the dale was clearly tough, particularly when it came to trying to gather in enough hay to feed the cows and sheep with over the coming winter. After just three years, her father secured the tenancy of a farm down in West Burton:

“Haytime was very difficult when we were up there. There’s quite a few entries that say, ‘mowed a field with a scythe,’…we would have equipment for the horse to pull, but some fields were extremely steep and of course for any dairy herd y’need to feed them and sometimes haytiming was going on into September because obviously the weather had been really bad it would take a long time to gather all the hay. I just have one or two vague memories of riding on the cart horse whose name was Daisy, but in 1959, we moved to West Burton and dad took on the tenancy of Town Head Farm, so everything moved with us except Daisy who was left behind, because at that time we got a tractor so life must have been much easier for my dad I think.” 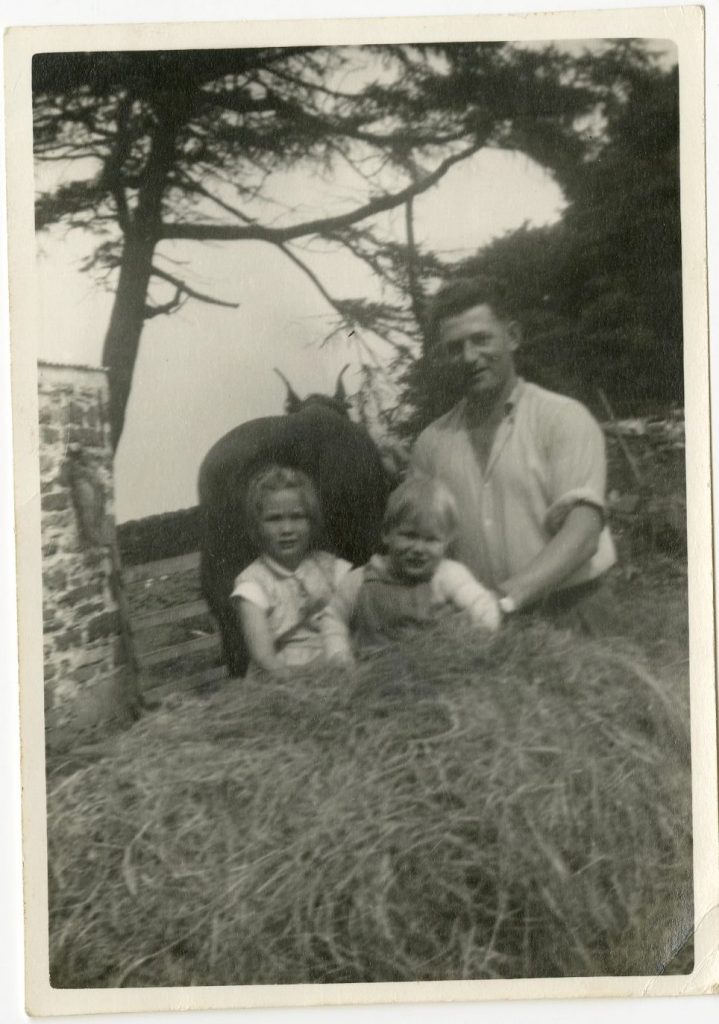 Almost as soon as they’d arrived, Sally started school, but she still managed to fit in as much farm work as she could:

“When we moved down to West Burton, it was just a couple of weeks before I was five, so I started school in the Easter of that year and so I would go to school but I came home for m’dinner and it [farm work] would fit round school as it did for the next sixty years, I was still lambing at six o’clock before I went to work [laughing] and teach at the school. But holidays times we usually spent trailing round with m’dad where possible, and doing things.”

One of the jobs she and her younger brother Peter had was training the calves to get used to being led using a halter. This proved to be very useful, as it meant that as adults they could be moved calmly and without fuss whenever they needed to be. 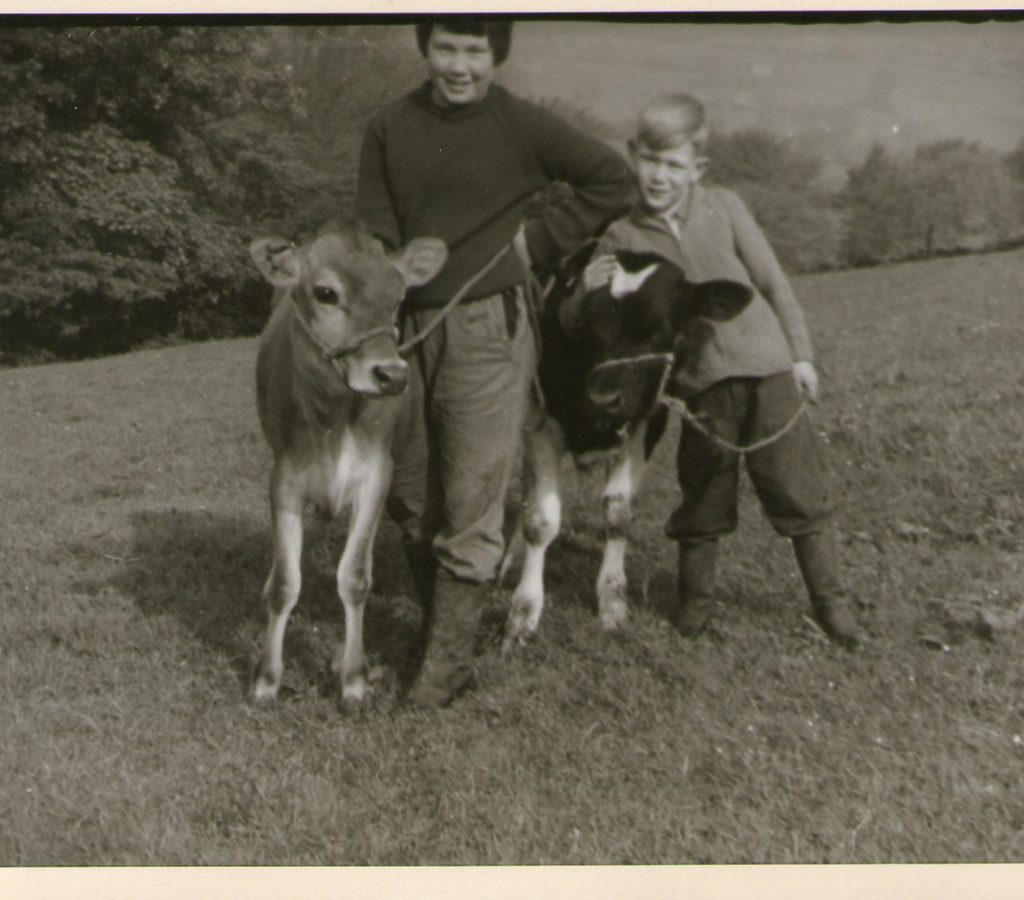 Milking had become a bit more sophisticated by this point in time and Sally earned pocket money washing out the milking machine units:

“…as a child I continued to absolutely love farming, always have done, I would help him milk, I’d go into the cowhouse where we had a pipeline which provided all the air and we milked into, the milk went into a bucket, and I used to enjoy just going and helping him put the units onto the cow’s udder and helping tip the milk into the sile which strained the milk which went into milk kits. And then when I was a bit older I used to earn about three shillings a day washing all the milk units [laughing], very thoroughly. And also just help mucking out. I can just remember being in the building and the smell of the cows, the smell of the raw milk…it was a really nice time.”

Sally’s father continued to record farming life in his diaries and in the following audio clip Sally recalls his descriptions of hard winters in Walden when farmers further up the dale had trouble getting their milk away:

Town Head grew as Sally’s father managed to add more land and  her brother Peter left school at sixteen to join him working on the farm. 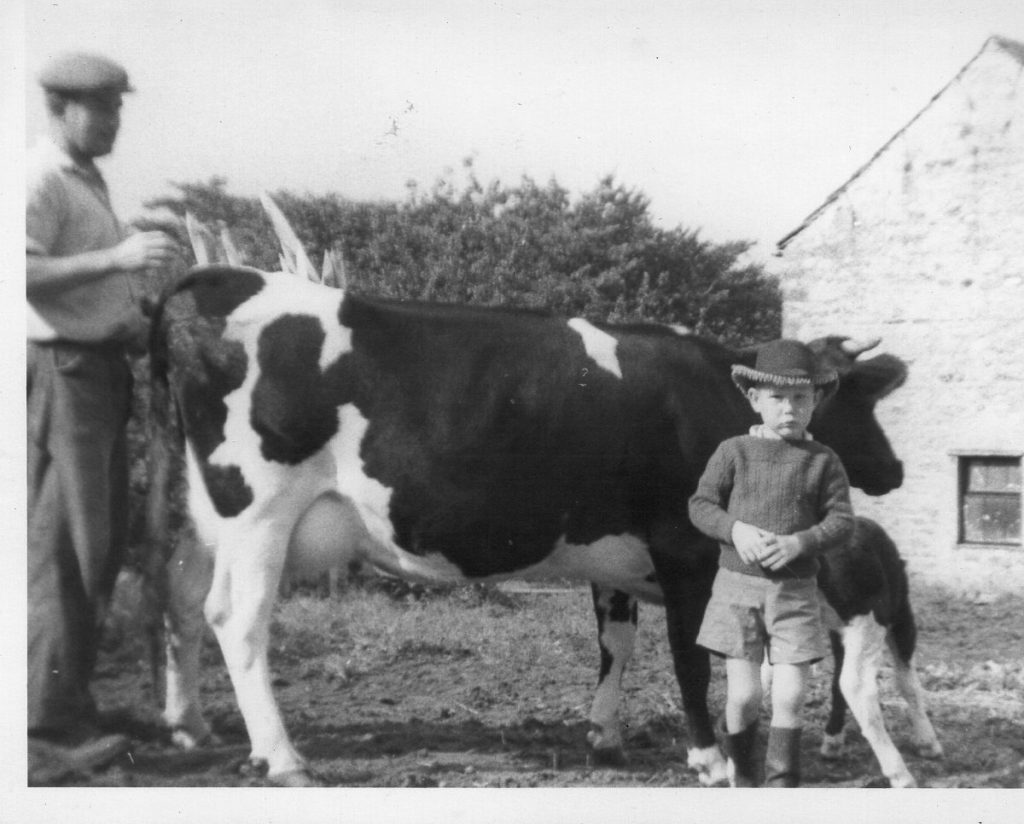 Suzy the cow and her calf at Town Head with dad and brother Peter, early 1960s. Courtesy of Sally Stone

Although Sally loved farm work she had no ambition to earn her living in farming:

“Because it [Town Head] couldn’t have supported m’brother and m’self. And, what, forty years ago, girls didn’t generally really go into farming anyway unless they married a farmer and that wasn’t an ambition either [laughing], so I went to teacher training college just ‘cos I thought it might be a good idea and sort of, thirty-five years’ experience later I retired!”

She kept her hand in, however, after she moved back to Wensleydale, with her young family, and later got a teaching job at West Burton School:

“And even when I was older and moved back to West Burton when I was then teaching myself, I used t’relief milk, think it was on a Sunday evening I would go up and do the milking. By this time we had a parlour and it was, the milk went down a pipeline, it was much more high tech, but I still enjoyed getting on my boiler suit and going and helping out. If they were busy haytiming or silaging I could milk for them.” 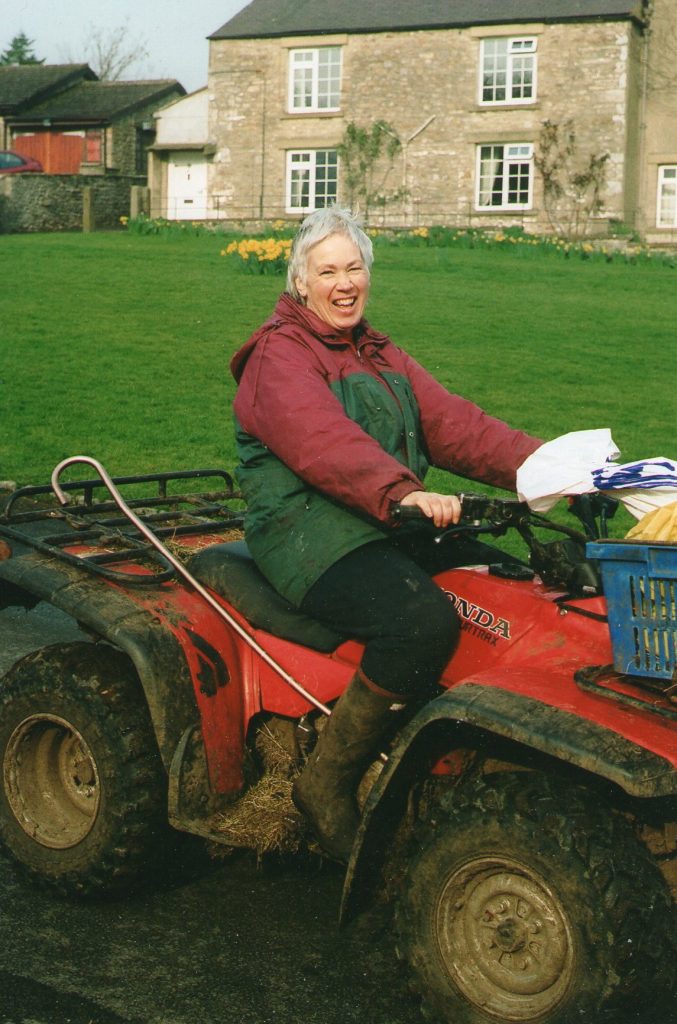 Sally Stone on her early morning lambing rounds before school. Possibly taken by the school caretaker. Courtesy of Sally Stone