We Dig Community is coming to an end in Bainbridge, but one last piece of fieldwork has been completed, a geophysical survey by Swaledale and Arkengarthdale Archaeology Group (SWAAG). Geophysical surveys (often referred to as ‘geophys’) are usually undertaken at the beginning of a project as they give you an overview of the site and can give you an indication of where to place your archaeological trenches. However, test pits, by their nature, should be a random snapshot of the archaeology of an area, so in this case the geophysical survey was being used to ensure that no large features were missed.
SWAAG did a Magnetometry survey on both the Village Green and the Quaker Field in Bainbridge. Magnetometry is a surveying technique that measures and maps patterns of magnetism in the soil. Magnetometry particularly detects soil changes, and shows indications of any burnt material. The machine used in this survey is very sensitive to metal, and those operating or even near the machine could not wear any metal to ensure that the readings were uncorrupted. 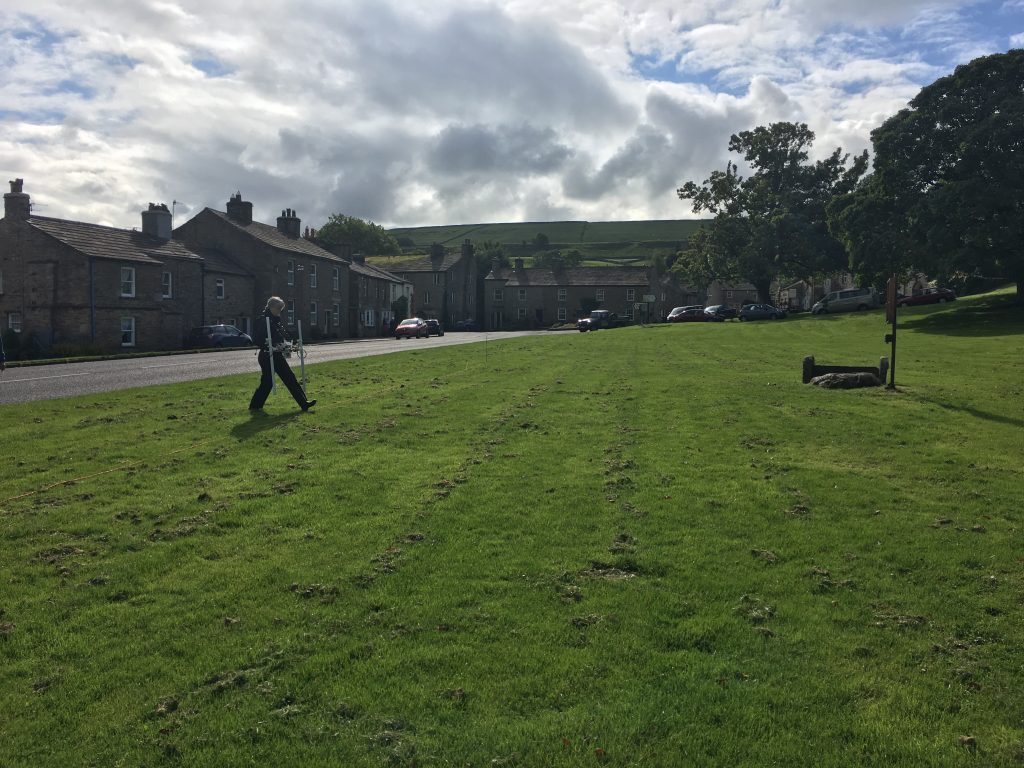 They also performed a Resistivity survey. Resistivity is used in order to measure subsurface features. This method uses a resistivity meter, which is a square frame with two or four electrodes sticking downwards. These are inserted into the soil at every half meter or meter and a brief pulse of electrical current is passed between them. The level of resistance is then logged, which can then be uploaded onto a computer. Therefore man-made features, such as remains of buildings, below the surface can be recorded, even if naked to the human eye, due to its detection through its resistance.
27 test pits have been excavated in total around Bainbridge and conclusions can be made about the history of the village. The results of the survey work will hopefully offer extra information about the village and the human activity that has taken place here over the centuries. The data collected by the survey is currently being collated and processed; we look forward to seeing the results.