SWAAG, the Swaledale and Arkengarthdale Archaeology Group, recently completed their excavations at the Hagg for this year. SWAAG have been working at the site since 2009, which comprises a Romano-British farmstead. This year the dig took place for two weeks and made a number of interesting discoveries. The excavations are adding a wealth of new information about Romano-British life in the dales. At present our understanding of these sites in the dales generally is rather limited.

This year SWAAG undertook an open area excavation which targeted a large terraced area of the hillside. From previous excavation work this area was known to be bounded by a wall to the north.  SWAAG had an amazing group of volunteers throughout the excavation, who had to deal with very challenging (and rather uncommon) sunny conditions! 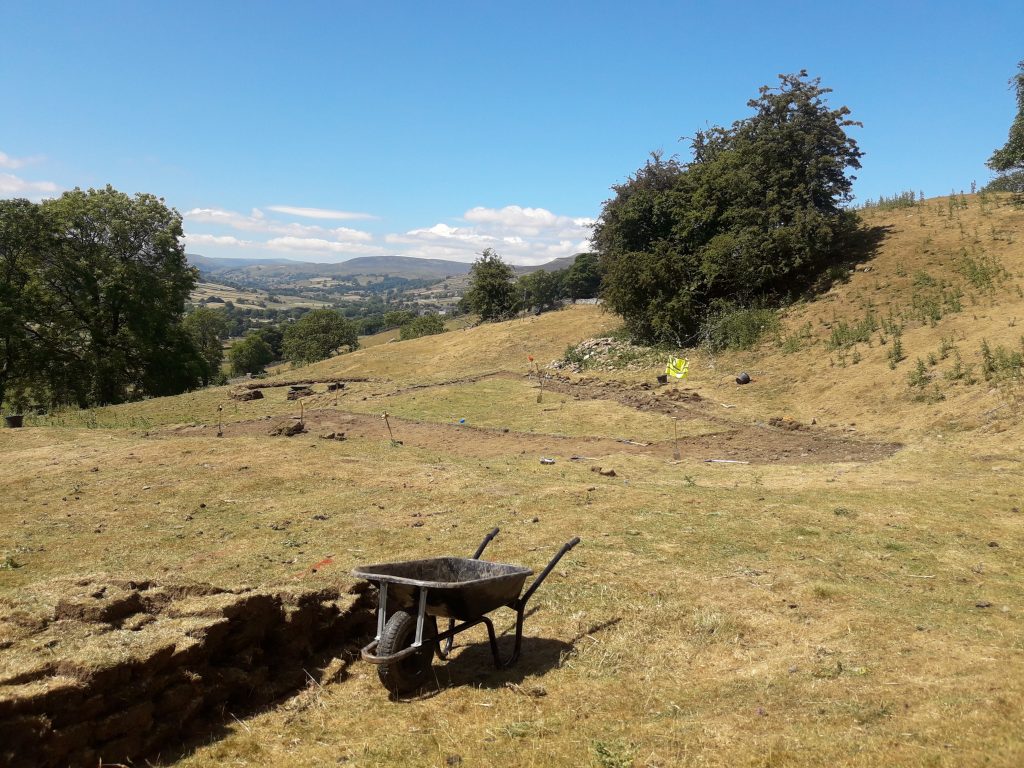 The excavations this year revealed that this part of the site comprised an open yard area, with laid surfaces constructed from large flagstones. The flagstone surfaces were substantially constructed and are thought to delineate paths leading through the farmstead complex. This suggests the presence and movement of livestock in significant numbers in and around the farmstead. The flagstones would have been necessary to prevent the ground from being churned up and to provide a firm footing for both people and animals on the hillside. Other large animals such as horses may also have been used to bring goods and materials in and out of the complex.  The edges of some of these former routeways appear to have been marked in places by the use of crinoidal white limestone blocks, which would have been distinctly visible compared to the dull-grey colour of the flagstones. [This is limestone that contains a significant amount of crinoid fossils – crinoids are a type of marine animal (sea lillies being one form).] This may have been done for aesthetic reasons, perhaps to convey status or to impress visitors to the site. Alternatively it may have had a more practical purpose in marking the edges of paths to make them more visible.

A large collapsed wall was uncovered which formed a boundary to the eastern side of the terraced and flag stoned area which sits within the large terrace. Some shorter sections of wall were uncovered within this terraced area and these suggest that there could have been some subdivisions of the space within. One of these short sections of possible wall appeared to form an end to one of the areas of flagstones in the south eastern area of the site. On the north western side of the site, another short section of a substantial wall was exposed, as well as features that could be pits, although time constraints prevented their full investigation. [Pits are dug features – commonly used for disposing of rubbish or for storage, but could also have other purposes.] At the northern end of the site a possible roundhouse was uncovered. Two lengths of the possible roundhouse walls were partially visible in the trench.  Further investigation is needed as it remains unclear whether this feature was a building. 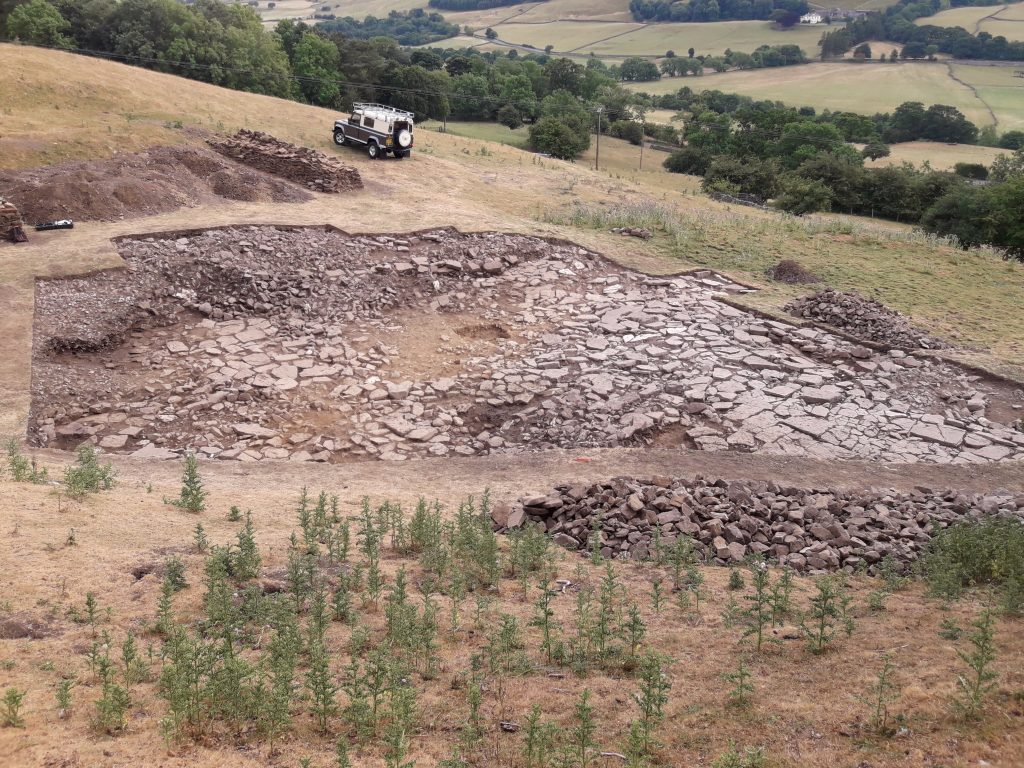 Towards the end of the project, an area of paving in the south western corner, initially thought to be natural, was also shown to be a constructed surface. A limited investigation of this surface demonstrated that further archaeological deposits were present underneath, pointing to the potential complexity of the site. This demonstrates that there are different phases of use in areas of the site which date to different periods of time, with earlier phases of use being overlain by later ones.

Finds worthy of note from this years investigations at the Hagg included a stylus and a number of quern stone fragments. The stylus was a broken example made from copper alloy, although thanks to the keen eyes of the SWAAG volunteers, the other section was also recovered later during the excavation. This implies that someone was present on site who could write, which might suggest that record keeping was taking place. Whilst the number of quern stone fragments might suggest that processing tasks were taking place on the site, such as the grinding of cereal grains to make flour. 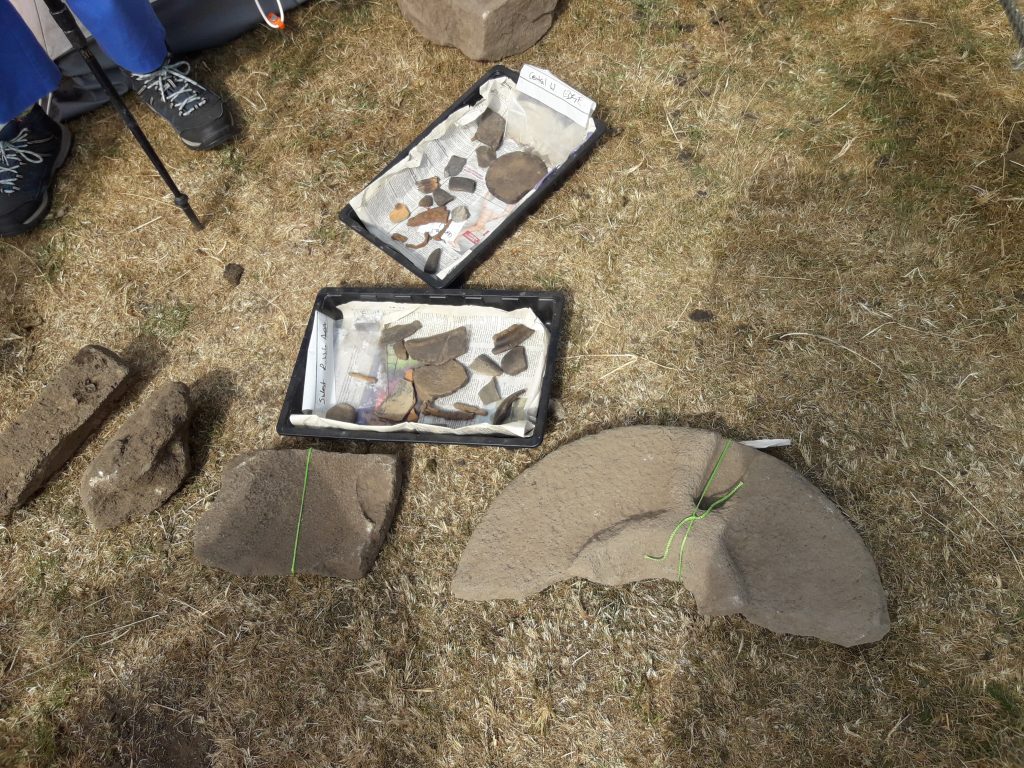 A number of finds were uncovered including pottery sherds, a stylus, a possible games counter, and lots of quern fragments

The site was visited by pupils from Arkengarthdale Church of England School and Reeth and Gunnerside Primary Schools. With these visitors in mind the turf removed for excavation was used to recreate the outline of the roundhouse investigated in 2017. This allowed visual context for those on site digging, but was great to use when describing the site to the local school children. The children spent some time in the “roundhouse” with Jane Sammells, of Curriculum Kitchen. Jane was in traditional dress as a Romano-British householder, and the children got to try all sorts of Roman delicacies with spelt or barley bread. [Environmental samples from the dig last year included six-row barley]. On the tour of the site they discussed what it might be like for people living in Swaledale during the Roman period. They also were told about the latest thoughts on the finds and layout – this included seeing a number of finds from the site. 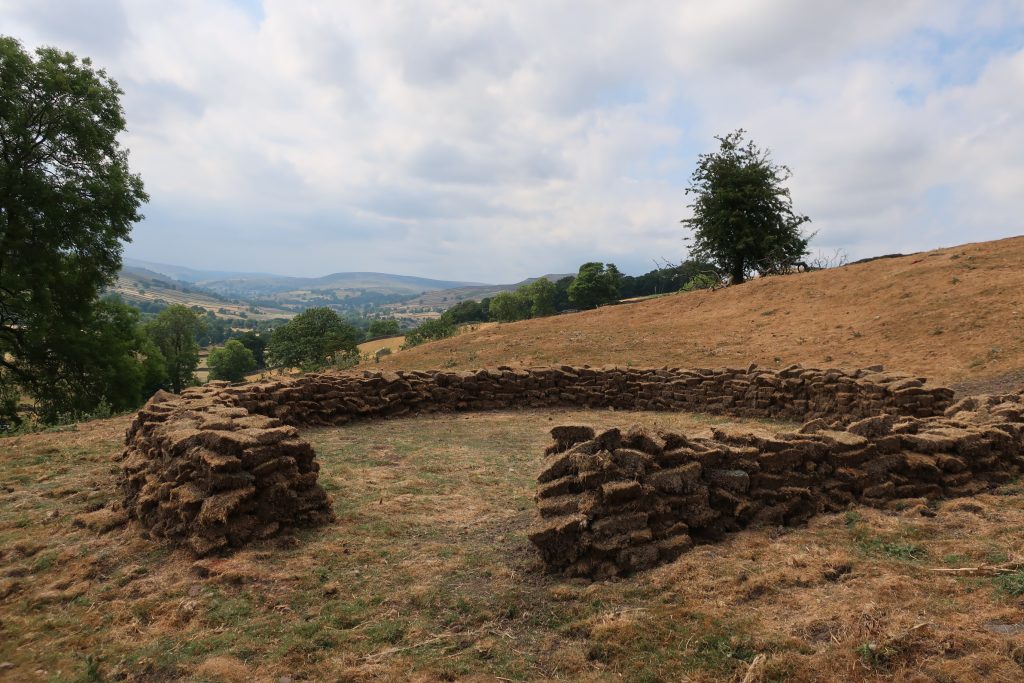 The site chosen has great views down Swaledale.

It continues to be a busy summer of archaeology in the dales with more projects to take place in the coming months. SWAAG organise regular events and meetings, as well as conducting annual excavations. See swaag.org/index.php for further information on the discoveries at the Hagg and to learn more about how to get involved in future events.