Cheese fit for a Queen

One of our contacts has forwarded some excerpts from old Yorkshire newspapers about cheese making in Wensleydale. They date to around the turn of the last century and offer a fascinating insight into how seriously the manufacture of Wensleydale cheese and butter was taken locally.
One article titled ‘Blue Moulded Cheese’ dated 27th July 1911 quotes a gentleman called Mr John Benson writing in the Journal of the British Dairy Farmers’ Association as follows:

“…the correct flavour of a Wensleydale cheese appears to be dependent upon mould growth and the efforts of the maker are concentrated upon producing a curd in which the correct type of blue mould will grow luxuriantly… A Wensleydale cheese, when well made and properly ripened, is…the best blue-moulded variety of cheese in the world. There is nothing to equal it, but to secure good results the milk must be fresh and sweet, and to this he ascribes the success of the small dairies, which are able to deal with perfect fresh milk. He only knows of one or two factories where the manufacture of Wensleydale is a success, but in these instances the selection and care of the milk supply receive most careful attention. The Wensleydale is eminently a cheese for the small-holder.”
We think this photograph illustrates well the pride that local cheesemakers took in their product. The unknown man holds one of his prized cheeses on a wooden server and stands next to an immaculately clean cheese ‘kettle’ – the note that came with the photograph is fascinating. 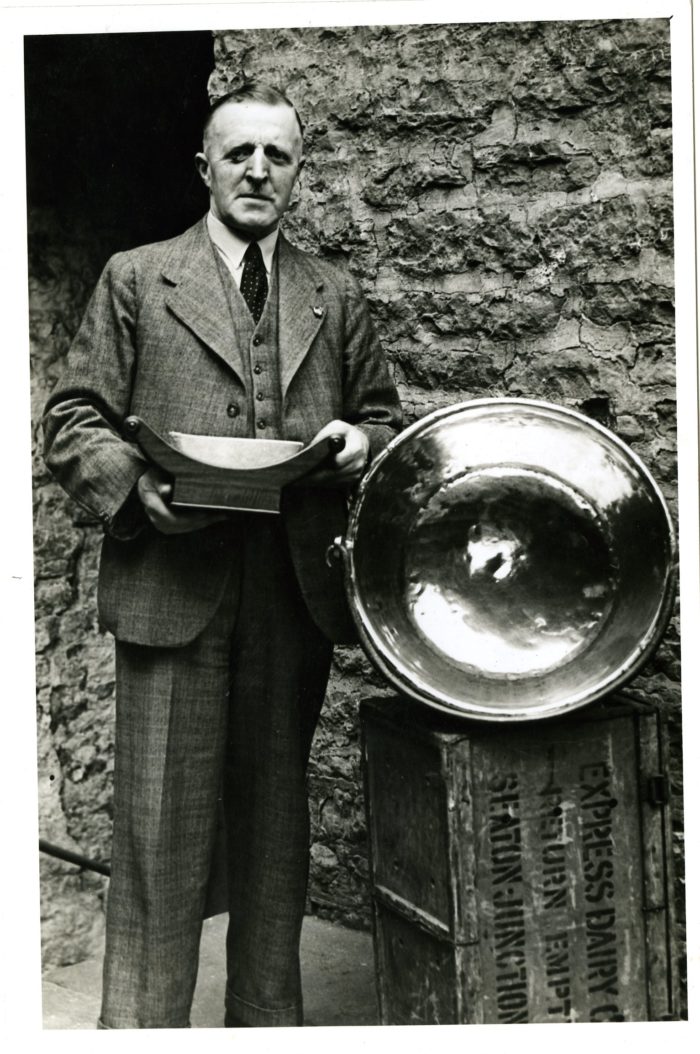 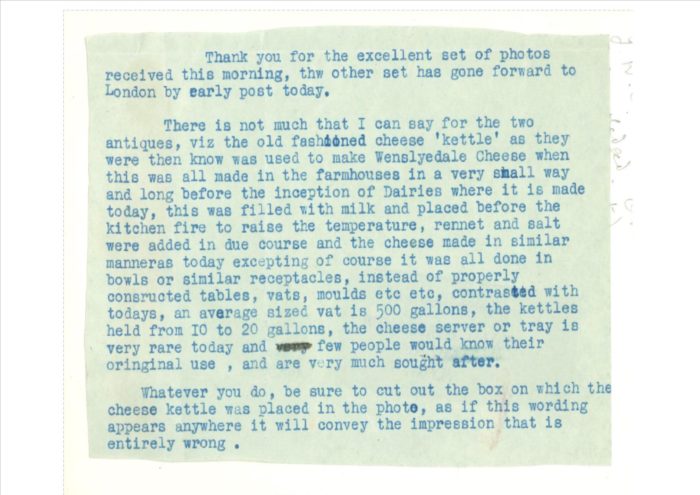 Another cheesemaking expert whose name often appears in the newspaper articles is a Mr Thomas Nuttall.

Thomas was a prize-winning maker of Stilton cheese originally from Melton Mowbray. In 1900 he  took over a derelict factory in Derbyshire set up 30 years earlier by the Duke of Devonshire to make cheese from his tenant farmers’ milk.   Nuttall’s dairy was extremely successful, eventually becoming a famous maker of Stilton cheese,  known today as the Hartington Creamery.

Mr Nuttall seems to have been much in demand both as an advisor and as a judge, as this late nineteenth century article about the fourth annual cheese and butter show of the Leyburn Market Club shows. 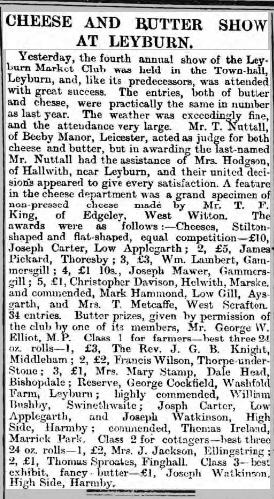 An earlier article describes the rather peculiar origins of the Leyburn Market Club in 1832, founded from the proceeds of a fine levied on the wealthy employer of a local gamekeeper for shooting a foxhound called ‘Cloudy’. The article goes on to describe how the club’s original aim was the improvement of Wensleydale’s cheese and butter. The club waned and by the time the article was written in 1887 it was in need of reviving owing to a perceived decline in the standards of local cheese and butter. Thomas Nuttall was one of two speakers brought in by Lord Wharncliffe, a local landowner, to advise farmers in Hawes on making better cheese and butter. There seems to have some dispute about whether this was necessary however! Most thought that all that was needed was better publicity so the club committee hit upon the idea of sending a cheese to Queen Victoria as a Jubilee gift. Her staff agreed and a competition was held in Leyburn to find the cheese in question!
Thomas Nuttall was one of the judges and the winner of the £10 prize for the best cheese was one Mark Hammond of Low Gill, Aysgarth. Some effort had to be made to stop the eager members of the public from trying to taste the prize-winning cheeses on show:
“When the door was opened there was a rush, and the spacious room was soon filled… Not withstanding the conspicuously displayed cards warning the visitors not to touch, yet a smart look out had to be kept. A good many of the visitors while inspecting the cheese remarked that they could tell little or nothing from looking at them, but if only they could taste a crumb, then they would be able to say whether they agreed with the judges’ awards or not. .”
York Herald 8th October 1887
We can only hope that Queen Victoria enjoyed her prize-winning cheese!
The banner photograph shows cows being milked on Redmire Pasture in 1910 (National Archives, Copy1 564/219)

3 Replies to “Cheese fit for a Queen”