Bolton Castle – a home, a prison, a ruin

Mary Queen of Scots is the focus of a new film. But did you know about her connection to the Yorkshire Dales? She was briefly imprisoned at Bolton Castle. Read January’s Site of the Month on the 14th century Castle to find out more about the connection.

Bolton Castle was built between 1378 to 1399 for Richard le Scrope. [Richard le Scrope was an English soldier and courtier who held a number of positions in the service of Richard II.] It is a rectangular fortified house with square angle towers which enclose a courtyard. Nikolaus Pevsner described it as the

climax of English military architecture. It represents a state of balance between the claims of defence, of domestic complexity and comfort, and of an aesthetically considered orderliness.

Mary Queen of Scots was imprisoned there between 1568 and 1569. After her defeat in Scotland in 1568 she fled to England, posing a threat to Queen Elizabeth I. She was initially held at Carlisle Castle and was then moved to Bolton. She was kept there briefly for 6 months before being taken to Tutbury in Staffordshire. 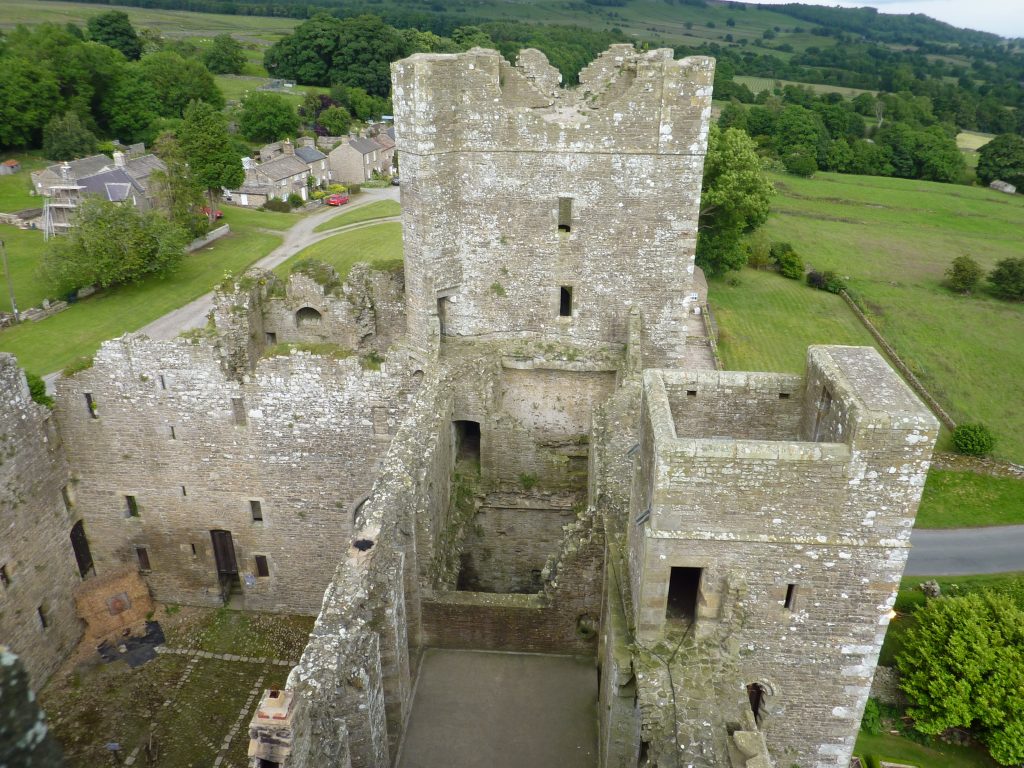 The Castle’s fabric shows over 600 years of history.

The master-mason on the build was John Lewyn. A contract dated 1378 survives for construction of the east range. However, the licence for the crenellation was granted in 1379.

The Castle is constructed from rubble with ashlar dressings. There are four 3-storey ranges about a rectangular courtyard, with 4-storey corner towers. The entrance was by the gatehouse in the east range. The original windows were lancets with cinque-cusped heads and labels. However, some in the south-west tower were altered to form 3-light mullion and transom windows.

The main chamber is on the first floor of the north range. The chapel (dedicated in 1399) is on the second floor of the south range. The interior can essentially be broken down into 8 major household units and some 12 lesser lodgings all integrated into one unified conception.

The walls of the castle were consolidated between 1992 and 1994. This was a 4 phase conservation project undertaken by English Heritage to address the serious threat to the castle. This resulted from freshly-fallen stone both inside and outside the walls. During the project the walls were almost entirely repointed and all the wall tops consolidated. The castle was also further recorded using mainly digital techniques. Through survey work including fabric analysis and investigations into the buildings history 6 Historic periods of construction, occupation, alterations, dereliction and conservation have been identified. 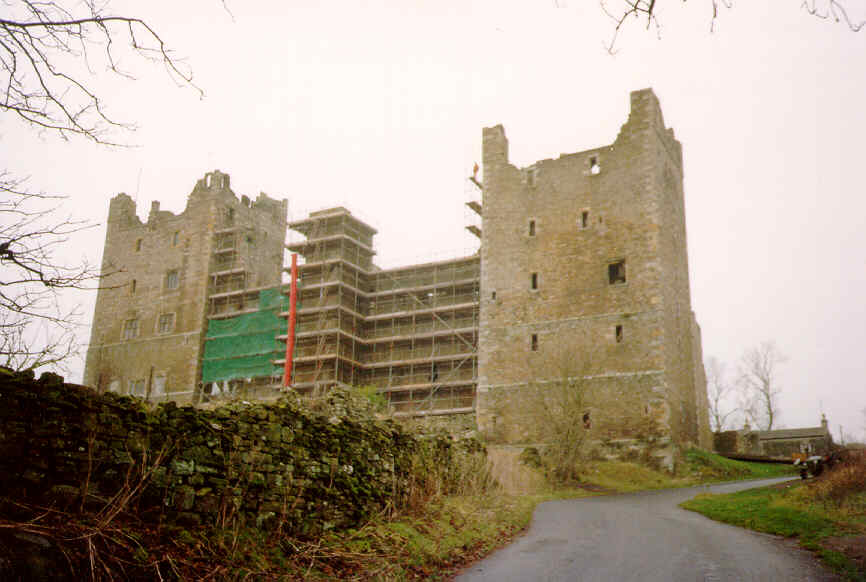 This photograph was taken in the early 1990s when scaffolding was up for consolidation work.

The reinstatement of the gardens followed an archaeological survey in 1994. In rebuilding and reinstating the gardens they tried to adhere to Albertus Magnus’ principles which he laid out in 1260. This places emphasis on the variety of flowers ‘to delight the sight and smell’. There are two walled gardens immediately in front of the Castle. These were laid out along medieval lines, but reduced somewhat in size and scale.

The original garden covered an area of nearly 20 acres. The exact layout and features are not completely known. However, it seems unlikely that there was ever a moat. The siting of the castle in 1379 would have meant views of the ancient Forest of Wensleydale. By 1535 there were a series of deer parks – the surrounding high walls still survive today. Deer parks were a symbol of high status in this time. 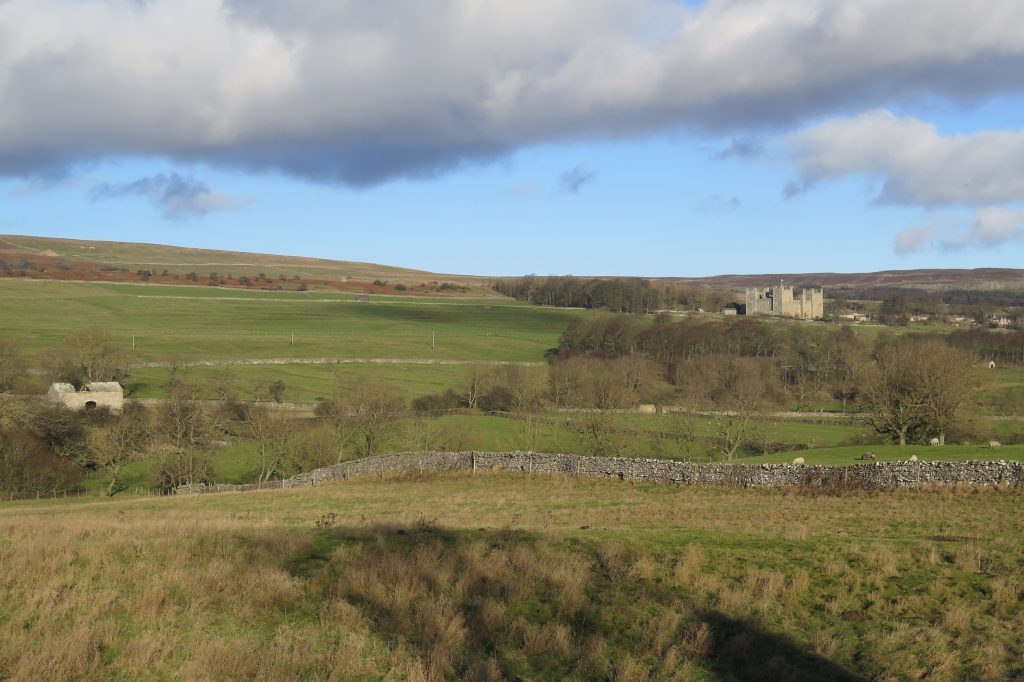 Bolton Castle stands prominently in the landscape today. Can only wonder what impression it would have made in the 14th century.

In the Doomsday Book the areas valuation suggests that the village was quite large. A feature of the surrounding area is the extensive medieval field system with prehistoric settlement close to the village. The present village may have been planned after the castle was built, replacing East Bolton, though it may have existed earlier in its present form. In later years the village was closely associated with quarrying, lead and coal mining of which there are extensive remains on the adjoining moors. 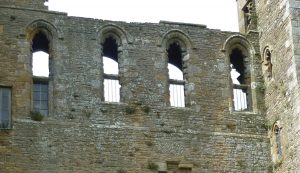 There are five cusps at the top of these windows.

Cinque-cusped – Point made by the intersection of two curved lines or members, cinque refers to the number 5

Crenellation –Defensive parapets were composed of merlons (solids) and crenels (embrasures) through which archers could shoot – known as crenellation. However, they were also used decoratively. 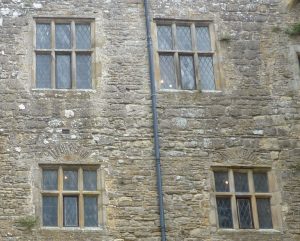 These windows are mullion and transom

Mullion and Transom – The mullion is the vertical member between window lights; the transom is the horizontal member separating window lights.

Historic Environment Record: MYD4561
Designation: Scheduled Monument, Grade I Listed Building and Conservation Area
OS Grid Reference: SE 0337 9183
Civil Parish: Castle Bolton with East and West Bolton
Dale: Lower Wensleydale
Access: Bolton Castle is visible from both the road and from PROWs. The Castle is currently closed for Winter but reopen on 23rd February. Check out their website to find out their opening times.