Local historian Penny Ellis has kindly put together a folder of information for us relating to a small farm called Spickles near Thoralby. The documents range from part of the 1840 Tithe map for the parish right through to a wartime Agricultural Returns form for the farm. The maps, census returns and government paperwork provide a fascinating picture of the life of a family-run dairy farm over a hundred year period.
By coincidence we recently walked along Eastfield or Eshington Lane (we’re not sure which name is correct!), from Eshington Bridge towards Thoralby and ended up near Spickles – which is still very much a working farm. Notice the big stack of green plastic wrapped silage bales and modern sheds for overwintering cattle. 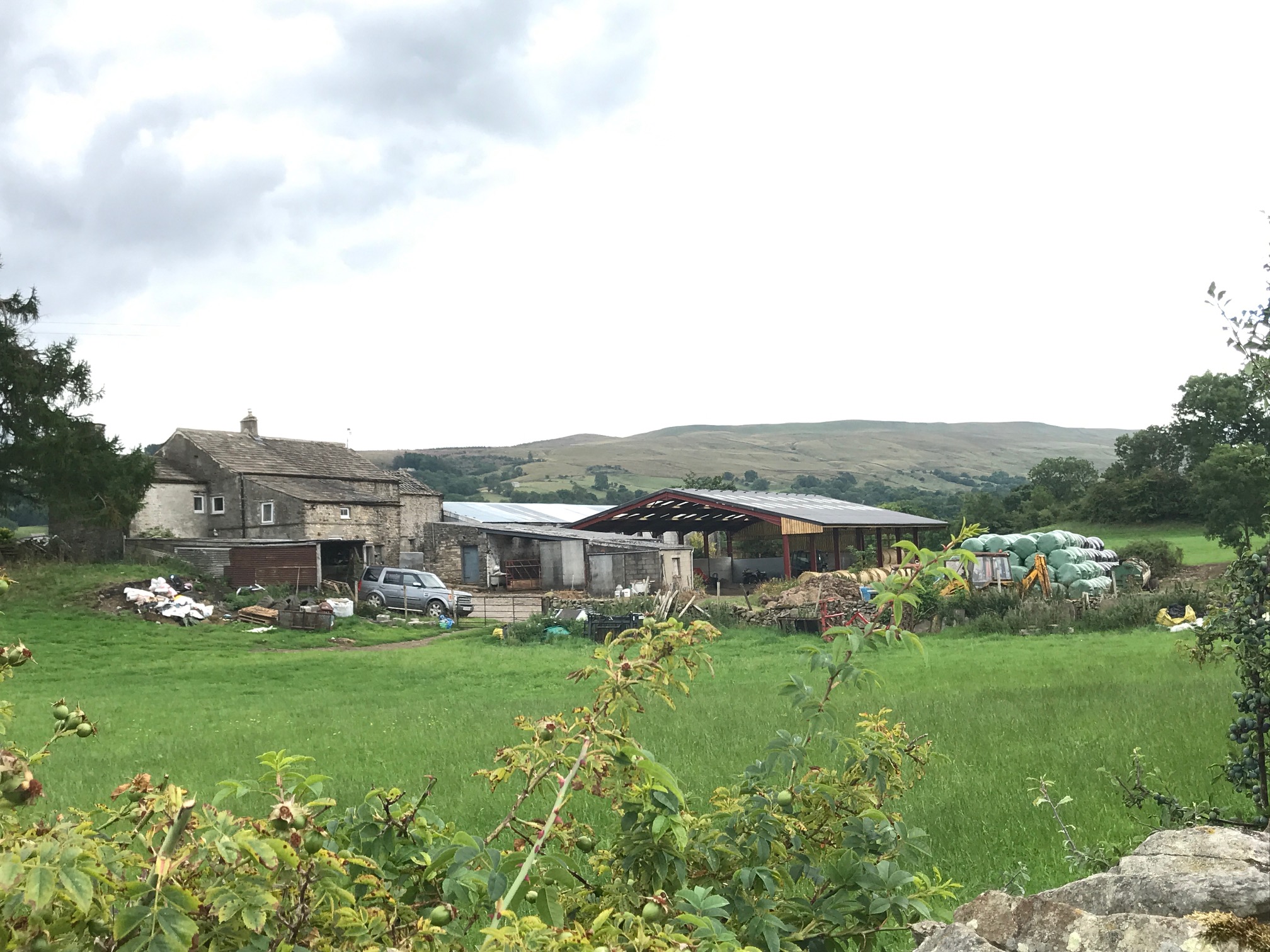 The farm lies at the bottom of a steep slope with Bishopdale Beck running along the bottom fields to the south and the land rising up quite steeply north to the A684. 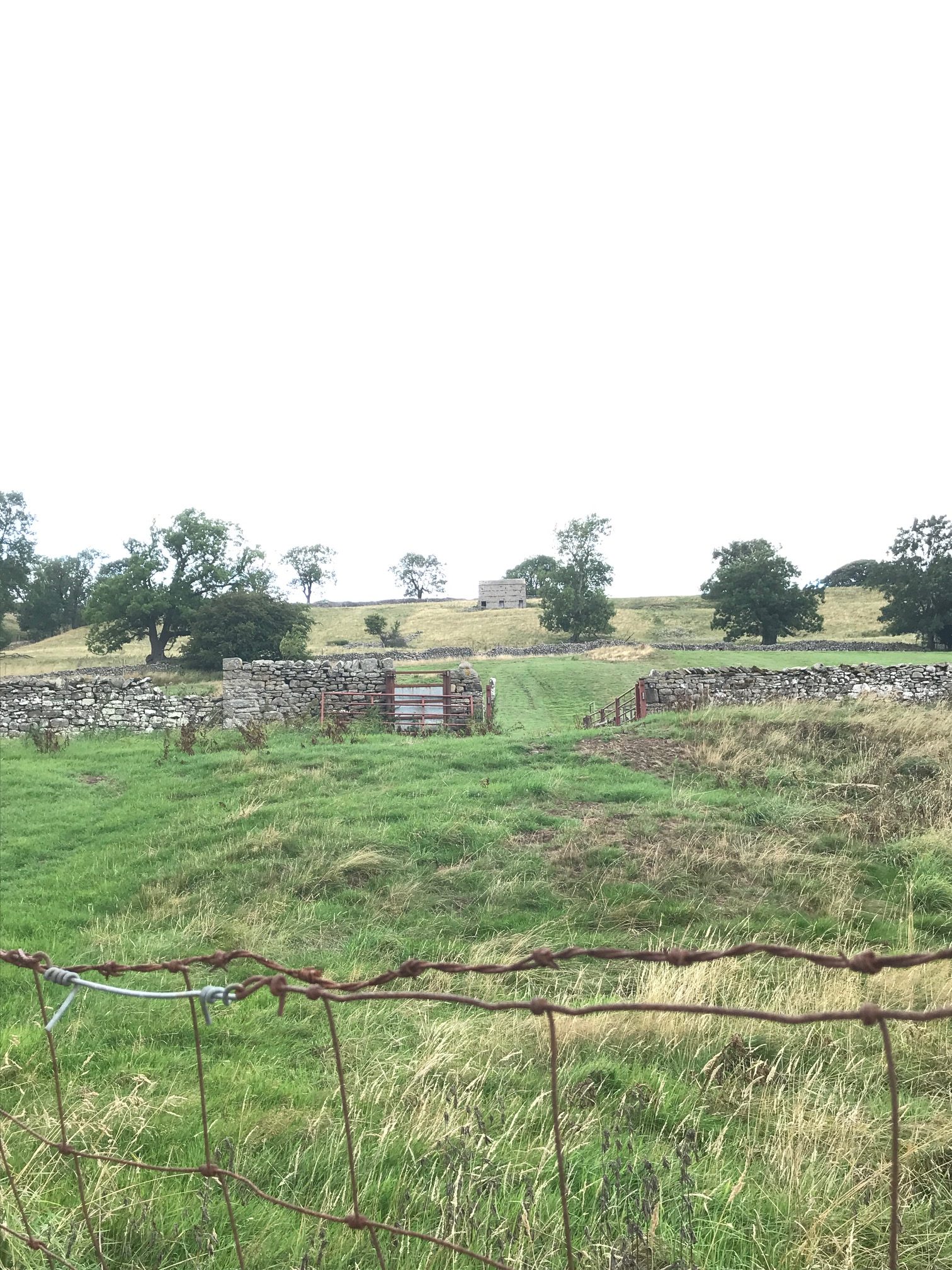 Land rising steeply to the north of Spickles Farm

The 1840 Tithe Map and Apportionment shows us that the farm was owned by a woman called Mary Orton and tenanted by a man called Francis Coates. The land comprised of a mix of meadow for hay and pasture for grazing, plus a two acre arable field, a small wood, a couple of enclosures or garths, a garden, the house and a stable – just over 24 acres in all. There’s no mention of the farm having a moorland allotment or common grazing rights on the hills and later information suggests that this was never the case. Matching the field names with the map we see how the farm’s fields run from the stream below the farm house,  roughly northwards in a block, right up almost to the top of the hillside.
The meadow belonging to Spickles that is nearest the stream is called ‘Water Field’ and we were interested to spot two cattle underpasses as we walked along Eastfield Lane just before we got to the farm. Cattle underpasses are tunnels dug underneath tracks to allow cattle to cross from one field to another, in this case to access water from Bishopdale Beck as and when they needed to. 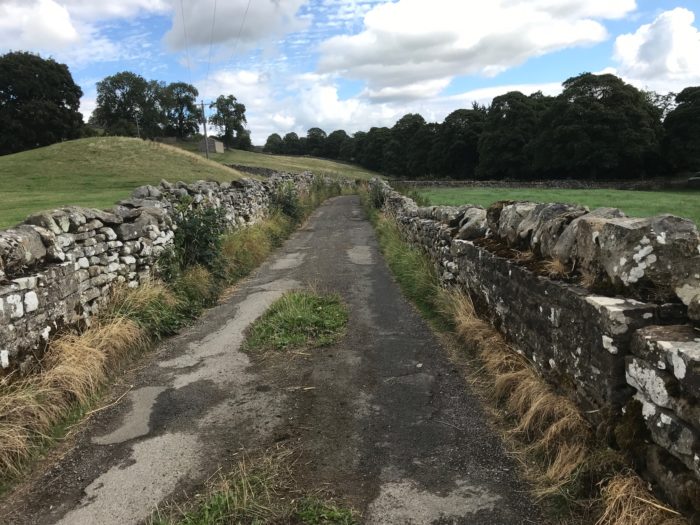 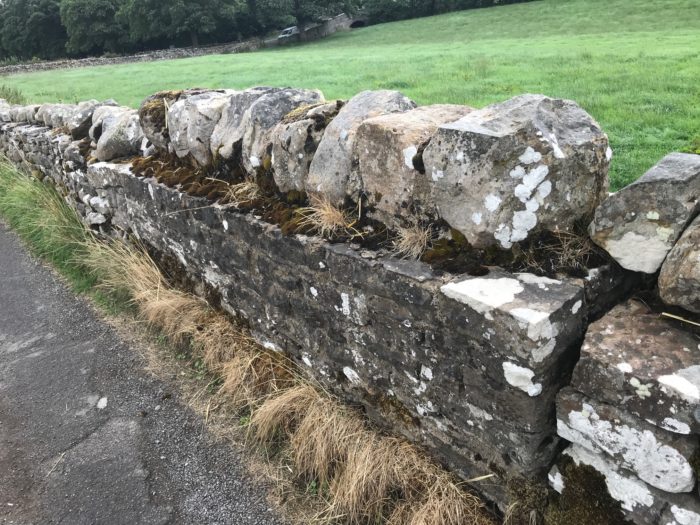 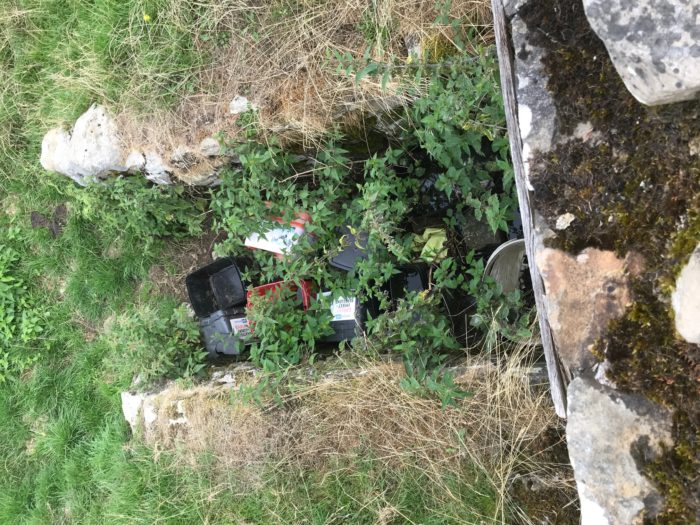 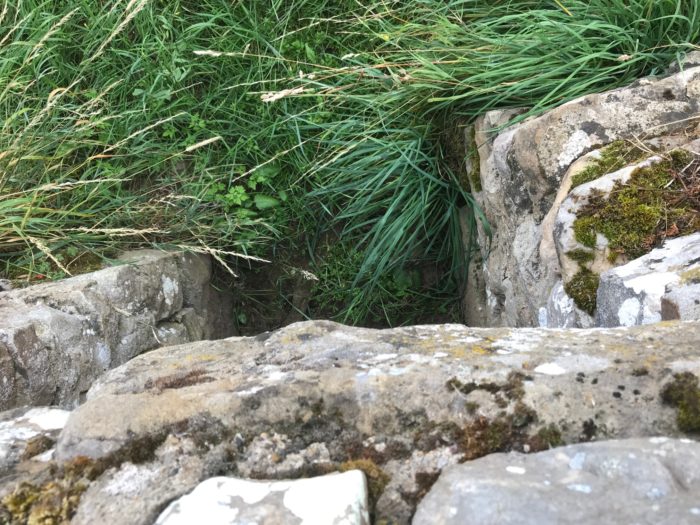 Entrance to a second underpass on Eastfield Lane


The economic importance of cattle in the past is obvious from the number of field barns we spotted. Cattle from Spickles and surrounding farms were housed in them over the winter, along with the hay crop cut from the surrounding meadows which was their winter fodder. We photographed one which is sadly derelict. Alongside it lies the rusting remains of an old-fashioned small-sized hay baler. 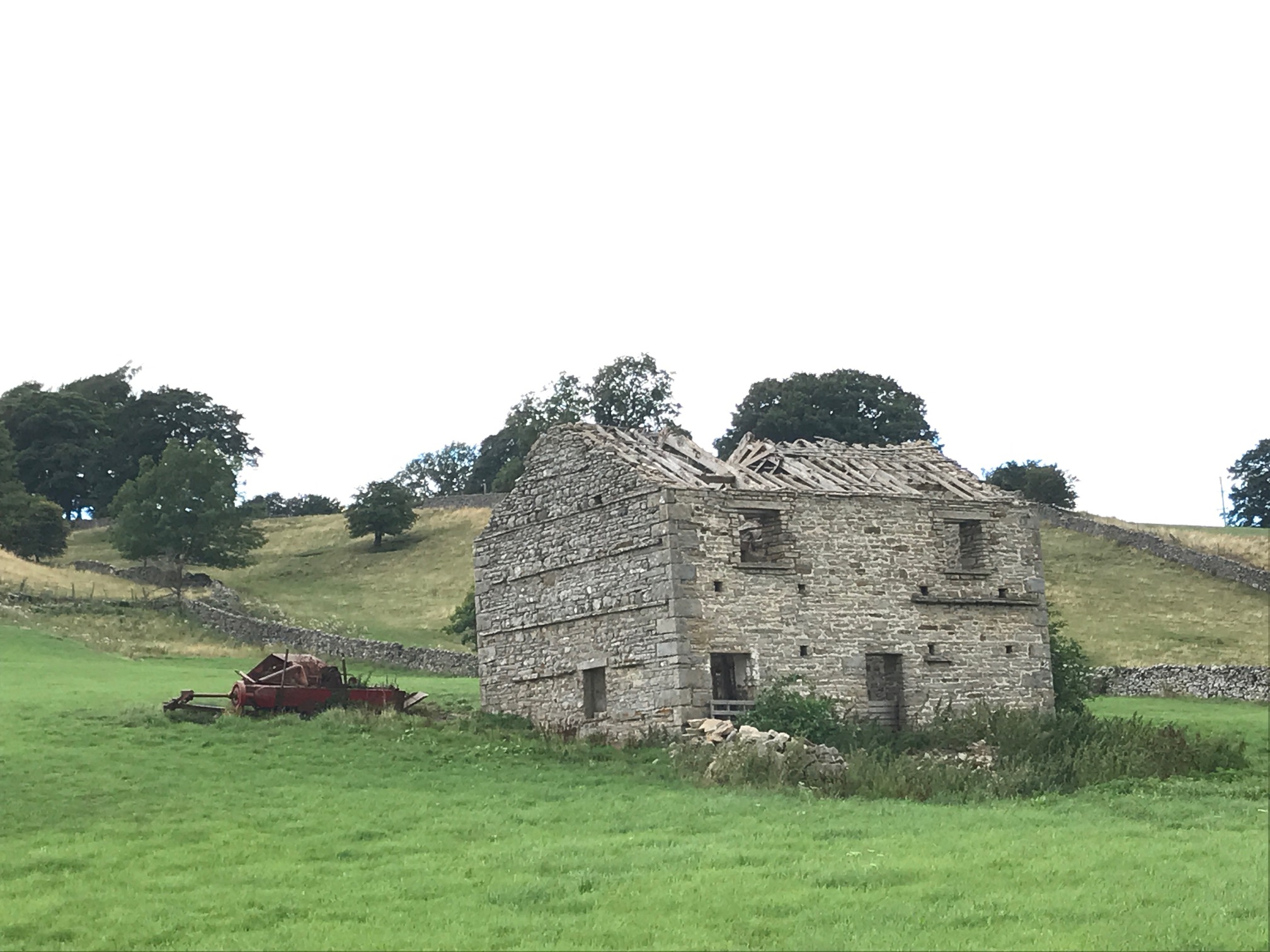 A closer look and through the doorway we spotted the remains of the wooden stalls or ‘booses’ where the cows would have been tied all winter, just let out to drink and kick their heels once or twice a day. 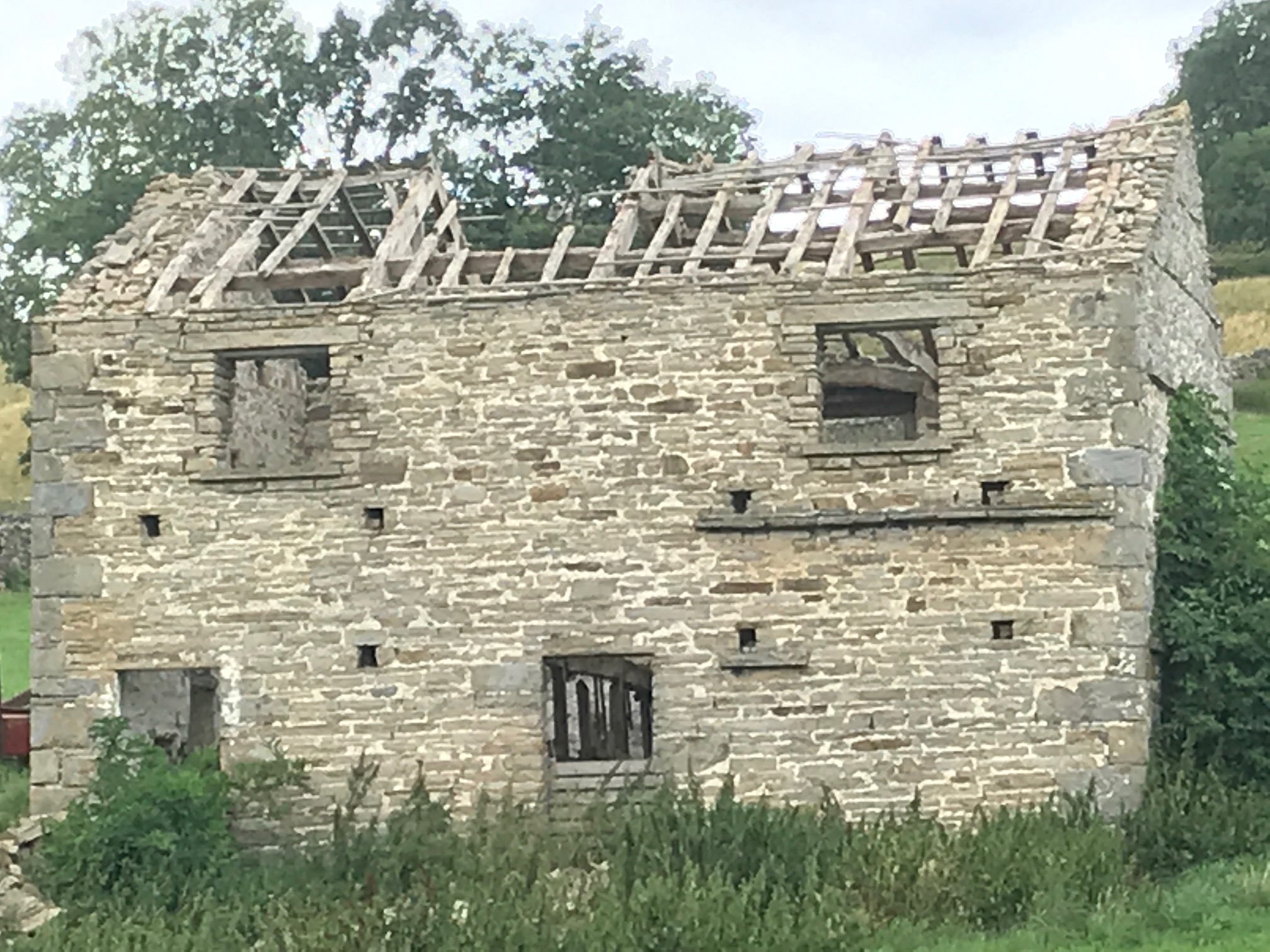 Close up of derelict barn on Eastfield Lane, Thoralby

We know that Spickles Farm had a field barn built sometime after 1840 and before 1872 because it appears in Edward Broderick’s valuation of that year – described as a ‘Barn’ and shown on the accompanying map lying in the centre of a large meadow to the north of the farmhouse called (we think) ‘High Jewels’. It is missing from that field on the 1840 Tithe map. It also seems to be the only field barn belonging to the farm at that point in time.
The farmer Francis Coates was elderly when the Tithe Map was drawn up – around 70 years old in fact as we discovered from the 1841 census. Living with him at Spickles was a 60 year old wife, called Elizabeth; a 25 year old son called Thomas and a 20 year old daughter called Mary. There are also unexpectedly, two infants in the family, plus a 15 year old servant called Dianah Metcalfe.
By 1851, Francis has we assume died, and his son Thomas is now farming at Spickles. He has married and produced six children.  It appears the unexpected infants in the previous survey were his, perhaps his wife Mary was absent when the census was taken. There is no longer a servant to help with the domestic work.
Ten years later and Thomas and Mary now have nine children – all supported from the 42 acre farm – although his two eldest children are listed as assisting him in the work.
By 1871 everything changes – the farm has almost doubled in size to 80 acres and is tenanted by John & Eleanor Fawcett who have a domestic servant and a lodger. John and Eleanor are clearly ambitious – by 1881 the farm has acquired 10 more acres, a 15 year old nephew as an ‘Farm Serv[ant] Indoor’ and a female general domestic servant. They are still there in 1891 though Eleanor has become Ellen, now 78 years old and several more younger relatives are living with them. John dies the same year aged 76.  Francis Furnish, the nephew who arrived on the farm aged 15 now inherits it.
Francis and his wife Rachel have two daughters, the eldest of which, Ann Jane has her occupation listed as ‘Farmer’s Daughter, Dairy Work’ on the 1911 census. This is the first documentary reference to what we must assume had been occupying a large part of the time of the wives, daughters and nieces listed in all the previous censuses for Spickles.
A valuation for 1910 shows the farm as only having just over 31 acres of land. There is a sketch attached to it showing the farmhouse and its outbuildings. Joined onto the left hand side of the roughly square house is a long, two-storey building with the words ‘barn, byres, stable, carts & granary’ written in it. Parallel but separate to the main building lies a smaller rectangular building – at one end of which is the ‘privy’ or outdoor toilet, with ‘Pigs & Calves’ living in the main part. It is clearly a dairy enterprise, with byres for the milking cows in winter, a barn with calves fed on spare milk and pigs probably fed on the whey left over from cheesemaking.
The Furnishes’ younger daughter Ida, marries a farm labourer called William Spence Bell in 1934 and they are listed as living at Spickles in 1939. William is described as a ‘Dairy Farmer’ and Ida as carrying out ‘Farmhouse Duties’ which we must assume include managing the farmhouse dairy. It is interesting to note that in 1939 almost every man farming near Spickles in Thoralby is also listed as a dairy farmer.
Penny Ellis has a photograph of Ida and her sister taken in 1916 on her Thoralby Through Time website.
The final documents in the folder were drawn up during the Second World War. Every farm had to have a so-called ‘Agricultural Return’ filled out and sent to the Ministry of Agriculture and Fisheries.  In 1941, Spickles is 51 acres in size, still a tenant farm and still mainly a dairy farm. The farmhouse has no electricity but it does have a piped water supply. Water for the farm buildings and fields is described as being from a ‘stream’. They have 21 acres of meadow and 29 acres of pasture and an acre of kale. No rough grazing is listed. A Mr F. Furnish has occupied the land for 50 years. His labour force consists of himself, a female family member and one male labourer under the age of 18 plus one casual (seasonal or part-time) female worker. They have no machinery or tractors, all the motive power is supplied by just one horse. There were 63 sheep and 32 chickens on the farm, but it is the dairy cattle that form the most economically important part of the stock listed. Mr Furnish has 11 cows and heifers in milk; one cow in calf but not in milk; one heifer in calf with its first calf; a young bull being raised for servicing the cows plus seven younger animals being raised as replacements for the dairy herd and two presumably male calves intended for slaughter.
The men from the Ministry conclude that Mr Furnish is looking after his land well, the condition of both pasture and arable land – growing kale & turnips (as animal fodder we presume) – is marked as good, the top mark available. There are however infestations of rabbits, moles, rooks and wood pigeons and while the condition of the farm buildings and house is good, the fences [ie walls and hedges] are merely ‘Fair’.
Back to our walk and we saw that cows still graze the fields around Spickles and the drystone walls looked to be still in ‘Fair’ condition, it being the nature of cows to rub up against them and knock them over every now and again! 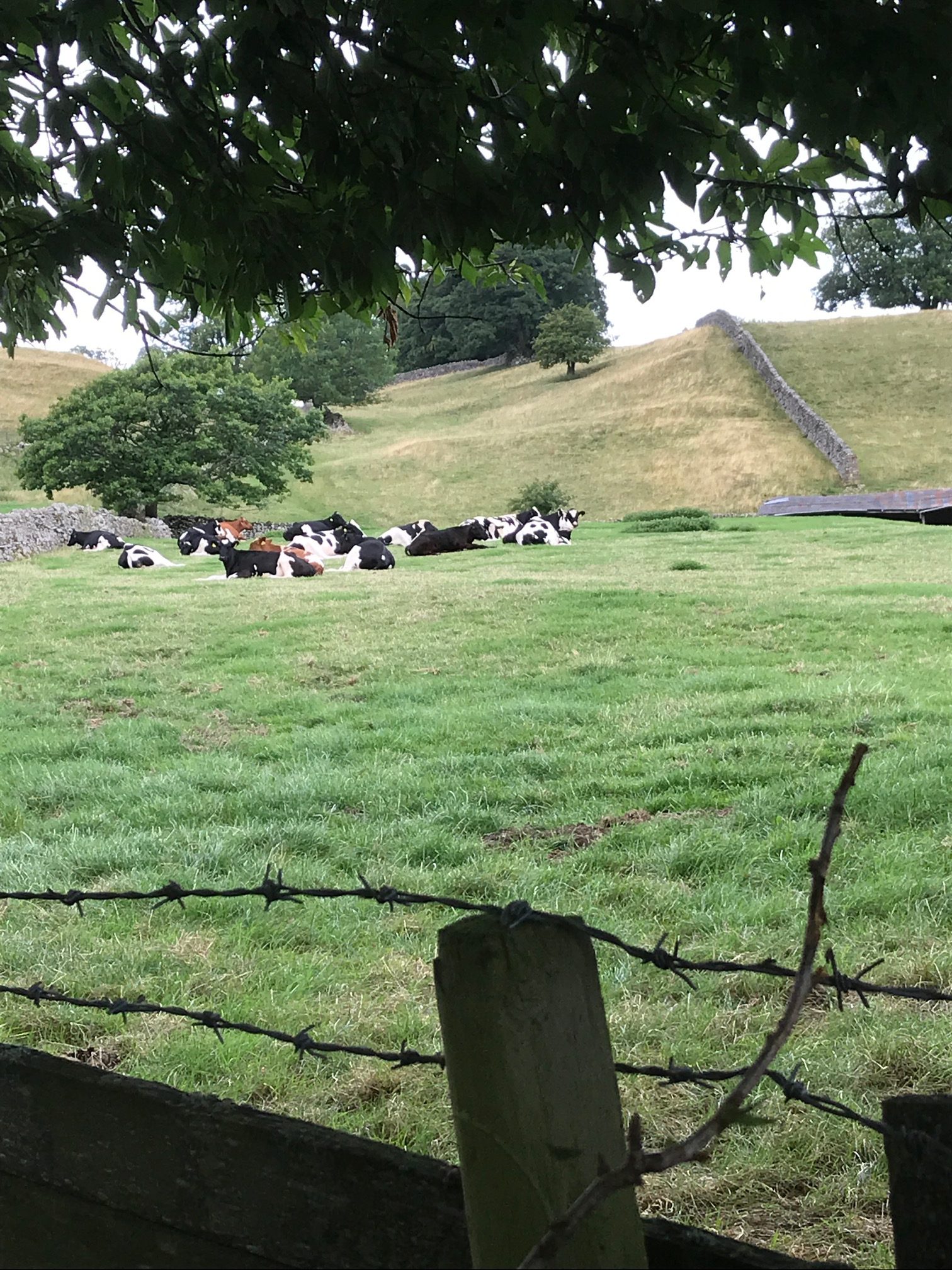 Cows off Eastfield Lane near Thoralby