Our interview with David Mason was undertaken by Sally Stone last month and we have just finished transcribing it. David’s involvement with dairying in Wensleydale was very wide ranging – starting with family stories about his grandfather Edward Preston, a farmer and cattle dealer who bought the old Hawes Dairy as an investment, through trips out on the wagon collecting milk churns with his Uncle Herbert, to working as a boy on a milk round in Leyburn.

David’s grandfather was born in the 1860s and farmed at Borwins, near Hawes for some years having married a Jane Dinsdale from Dent. He also did some cattle-dealing on the side, and was apparently popular with farmers because of the fact he paid in sovereigns:

“…this was the time when paper money was coming in, and Dales farmers did not trust paper money and quite rightly ‘cos some of the small banks went bust, and they had every cause not to trust them. So with his bagful of sovereigns he was always secure at doing deals.”
David Dinsdale Mason (79), formerly of Leyburn 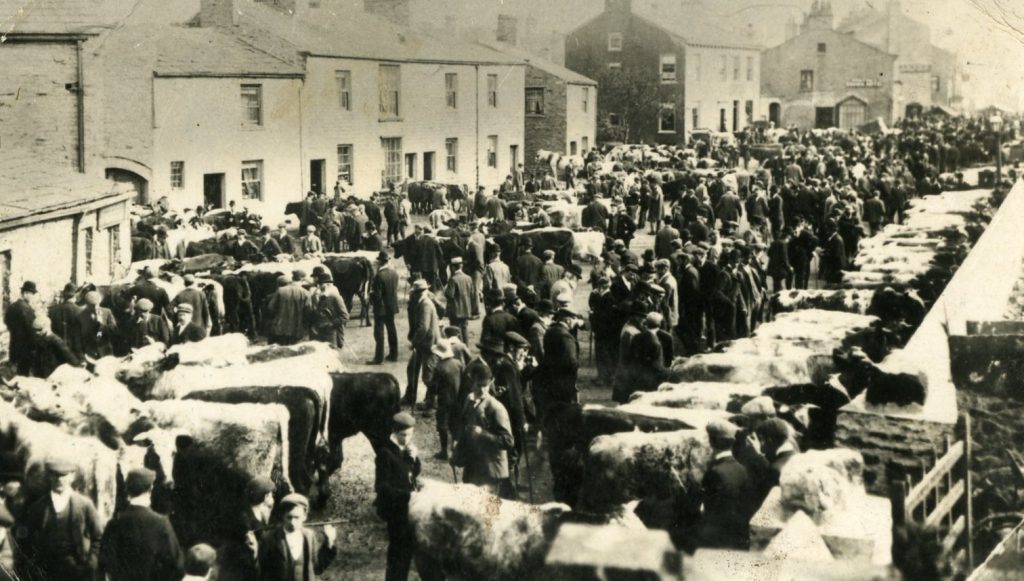 Interestingly, the 1911 census for Bainbridge has an Edward Preston living at Borwins then but he is recorded as being 81 years old so it’s not clear if this can be the same man or perhaps a generation removed.

According to David, his grandfather eventually sold the farm and with an eye for an investment opportunity bought the old Wensleydale Dairy, which was located in the centre of Hawes at that time, alongside Gayle Beck. As we wrote in the blog post Early factory production of cheese in Hawes, this cheese-making concern was founded in 1897 by a local corn and provision merchant Edward Chapman. 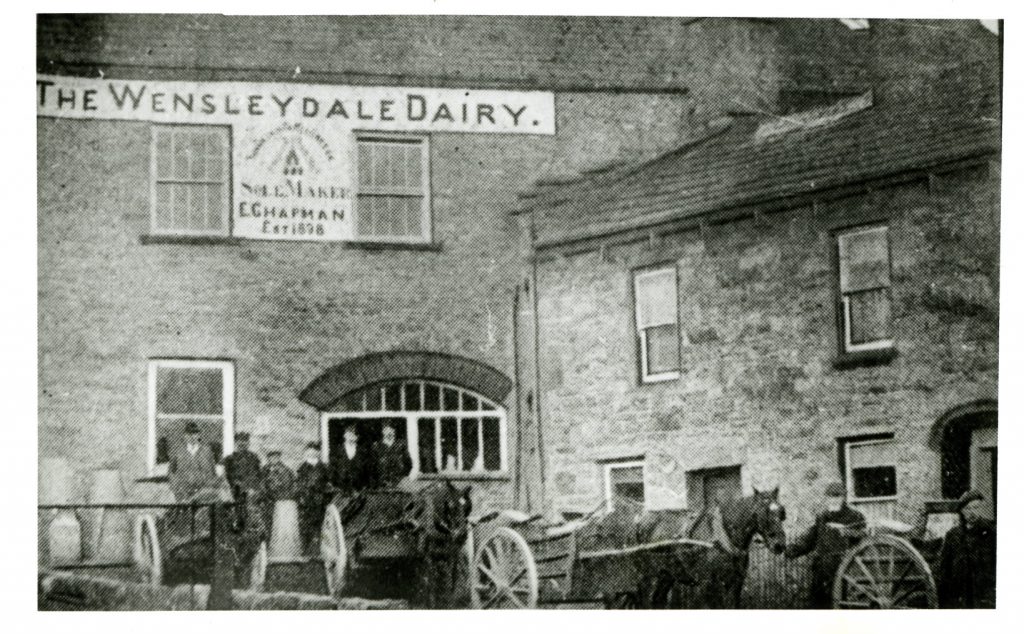 David’s grandfather must have bought it off Edward Chapman sometime around the time of the First World War, he’s simply referred to as ‘a local farmer’ in Kit Calvert’s 1946-published booklet ‘The Story of Wensleydale Cheese’.

David recalled that Edward Preston was very innovative and brought the idea of feeding the left-over whey to pigs into the dale. Listen to him discussing this with Sally Stone:

Kit Calvert certainly writes about the economic importance of piggeries to the cheesemaker:

“To the factory cheese maker whey can be either a profitable sideline to his business or an inconvenient expense. It depends whether his factory has an up-to-date piggery within easy reach of the main buildings. Without a piggery whey can become a major problem to the dairy manager. He is obliged to dispose of it, but no local authority will allow it into the town’s sewer, nor will the Fishery Board allow it to be emptied into a river.”
T C Calvert (1946) ‘The Story of Wensleydale Cheese’ p18

David’s grandfather sold the factory for £800 in the late 1920s having found it unprofitable and ended his days farming in Bedale.

As a boy  living in Leyburn, David has fond memories of joining his Uncle Herbert who used to drive the milk wagon collecting from farms up and down the dale in the early 1940s. 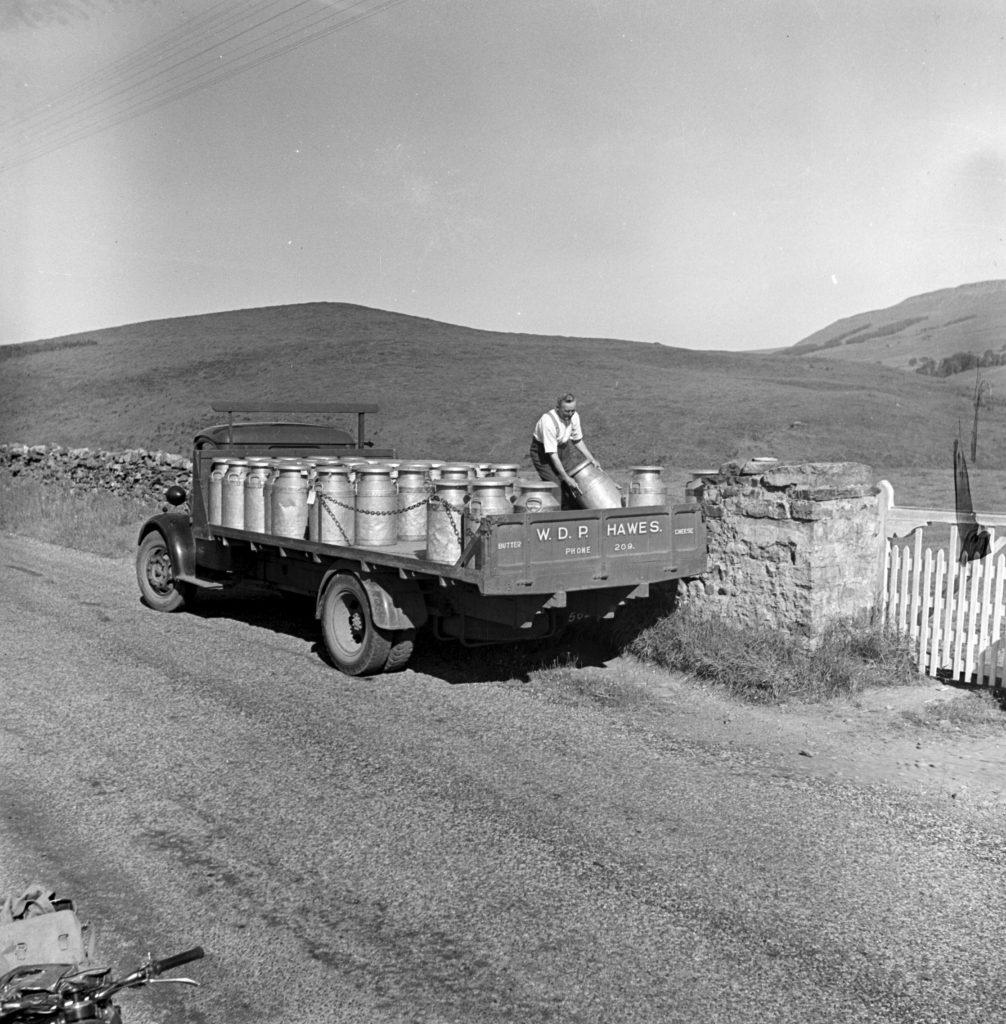 “… he was driving round the old Bedford wagon with the phone number on the back ‘Hawes 209’ and collecting the churns and delivering them to the dairy…Well, when I went with him he used to go up Widdale and I found that very interesting, ‘cos the fields up there seemed so very, very big, and these massive stone walls going right up to the top of the fell. In Leyburn well we still had a lot of hedges, few stone walls, but mainly hedges, so going up t’Hawes and seeing the stone walls was like a different world…Virtually every farm [in Widdale] had a few cows…[selling milk to the Dairy in Hawes?] Well, there was nobody else to sell it to…farmers in Hawes would have a little milk round of their own. There were no milk bottles in those days, they’d have a big can and there was a ladle measure and they would, for a pint, they’d get a good ladle full and then a drop more and they say ‘that’s a drop for the cat’, people always got good measure” 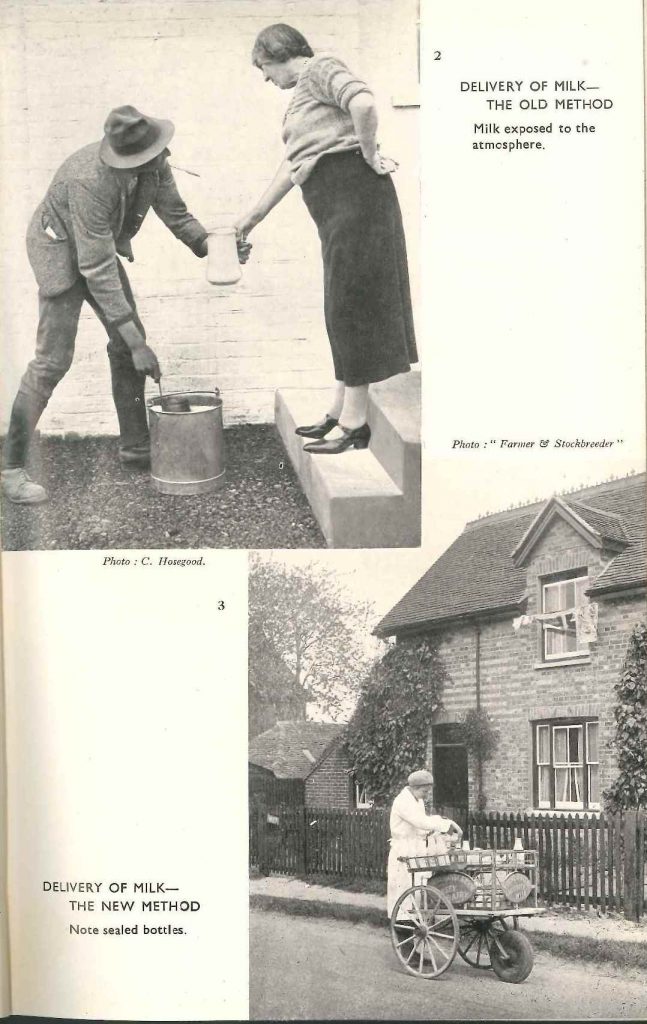 As soon as he was old enough David started working on a milk round for the Davison Brothers in Leyburn. It seems to have been a remarkably responsible job for such a young boy:

“…first thing in the morning, I would, we’d got onto bottles partly by then, some bottles and some cans, we had a big can t’ladle it out, and we had bottles, it’d depended what  people’d want. And first thing in the morning, I would do enough bottles to take us through the milk round, we’d go off on the milk round with Peggy the white mare pulling the milk float and do all round Leyburn then I’d get a very good lunch provided, all the milk I could drink was part of the deal. I’d half a crown for Sunday, half a crown for a weekday when I was on holiday, and three and six for a Saturday, ‘cos that was the day we collected the money and I was responsible for collecting the money and I had a big gabardine mac with very deep pockets and it was absolutely full of small change by the time I got, very, very few ten shilling notes and hardly any pound notes, ‘cos a week’s milk then would be three or four shillings and people on Welfare Milk got it for a penny ha’penny and that was ten pence ha’penny, so there was a lot of change [laughs] but not a great deal of money so I’d gather it all up, go and get out the book, tick who’d paid, note who hadn’t, count it all up and I presume somebody would eventually take it t’the Bank. And I’m sure they were very pleased to see this mountain of change coming in.” [Sounds like a very responsible job?] “Well as I was only 7 or 8 at the time [laughs] I don’t think the employment situation now would allow a child of that age to work at all…have y’not got t’be 16 or something?…well right up t’leaving school I worked on the milk round and I was very happy doing it…”

The Davison brothers were producer-retailers in that they milked their own cows and sold that milk directly to their customers. Sometimes if they had excess milk they sold it to the Express Dairy in Leyburn and sometimes if they didn’t have quite enough they bought it in from them. The cows were northern dairy shorthorns and ‘old father Davison’ would apparently hear of nothing else. David told Sally a particularly amusing story about the lengths that Mr Davison senior would go to acquire a pedigree beast.

David continued working on the milk round until he left school in 1954 when he went to work as an articled clerk in Hawes. Here he often came across Kit Calvert along with other business people in the community. In this clip he describes how Kit Calvert always offered employment at the dairy to people who needed it:

“Kit was very good, he took on anybody who was wanting a job, and he would train them up, and probably wouldn’t be able to pay them a lot but it would give them a job and a bit of self-respect and anybody who was out of work would say ‘I’ll have to go up t’Dairy and Kit’ll set me on’ and he always did and great credit to him, that was a very good paternalistic attitude.”