Cows and pigs and chickens, oh my!

Cows, pigs and chickens all occupied the traditional farm buildings that were surveyed as part of the Dairy Days project. Up to now the surveying side of the project has focussed on recording earthwork sites. This week contractors from Northern Archaeological Associates (NAA) along with two volunteers surveyed buildings on a farmstead in Thornton Rust.

Unfortunately, due to the nature of the surveying the places on the event were restricted. However, this meant that volunteers got one-to-one training in the different techniques. The day started with an introduction to the site. Kate (from NAA) explained the research she had done so far and the discoveries she had made about the farm. This was followed by a look around the buildings themselves.

There is an interesting combination building which when in use included a byre, a storeroom and pigsty. This also had hay and granary stores above. There are also the remains of a separate farm building – a hennery piggery. [Pigs were housed below and hens roosted in the upper room, accessed by stairs. The hennery piggery on this farm used the natural slope of the terrain so the upstairs had only a couple of steps.] 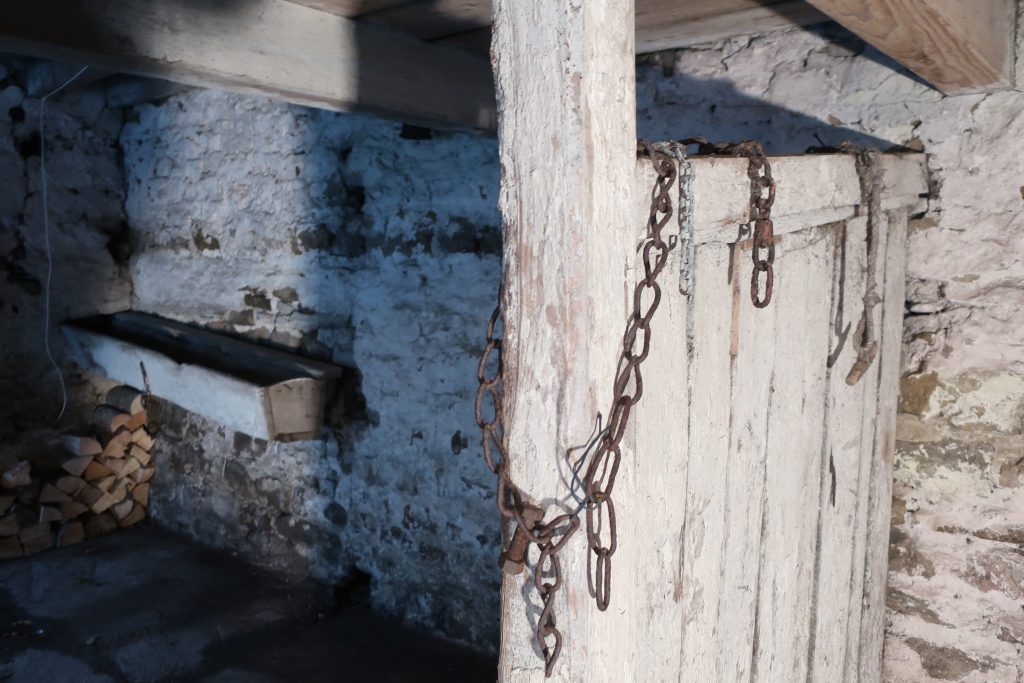 It is great to see surviving features! We were told by the owner that the trough was for a horse that was stabled there.

A number of different techniques were used to survey the farm building. The byre was surveyed using tape and offset – a method the volunteers were familiar with from the earthwork surveys. A planning frame was also used – this proved difficult to get out of the car, and we even discussed leaving it in there. But I’m glad we didn’t. It proved to be an essential piece of equipment and enabled a really detailed plan to be made. It resulted in the floor and any other features being surveyed in precise detail. There were surviving features like the boskins (the stall dividers), the group (drainage channel for muck), as well as some of the paving (a corner of which had survived the laying of the concrete, probably to adhere with hygiene regulations). There was also some fragmentary evidence – one of the boskins or stall dividers was missing but an outline could be seen on the floor and there was a space in the wall, as well as small holes in the floor which might have once contained rudsters (these were poles which the cows were tied to). 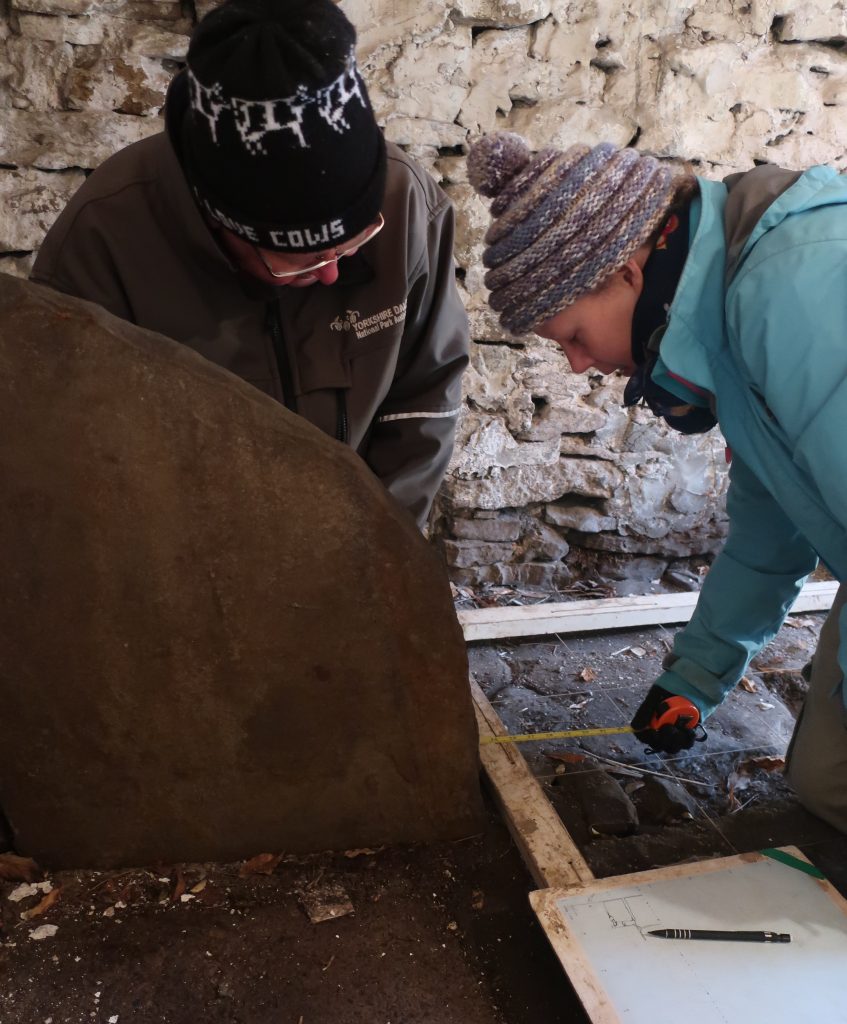 Our volunteer was wearing a fab hat – “I love cows”!

The adjacent storeroom and pigsty were surveyed using a much simpler method. First a sketch of the plan of the room was drawn then measurements were noted onto the sketch. Measurements were created from using a tape along the walls and recording any features along the way. For the granary store above we used a disto rather than measuring tape. [A disto is a hand-held laser.] These plans will need to be produced to scale back in the office. However, the plan of the byre was created to scale on the day so this can be scanned and traced straight into the computer. In addition to the measured survey, the exterior and interior of the buildings were photographed.

Pigs could be frequently found on the dairy farms of Wensleydale. In part because they were fed the whey (the waste from the cheese making process). The two rooms for pigs on the farms suggests there might have been around 4 pigs there (but it will be interesting to see if any figures can be found in the research). It was great to see the feeding chutes still in place and the internal stone trough. 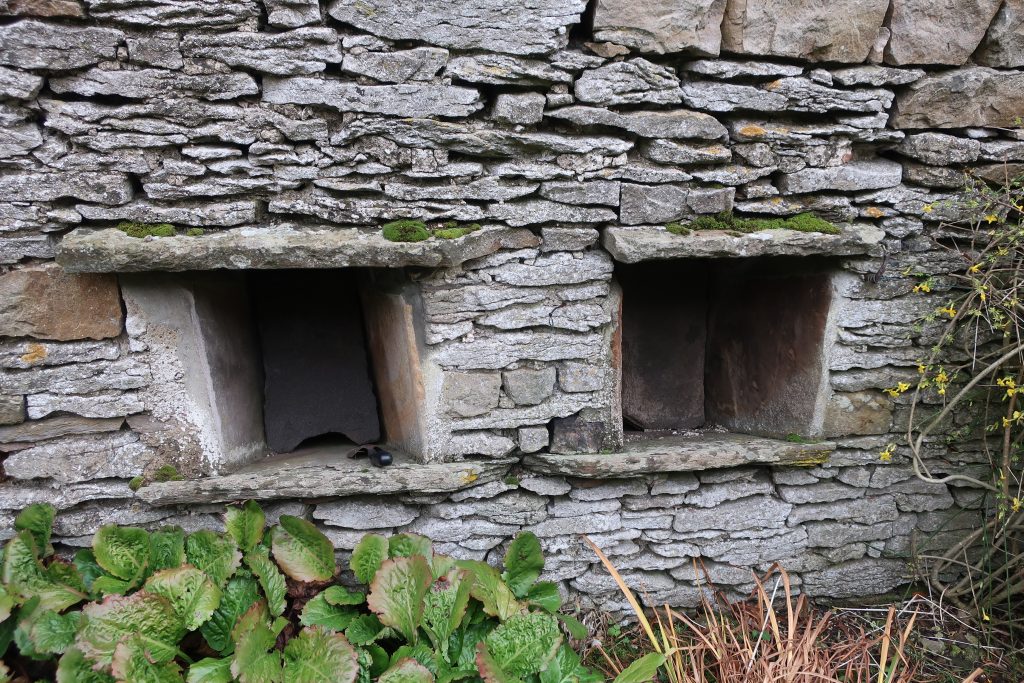 The pig chutes enable feed to get into the trough without risking hands and fingers.

Kate and Lydia (from NAA) returned on Wednesday to survey the surviving cheese press and dairy room inside the farmstead. This included recording measurements on sketches of the room and the features. 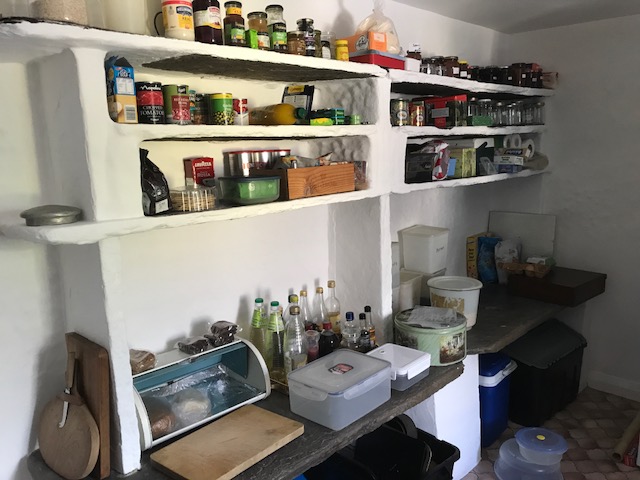 UPDATE We’re delighted to say that we now have the full survey report.