John Simpson has farmed man and boy at Gildersbeck Farm, near Agglethorpe for over 50 years. Marjorie Iveson recorded his memories of how the farm has changed over those years for the Dairy Days project last September. 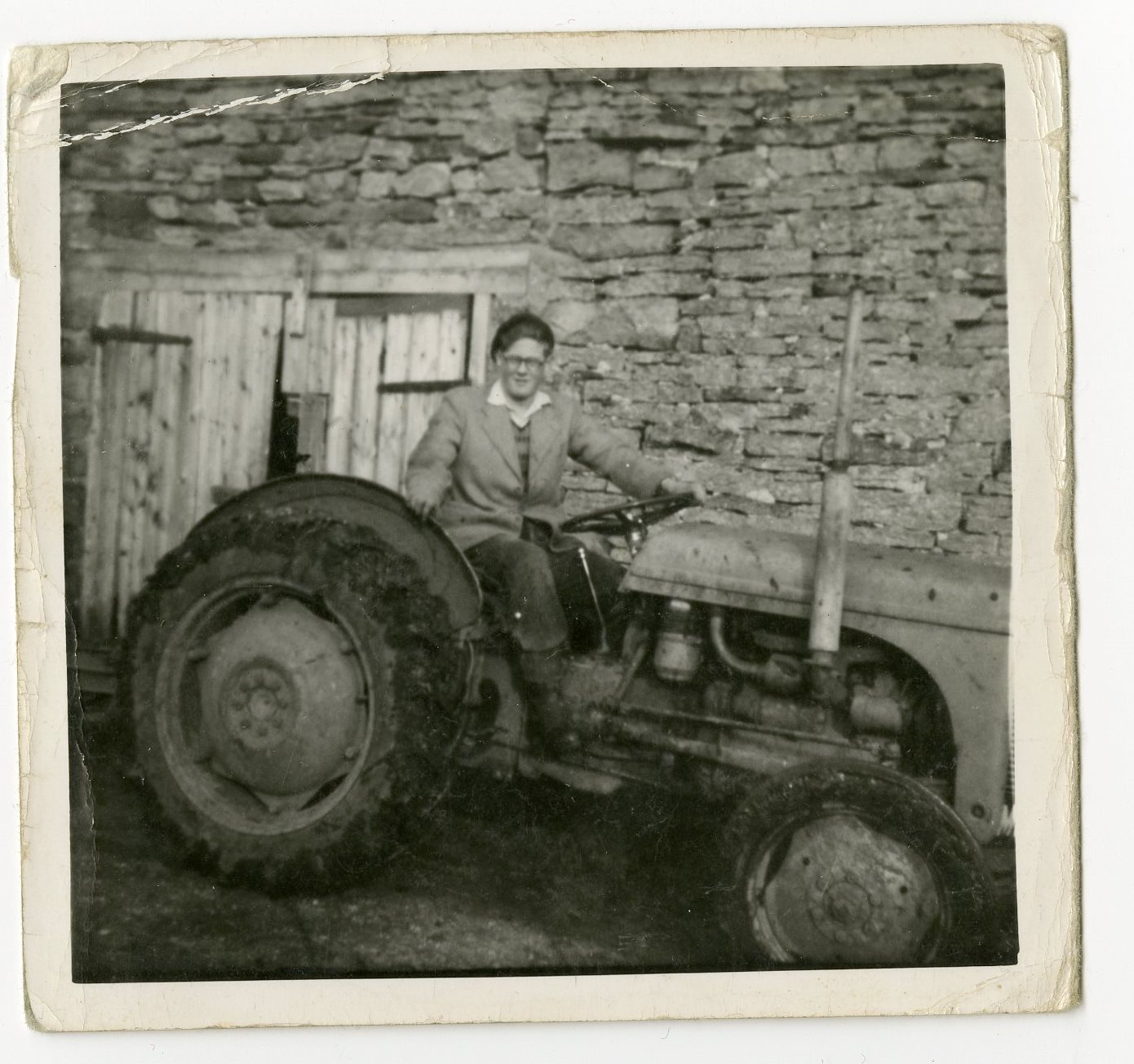 John Simpson as a young man at Gildersbeck Farm. Courtesy of John Simpson 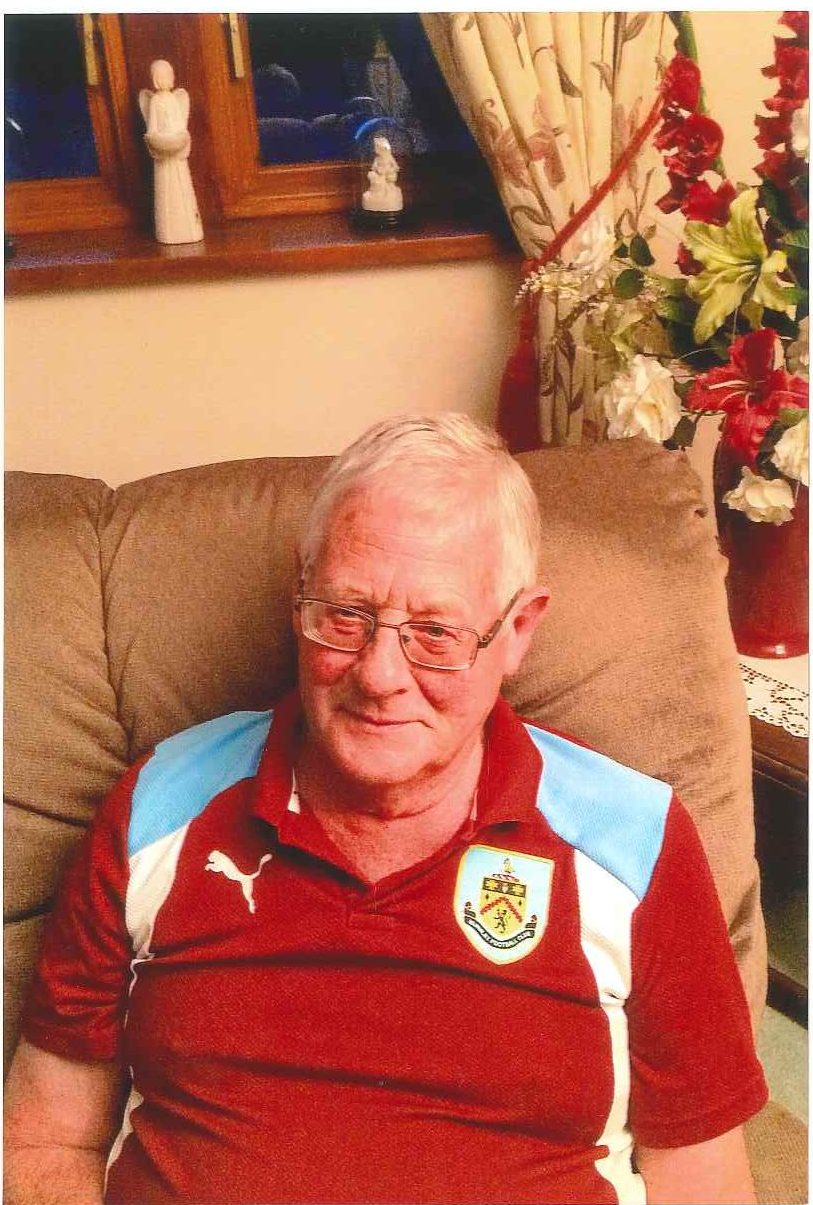 The farm came into the family after his grandfather was forced to move from Nidderdale:

“…m’granddad came there in about 1920. The farm he was farming in Nidderdale was flooded for reservoirs, so m’dad says he can remember, they walked over into Coverdale with a few cows and bits of machinery in 1920.”

His earliest memories are of learning to milk cows by hand with his father and mother, as he explains in the following audio clip:

He describes how his father made the changeover to British Friesians in the audio clip, and how the pedigree breeding line is still maintained on the farm today. He lent us some photographs of these early milk cows at Gildersbeck. 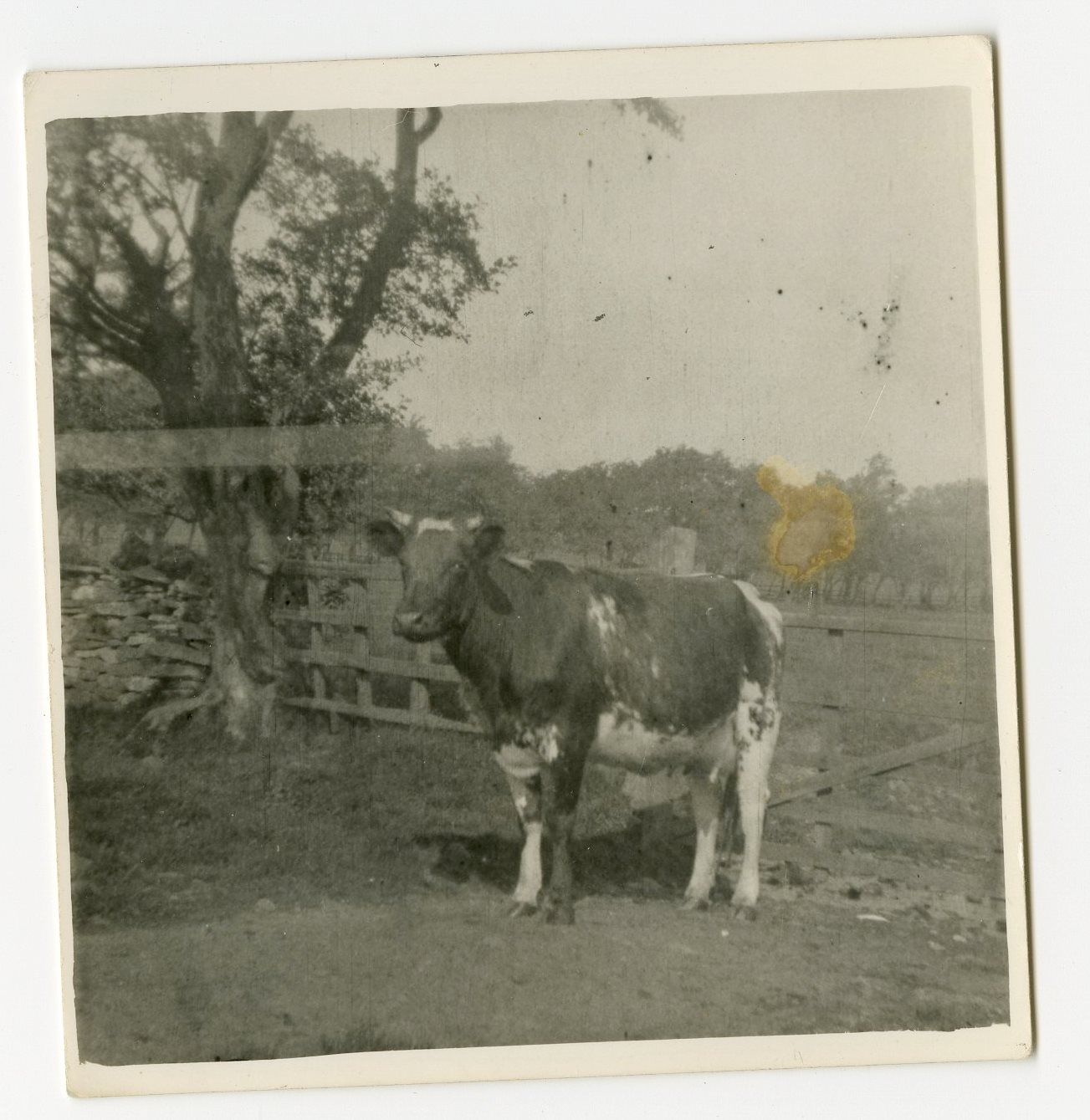 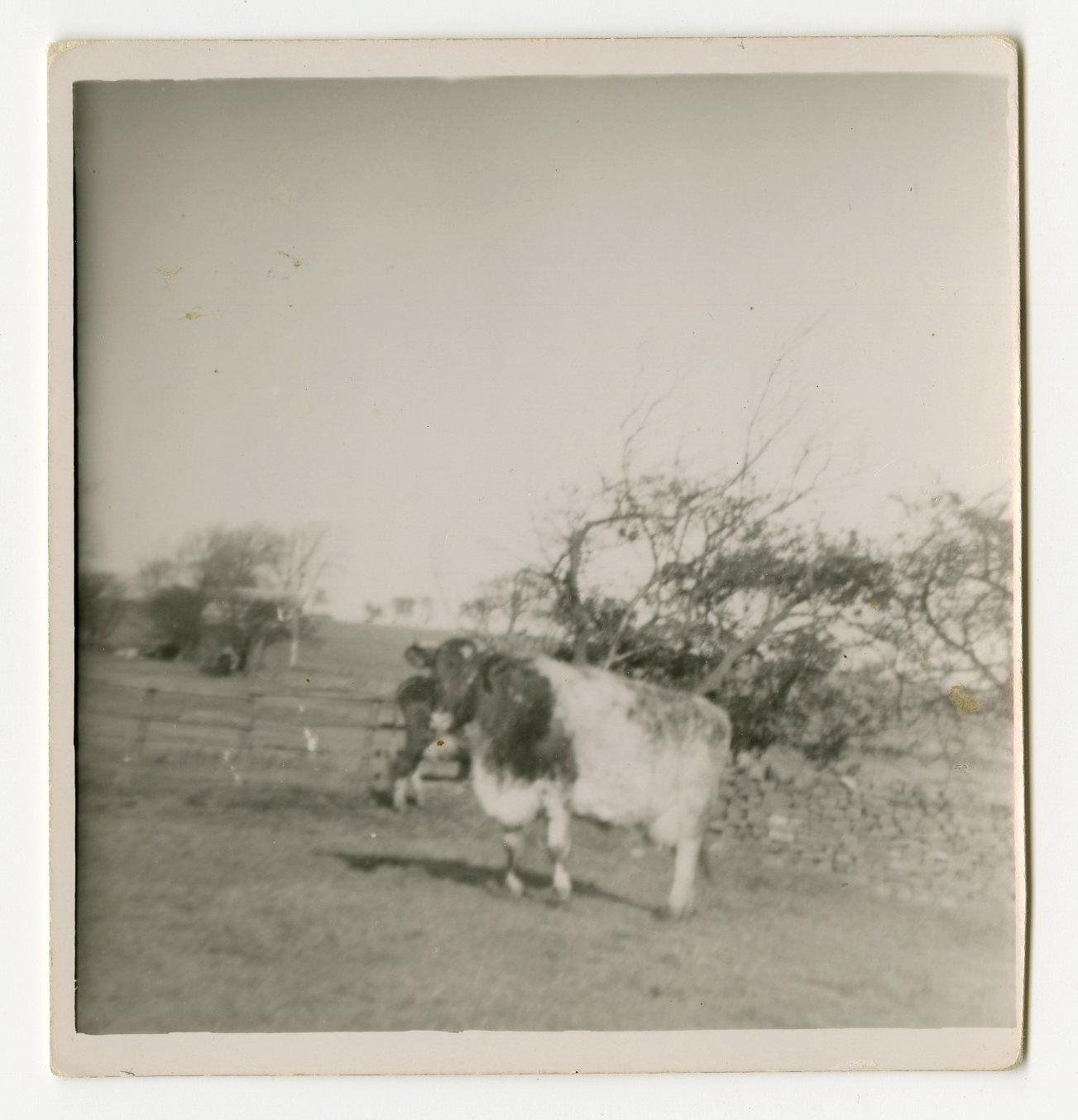 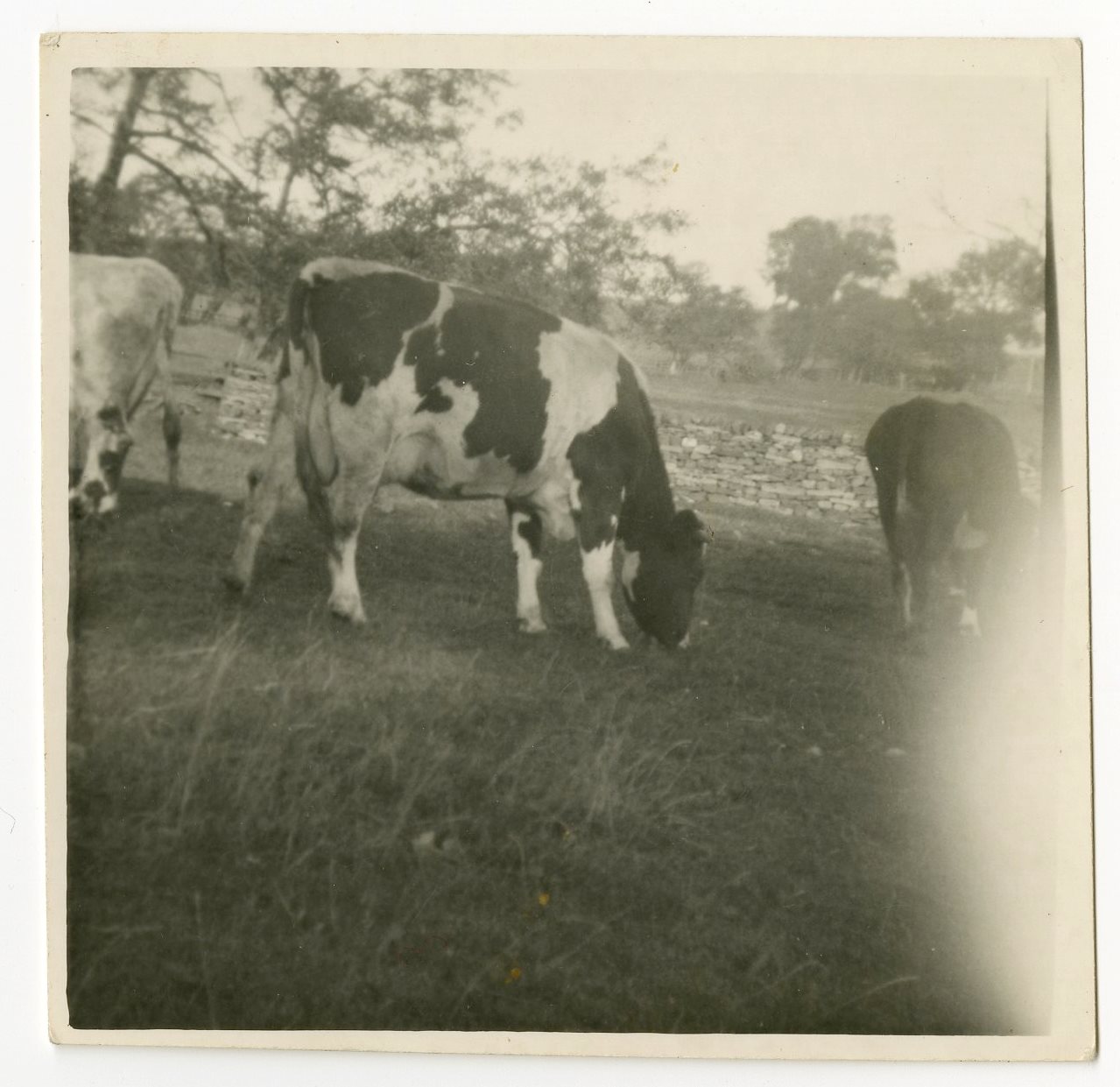 His parents Richard and Annie seem to have made quite a team:

“M’mother always did a lot of work on the farm with her hens and helping whatever we had and we did employ someone for seven years ‘til I was sort of old enough and strong enough [laughing] t’do physical work”
John Simpson (75), formerly of Gildersbeck Farm, Agglethorpe

He talks about how remarkable it was that his parents could make a living off such a small farm with so little stock, in the following audio clip: 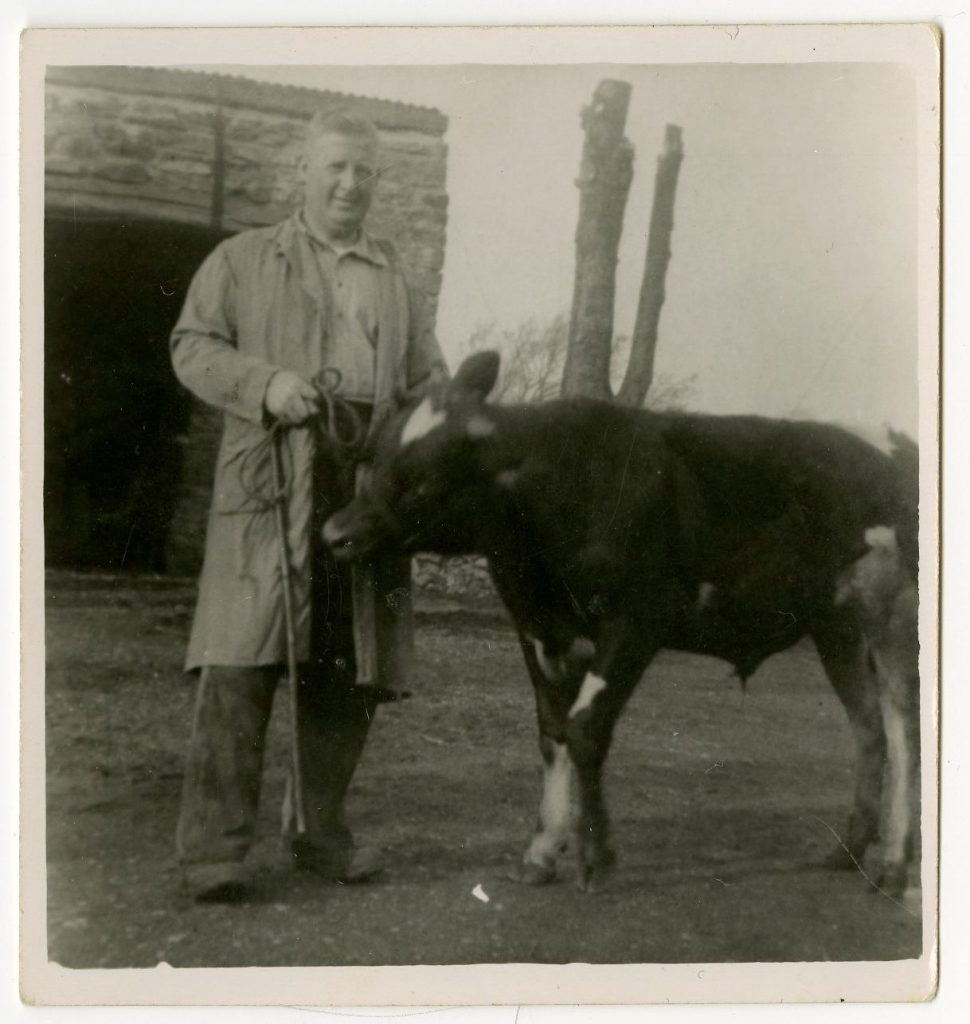 Dick Simpson in the yard at Gildersbeck, unknown date. Courtesy of John Simpson

The cows were fed on hay made on the farm and some supplementary feedstuffs were added as time went on. The work was hard:

“And the cows were always mucked out by hand, there was nothing mechanical about that and the feeding, sort of altered slightly, we used t’feed them sugar beet as well and sometimes brewer’s grains which is all had t’be carted in by hand. And this, sort of went on and we must’ve got a decent price for the milk.” 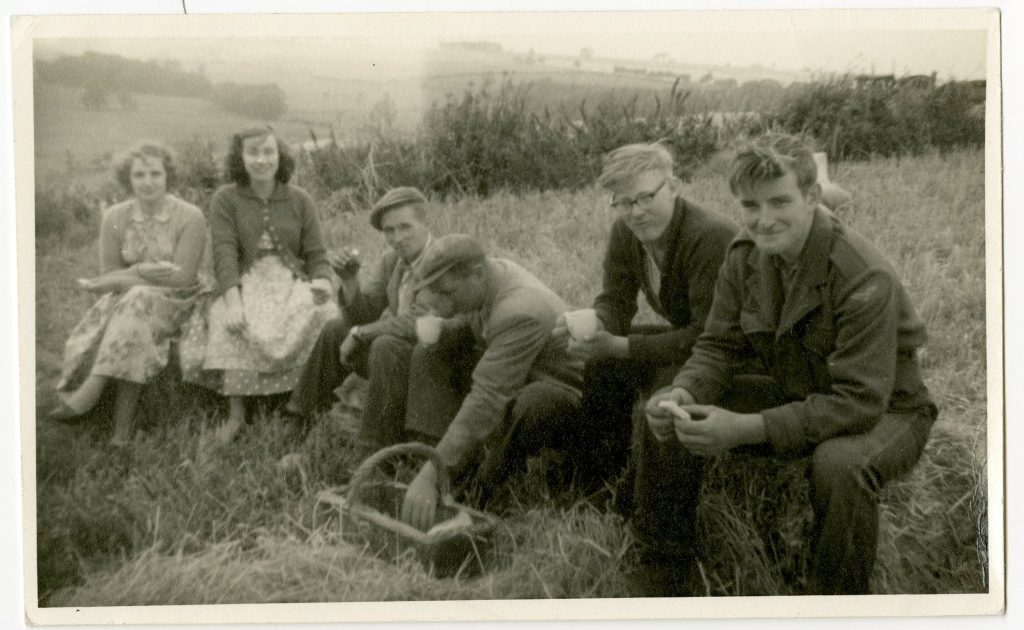 His parents were clearly very supportive of him and allowed him a say in how things were done on the farm from quite an early age. As the price of milk fell, they all saw that the writing was on the wall for small, traditional farms and under John’s influence, started pushing up cow numbers from the original herd of about a dozen cows:

“And then, flippin ‘eck, we built, we put a cowhouse up for forty-four, which was absolutely unheard of in those days, with pipeline milking. Oh I should’ve said at the start that the cows were tied up by the neck with chains in wooden partitions and then it’d be somewhere in the 50s the wooden partitions were taken out and put concrete ones in and then we went to TT [Tuberculin Tested] testing ‘cos up t’that time y’weren’t TT tested, the milk, and y’had t’do these improvements which you got a little bit more for y’milk, if y’had TT tested.” 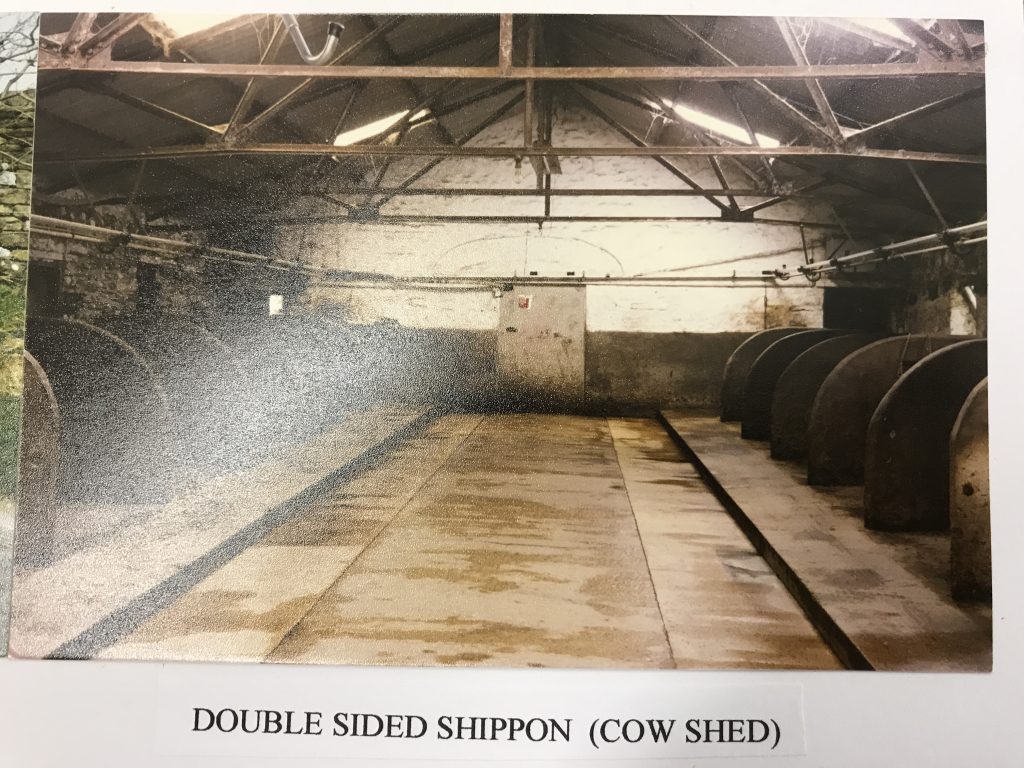 John married in 1970 and his wife Margaret was clearly a great asset to the farm, which continued to expand.

“I got married in 1970, and the cow numbers had got up to about eighty I would think and Margaret and I employed someone. Margaret always worked out that side.”

Shortly afterwards he went into partnership with a neighbour and the  herd numbers increased still further:

“I looked after the cows and m’partner looked after the sheep and this sort of went on until 1989 when we split partnership ‘cos we both had sons that was leaving school, both very keen and it was better t’go on your own. Oh, m’dad bought a farm in 1968, a hundred acre farm at Carlton. I should’ve said my first recollection we had about 150 acres at Gildersbeck. And of course, then we started making silage instead of hay which was a better food for cows, was very highly mechanised…clamp [silage], that was before baled silage had come in…it was more machinery intensive, but the cows certainly did better…off silage, yeah, if you could get over the smell, but after a while you don’t smell it [laughs].”

John isn’t sentimental about the old ways. He remembers horses being on the farm but the tractor they acquired in 1949 was much more his style. A photograph of a later model is labelled ‘Pride and Joy!’ 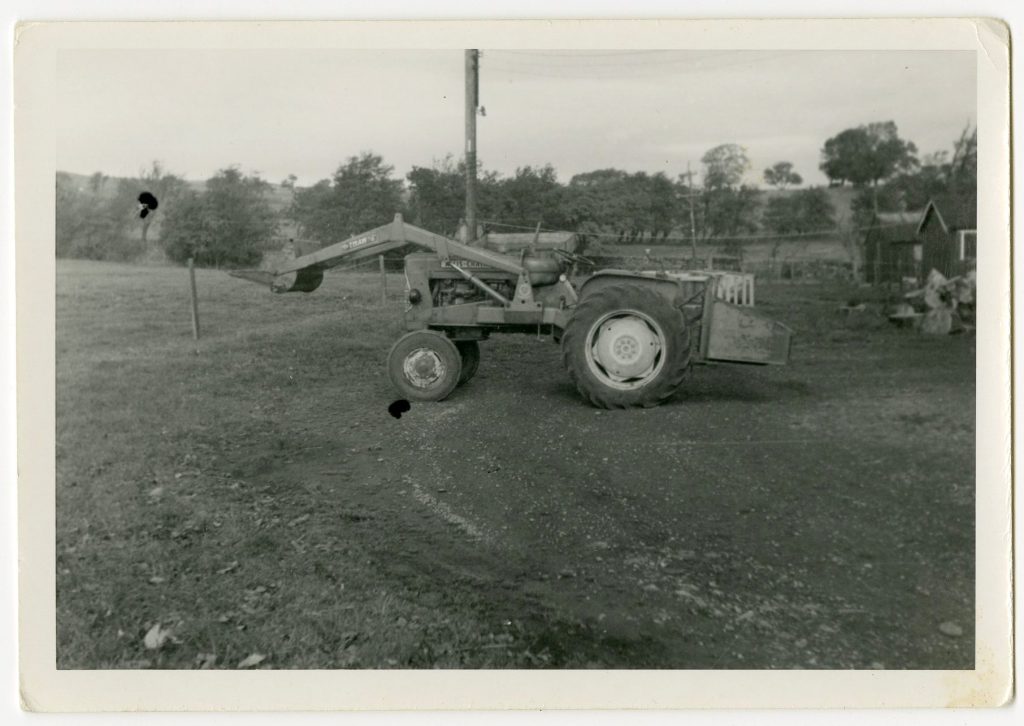 John is particularly dismissive of traditional hay meadows. As far as he is concerned, silage is much better for getting the highest milk yields:

“I know people like t’think a bit about traditional hay meadows and all this but whatever people tell you, there was no goodness in them, the stock wouldn’t milk off them, the sheep wouldn’t do well off them. Y’had t’have modern reseeding and things like that.”

The continuing drop in the relative price of milk causes him much dismay as he describes in the following audio clip:

John’s son now runs the farm and has expanded both the herd and the acreage, they milk around 600 cows nowadays, a very far cry from the original handful of dairy shorthorns walked over the hills from Nidderdale to Coverdale all those years before.