Woodlands in the Dales:  the backstory to the big story

As with any big story when it appears in the media it attracts comment.

When the Yorkshire Dales National Park Authority announced its ‘landmark collaboration’ with the Woodland Trust in January it caused both delight and some concern.

One member of the public wrote in to say, ‘Hope you do not plant too many trees. The greatest charm of the Dales is its open space.’

The landscape of the National Park is not strictly ‘open’, in the sense that much of the land is enclosed with dry stone walls, but the point is taken:  it is largely treeless, with only about 4% of the area covered in woodland compared with 10% for England as a whole.

Another member of the public, however, wrote that, ‘The one thing that puts me and my family off from the Yorkshire Dales is lack of trees. This [woodland creation] will be a huge benefit to the current landscape.’

The intention of the partners behind the Dales Woodland Strategy 2020-2030 would be to please both correspondents.

They want to create 6000 hectares of woodland habitat in the Yorkshire Dales National Park by 2030.  That means creating 600 ha of woodland per year on average.  In the past 25 years, by contrast, an average of less than 100 ha per year has been planted.

Yet even if the ambition is realised, woodland will cover only 7 per cent of the National Park.  As the Dales Woodland Strategy says, the guiding principle will be ‘the right tree in the right place’.

Some parts of the National Park are not suitable for woodland for a range of reasons including the need to protect upland hay meadows, habitat for wading birds such as the curlew and the huge areas of blanket bog (and the carbon stored in them).

The debate on woodlands has led me to wonder: is there a right amount of tree cover for the National Park?  Or, to put it another way, what would be the most ‘natural’ landscape for the Dales?  These sort of questions are sometimes posed on our social media channels.  So I thought it might be time to research the backstory to the big story.

The area we now know as Yorkshire Dales National Park was once covered in dense woodland.  ‘Dense’ may be best understood as a mosaic of woodlands rather than one closed-canopy forest, as the ‘wildwood’ would have been shaped by browsing animals such as deer and predators such as wolves.  But this period of dense woodland was a long time ago; it started around 12,000 years ago when the climate warmed and the last ‘Ice Age’ came to an end and lasted for around 6,000 years.  Then when people moved in, woodland clearances began.

Placenames can make an illuminating contribution to the backstory.  Much of the Yorkshire Dales National Park – 42% of it – is moorland (see p.9 of the Yorkshire Dales National Park Management Plan). ‘Moor’ is a word brought to the Dales by Anglo-Saxon settlers in the sixth century.  ‘Mor’ was a treeless, uncultivated expanse (R.W Morris Yorkshire Through Placenames, 1982, David and Charles).

This tells us that by the time the Anglians arrived 1500 years ago, the moors of the Dales looked much as they do today.  In other words, at some points between 8,000BC and 500AD, great swathes of woodland on the tops of the hills were cleared.

R.W Morris narrows down the timeline: ‘Throughout prehistoric times upland and lowland areas alike presented a landscape of extensive woodland.  In these forests the Neolithic farmers who arrived about 3000BC began making clearings by burning the trees and felling them with stone axes’ (p.77, ibid).

Another scholar, Ben Rawlence, adds more detail by writing that management of the forest through felling, clearing or burning for game ‘set the stage for the creeping blanket bog that has become upland Britain’s signature landscape’ (p.16 The Treeline, 2022, Jonathan Cape).

This tallies with what is known about blanket bog peatland (moorland) in the Yorkshire Dales.  In some places the peat measures 4-6 metres deep.  One metre of peat is thought to take a thousand years to form.  The blanket bog peatlands in the National Park do appear, then, to have begun to form at the same time as those Neolithic farmers were clearing woodland from the hilltops.

What placenames may further reveal is that parts of today’s National Park were cleared of woodland earlier than others.

Peter Metcalfe has written that nearly all the names of settlements and landscape features in the Dales were given by the Anglo-Saxons from the sixth century AD or by the Vikings from the ninth century AD (Placenames of the Yorkshire Dales, 1992, North Yorkshire Marketing Ltd).

From this he concludes that when the Anglo-Saxons began to arrive 1500 years ago ‘trees were rare in Craven’, because Craven (the district covering the south of the National Park) has few placenames concerning woodland (p.3, ibid).

Some of the more northern Dales in the National Park, however, such as Wensleydale and Swaledale, may still have been extensively wooded when the Viking settlers came (emphasis must be placed on the word may in this sentence).

To switch back to R.W Morris, he says, for instance, that ‘At the entrance to Wensleydale stand the villages of East and West Witton.  A 12th century spelling suggests a derivation for widu or wudu [the Anglo-Saxon words for wood].’  Witton means ‘the town in the wood’.

Dozens of Wensleydale and Swaledale placenames might suggest that settlements were carved out of woodland.   Woodhall near Askrigg is an obvious one, meaning the ‘hall or residence in the forest’. ‘Satron’ in Swaledale means ‘the wood cleared for pasture’, while ‘the two farms named Shaw and Hurst, north of Reeth on the side slopes of Swaledale, give an idea of the altitude to which this woodland grew, for the names stem directly from the Anglian woodland terms sceaga and hyrst…with the farms at 1,000 and 1,240ft respectively’ (p.89, ibid).

By the time all England was conquered by the Normans in 1066, most of the woodland had gone.

‘The great [Domesday Book] survey of 1086 makes it perfectly clear that England was not very wooded,’ says Oliver Rackham (Trees and Woodland in the British Landscape, 1976, J.M Dent; quote from p.48 of the 2020 edition published by Weidenfeld & Nicolson).  Rackham suggests that in the North Riding of Yorkshire about 12% of the land area was covered in woodland in 1086.  By 1895 that had fallen further to 3.9%.

If Rackham is correct, it means that the area of woodland cover in today’s Yorkshire Dales National Park is broadly the same today as it was at least 130 years ago, although the type of woodland will have changed.  Today, more than half the woodland cover is conifer plantation.

As well as placenames and history books, there are other clues as to where woodland used to be in the National Park.

In The Treeline, Ben Rawlence visits the Cairngorms National Park in Scotland and meets a conservation manager called Thomas McDonnell. He writes, ‘The soil is our main guide to where planting or encouraging trees stands a chance, says Thomas.  Wherever there are mushrooms, ferns, bracken and particular kinds of woodland plants like violets there was once forest’ (p.36, The Treeline).

According to this wisdom, you will easily be able to spot areas where there used to be woodland in the Yorkshire Dales.  The flanks of the Howgill fells in Cumbria in the west of the National Park, for instance, are bronzed with bracken during the winter.

There is no doubt that many more trees will be planted in the National Park during the next ten years.  The Environment Secretary in May 2021 set out ambitious national targets for woodland creation, as part of the government’s response to the climate emergency.  Contributing to that response is a central role of National Parks in the 21st century. As a result, quite suddenly a variety of schemes have come into place that make woodland creation a financially attractive option for farmers and land managers.

Debate in the media will continue about the merits of tree planting in the Dales, but there is one thing that perhaps few people could disagree with: ‘the history of humans and the history of the forest is deeply entwined’ (p.15, The Treeline). 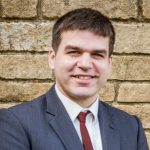 Andrew is the Authority's Media Officer

2 Replies to “Woodlands in the Dales:  the backstory to the big story”

Andrew is the Authority's Media Officer