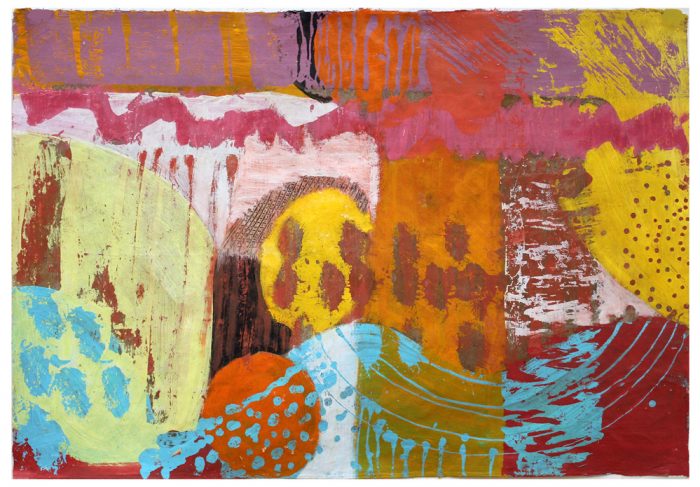 Debby Akam studied Fine Art at the Universities of Edinburgh, Northumbria and Sunderland. She has been based in Cumbria since 1999, and has shown her work in galleries nationally and internationally as well as undertaking many artist’s residencies. Recently, and especially during lockdown, she has been concentrating on painting and printmaking.

In 2020 Debby undertook an artist’s residency at Tasara Textile Centre in Beypore, India, where she began to work on a new body of work. These paintings are investigations of layered space through colour relationships that result in representations of stilled action or vitality. They suggest the possibility of colour being a language in itself, working as a correlative for emotions: pointing to meanings without illustrating them.

Inspiration comes from diverse sources: textiles and temporary wall decorations from India, often made by women, musical rhythms and the textures and colours of the countryside in the Eden Valley. The paintings are about being in the moment: going back to Debby’s childhood in Borneo, and forward into the unknown all at once, and making paintings where memory, experience and imagination can coalesce.

Tintotem Parade is a group of sculptures Gary describes as a Counter Monument, as they reference architectural motifs and images typically found and commemorated in the traditional Public Monument. However, rather than celebrate notable people or military victories Gary has chosen instead to revise and examine this convention in a playful critique of the hubris often associated with their grandeur. Gary’s alternative collection of monuments while still utilising plinths, the pedestal, different kinds of columns and towers are not for example made of stone or bronze, but stacks of discarded tins, transformed by colour to celebrate the value of upcycling. Atop each of the sculptures are displays of transformed, but familiar objects, such as teapots, toy soldiers, figurines, bowls, or distorted watering cans. Instead of a monument to a singular hero Gary has chosen these symbols to suggest what other totemic objects, events and new ideas we may now share, revere, fear, or contemplate.