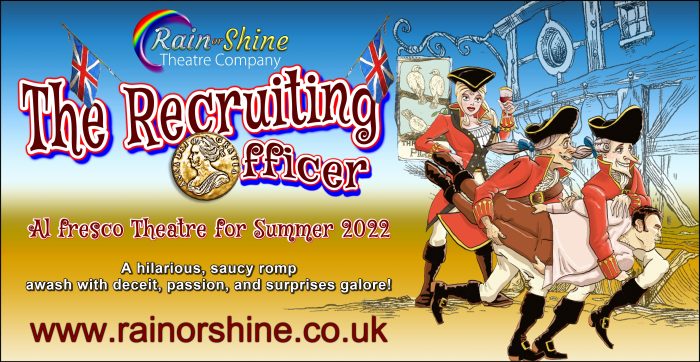 One of the most popular plays of its time (more performed than Shakespeare or Farquhar’s contemporaries) this is a delightful romp through 18th Century Shrewsbury.

“Had I but a commission in my pocket, I fancy my breeches would suit me as well as any ranting fellow of ’um all; for I think a bold step, a rakish toss, a smart remark, and an impudent air to be the principal ingredients in the composition of a captain.”

The story follows the mischief of crooked army recruiting officers, Captain Plume and Sergeant Kite, as they head to the county town of Shrewsbury to persuade men to take the Queen’s Shilling by any means, legal or otherwise! Plume has set his cap at the richest heiress in town, the vivacious Sylvia, and their bumpy path to true love is mirrored by their closest friends, nervy, melancholy Worthy, and haughty, comically self-important Melinda. Help and hindrance come in equal measure from Captain Brazen, the foppiest of Fops. Be prepared for saucy shenanigans in a hilarious romp awash with deceit, passion, swordfights, and surprises galore!