We Dig Community Countdown to Christmas

2018 has been a busy year for the Historic Environment team. Part of this has been due to the post-excavation work of the We Dig Community. We thought we would celebrate the countdown to Christmas Day by sharing some of the results of the test pitting project in Bainbridge. We discovered over 12,000 finds! For each day of advent we will look at the project and review a selection of these finds. 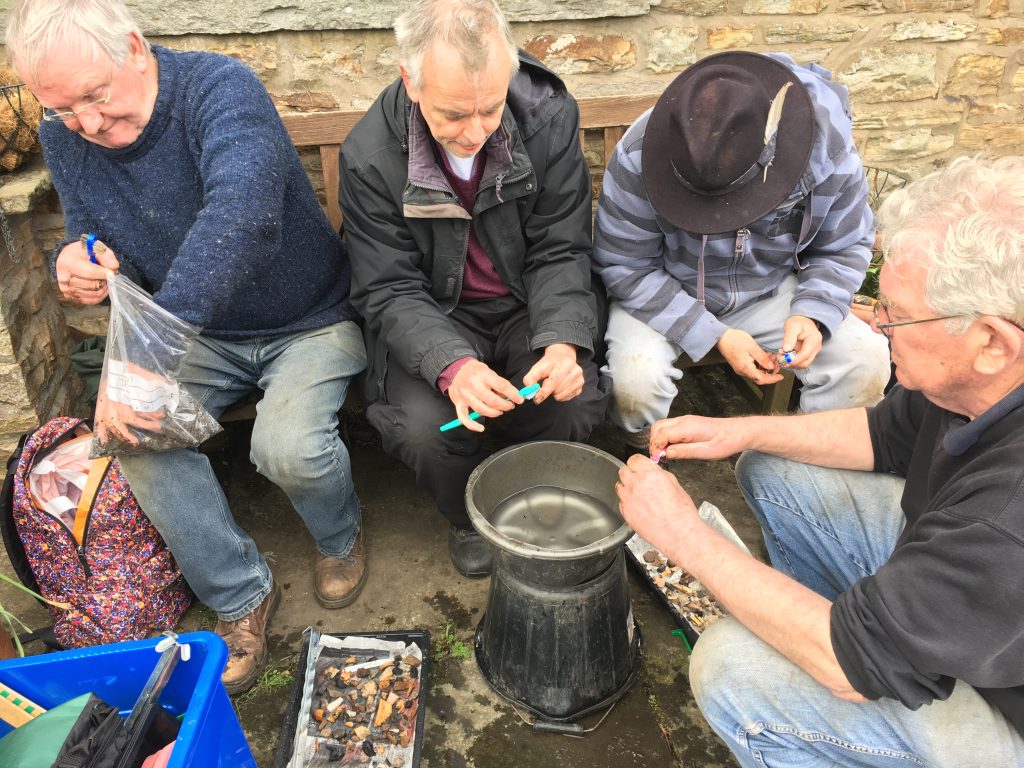 All 12,000 finds had to be washed, sorted and catalogued. This happened to the majority of them in three finds identification workshops

The We Dig Community project was undertaken by the Young Archaeologists’ Club through collaboration with the Historic Environment team at YDNPA. This was a test pitting project to explore the origins and development of Bainbridge.

2. What is test pitting?

Test pits are 1m² and excavated in 10cm layers called ‘spits’. Test pits act as random ‘windows’ into the past which give you the ability to explore a village through time (compared to opening up trenches). Test pitting is great because everyone can get involved. Test pitting is also relatively low impact. The turf is removed in small squares so that it can be easily replaced once the pit has been excavated. This meant no JCB diggers like you might see on Time Team! 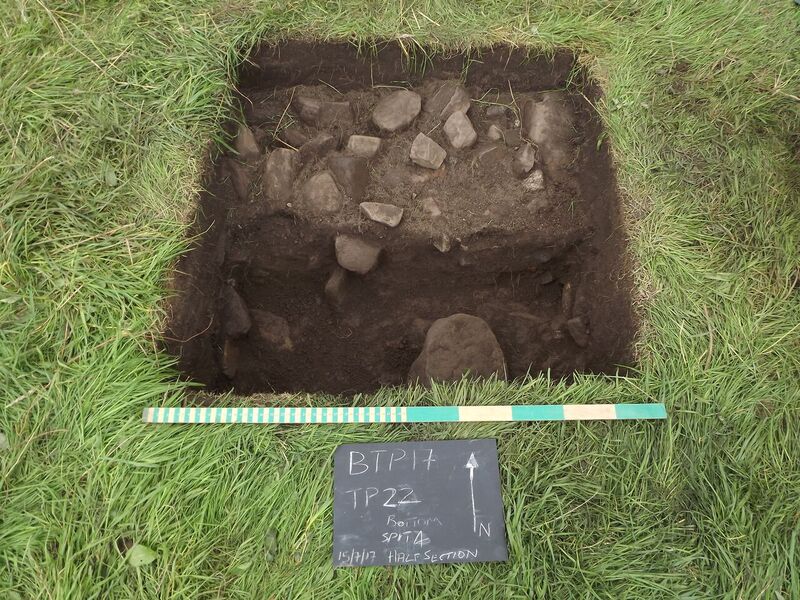 30 test pits were dug in total.

The YAC is the only UK-wide club for young people (up to the age of 17) who are interested in archaeology. The Yorkshire Dales branch was started in 2006 and is based at the Dales Countryside Museum. They meet one Saturday every month and have a very varied programme. This has included being involved in every stage of the We Dig Community project. As a result of the project there were three more members and one new YAC leader. Find out more about the club including how to join here. 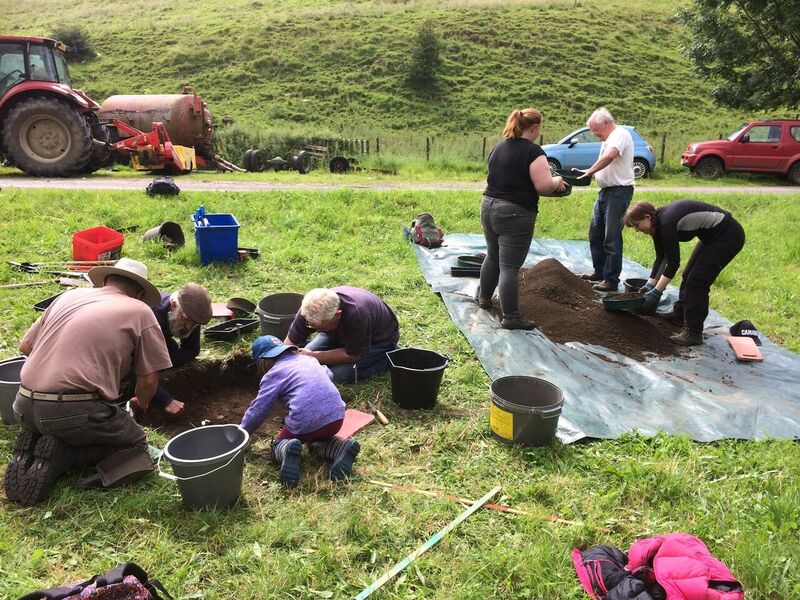 Nearly all the spoil excavated from the test pits were sieved (some even by hand).

The project had so much community involvement. In total over 200 people of all ages carried out almost 300 days of archaeological investigation including excavation, finds washing, sorting and cataloguing. Over 150 children engaged with their local heritage: of course the YACs, but the Young Rangers also attended several days as well as a few local schools (Hawes Primary School and Bainbridge, Askrigg and West Burton Federation of Schools). This involved a chance to have a go at digging and sieving but the Community Heritage Officer also ran sessions in local schools about archaeology – both generally and in their local area.

Bainbridge is situated in Upper Wensleydale where the river Bain joins the river Ure. The river Bain is the shortest river in England. (Bain is the ‘short or helpful one’ in Old Scandinavian). We already knew something about the fascinating history of Bainbridge – principally about the Roman fort. But the findings of the test pitting project emphasised that it has been the centre of trade and movement for centuries. It has been the final destination of material imported from within England as well as mainland Europe – despite its remote location in the centre of the Yorkshire Dales. 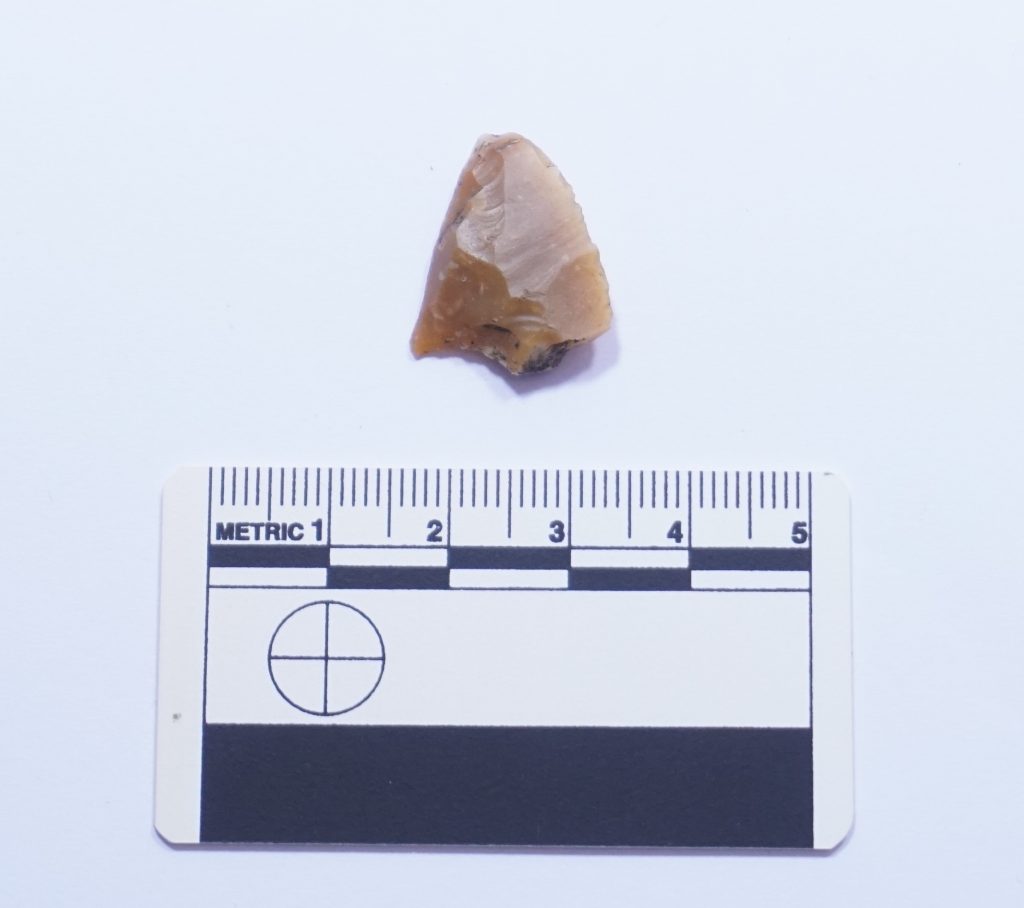 Evidence for prehistoric activity can be very elusive. But keen eyed diggers spotted a small number of worked flints, one of which was a broken arrowhead. More specifically, it was an ‘Oblique arrowhead’ which dates to the Late Neolithic to Early Bronze Age – some 4,300 to 5,000 years ago. (Wow!) This asymmetrical arrowhead would originally have been attached to a wooden shaft, and may have been lost when it was fired during a hunting expedition. Flint is not naturally found in the Yorkshire Dales so it must have been brought in from elsewhere by movement of people or trade.

The Roman presence in Bainbridge is most apparent with the earthworks of the Roman fort. The fort, known as Virosidium, was occupied from the 2nd century until the end of the Roman period. The fort was not explored further as part of this project as it was extensively excavated during the early and mid 20th century. The lack of Roman finds was interesting in the village and suggests that the area now occupied by the settlement was perhaps used as agricultural land in Roman times. 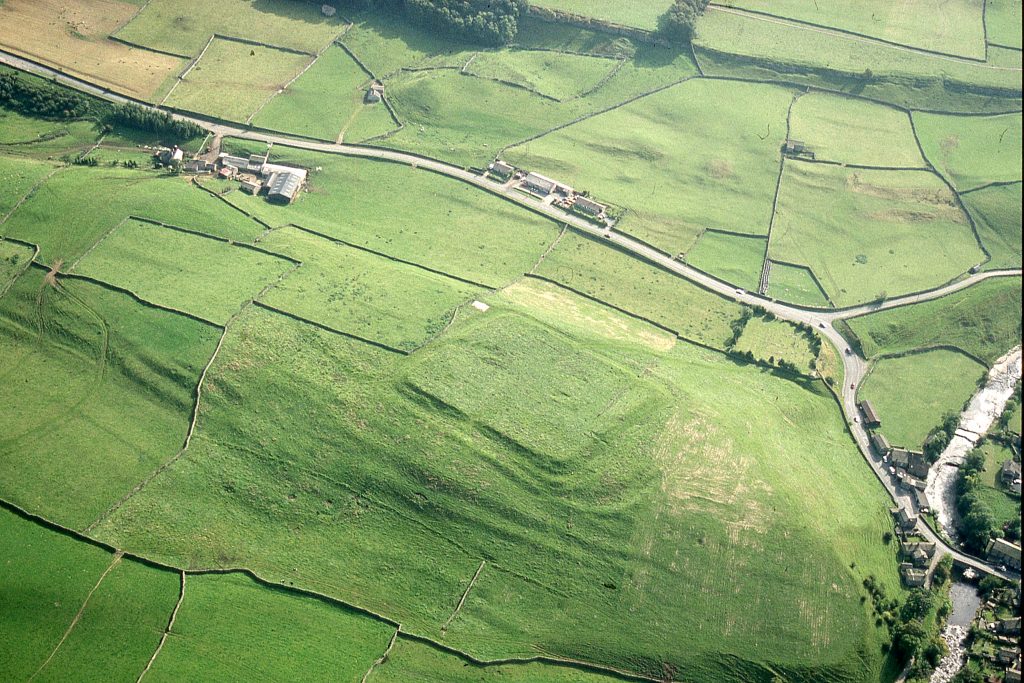 Our earliest pieces of pottery were two sherds of Samian ware dating to the 1st century. All the Samian ware was from South and Central Gaul (an area called Lezoux – in what is now modern day France). This better quality material shows how well connected a seemingly isolated fort was. Unfortunately with such a small assemblage it is not possible to determine what items are arriving as part of a trade network and what items accompanied the movement of people.

Only two sherds of mortaria were found. Mortaria are specialist ceramic vessels for grinding. One sherd was possible Crambeck White ware mortarium that could have been produced from the late 3rd century AD until the end of the Roman period.

The most important Roman find was an almost complete, but very crushed, pot. (We found about 80 fragments!) It was of a type known as Black Burnished Ware. This jar has been dated to the mid-3rd Century and located as coming from South-East Dorset. It is unusual for whole pots to be buried as it is only after they have been broken that they get thrown away and incorporated into the soil. So why was this whole pot buried? One tantalising possibility is that is was deliberately placed in the ground as part of a burial or cremation – a well known practice in Roman times. We also found other pieces of Black Burnished Ware – these were more likely to have been locally produced, and were dated as being from 120(AD) onwards. 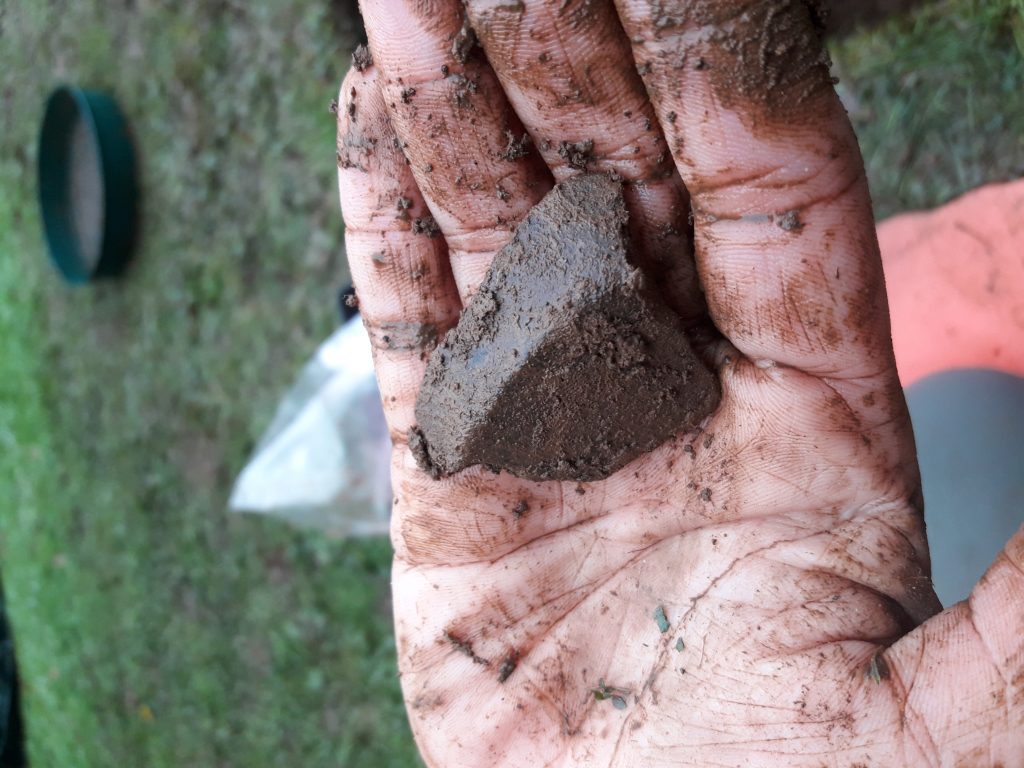 This is one of the larger pieces of the Black Burnished Ware jar to be unearthed by volunteers.

Did you know that Bainbridge was at the centre of a huge forest? In the medieval period, the term forest meant land that was preserved for hunting for the nobility. This might help to explain the low density of medieval finds from the excavations as relatively few people lived and farmed in the forest. The forest would have been a difficult and dangerous area to travel through. Every evening a horn was blown to lead lost travellers to the village. A replica horn was, until recently, still blown within Bainbridge during the winter months.

We uncovered a small glass bead that is thought to date to the medieval period. It is only 8mm in diameter. 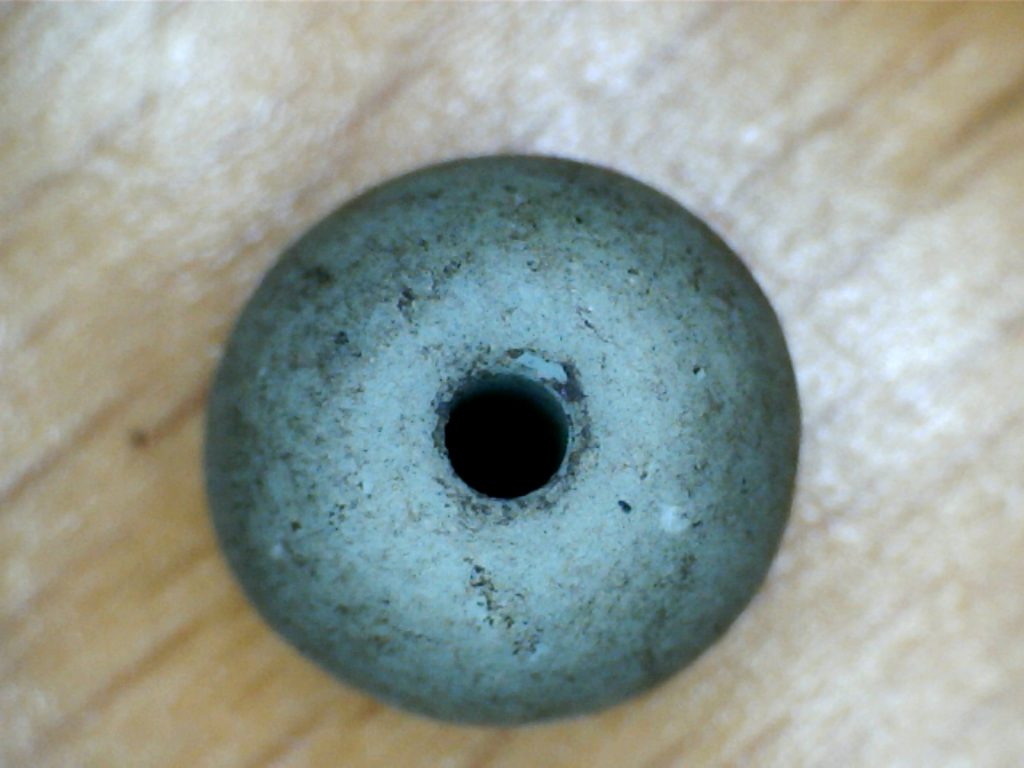 Due to its small size, the microscope camera catches this bead much better.

We found a fragment of pottery that was part of a handle that dates to the 14th or 15th century. What is really amazing is you can see the potter’s thumb mark from where it was attached to the main body of the jug. 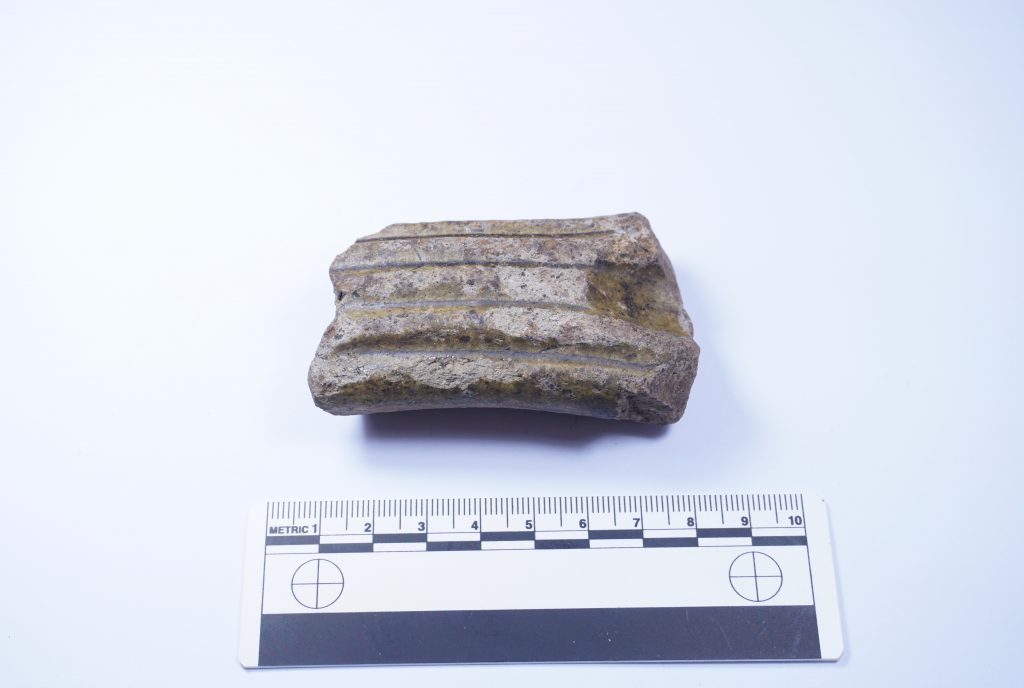 There is still remains of green glaze on this fragment of pottery handle.

The greatest number of finds from this project date to the post-Medieval period. They clearly show the fascinating detail of people’s everyday lives – reflecting different activities, diets and how events on the world stage had an impact on Bainbridge. 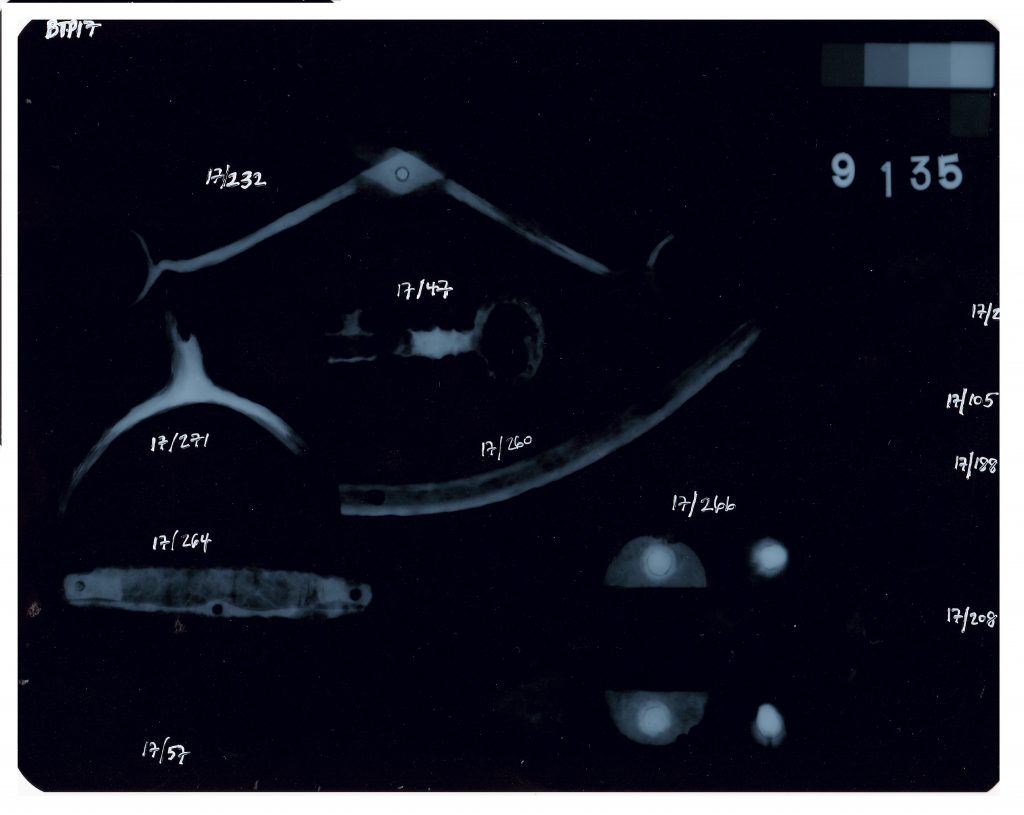 We sent some of our metal finds off to be x-rayed. It was disappointing that some of the finds did not show up, however we can see a number of finds including – a pair of scissors , key, spur, knife, part of window furniture, and a lock.

We uncovered a partially broken iron sickle on the village green. This was one of many items that could be related to the agricultural practice that has taken 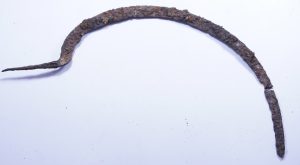 place in the village for centuries. The development of agriculture could be linked with both the quantity and quality of 18th and 19th century pottery found in Bainbridge. The rapid increase in pottery may well reflect the economic and population growth of the area. A particular boost in growth could have resulted from an increased demand for wool for the army and navy during the Napoleonic wars (1799-1815). 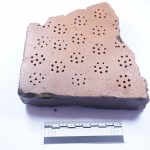 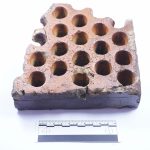 We found a lot of small fragments of cooling brick, however we also uncovered some large impressive pieces. They are commonly used in the process of drying corn.

The assemblage of bone fragments were dominated by sheep remains which perhaps reflects the nature of the agriculture of the area with sheep being reared for both wool and meat. There were much smaller numbers cattle and pig bones, one possible bone from a horse and a few bones from chicken. [Bird bones generally do not survive well in the ground due to their lightweight nature and as a result are probably not accurately reflected.] On the whole the remains were a result of domestic consumption (and suggest they were prepared elsewhere). A small number of bones had traces of dog gnawing, which could show that they were either part of the dogs’ diet or that the material was lying on the surface for a period of time.

We found numerous clay pipe fragments that dated from the 17th to the 19th century. This mainly included fragments of clay pipe stem but we also uncovered some bowls. Smoking was once a luxury, leisure item. It is possible to date clay pipes from design and maker marks. You are able to roughly date pipes as older stems are usually thicker resulting in a smaller capacity for tobacco – this is because the tobacco was expensive (due to tax) so less was used. There is an introduction for how to date pipes here. 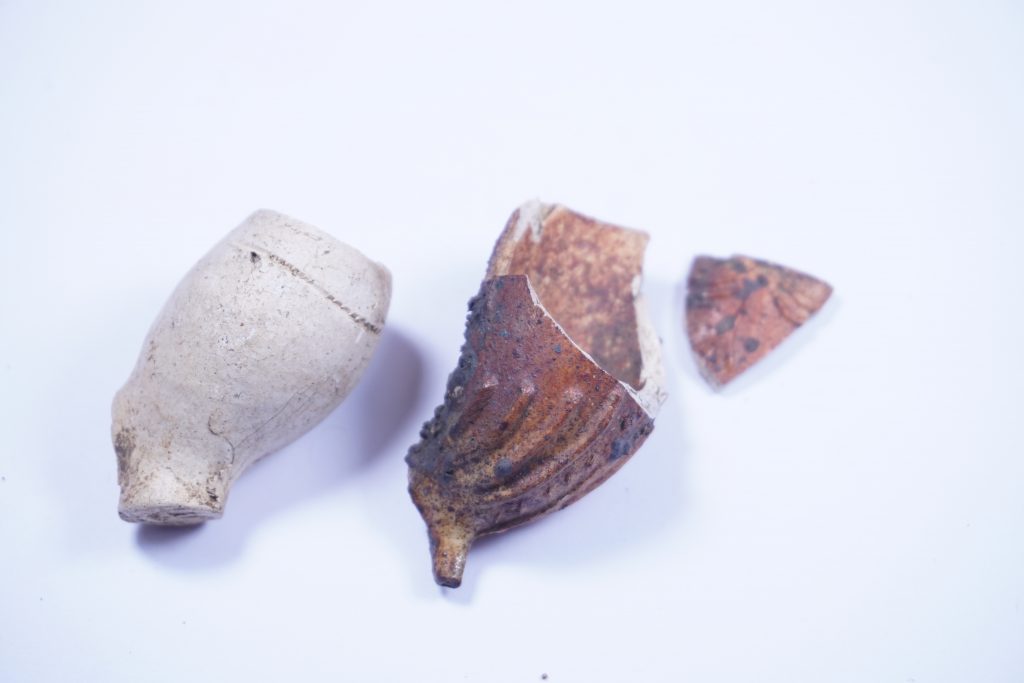 One discovery was a domino which probably dated to the 18th or 19th century. 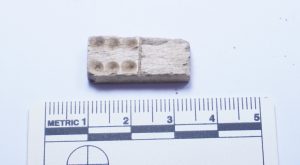 Interestingly domino tiles were also known as bones. This one is actually made from bone and is only 28mm long. This domino probably came from a child’s game  or a travelling set. 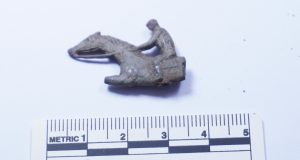 ‘parlour game’ called Totopoly. The counters were brightly painted lead alloy horses with jockeys. These were used to ‘race’ around the board and dates from 1938 onwards. The Totopoly counter we found had traces of yellow paint remaining. 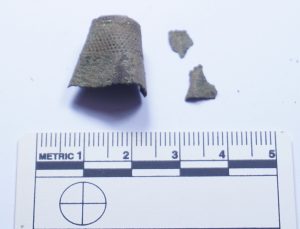 In the era before mass produced clothing people made and repaired their own clothes. Finds such as a copper alloy thimble and a pair of scissors showed this. 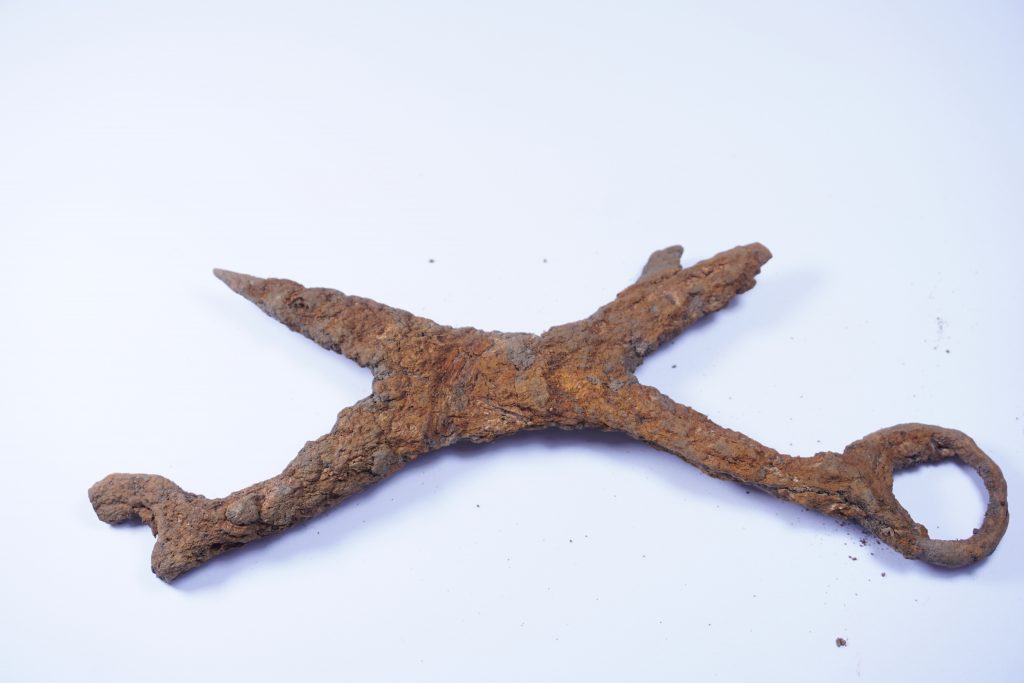 Many different buttons were recovered, giving an idea of the changing dress of Bainbridge residents. Working clothes had simple bone and mass produced stamped buttons. These can be compared to buttons with more elaborate decoration which would have adorned ‘Sunday Best’. Or buttons with rare materials such as jet – jet cannot be found in the Yorkshire Dales so was imported in. 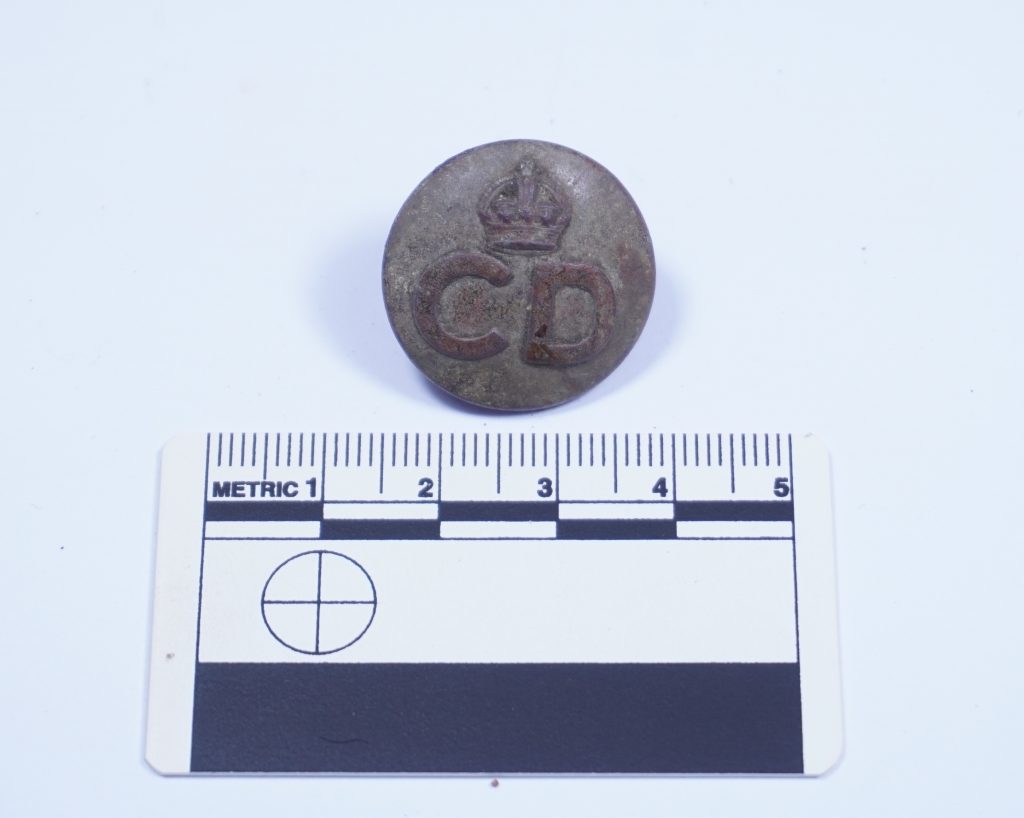 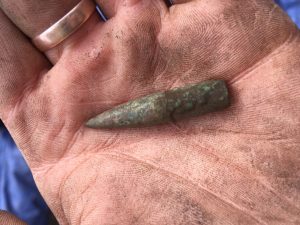 The bullet comes from a Lee Enfield 303 rifle which was the standard British Army rifle from 1895 till 1957. Based on the bullet’s flat bottom and pointed top it is most likely a mark VII or VIII. There was also a spent cartridge case that is a Greener .310 CK, and is one of the two cartridges 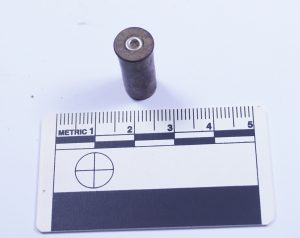 authorised by the British army for killing horses or cattle. It was first approved for service in November 1917. This perhaps suggests that soldiers were billeted here who had this authorisation or it is perhaps a civilian example and used by a farmer. [During World War Two soldiers were in fact billeted to Bainbridge – the school room in the Congregational Chapel.]

We would like to say a specific thank you to John Buglass who helped to put together much of this text, but also to everyone who was involved in the project including all the specialists who shone light on what we unearthed.

A major project that we are assisting with at the moment is the Dairy Days project exploring the dairying heritage in Wensleydale. You can find out about the project and how it is progressing on their blog. We are excited for what the New Year will hold for the Historic Environment team. Follow us on social media to make sure you know when new projects are announced. Alternatively email Hannah.Kingsbury@yorkshiredales.org.uk or Douglas.Mitcham@yorkshiredales.org.uk to get added to the mailing list.