We are the champions…

When I joined the Yorkshire Dales National Park Authority in September 2018, I took the responsibility very seriously and was totally committed to doing a good job – and one year on, even more so.

Not long after, I applied to be a Member Champion, and have now taken on the role of Member Champion for Corporate Management. This involves commenting on policies, taking a bird’s eye view of procedures, and helping champion officers’ work.

As I put pen to paper to write this blog I looked up the definition of ‘champion’ on Google. It is “a person who vigorously supports or defends a cause”, and that is exactly what a Member Champion’s role is. In the context of the Yorkshire Dales National Park Authority, translated, this means to support the achievement of the National Park Authority’s policies and objectives.

Member Champions all have very different backgrounds and all bring different skills and qualities to the role. We work closely as a group and I have already found that these six very interesting colleagues of mine are all dedicated to their area of the business, helping to drive forward the National Park in ever-changing times. They champion natural environment, promoting understanding, cultural heritage, recreation management, development management and sustainable development.

The key role for each Member Champion is to represent their area of work externally – for example, being the ‘public face’ of the Authority in the media. Other responsibilities include assisting officers with the implementation of the Authority’s policies, bringing forward new proposals, and also acting as a ’critical friend’ to officers in their work.

We bring some additional resource to the officers within the Authority, sometimes challenging the team, but more often than not giving support to officers in their work.  In other words an extra pair of hands, which sometimes brings a different perspective. Above all, we are passionate, enthusiastic and dedicated to the National Park Authority and what it is trying to achieve.

Since becoming Member Champion I have assisted with the recruitment of the Solicitor and Monitoring Officer, provided input to the performance reporting process, Audit and Review, and I am looking forward to getting more involved with local charity Yorkshire Dales Millennium Trust, which supports some great projects across the area.

My colleagues have been equally busy. Nick Cotton’s focus is on recreation management and he recently attended a Park Services workshop on the review of the National Park’s ‘special qualities’. After ‘walking and talking’ with the Head of Park Services, he suggested that the Yorkshire Dales National Park Authority should form part of the Borderlands Initiative. This partnership between the five cross-border local authorities of Carlisle City Council, Cumbria County Council, Dumfries & Galloway Council, Northumberland County Council and Scottish Borders Council promotes the economic growth and competitiveness of the area that straddles the Scotland-England border. Nick felt that this might assist with providing better broadband provision for our area.

Judith Donovan, Member Champion for Promoting Understanding, assisted with last month’s successful UK National Parks 70th Anniversary Conference. It was supported by other Member Champions and the wide range of officers involved in the tours and the organising of the event, which showcased brilliantly the Yorkshire Dales National Park. Read her blog on the event here.

In recent times, we have had to deal with the challenges of flooding in the National Park and a constantly shifting political climate. The team have all worked extremely hard to handle these events and it has been a real privilege for me to work alongside them, one year in.

Read Julie Martin’s recent blog about a day in the life of the Member Champion for Cultural Heritage.

Meet our 22 Members and find out about their roles at www.yorkshiredales.org.uk/members 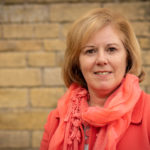