Walking the cows to milk

Have you ever been held up by a herd of cows being slowly walked up the road to be milked? It’s still a common sight in Wensleydale during the summer when the cows are grazing outdoors. Twice a day, come rain or shine they are driven to the milking parlour and then brought back out to their pasture. A hundred years ago however, and this would have been a rare sight. 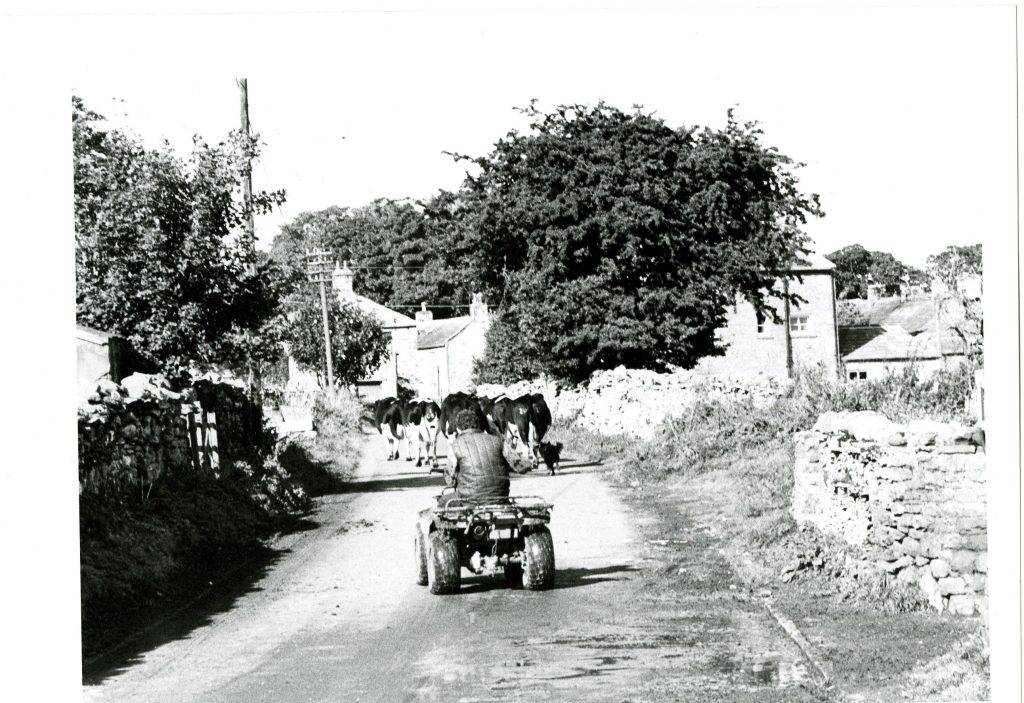 The development of mechanised milking parlours  centralised the process of milking after the Second World War along with increasingly stringent hygiene rules and regulations. However, one might have expected that walking cows to the farm to be milked would have been much less hard work than carrying gallons of milk back from the cows in the fields, as was actually the case during the summer months in Wensleydale in times gone by. 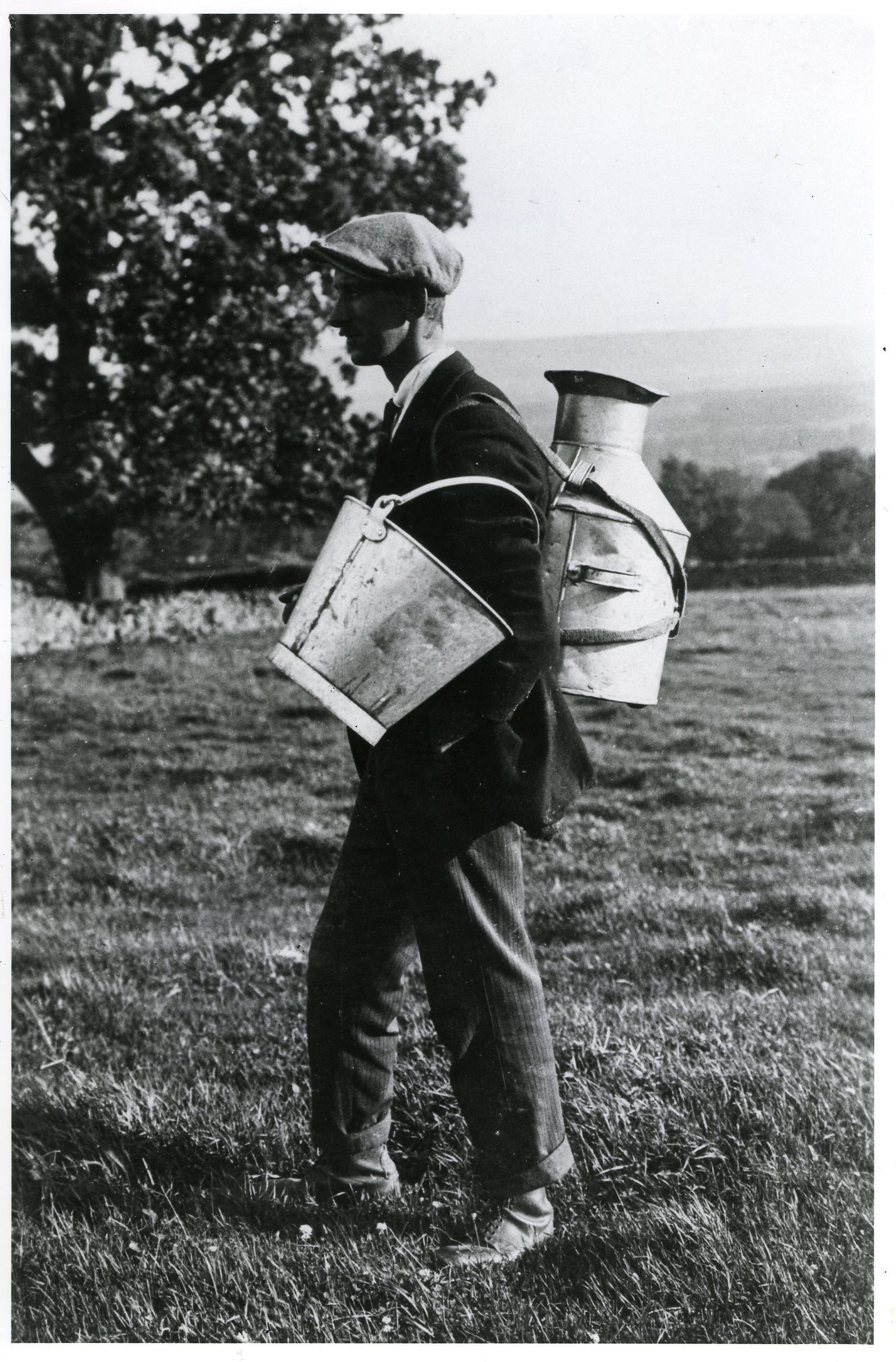 Thomas Park carrying milk from the fields in a tin back can. Redmire. Collection of Ann Holubecki

Local historian Ian Spensley has sent us this extract from an article about Preston under Scar published in the Leeds Mercury 1892, by way of an explanation:
“The cottagers, some of them miners, have two or three cows, and either own or rent three or four acres of grass land. For this they probably pay about £8 a year, and this includes what is called summering – that is, the pasturing of the cows on the hills from the middle of May to the end of September. During the whole of that time they are, after calving, on the open, and are never under cover, not even to be milked. In Wensleydale, instead of the cattle being driven to the milkers, the milkers go to the cattle. This means, of course, a weary trudge; but while the smaller owners often have the milk put into large cans, flat on one side so that it may be strapped to a man’s back like a knapsack, others put the milk into cans on a cart drawn by a pony. General and long experience demonstrates that to drive cattle a long distance to be milked does not increase the quantity of milk supplied, while the plan adopted in Wensleydale improves the quality of the milk and the health of the cows.“
William Pickering ‘Leeds Mercury’ 5th March 1892
As the Leeds Mercury article implies, some people used a pony or donkey to cart the milk rather than carry it on their backs. In early twentieth century Swaledale, one enterprising farmer used a motorbike! 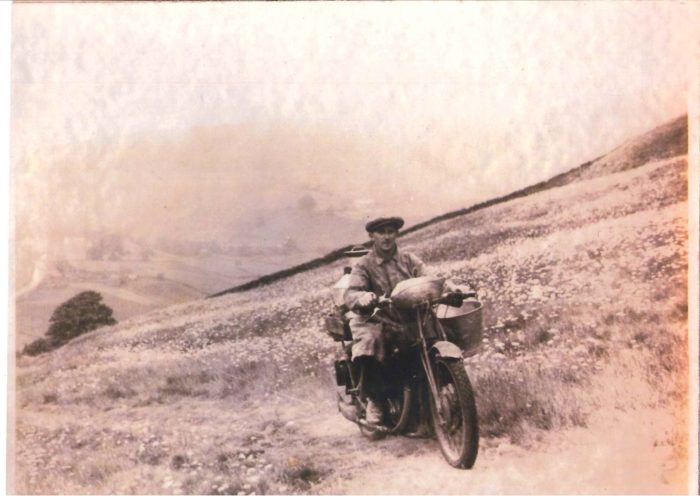 Bobby Hutchinson off to milk cows on Kisdon. Courtesy of Billy Hutchinson

Our research has raised the question if it was really necessary to maintain the quantity and quality of the milk or the health of the cows by leaving them in their fields and walking out to milk them there or was this actually a habit formed by centuries of tradition. It’s clearly no longer considered an issue, although admittedly, cows aren’t walked any great distance to be milked today. It’s only beef cattle that you’ll find grazing the higher pastures nowadays.
We saw in our  blog post Shielings and summer pastures that Wensleydale’s earliest cattle farmers probably kept their cows on summer pastures some distance from the ‘home farm.’  Family members stayed up there with them in small settlements or shielings, protecting the herd from wolves and thieves. They milked the cows up there and turned the milk into cheese and/or butter which could be stored and then carried down to the home farm every now and again along with any fresh milk collected that day. We can assume that the ‘home farm’ was too far away down the valley to drive the cows back and forth each day. The question is, when did they stop this summer shieling system?
Our suspicion is that it persisted until such time as firstly, wolves were eliminated and secondly, when border cattle raiding became less of an issue. We’re therefore guessing that we must be looking at a seventeenth century date as the point when it became safe to leave cows unattended on summer grazing pastures. Wolves were pretty much extinct in England by the early sixteenth century, and early in the seventeenth century, James I ruthlessly pursued the border reivers, executing the main offenders and exiling their families.
Looking at seventeenth century date stones on houses in the dale, the home farmsteads also seem to have spread further and higher up the valley by that time – swallowing what may have once been just summer grazing settlements – they were therefore close enough for people to walk back and forth to milk their cows in the fields. From early records it also seems to be the point when cows start being overwintered in field barns away from the main farm (see our blog post Cattle in seventeenth century Wensleydale)
So, people had developed the habit of carrying milk and milk products from the cow in the field, back to the farm, centuries before the changeover of farming styles,  and it seems that even when the cows were perhaps near enough to be walked down to the farm instead, that people chose not to.
There may of course be other reasons that people chose to continue carrying the milk from the cow to the farm rather than letting the cow do it for them. If people were farming small scattered parcels of land then walking a herd of cows home through other people’s fields might have been complicated. On the other hand, if cows were being grazed in mixed herds on common village pastures then separating your own cows out from the rest and walking them home, while everyone else was trying to do the same thing would probably have been a logistical nightmare.
So, the back can was an essential piece of equipment for the Wensleydale farmer and the only traffic jam in those days would have been a gang of farmer’s sons heading off to milk their dad’s cows in the early morning and evening. 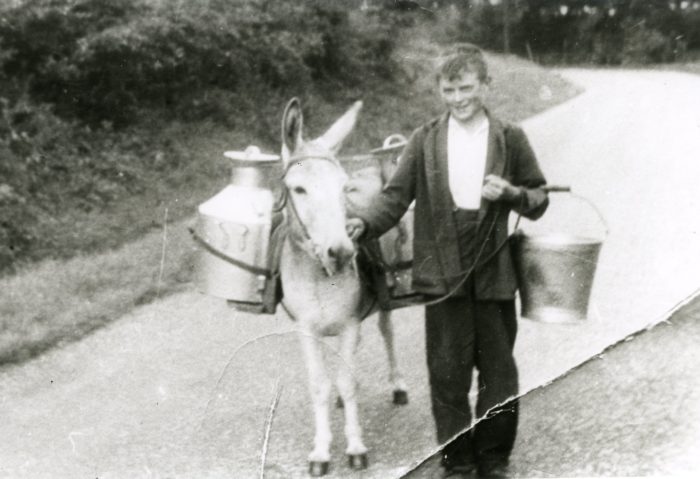