The Oldest Meeting House in the North

The Friends Meeting House at Brigflatts is believed to be one of the oldest in the country, and is still a working meeting house. Brigflatts is an important destination due to its Quaker heritage and as a vernacular building.
George Fox [founder of the Religious Society of Friends, or Quakers] was reputed to have stayed with the leader of the Brigflatts quakers in 1652. [At this time Brigflatts was a hamlet of flax weavers.] A permanent meeting was settled by Fox later that year, and the Meeting House was built 23 years later. [Despite the Conventicle Act of 1670 which forbade non-conformist meetings.] The site was bought for 10 shillings in 1674, and the Meeting House was built on a cooperative basis. Materials were provided by Friends who had them, and labour provided by everyone else. It is dated 1675 on the porch (a 20th Century replica of an original datestone). 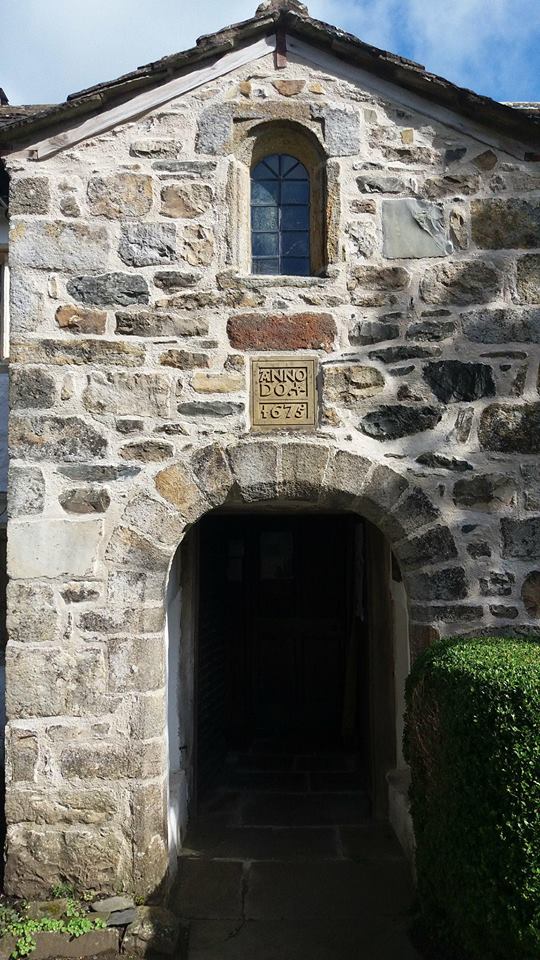 The building is very much in the style of local vernacular farmhouses of that period. It was built without an architect. It is mostly white-washed, with a graduated stone slate roof. Unusually for the time the building was roofed with some 40 tons of local flags, with thatch being the more usual material for buildings of this size at the time. It has been put forward that the builders were making a statement about the permanency of the Meeting House. It has a simple rectangular plan on an east-west axis (at a right-angle to the lane), with a two-storey porch.
Meeting Houses built in a traditional style usually had two meeting rooms: one for the main meeting for worship, and another where the women’s business meeting may be held. In Brigflatts the women’s meeting room could be found upstairs behind the panelled partition. Internally there are many interesting features, including wooden panelling, a raised bench against the south wall, as well as a gallery on the north side and both ends. Brigflatts also has high internal windows in the meeting room, common for those built in a traditional style so that worshippers cannot see outside. 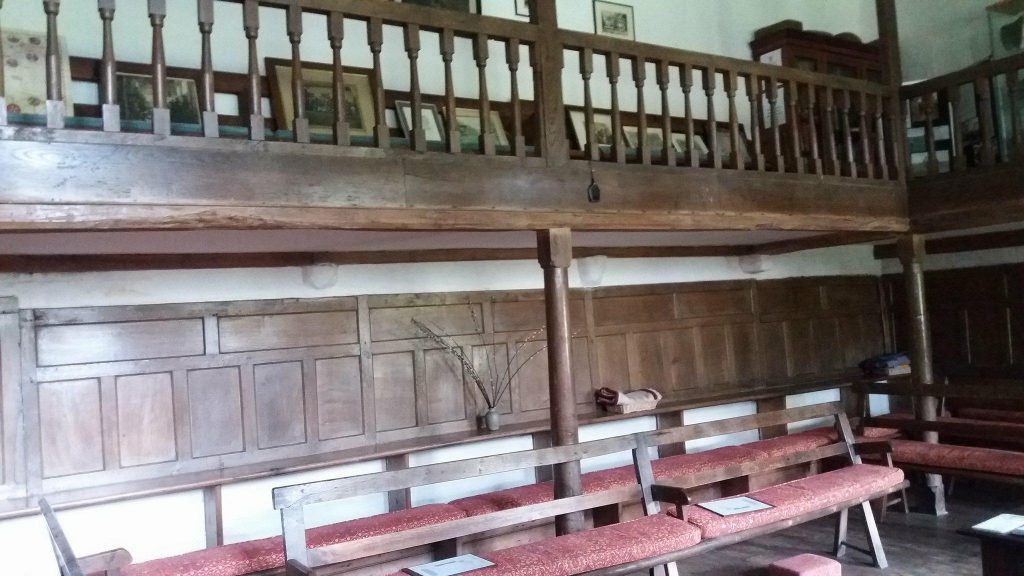 Brigflatts is still a working meeting house, with meetings every Sunday at 10:30am

Over the years it has been slightly altered and extended. Originally the Meeting House had an earth floor, but in the late 17th Century a wooden floor was added, that was later replaced. In the 18th Century there were many small alterations: the burial ground was enlarged, the outer court door was hung (a strong oak door, with simple locking bolt), a ceiling and a wider staircase was added, the gallery was enlarged, and larger stables were built with a room above that served as a classroom. At the turn of the 20th Century an integral cottage was added for a caretaker.
Brigflatts has one of the oldest Quaker burial grounds which pre-dates the building of the Meeting House in 1675. The land was bought in 1660 for 10s and is perhaps the first piece of land purchased by the early Religious Society of Friends. You will notice that, as in all Quaker burial grounds, the headstones are all the same with consistent, simple wording – reflecting their belief that everyone is equally important. 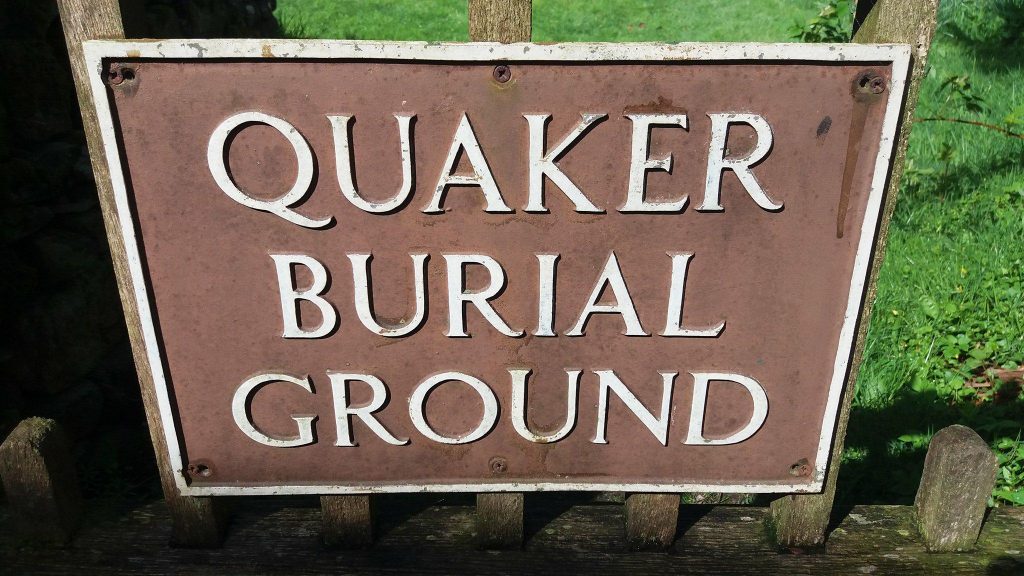 Since the 17th Century about 700 Friends have been buried here. The raising of headstones was only sanctioned in 1850

The historic counties of Lancashire, Westmorland and Cumberland are known as the ‘1652 country’ – where George Fox gathered many of the first Quakers. Numerous places that are associated with 17th Century Quakerism can be found in this area.  For instance, several miles from Brigflatts is a rock known as Fox’s pulpit, where George Fox preached to more than a thousand people on 13th June 1652. A plaque was placed there to commemorate the approximate spot to mark the 300th year of the founding of the Quaker movement. 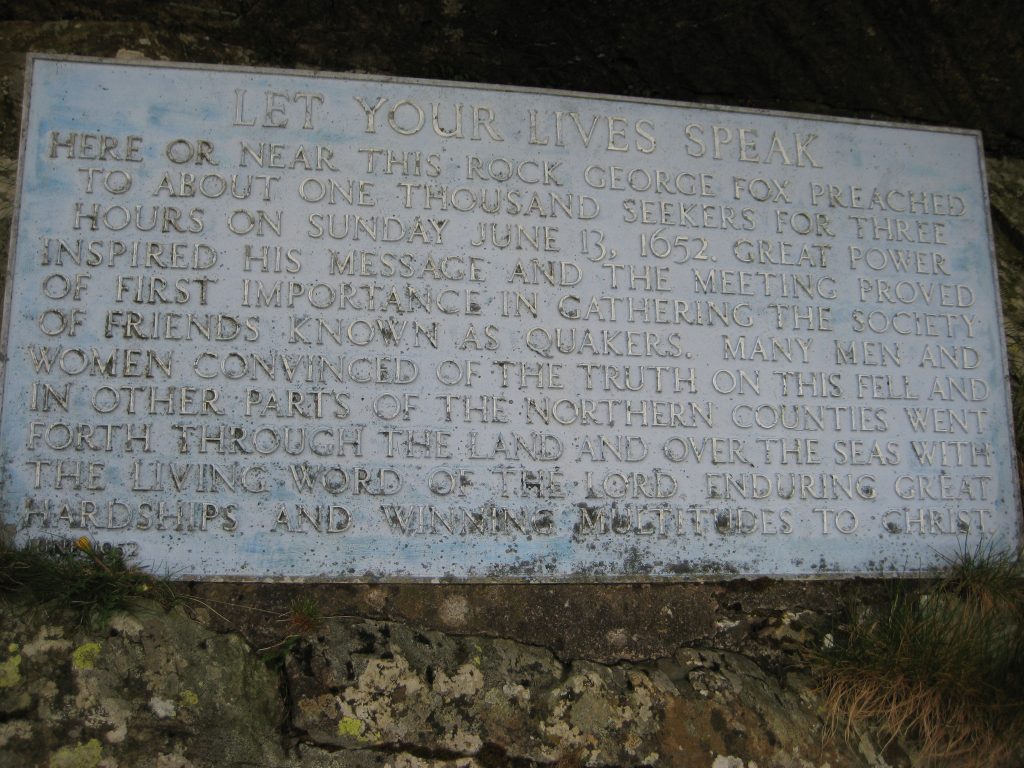 The commemorative plaque at Fox’s pulpit

The Meeting House is a Grade 1 listed building.
Historic Environment Record: MYD3625
Parish: Sedbergh
OS Grid Reference: SD640911
Dale: Lune Valley
Out of Oblivion: www.outofoblivion.org.uk/record.asp?id=238
Access: The Meeting House is open to the public from 10am until 6pm in summer and until dusk in winter. Groups are also welcome after prior contact with the warden. It is 200m from nearby layby parking on the A683 (there is no parking on site).
For more information: www.brigflatts.org/index.html

9 Replies to “The Oldest Meeting House in the North”