The Cathedral of the Dales

July’s Site of the Month is the church in Grinton dedicated to St Andrew (the missionary saint). It is often called “the Cathedral of the Dales”. St Andrew’s has had an important role as one of only four parish churches in Swaledale and Arkengarthdale. The Church is Grade I listed…it is not difficult to see why.

The location of the church at the crossing point of the River Swale was very important for its development. The crossing point in Grinton was the first upstream of Richmond (10 miles away). Swaledale historically had an important industrial heritage. The crossing point was essential to the lead industry – most of the lead mines were on the north side of the valley and the lead had to be transported over the river and over the fells to the River Ure in Wensleydale for shipment.
As a result, the church has had a long history – with possibly a church on the site from the Saxon period.  However, St Andrews can definitely be dated to the Norman period and retains fragments of its Norman beginnings. For instance a round arched window dates to this period. It was originally much longer and would have once let light into the nave, but was blocked with the construction of the tower and shortened to make an arched entrance for town. Most of the rest of the fabric dates to the 15th and 16th centuries. The church belonged to Bridlington Priory at that time. In the days of its medieval glory, Bridlington Priory was one of the great monastic houses of England. It was a key monastery in the North, and one of the largest and richest of the Augustinian order. The foundation charter for the priory was prepared in 1113-14. After the Reformation and the Dissolution of the Monasteries it became a Parish Church.
The church has a chancel and (4 bay) nave with a north and south aisle. The present Chancel was built in the 14th century, though it has been altered in the following centuries. One of the original Norman pillars is on the left of the chancel arch. The original arch would have been narrower and led to the apse that was possibly semi-circular in shape. 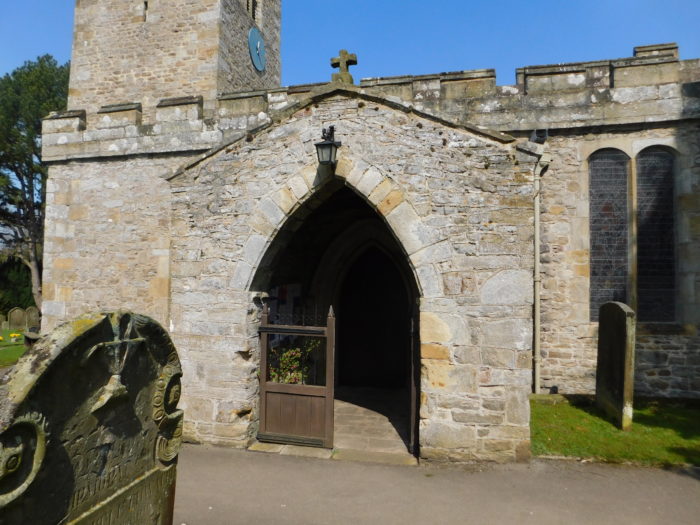 In the North aisle the arches are higher and the pillars are both wider and taller compared to those in the (older) south aisle. The north aisle was added in the 15th century but was rebuilt wider a century later. The former north door is now blocked, however besides it is the broken stoup. [A stoup was a holder for holy water so people entering the church could cross themselves. Many were destroyed at the time of the Reformation.] The former door is now filled with the war memorial window, and plaques commemorating the fallen of the two World Wars are below.
The Chantry chapel, known as the Blackburn Chapel, was built in the 16th century by extending the south aisle. The small piscina still remains (although damaged) – this would have been used to drain the water used for washing the communion vessels to the earth, it was important that the blessed water was never put down a drain. Before this chapel was added there was a Lady Chapel at the eastern end of the south aisle – a damaged piscina is evident there as well. 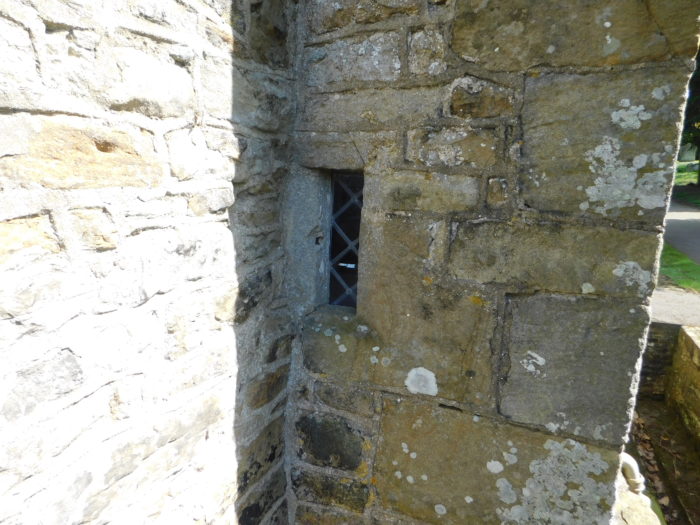 The church has a squint window (or hagioscope) which gives a view from outside the church to the priest blessing the water and wine. In medieval times those with various skin diseases, like lepers, were not allowed into the church. This still enabled them to see the most important part of the service.

There were some interesting additions in the 17th and 18th centuries 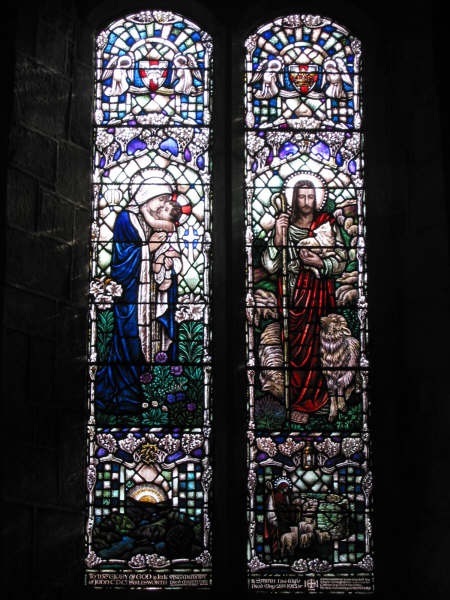 There are many interesting windows located in this church. Many of them are dedicated to parishioners.

The church was restored in 1896 by Searle Hicks of Newcastle-upon-Tyne. [William Searle Hicks was a 19th century architect involved with many churches.] During these Victorian renovations a monument was relocated and the rood screen stairway was discovered. The rood screen would have gone across the Chancel arch and been quite substantial. The stairway would have given access to lamps so statues on the screen could be lit. [After the Reformation rood screens were either removed or altered.]
The Norman font was placed back in the church during the Victorian restorations. In the meantime there had been an unusual 9-sided font dating to the 15th century. The font cover (that dates to the 15th Century) is now fixed into place and can be seen dangling from the ceiling – it would once have been raised and lowered by pulleys.
St Andrew’s was the main church for the whole of Upper Swaledale for many centuries. [A graveyard was consecrated at Muker in 1580.] As a result, bodies were carried in wicker coffins, as much as 16 miles, down the valley to be buried. This footpath from Keld is now known as the Corpse Way. Reportedly there were several long stones located at intervals along the path. These are said to be where the coffin would have been set down while the pallbearers rested. Although Grinton is not on the route of the Swale Trail there is a section of the trail (from Reeth to Keld) that runs along the historic Corpse Way. 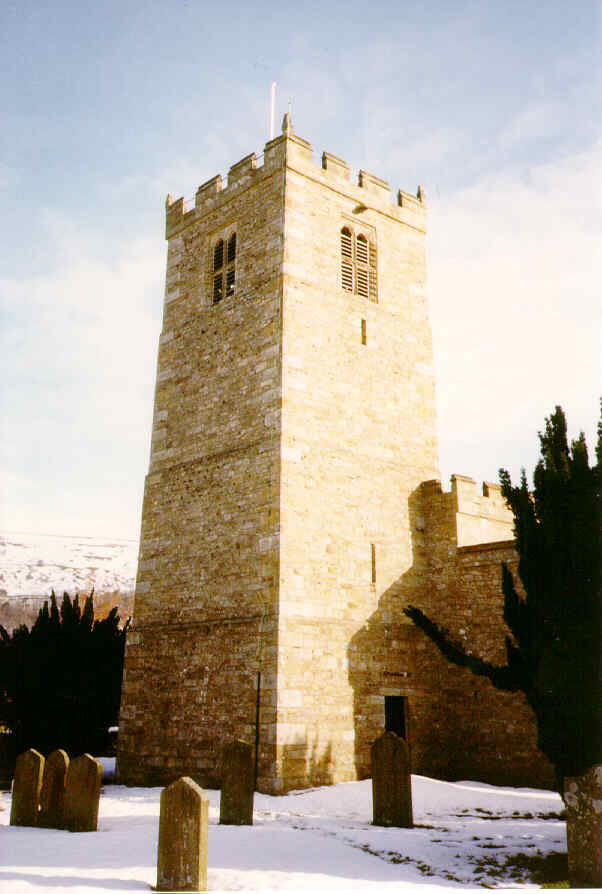 St Andrew’s has a Churchyard Conservation Project. This has involved recording the gravestones, and a mapped survey was undertaken in 1988. Details of churchyard monuments, including photos and inscriptions, can be found here. The graveyard is now full so no more burials can take place.

The congregation have recently had to share the space with bats. This was causing somewhat of a problem, however as they are protected and cannot be moved the congregation thought of an alternative solution. They decided to learn more about them and have chosen to celebrate their uniqueness. This includes limiting the damage of bat droppings and promoting further education (like running ‘bat days’ for families). The Reverend has written a blog post on the subject which can be found here.

Historic Environment Record: MYD4533
Parish: Grinton
OS Grid Reference: SE 046 984 – the church is situated in the centre of Grinton at the junction of roads to Reeth, Richmond and Leyburn
Dale: Swaledale
Out of Oblivion: www.outofoblivion.org.uk/record.asp?id=447
Access: St Andrew’s is open every day, however please be respectful as this is a place of worship (there are services on Wednesday at 10am). St Andrew’s Church has excellent acoustic properties and as a result hosts many concerts – including as a venue for music events during the annual Swaledale Festival. Next year the festival will run from 25 May to 8 June (with the programme out around the end of January).