The next three test pits have been excavated in Bainbridge, with lots of post-medieval finds found. 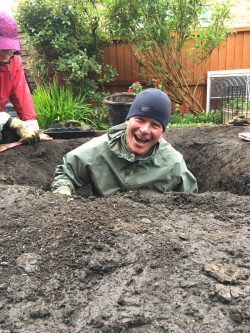 Some exciting Second World War artefacts were found: a button from a Civil Defence uniform and a bullet. Civil Defence incorporated a variety of tasks in the aim to protect the public from military attacks, general emergencies, and natural or man-made disasters.

On the 20th of May the Young Rangers came to Bainbridge to excavate on the green. The session was so popular two test pits were started. The Young Rangers really enjoyed excavating, especially when they could use the hand mattocks, and were really interested in what they were finding. 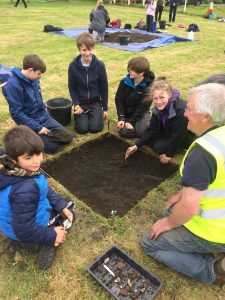 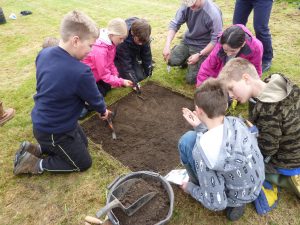 Local volunteers took over in the afternoon, and due to time constraints test pit 5 had to be closed after 20cm, but test pit 6 continued down to 40cm (when natural was struck). The young rangers and local volunteers found lots more post-medieval finds, which are yet to be washed. 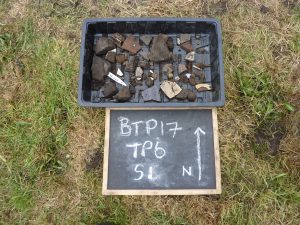 Test pit 5 will not be re-opened at a later date as test pit 6 showed that the natural layer was close to the surface.

We are always looking for volunteers. If you would like to get involved with ‘We Dig Community!’ and help out with this exciting archaeological project then get in touch! Contact Rebecca, on rebecca.cadbury-simmons@yorkshiredales.org.uk or 01969 652353.