Alongside our Archaeological Surveying Techniques training days for community volunteers, we have also recently run a Staff Development Day in survey techniques to give national park staff a taste of the work that we are doing as part of the Dairy Days project. We had wonderful sunny weather for it, and the stackstands stood out really well in the bright light. 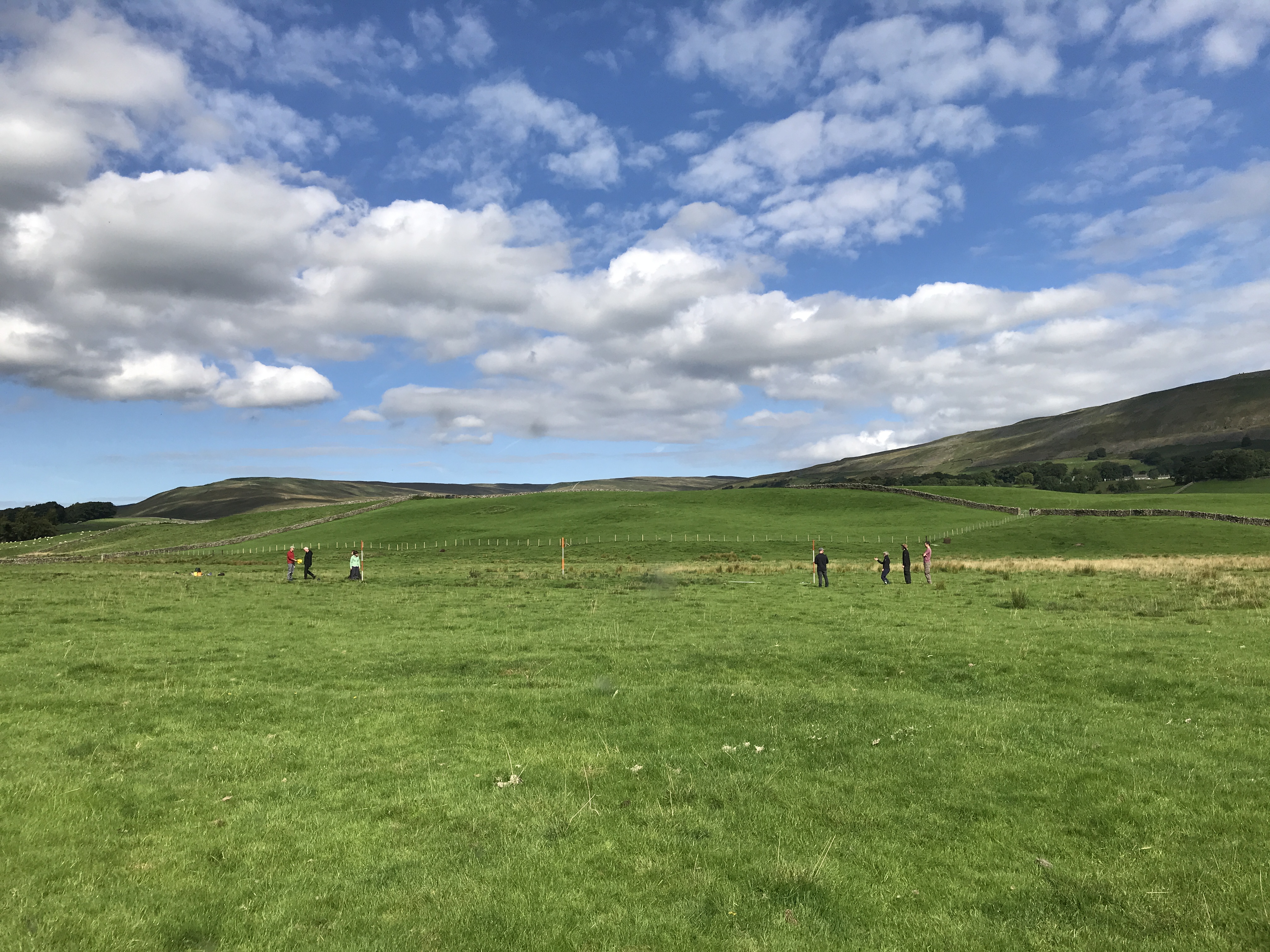 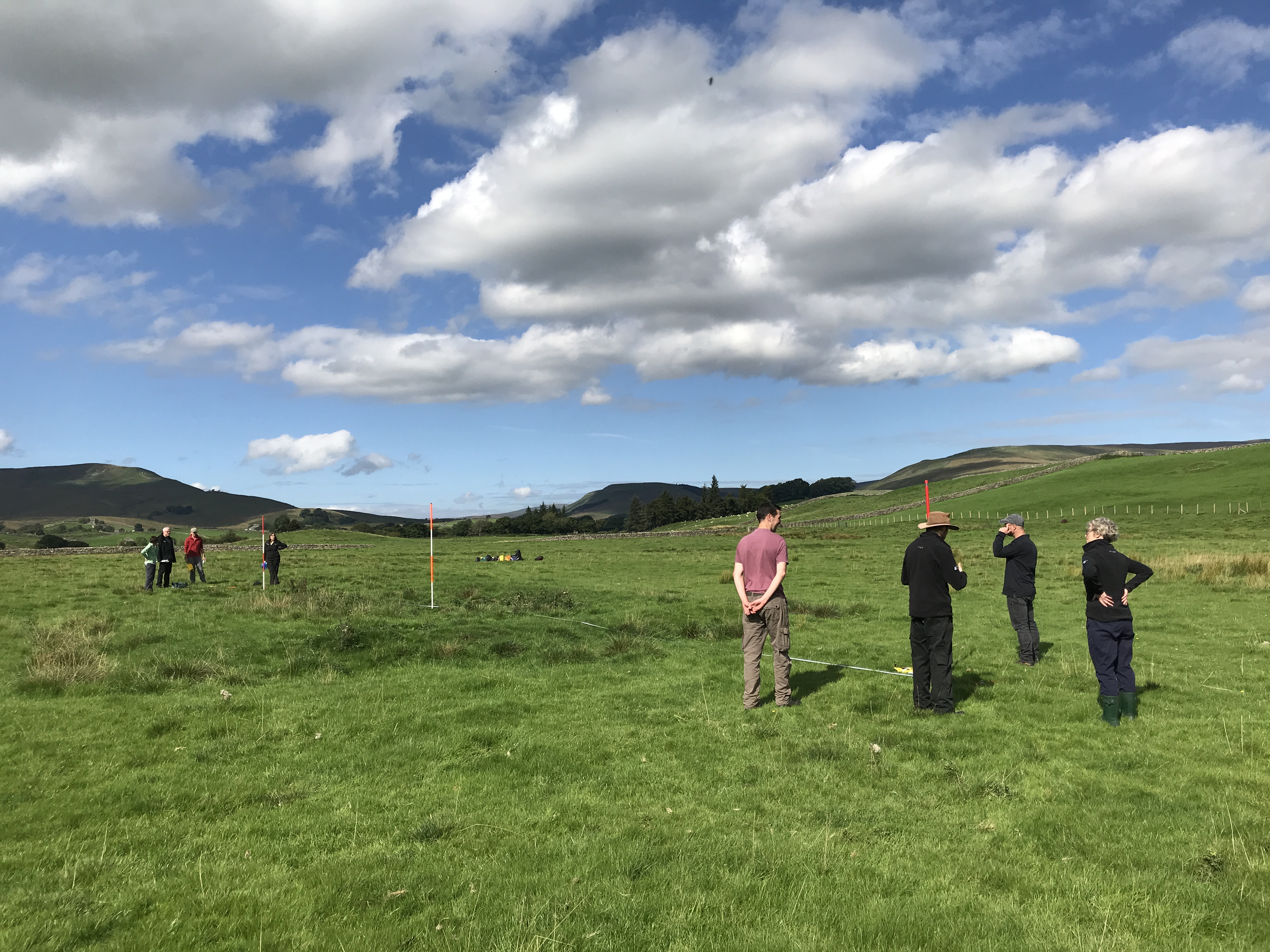 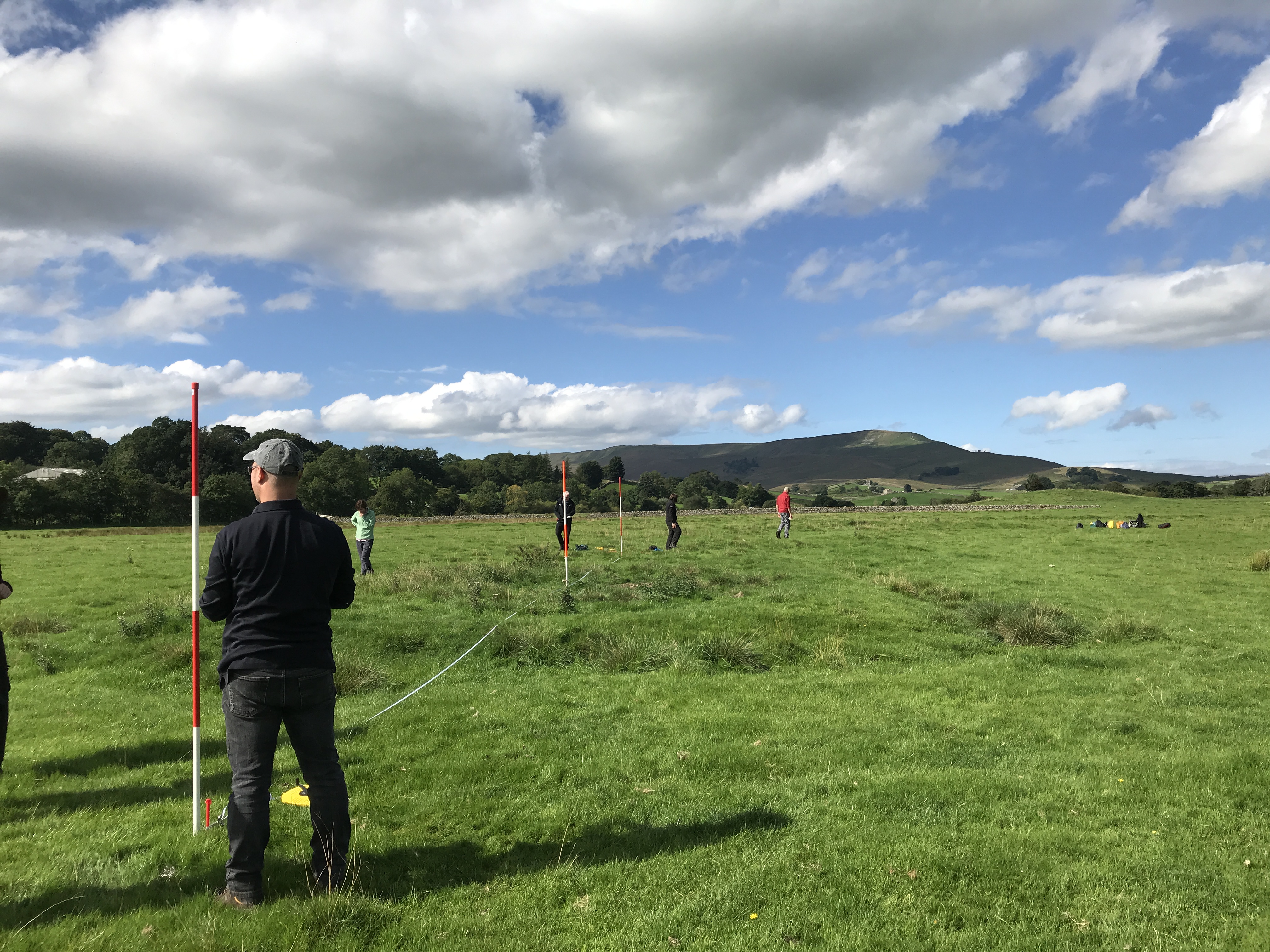 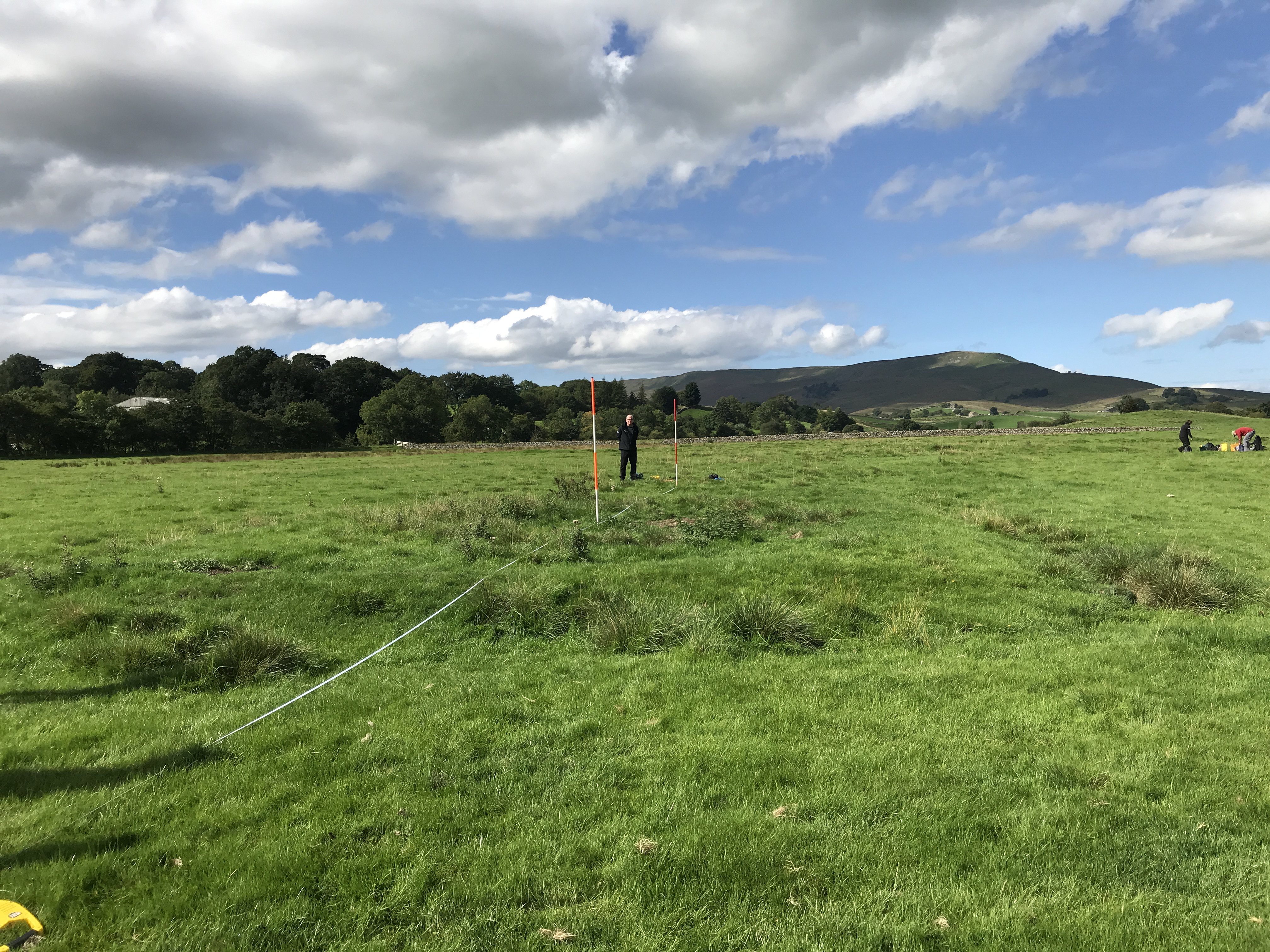 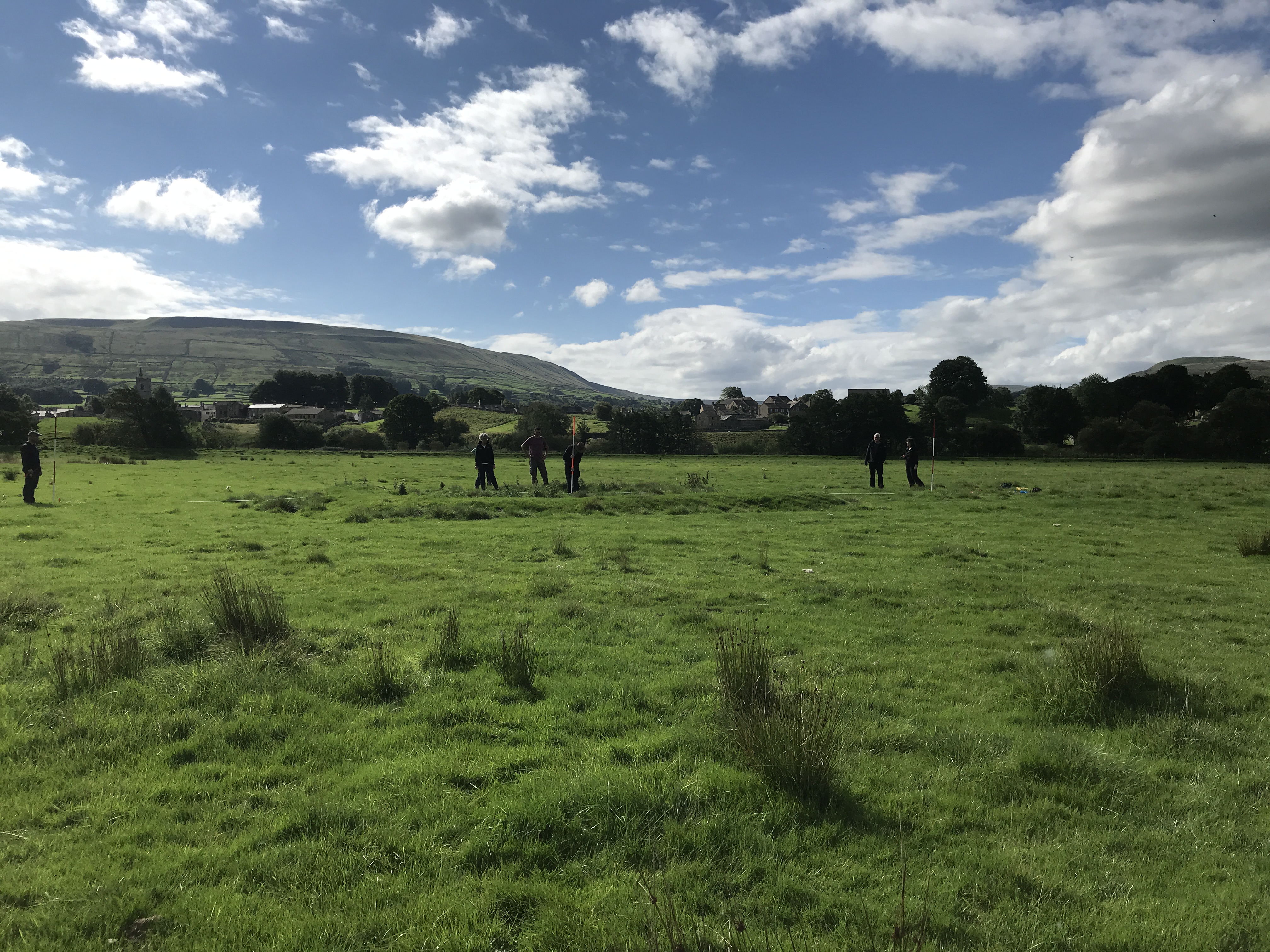 During the day we had some fascinating discussions about how the stackstands would have been used. Archaeology Apprentice Hannah Kingsbury showed us photos of haystacks that she’d seen on a recent study trip to Romania. 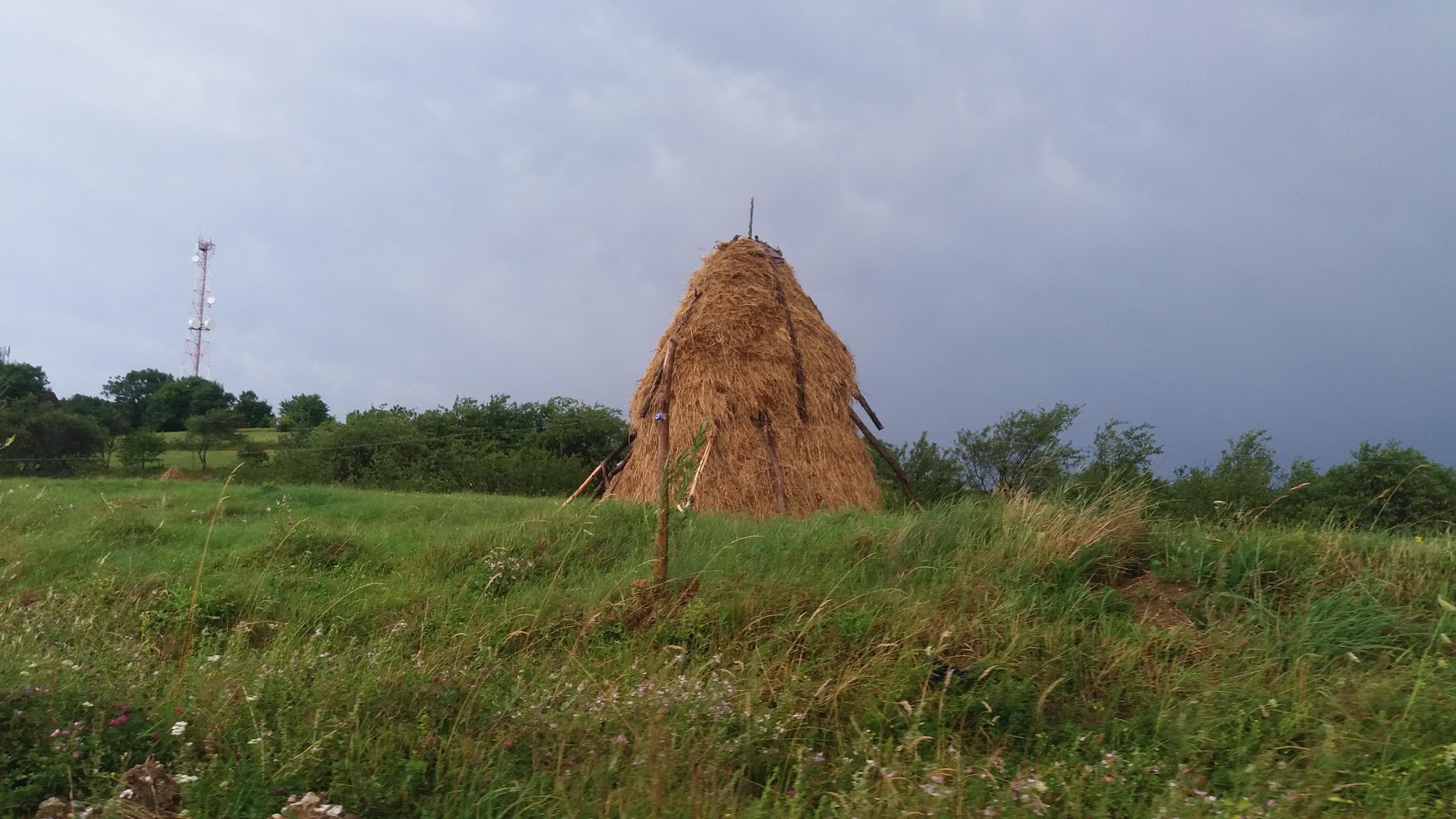 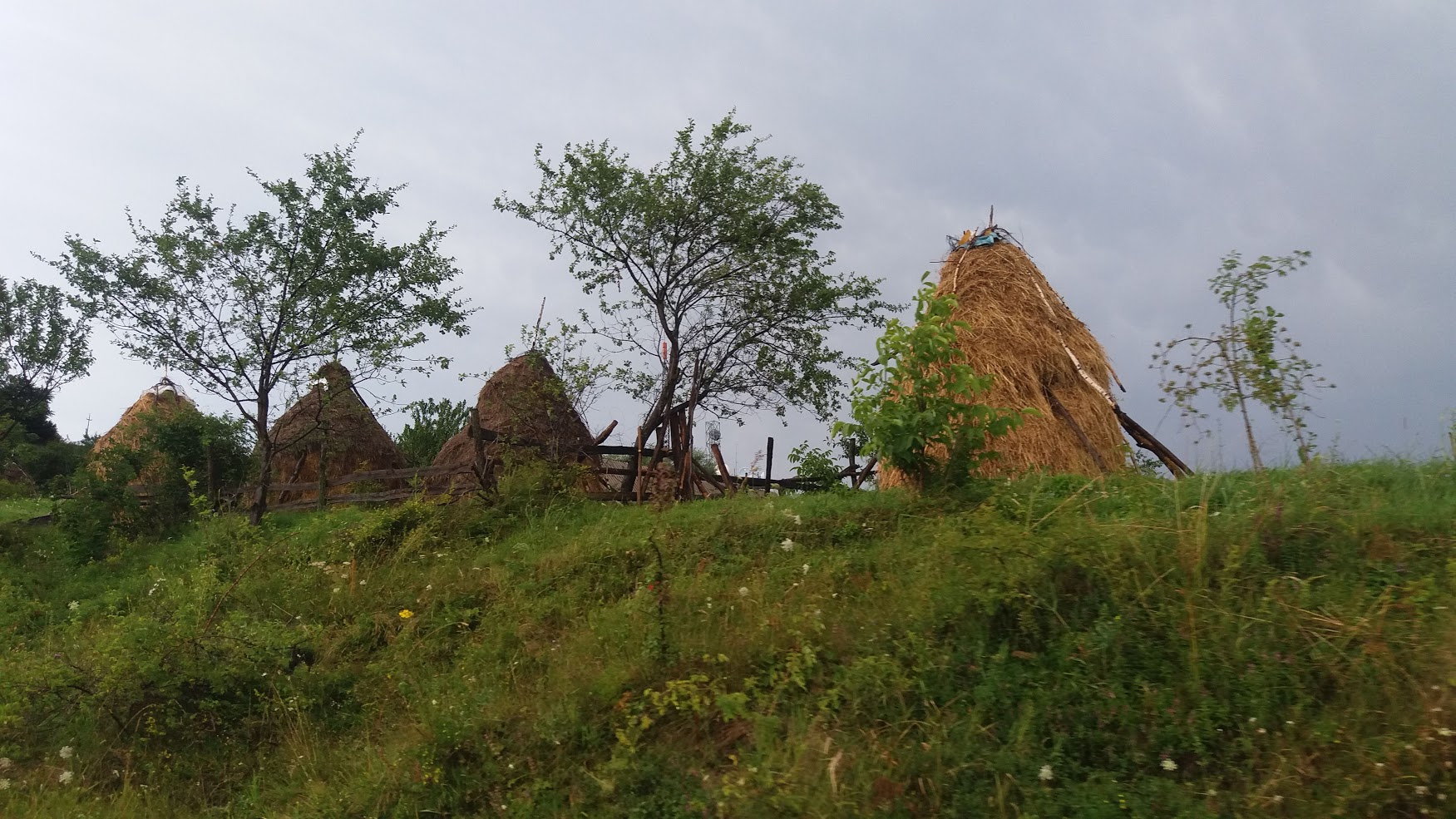 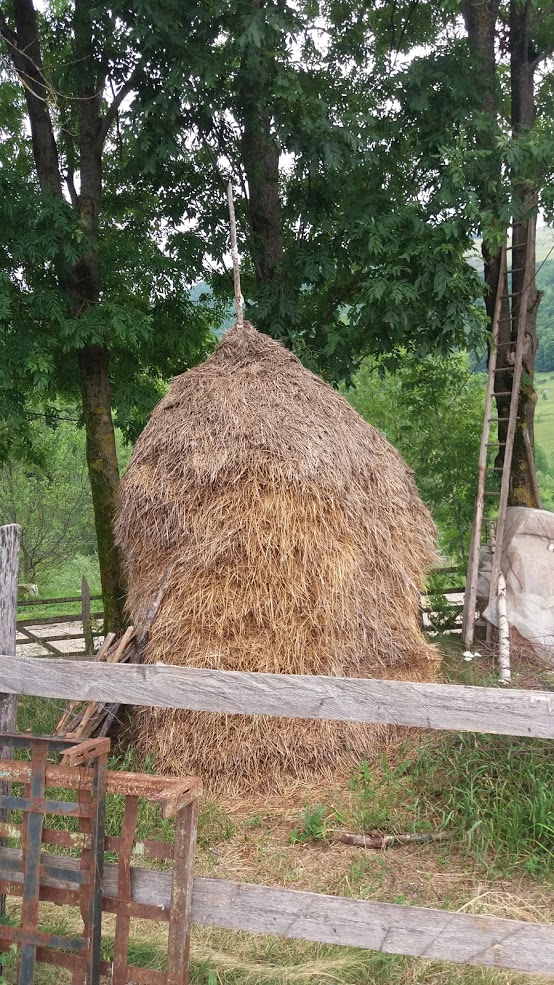 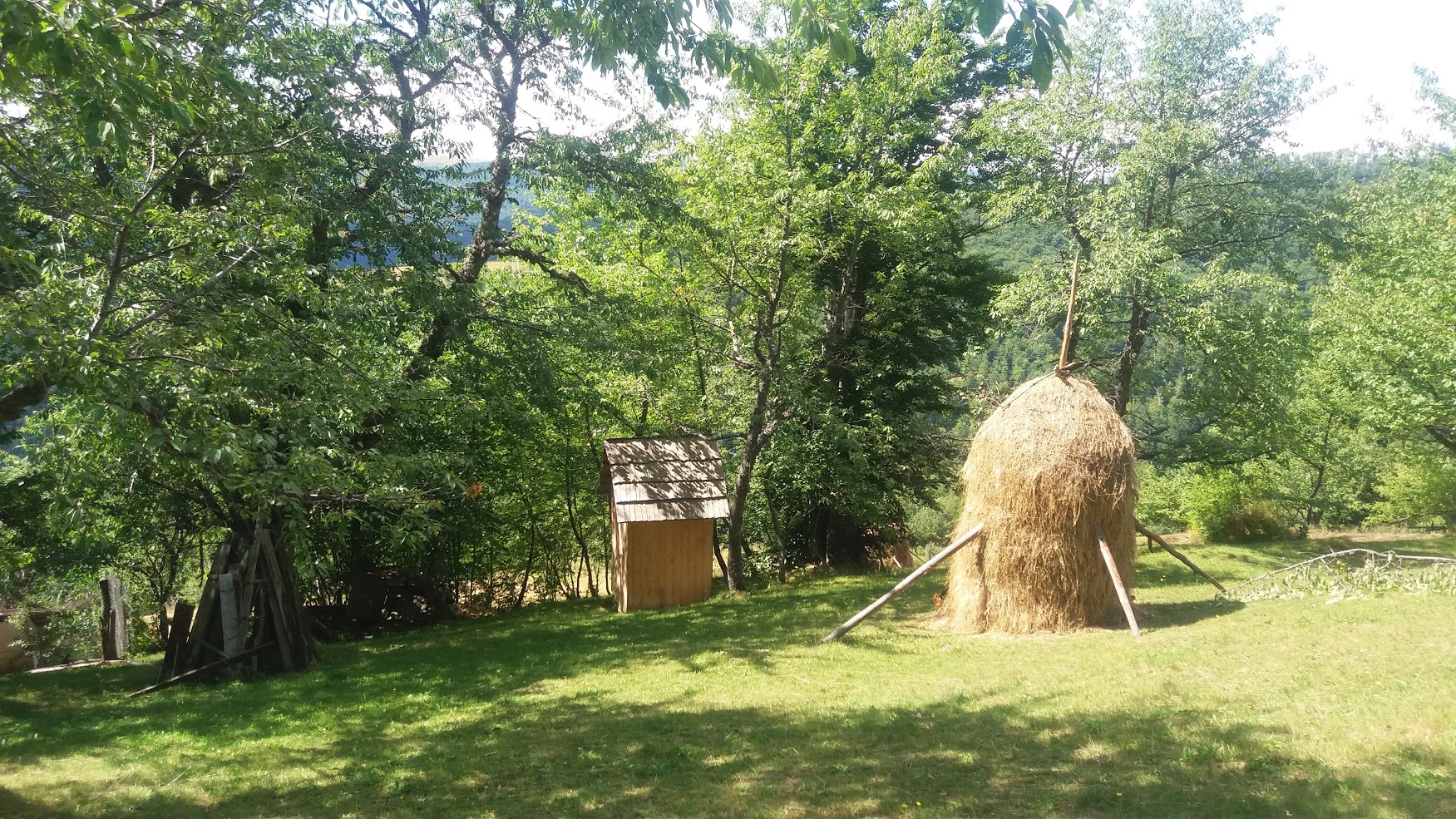 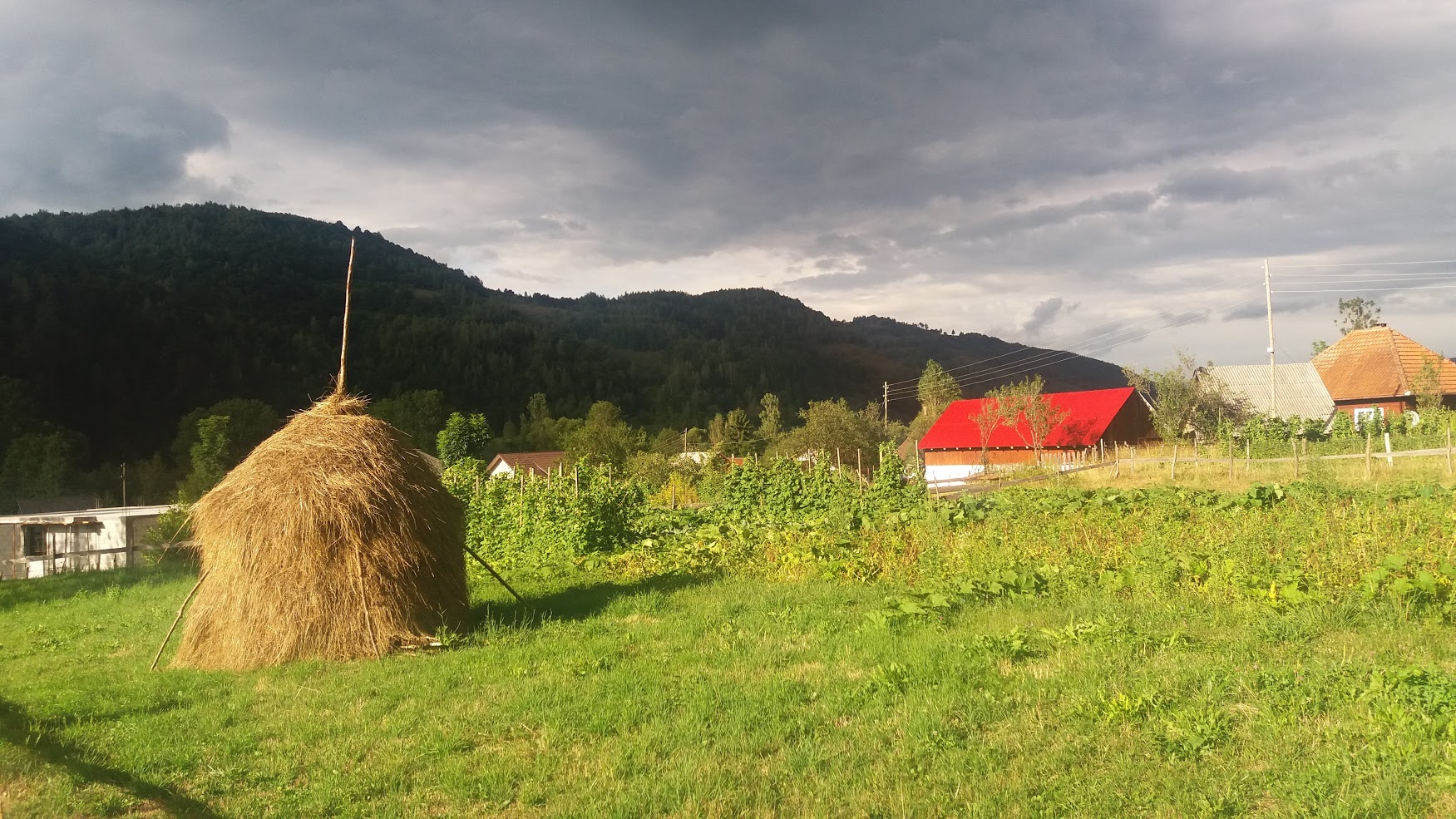 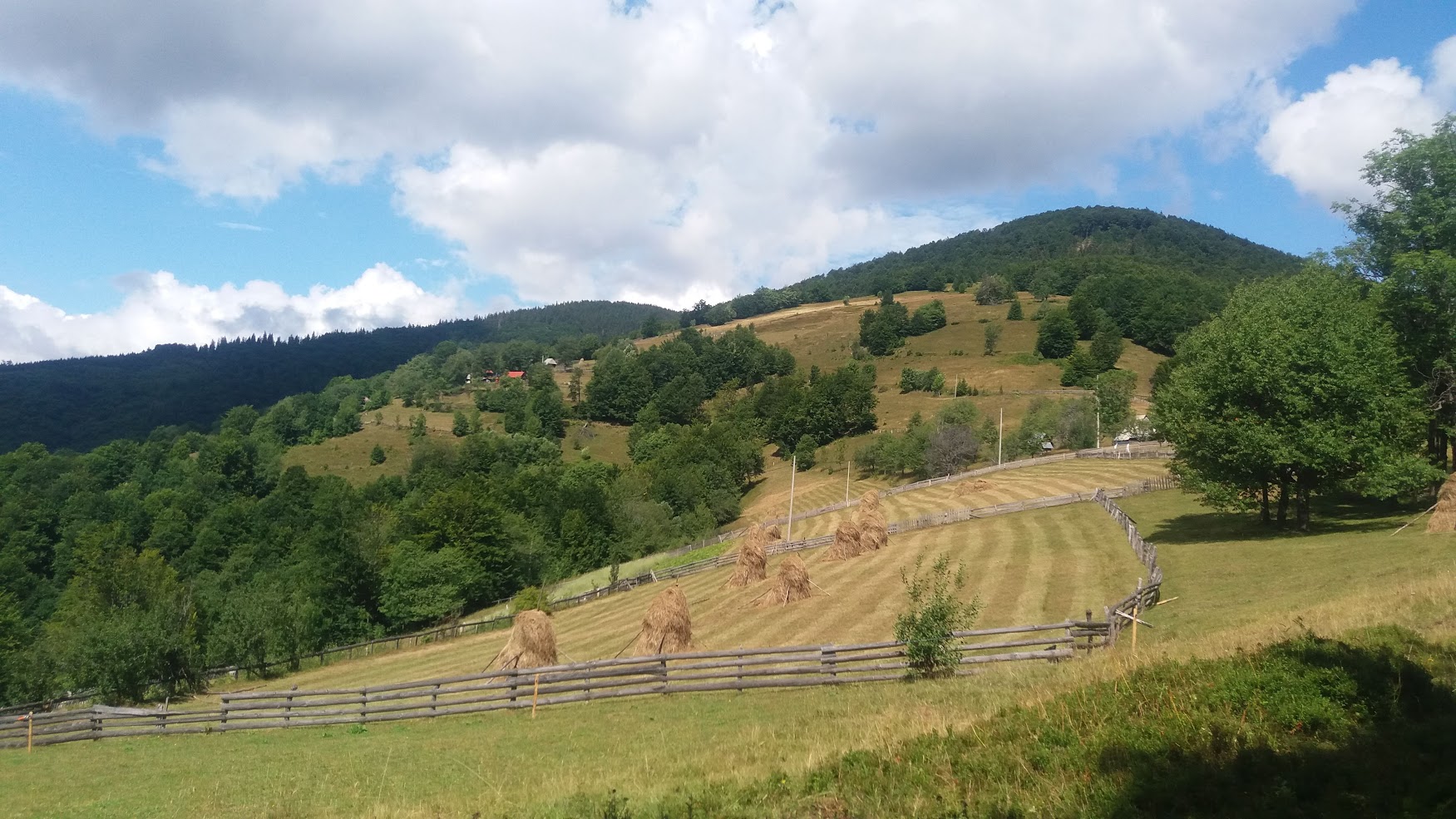 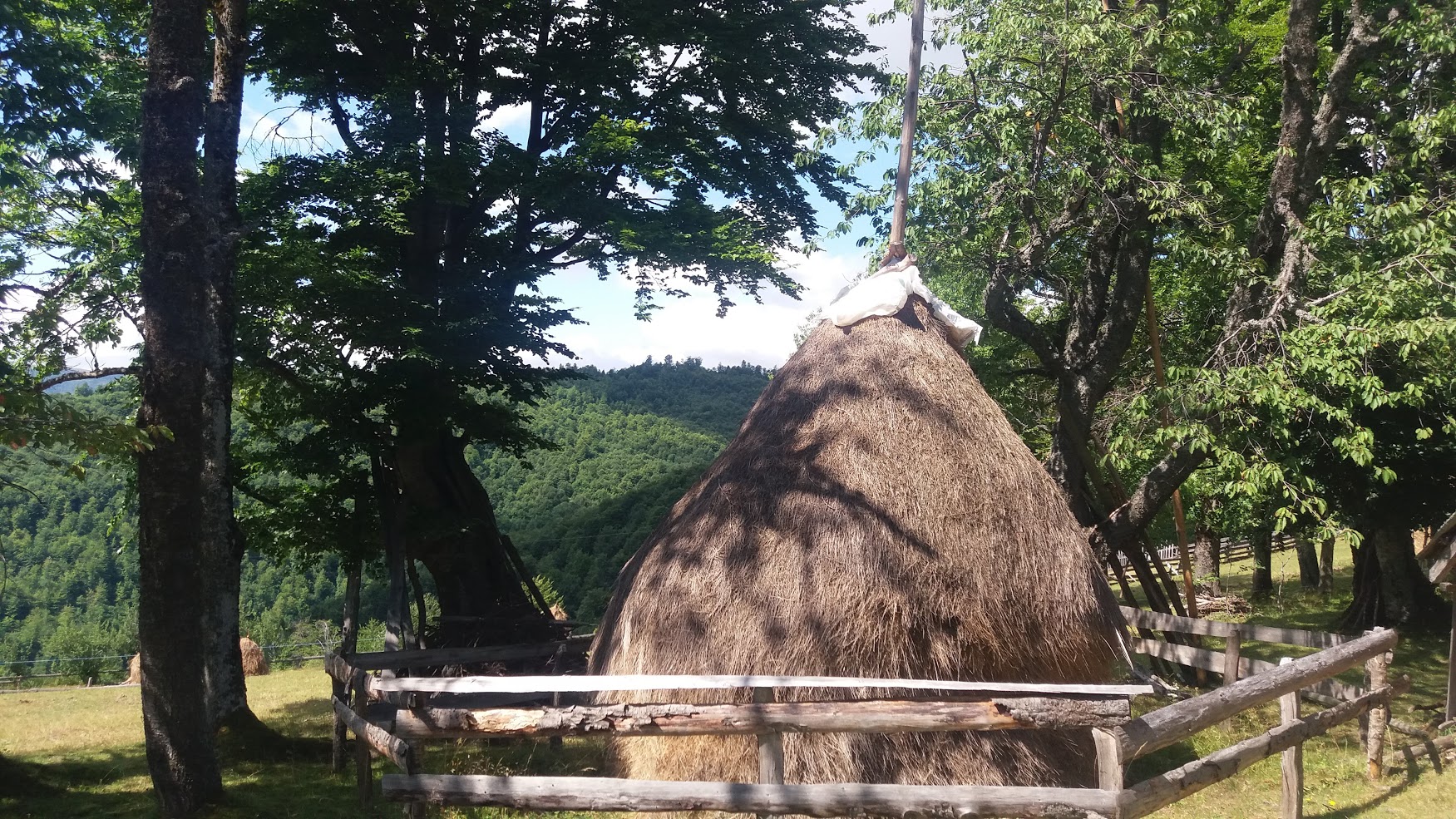 She also contacted a friend in Romania, Monica of Satul Verde, who sent her the following description of haystacks like these:

“The haystacks are usually “built” on a raised platform- this is made of branches- nothing else- so that the hay is a bit raised from the ground and doesn’t rot. The haystack has a tall pole in the middle, and the hay is placed around it in circles until it gets to the desired height. One haystack usually takes 3 cartloads of hay- this is less than 3 tractor loads of hay.

Sometimes the haystack is built on a pyramid structure- 3 small poles at the base- they do not touch the ground- and these poles are attached to another 3 vertical poles that look like a triangle. The haystack is built on these poles, again with the purpose of keeping the hay raised from the ground and with a space in the middle. this pyramid structure doesn’t take as much hay as the one with one pole in the middle. This one is used more as a temporary stack and with the purpose of drying the hay rather than storing it……

They are not usually enclosed, and they can be left in the field a year or two, depending on the farmer’s needs….If the farmer needs it he can take it anytime from the field, including wintertime in a sleigh….

If the haystack is close enough to the stable, the animals can eat straight from it….

The hay that is rotten (it happened this summer because of too much rain) is used as “roof” for hurdles or fences…..sometimes as bedding if it is not too bad”

We have been scratching our heads as to why our Wensleydale farmers built stackstands in a field so close to the riverside, in fields well known for flooding. The stackstand platforms hardly look high enough to keep hay stacked on them dry. We also wondered how the fodder was got to the cows, given that they were probably overwintered in barns up the hill about a mile away in Hardraw.

One of our volunteers sent us a link to the ThatchingInfo website and a page about historic haystack building in the UK with some fascinating illustrations such as this postcard of stacks on Shetland around 1900. 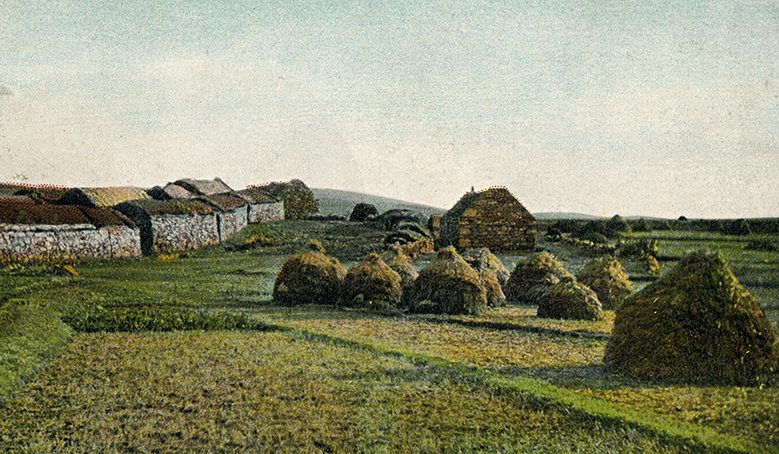 And this early photograph of hayricks in Devon. In both cases, the stacks are relatively close to the settlements where presumably the cattle were housed. 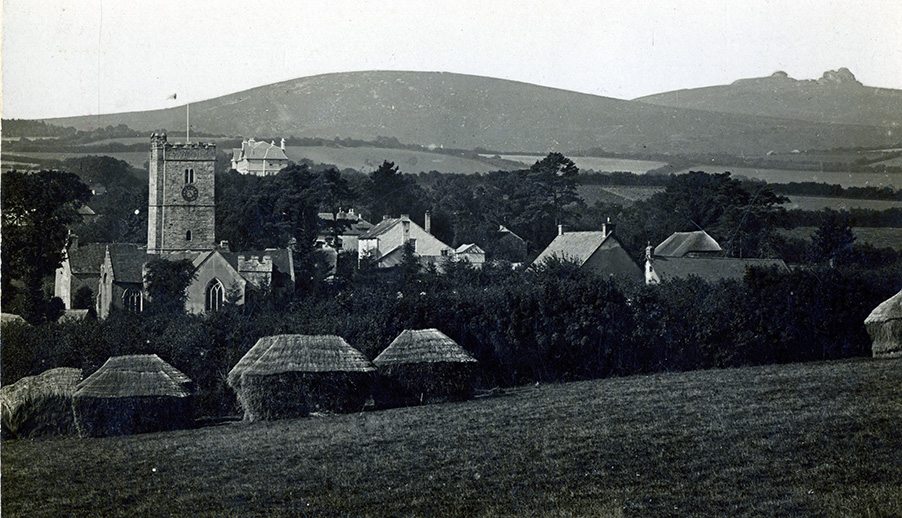 We look forward to finding out more about these interesting earthworks especially the results of the upcoming community excavation which may even give us some dating evidence.