Most of us are familiar with the idea of a haystack, even if it’s just the idea of looking for a needle in one. However, it’s been a long time since outdoor stacks of loose hay have been seen in Wensleydale.  Ensuring a sufficient supply of nutritious sweet hay to feed cows and sheep with over the winter has been a problem from the earliest times for Yorkshire Dales farmers. The winter weather being what it is, stacks had to be protected as much as possible to prevent the hay from going mouldy and rotting.
The stone field barns we are so familiar with had the dual purpose of both housing cattle in winter  and protecting their winter feed supply in the large hay mew. 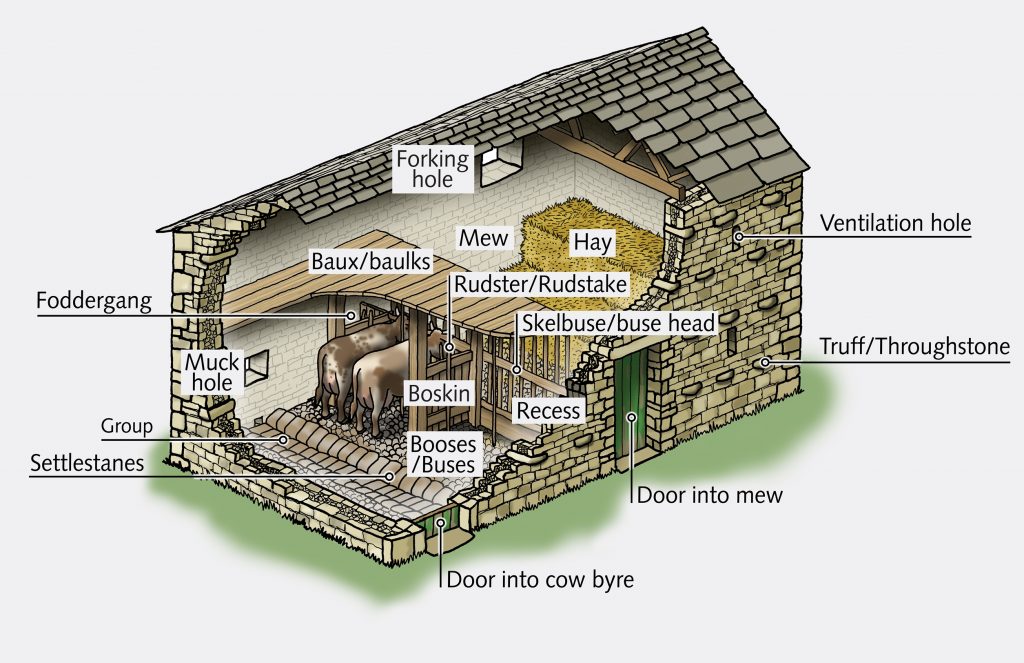 However,  stone field barns are a late addition to the Wensleydale farming landscape, our earliest records of them here date to the seventeenth century. Before that date, farmers had to use other methods to store their hay and this is where the outdoor hay stack comes in.
American writer William Britten illustrates perfectly what they may have looked like in this blog about Haystacks in the Great Smoky Mountain National Park. A conical pile of loose hay is stacked firmly around a central pole and then temporarily fenced to prevent stock from eating it before it is needed. From anecdotal evidence collected during the Every Barn Tells a Story project in Swaledale, we learned that they were also capped with a thick layer of bracken to stop the rain getting in.
Such a structure would hardly leave any archaeological trace of course. In Wensleydale however, it seems that farmers created small ditched and raised platforms to build their haystacks on, called stack stands, and these we can find. Aerial surveys around Countersett have revealed a whole series of small ditched rectangular structures in the fields belonging to Semerdale Hall Farm. These have been identified as stack stands as they seem to follow the same scattered locations inside the meadows as field barns do. Robert White discusses them in his book ‘The Yorkshire Dales: A Landscape Through Time’ which this illustration is taken from. 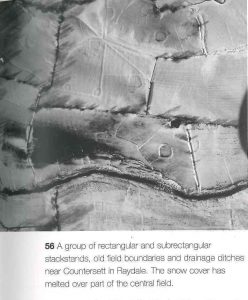 One of them was partially excavated in 2013 by a local archaeology group. They described it as a small sub-rectangular platform 15 x 10 metres in size. It had been terraced into a natural slope but retained a slight slope itself. There was a 2-metre wide ditch on the long upslope side. One of the short sides was against a hedged boundary with a ditch on the other side of the hedge.
No dating evidence was found although nineteenth century finds in the top soil suggested it had gone out of use by then. Elsewhere, stack stands have been recorded built on top of late medieval ridge and furrow so we can suggest a date range of the sixteenth to the nineteenth century for their use in the Dales. 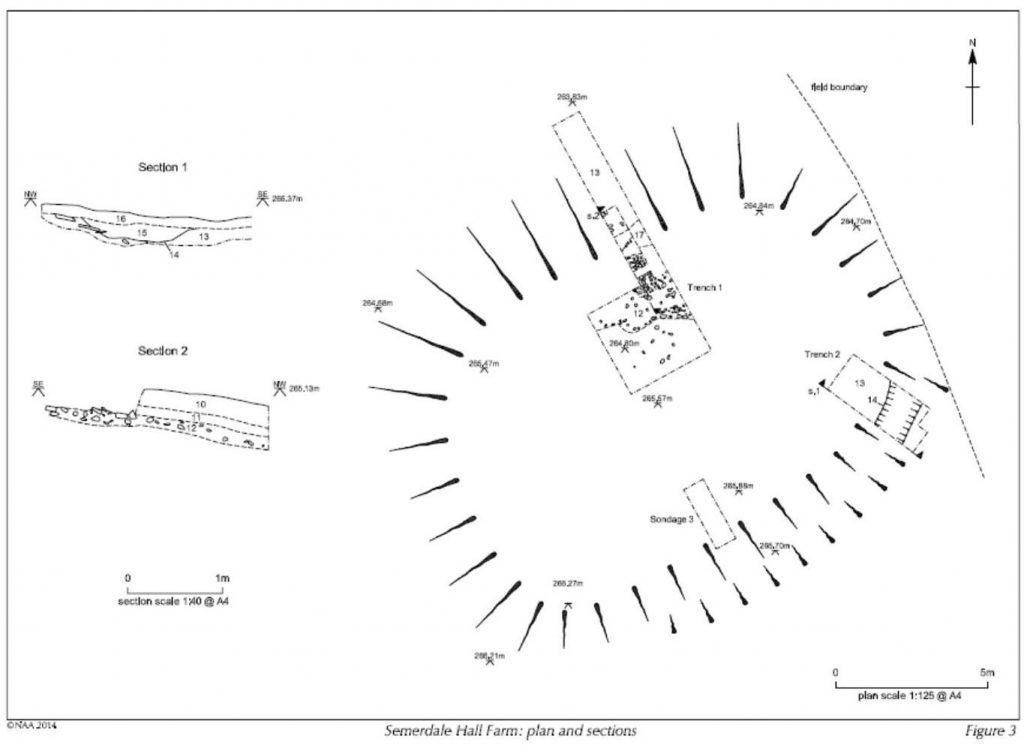 Other stack stands have been investigated at Townhead near Askrigg. We have written about the Townhead stackgarths in more detail on our Out of Oblivion website. They should perhaps more correctly be called stack stands though.
The word stackgarth or stakegarth sometimes appears as a fieldname on old maps of the area. They seem to have the same function as a stack stand but are enclosed by a wall. ‘Garth’ derives from the Old Norse word meaning an enclosed yard and the three stackgarths shown for instance on the 1841 Bainbridge Tithe Map near Stalling Busk are all small walled enclosures. They are highlighted in the photographs below taken from ‘The Township of Bainbridge in the Middle of the Nineteenth Century’ (1979) Transcribed by Fred & Joyce Roberts. NYCRO Publication No 21. 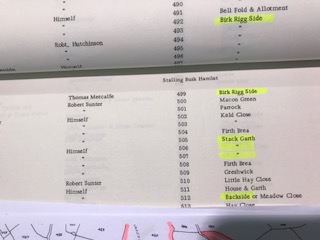 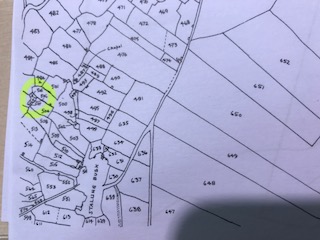 There has been some suggestion that these platforms were in fact the bases for small wooden cruck barns rather than for outdoor hay stacks. If this had been the case, we might have expected to see slots for timber beams or post holes when excavating the Semerdale Hall site, but we didn’t in the small area opened up.
Clearly we need much more evidence before we are absolutely certain of the function of these little structures and we will be doing more research and possibly excavating one over the coming months as part of the Dairy Days project.