In the years I have worked as a Building Conservation Officer for the Yorkshire Dales National Park Authority, I have had the privilege to be involved with some fascinating and remarkable sites. One such site, which encapsulates centuries of history and tradition in Swaledale like no other, is a farmstead known as Low Whita, near to the village of Low Row in Upper Swaledale.

My awareness of Low Whita began towards the end of 2018 when a colleague approached me for an opinion regarding a planning application for the site to convert and reoccupy a number of buildings into use as dwellings.

At the time, none of the buildings had been listed or recognised as being particularly significant. However, from looking at photographs of the buildings and subsequently visiting and inspecting the site, it became clear that Low Whita is a very rare and special group.

Given the vulnerability of the buildings to harmful alterations, a Building Preservation Notice was served by the Authority to protect them. Following this, they have recently been listed at Grade II* and are now nationally recognised as being of more than special interest. For context, in the space of a few months Low Whita has gone from being an unlisted site of unrecognised significance to being in the top 8.3% of all listed buildings in England, in terms of its importance.

The site has been known for over 350 years as Low Whita, and it is likely to have originated as just one cruck-framed, single-storey farmhouse (or longhouse) – possibly 16th century – of which sections of thick, low stone walling still survive.

The longhouse was a type of farmhouse thought to have been much more widespread in the Medieval and early post-Medieval periods in the north of England, where the family and livestock would have lived under the same roof and shared the same entrance. The livestock would have been stalled at one end of the building and the house contained within the other end.

Documentary evidence shows that, in 1649, the farm (at that time spelled phonetically as ‘Lawe Whytay’) belonged to the Close family, yeoman farmers who would have practiced an ancient form of partible inheritance known as ‘gavelkind’, where land would be inherited equally between sons and other heirs. Gavelkind is thought to have originated as an old Germanic tradition, established by settlers such as the Jutes, following the end of the Roman occupation. In England, gavelkind was largely replaced by the introduction of feudal law following the Norman Conquest, although it survived in Kent and other, smaller areas (including Swaledale) and was only finally abolished in 1925.

The Close family and their descendants continued to live and farm on this land until the end of the 19th century and, as a result, the farmstead has been extended and subdivided between heirs numerous times. The site now contains the remains of three modest houses and a smaller cottage, all of pre-1700 origin, as well as a number of smaller outbuildings associated with historic agricultural, domestic and dairying activities. These houses and at least one of the detached barns were all originally thatched with heather, and were raised to carry stone slate roofs from the early 18th century onwards.

Adjoining one of the historic houses at Low Whita is a later extension, which was converted in the middle of the 19th century to use as a butter factory. This is evidenced by numerous large stone shelves which have survived internally. Census records from 1851 show that William Batty and his sister Elizabeth, both butter factors from Whitby, were living and working at Low Whita at that time. Entries from the Muker Show from as recently as 1925 include a competition of cheeses made at Low Whita.

Dramatic changes to agricultural practice in the early 20th century led to the decline and closure of many small-scale dairies, including Low Whita, and, sadly, at some point in the last century, the site became unoccupied.

Although lower-status farmsteads such as these would have once been common in the Dales, Low Whita is one of very few surviving examples of comparable age and significance which can be interpreted so readily. As a result, it provides a fascinating insight into past living and working conditions for ordinary people in Swaledale.

The buildings at Low Whita have considerable potential, both architecturally and archaeologically, to yield further information about changing vernacular architecture and traditions in post-Medieval Swaledale. Their designation as listed buildings will allow their character and significance to be fully recognised and conserved as part of the planning process.

I very much hope that the buildings at Low Whita can be put back into use in a sensitive manner which conserves and enhances their significance, and that the story of their use can be continued long into the future.

If you want to find out more about the fascinating historic environment of the Dales, visit our Out of Oblivion website, which brings archaeological records and the unique cultural landscape of the area to life. 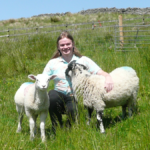