The former Bulls Head Hotel in Hawes, now ‘Dales House’, has undergone a major transformation by having its front windows replaced with their original Georgian sash design, and the feedback by the public has been overwhelmingly positive.

New owner Mrs Nina (Norina) Wilson, who purchased the property in January 2019, has been granted listed building consent for replacing the windows to the front elevation. The three-storey building (plus basement) is in a prominent location facing the busy marketplace in Hawes. The former windows consisted of top-hung uPVC awning frames.

Nina Wilson said to me that she was very keen to see the plastic windows go, as they were unsympathetic to the character and appearance of the historic building. To support her application for listed building consent, she had submitted an old photo taken at the end of the nineteenth century, showing the building with six-by-six Georgian timber sashes to the front, which may well have been the original window frames. It is also notable that on this photo the ‘Bull’ is the only three-story building on the square at the time, and that it is adjoined by two-storey cottages to the right, which no longer exist. By the early 1890s, the hotel would be adjoined with two further three-storey structures, one of them being the (former) bank. This new arrangement is shown on the 25-inch OS map surveyed in 1892/3, with the ‘Bull’ building annotated as ‘Inn’.

The ‘Black Bull Café’ was grade II listed in July 1986 when it already had the modern windows in place, which is noted in its list description. Looking at the style of the front elevation, the building seems to have been built in the early nineteenth century. However, it may not have been a completely new building at the time of its construction. The position of the front door is notably offset to the left and does not align with the rest of the façade, which suggests that there may be remnants of an older building that could have been incorporated into the structure standing today.

Due to the lack of historical records, it is unclear whether the current building was designed as an inn, a pub or a hotel. On the 1854 6-inch Ordnance Survey map, the Crown PH is annotated as the only public house in Hawes. Unfortunately, the Tithe Map of 1840 omits the ownership of the plots in the centre of Hawes, so no further information can be gained from this either. The first census that the Black Bull Inn is mentioned in is that of 1861 when Thomas Dinsdale, aged 26, was the innkeeper. He was also a mason and in later censuses a farmer, and married to Agnes. Dinsdale is last stated to be an innkeeper in 1891, by which time he and his wife had three sons and one daughter. By 1901, Simon Heseltine of Aysgarth was the innkeeper of the Black Bull, and by 1911 George Fawcett (‘licenced victualler’).

The planning history since the 1990s shows proposals concerning the interior, rear and the front porch. In 1994, listed building consent was granted to replace the front uPVC windows with two-by-two sashes, but this was not implemented. The choice of proposed window frame type then seems to have been based on the Victorian sashes found to the rear, but these would have been later additions, and we have no evidence that such frames ever existed at the front.

Nina Wilson’s application to replace the windows with Georgian sashes was approved in October last year, and she has wasted no time in installing them – and what a difference this has made! She told me that she was very happy with the service that Everest provided, the company who supplied and installed the timber windows. The new multi-pane frames have completely changed the character and appearance of the main elevation to the better, and now the building looks again as originally intended. This has not only had a positive impact on the listed building but also on the overall setting of the marketplace, which has been noted in Hawes: people have been complimenting on the improvement of the building, and rightly so. To me, as a Senior Listed Buildings Officer, this clearly shows that the type of windows can make or break a building and that the public can appreciate the benefits of sensitively restoring historic buildings. 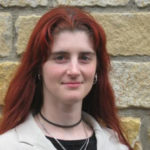