Skip to main content
Blog author Johnny and his Pennine Bridleway team "This was taken by a friendly passer-by after having lunch. We were feeling proud of the progress we had made so far. This is all ten of us, (from left to right) James, me, Thomas, Alec, Anthony, Quentin, my dad, Quentin’s dad, Alec’s dad and James’ dad."

Over Hill and Dale – The Pennine Bridleway

I set off for a 250-mile off-road bike ride in the Yorkshire Dales and Peak District National Parks, with high hopes and heavy panniers.

The trail was the Pennine Bridleway, officially 205 miles long without the detours and extra loops that we cycled. It is one of only two National Trails that can be cycled the entire way and runs across probably the most mountainous, rocky region of England. Our group consisted of me, five of my friends and four dads, including mine.

By the first day it became clear that the going would be tough, even after just 35 miles. The rocky terrain, constant hills, time spent getting lost, equipment and mechanical problems, as well as coordinating a group of ten, made it a challenge to say the least. ‘Dale’ means valley, and we cycled up a lot of hills and descended into a lot of valleys. We were like a ten-man army convoy rolling through the hilly terrain. We only saw one other cyclist bikepacking the trail. All the others on the trail were day-trippers.

We were self-sufficient for the entire trail, carrying all of our own camping and cooking equipment without support. We had eight full suspension bikes and two hardtails. Although hardtails have more carrying capacity, this trail really requires a full suspension bike to deal with the riding surface, so I would recommend using a full suspension bike and packing lightly. I had extra knobby Michelin Wild Enduro tyres, so I had enough traction to make it up the climbs and not get stuck in ruts. My friend’s dad used a Burley trailer instead of panniers which appeared to weigh a ton when fully loaded, but impressively made the trip without any problems.

The difficulty of this trail is not to be underestimated. It is by far the hardest bikepacking trip I have ever completed. Finding food and water was more challenging than we expected, due to the remoteness of the trail and many small village stores having shut down over recent years. We brought LifeStraw water filters, which came in very handy a few times, as we ran out of water on-route and had to fill up from nearby reservoirs and streams.  Power for charging electronics was also hard to come by, so it would have been worth having a front hub generator or solar charger.

We encountered every type of riding surface imaginable, including gravel, large loose rocks, large fixed rocks, grass, marshland, sand and cobblestone. The rough and rocky nature was very tough on our equipment. The wet weather in the initial days claimed the life of one supposedly water-resistant iPhone. The rocks on the trail destroyed the screen of another iPhone, popped six spokes on a rear wheel, knocked out the ratchet mechanism on one rear hub and the bearing on another, and on the very last day broke a rear derailleur hangar into two pieces. Surprisingly, we had only two punctures over the entire trip. I had expected a lot more.

The scenery, descents and adventure on this trip were incredible. We had stunning views of vast expanses of land, glimmering lakes and reservoirs. One of the highlights of the trip was the third to last day when we had our lunch break at Stainforth Force (‘force’ means waterfall) outside the town of Settle with a perfect spot for swimming. The Settle Loop was another highlight, which had breath-taking views and a big climb followed by a fast, smooth descent into our accommodation for the night. We stayed at Malham Tarn Hostel, an old Georgian fishing lodge with a lakeside view, which we had all to ourselves. It came with a delicious full English breakfast, which gave us a good start to the day.

The following morning, we continued this fun descent on the Settle Loop, which was like a rollercoaster ride with long sweeping turns and fast, flowing undulations. By the end of many of the descents, our disc brake rotors were so hot that they would instantly vaporise water when we splashed it onto them. We encountered many waterfalls along the way, which made for interesting breaks. We also toured Ingleborough Cavern, which was alongside the trail. In addition to the normal stalactites and stalagmites, it had an underground river that flowed underneath the hill that we were about to ride over.  At some of the trail gates we had to confront cows that blocked the way and gave us an unbothered look. They simply couldn’t understand why they had to move.

My legs gained a lot of strength over this trip due to the path often going perpendicular to contour lines, straight up seemingly impossible climbs, which most of us still managed to summit without dismounting! We gave ourselves “mountain goat” points if we made it to the top of the climbs without dismounting, which increased our determination to get to the top (usually drenched in sweat). My friend and I were the two top mountain goats and the only two that summited the last brutal climb at the end of the trail without dismounting.

During the trip we came across our fair share of nice and nasty people. The fellow hikers and bikers we came across, as well as the bike shop owners, were all super approachable, friendly and helpful. However, once in Settle we had a car of hooligans speed past us yelling profanities and threw a coffee cup at one of us. A similar thing happened on the South Downs trip; except that time, we got the pleasure of being doused in Fanta. How odd!

We started with ten people and finished with ten people, thanks to everyone’s perseverance, good teamwork and enthusiasm. It was an adventure, and we all had the right attitude to overcome the setbacks along the way, such as getting lost a few times and solving equipment problems. We even had to rent a replacement bike for the last day due to one rider’s freehub breaking. Amazingly, we had no significant injuries other than me falling out of an unusually high top-bunk whilst sleeping in a hiker’s cabin, causing a rather deep gash in my shin when I hit the table on the way down. On the whole, this was a rewarding trip and well worth doing if you are up for an adventure and rock-solid legs by the end of it!

Has Johnny’s story inspired you to try the Pennine Bridleway for yourself?

It doesn’t have to be the full 205 miles – there are tons of sections to explore on short rides, as well as the fabulous 10 mile (16km) Settle Loop. And it doesn’t have to be on a bike either – the Pennine Bridleway was the first UK National Trail specially created for walkers and cyclists and horse riders. 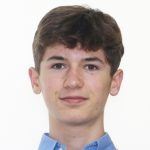 Johnny Dunlop is a sixth form student from Kent. He is an avid cross-country runner, mountain biker and skier, who loves the thrill and camaraderie of the outdoors.

Johnny Dunlop is a sixth form student from Kent. He is an avid cross-country runner, mountain biker and skier, who loves the thrill and camaraderie of the outdoors.