Orphan lambs and the story of a goat called Matilda

Many people with allergies or lactose intolerance prefer goat’s milk to cow’s milk nowadays, but in the past, goat’s milk was prized because it could be safely fed to orphan lambs. In this delightful photo – farmer Redvers Hopper of Yorescott feeds an orphan Dalesbred lamb watched on by his granddaughter Janina and her cousin David. 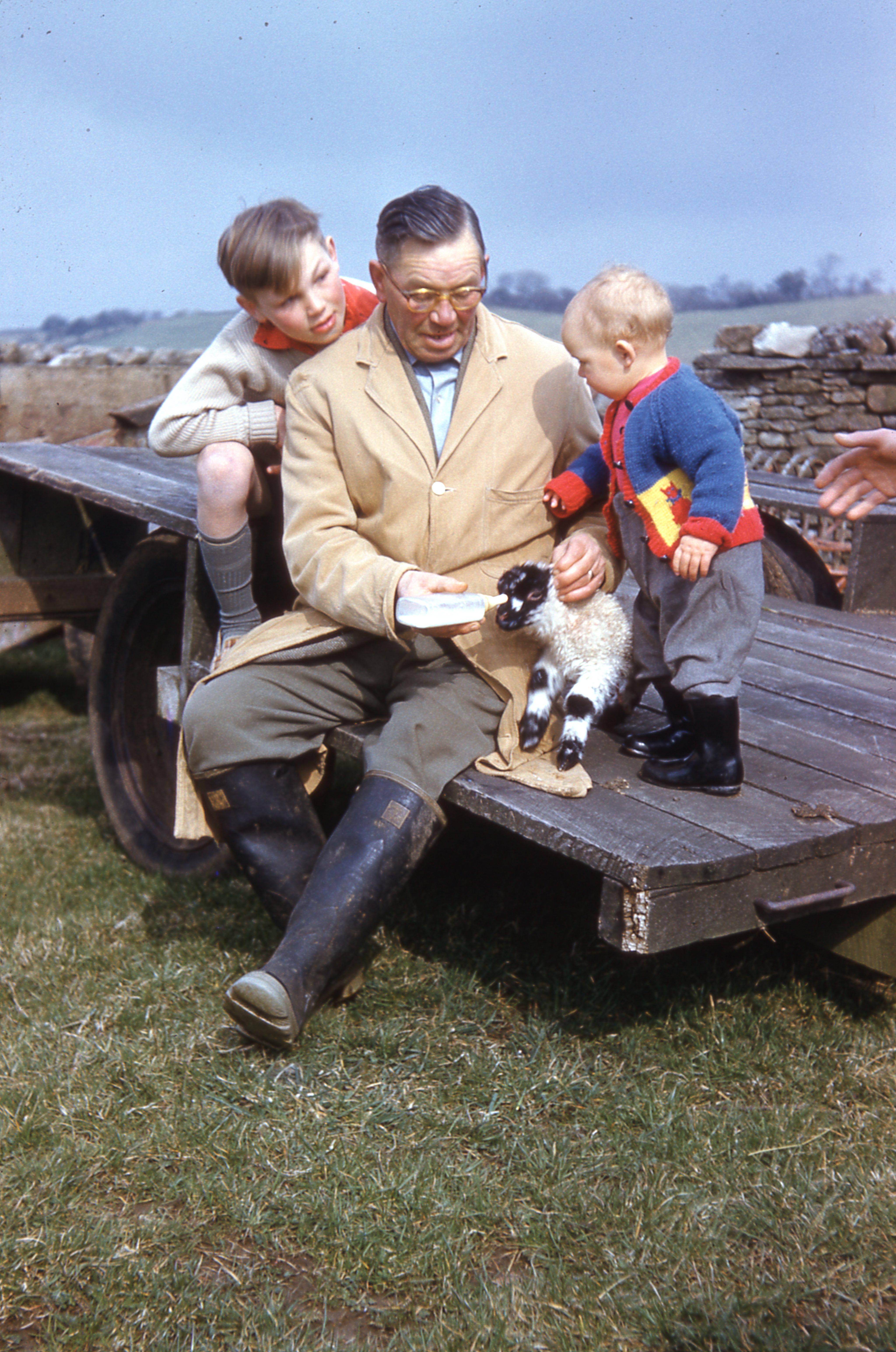 So, every now and again, you might have spotted a goat in amongst the cows being brought home for milking 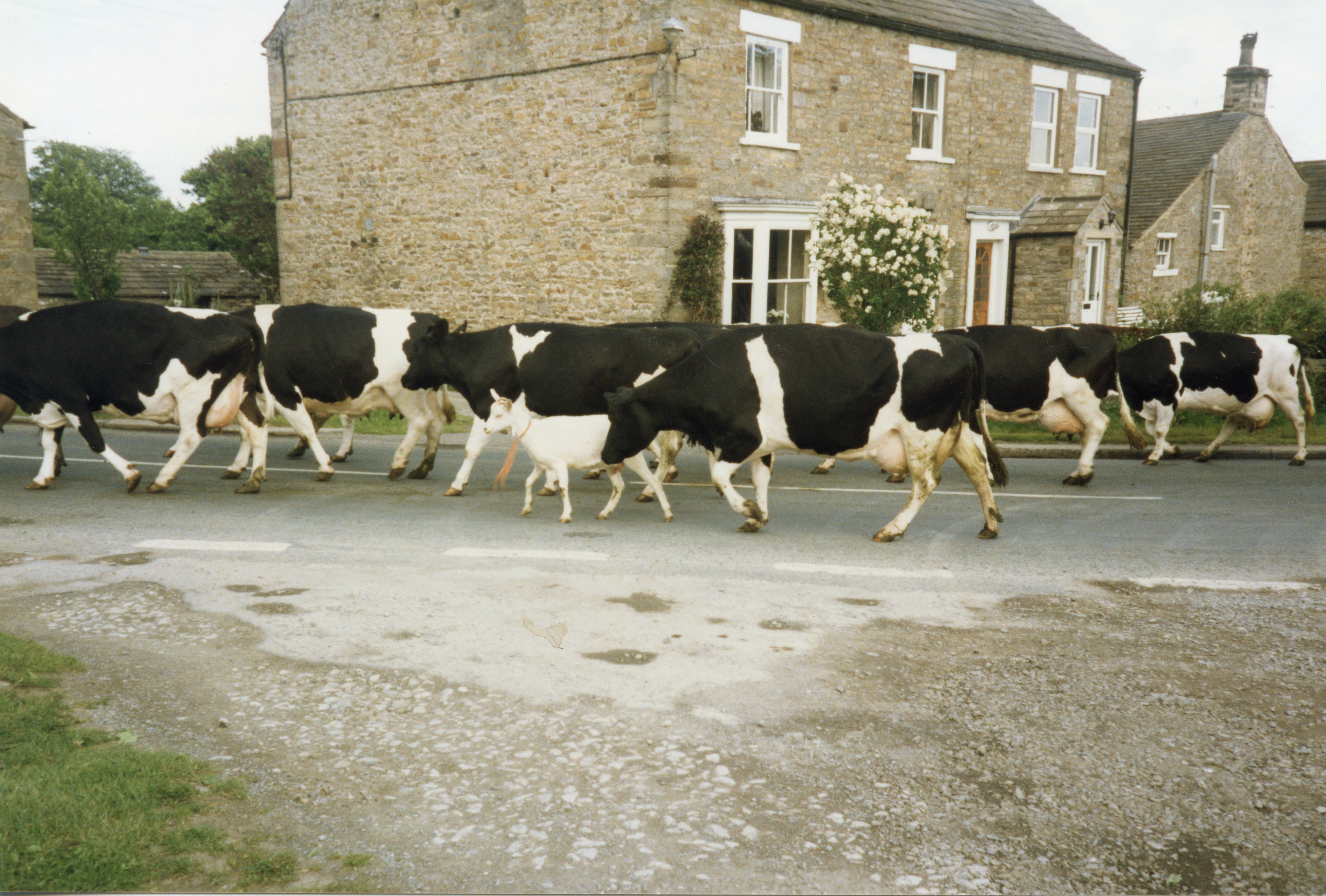 Some owners became very fond of their goats and we have been sent the following account of one such goat, called Matilda.
Matilda
My mum, Ann Holubecki (née Hopper), kept a dairy goat called Matilda on the family farm – Yorescott, near Bainbridge – during the 1940s.
Ann loved working on the farm with her father, Redvers Hopper – and her dream was to become a farmer herself. She was allowed to have her own sheep within the main flock. One year, Ann found herself with several orphan lambs. Nowadays, orphan lambs are usually fed with a specially formulated, powdered milk replacer that is manufactured to be as nutritionally close as possible to ewes’ milk. But this has not always been the case.
Being a dairy farm, they were not short of raw cows’ milk at Yorescott – and this is what the orphan lambs were fed with. However, some of the lambs died and the cows’ milk was blamed. Someone suggested that goat’s milk was closer to ewe’s milk and that Ann ought to get a goat! A Toggenburg-type goat duly arrived and, thereafter, her milk was used for Ann’s orphan lambs, with much better results (goats’ milk is often considered to be the best ‘universal substitute’ for orphaned animals).
The young goat arrived at Yorescott without a name. But, as the capricious creature immediately took to dancing along the tops of the walls – knocking off the topstones as she went – the farm workers started calling her ‘Waltzing Matilda’. The name stuck! 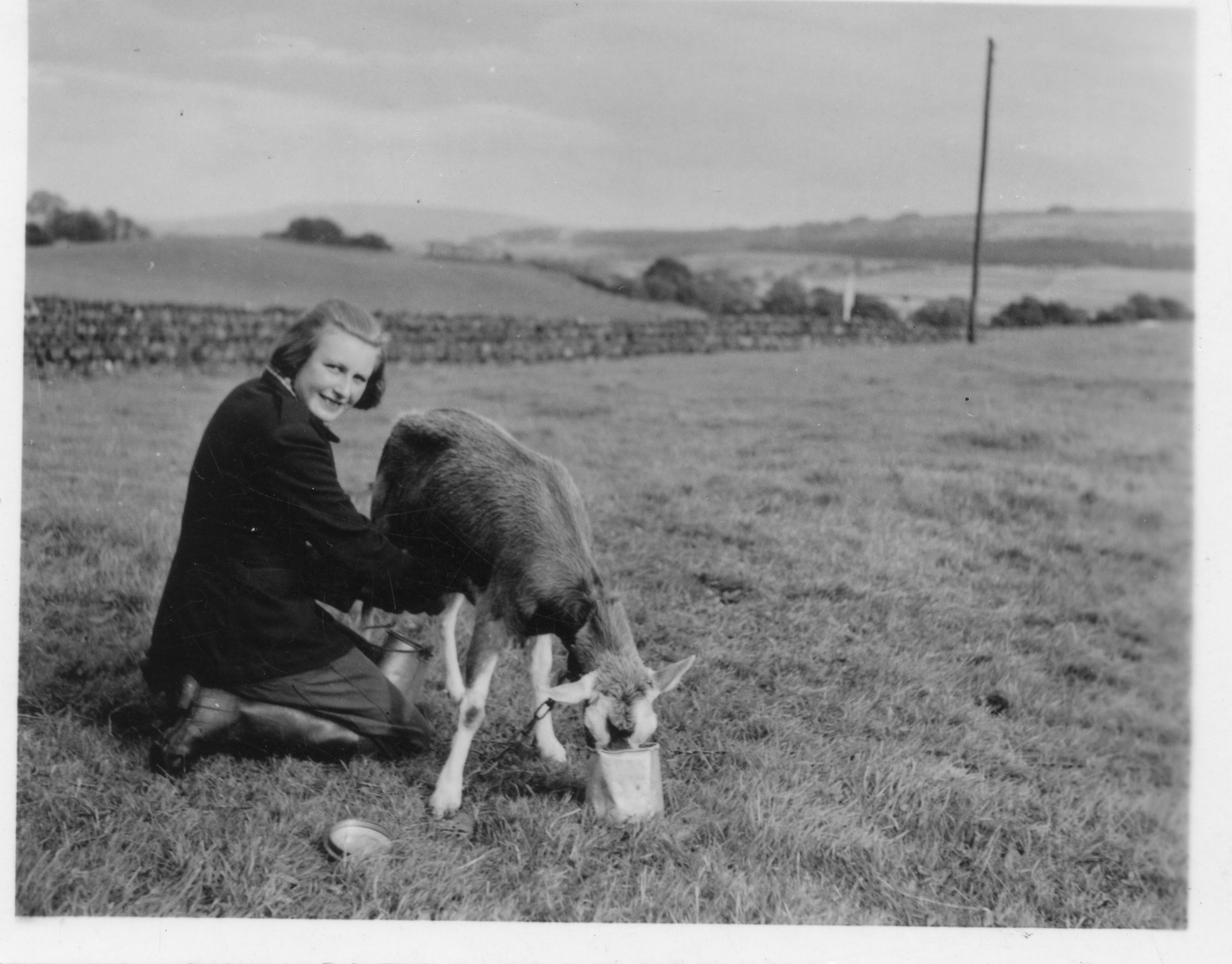 Matilda being milked by Ann at Yorescott, 1940s. Collection of Ann Holubecki

As a child, I loved to hear funny stories about Matilda. I thought she was easily the cleverest and most interesting animal on the farm! Ann grazed Matilda – ‘Matty’ for short – on the side of the railway line that ran through Yorescott land. Goats are actually fussy eaters and love to ‘pick and choose’ their food and the railway embankment would have been particularly rich in wildflowers.
But goats are also adventurous when it comes to ‘food’ and will try anything once! I was always begging to hear the story about Matty eating some important letters – stolen out of Ann’s pocket – that were supposed to have been delivered to her father. Matty also developed a taste for cigarette butts!
When my dad retired in 1985, Mum was able to return to her beloved Wensleydale after an ‘exile’ of 25 years. My parents settled in Redmire – where, in those days, a dairy herd was still kept by a farm in the centre of the village. Mum loved to watch the cows being taken down the main street from their field to be milked and returned to their field the same way.
For several years, the herd had an addition – a white goat, who clearly thought she was a cow! She came in and out for milking with the rest of the herd, sometimes accompanied by her kids. Mum was delighted to see her and took several photos of the goat with her adopted herd. 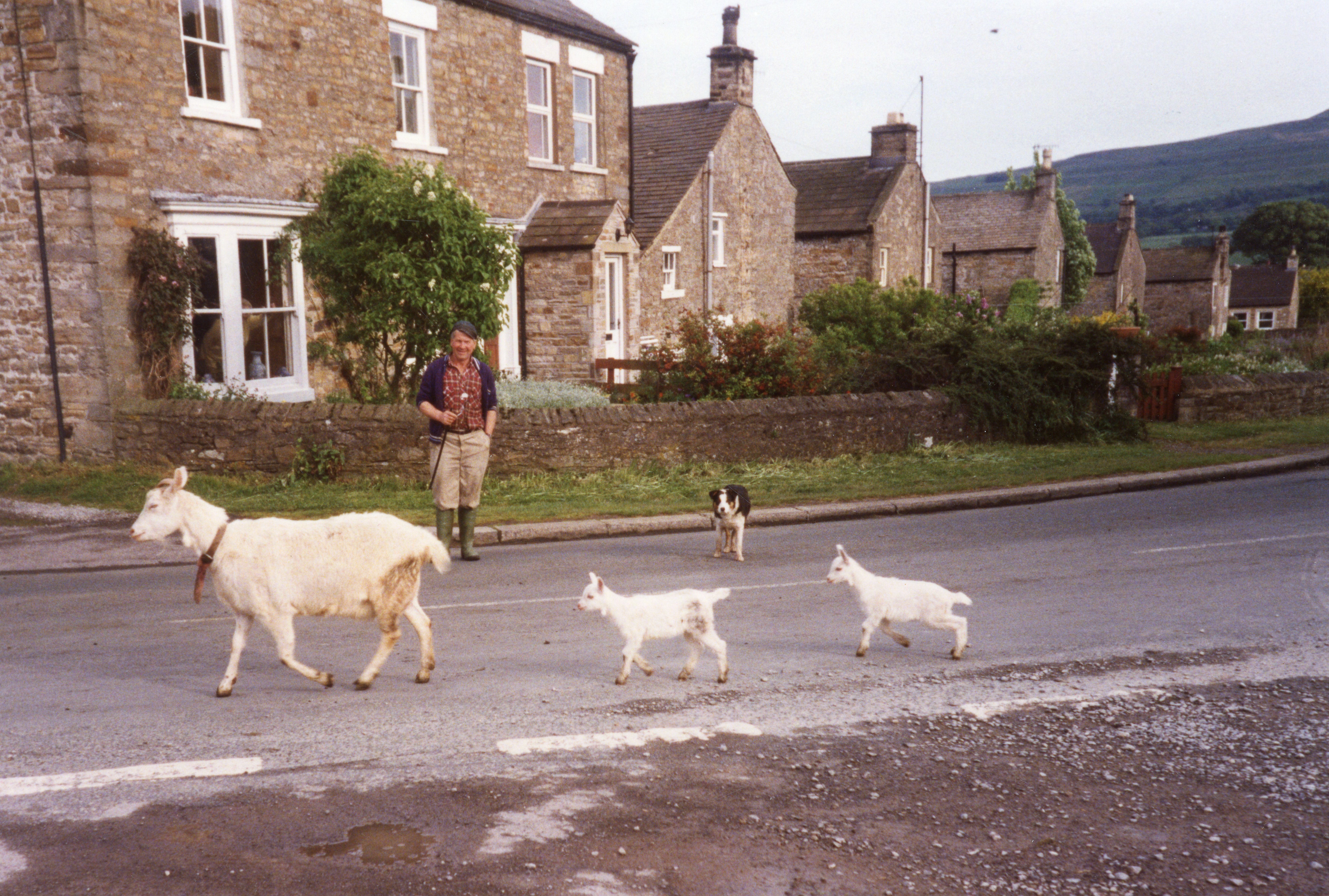 I farmed for about a decade myself, though not in the Dales. It gave me the opportunity to have a longed-for goat of my own! Six goats, actually: three pygmy goats, two rare-breed golden Guernseys and a white, Saanen-type mongrel – who nevertheless had a very aristocratic air about her and was my firm favourite. You can probably guess what I named her. 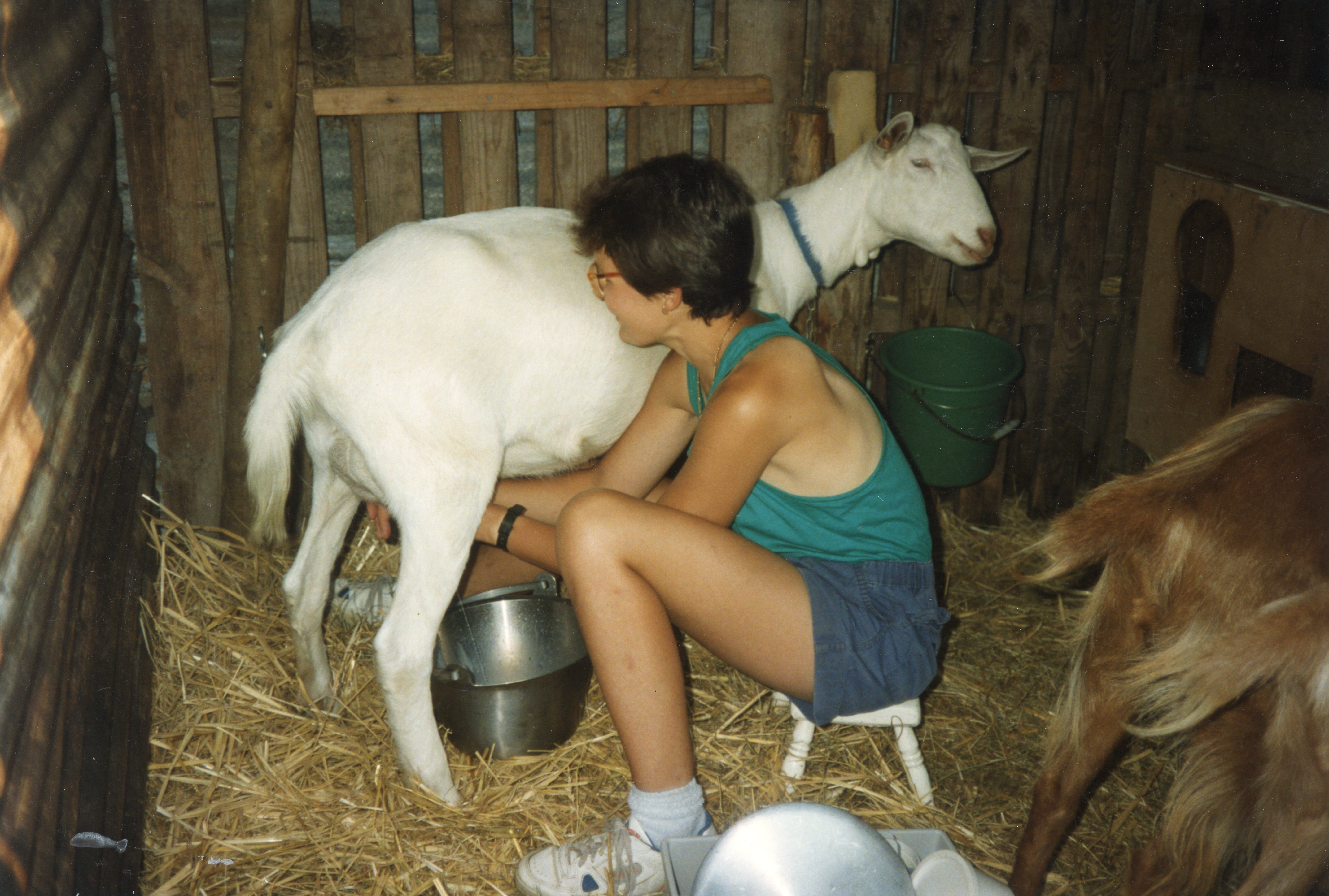