Richard Fawcett has been very helpful to the Dairy Days project already as the stackstands we surveyed and excavated last Autumn at Floshes Hill near Hardraw are on his land – read more about the site in the blog post Stackstands….latest research. Richard has farmed in Hardraw all his life and is well known locally for his regular sheepdog demonstrations . 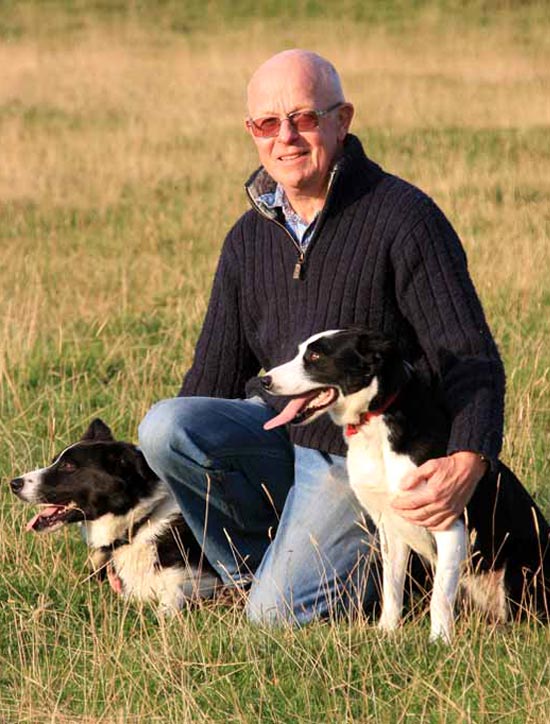 As a boy he remembers the cows being hand milked and during the winter being tied by the neck in shippons:

“We always used to have three shippons where the cows wintered and were milked and that would accommodate about 30/35 cows and sometimes we had rather more so they would be tied up in another little barn and even then, sometimes that still wasn’t sufficient room so we’d have a few down, milking, actually milking in the away barns, so when that was the case, in my day, we had a fella called Jack who worked on the farm, Jack Dinsdale. Jack would go down morning and night with what we called a budget on his back, and a bucket and stool, and he would milk them by hand, down there, then bring the milk back up t’the dairy and then it would be poured into a D-shaped container. It ran down a cooler and then through a strainer into the milk churn. And then the milk churn would be rolled out and lifted onto the milk-stand and taken away by the Dairy lorry.”
Richard Fawcett (72) of The Croft Farm, Hardraw 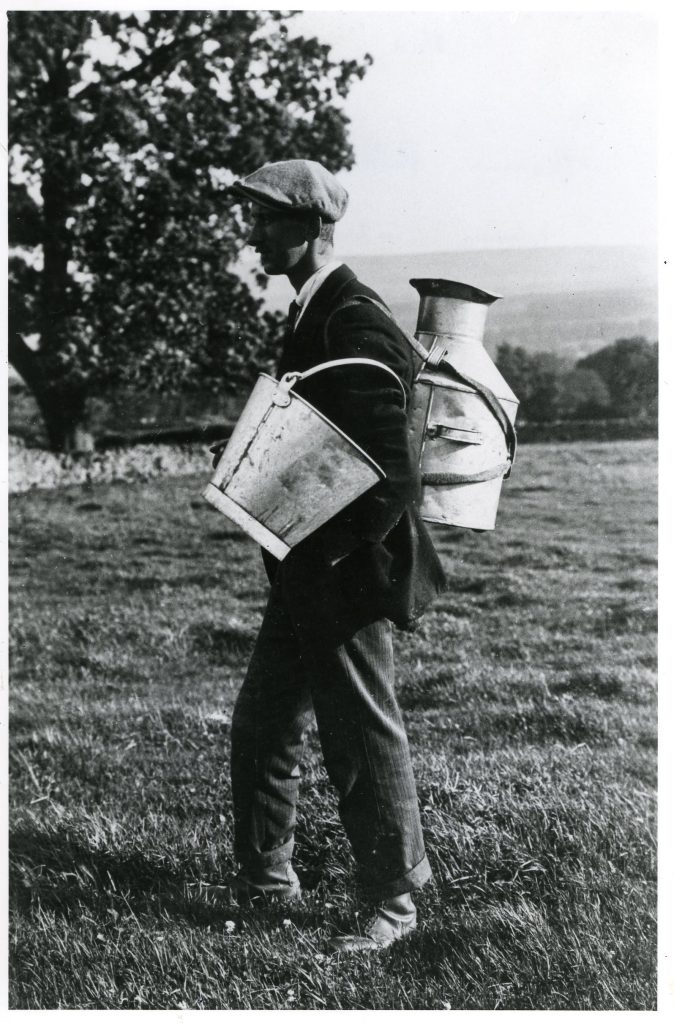 Richard clearly remembers how the cows were tethered in their stalls:

“But the cows at home, they would have a waterbowl, so they didn’t need to be let out. They would need t’be tied up, they’d have a chain round their neck, which went to a ring which would slide up and down a wooden pole, so they could be up or down. And that was attached t’what we called a boskin and the boskin would separate one cow from the next.”

In the following audio clip, Richard describes the cycle of mucking out the cows in the barns in winter and spreading the muck on the hay fields to grow on the next crop of grass to be made into hay for feeding the cattle the following winter. All stored in hay mews:

Making hay was a laborious business, and very much weather dependent. If the mown grass hadn’t quite dried out enough then they had to stack it in cocks or jockeys in the fields to dry.

“…y’would make little heaps, like about that big [demonstrates]. You’d have a row and y’d walk along with a rake, make little heap, and then rake it up and then another one. And they were called jockeys. And then sometimes you’d make them bigger ones, so instead of making two, you’d have one bigger one. And that was a cock…but when it was actually hay you would have a horse and a sweep or subsequently tractor and sweep and they would make, rather than take it back t’the barn and you would just make it there on site or y’might take it to a sheltered spot and build many, many pikes and they’d be about as high as the ceiling and they would stay there, ‘cos it was a lot quicker to do that in those days than t’take it into the barn. And it was all done by hand with a fork, rakes and forks. And then in a dry spell, you would put a chain round the pike and with a horse or tractor, pull it t’the barn and then it would be forked into the mew and that would also help it t’aerate if it was green. It would in theory be better for having been outside. Y’wouldn’t leave it for long, because then the outside part starts t’go stale…”

These memories are quite interesting for our archaeologists because we’re still not quite sure how the stackstands we’ve seen on Richard’s land actually worked. Was the hay left on them permanently all winter or was it just stacked on them to dry before being brought into barns in the winter like Richard’s pikes were?

Richard’s father was keen for him to learn how to hand milk but he was having none of it!

“When I was a boy we were still milking, cows were still being milked by hand, and I remember  my dad saying, ‘it’s about time you learnt t’do this. And at that time, it was just when milking machines were coming into being, and I said ‘no, I’m not gonna learn’ [laughs] ‘I want t’do it the new way’, so I can remember clearly when we changed over to a milking machine.”

Richard was also given a great deal of responsibility in building up the herd and choosing which bulls were needed to produce the most productive heifers.

“…as a young fella, well, as a teenager, I remember  buying one or two particularly well-bred Friesian bull calves and rearing them and then we would use them on the herd. And the AI came into being and it was just so much better because y’didn’t have t’worry about a bull and his behaviour and y’had such a wide choice of bloodlines t’go on so y’d get a brochure with all the information for ten or twelve bulls, you would pick, so I would study those in depth and decide which bull I thought was suited t’each cow and so on. So we did have a good herd.”

In the following audio clip he describes travelling to Scotland in the 1950s to source cows, and contrasting the high-quality Friesian-Ayrshire crosses he bought there with the Holsteins that followed.

Having bought good stock, they kept careful records to ensure that every cow got fed correctly for maximum productivity and which lines milked better than others:

“And we had one shippon across the road, and two shippons on the other side of the road and the milk had t’be carried across the road by bucket and poured into the system that I’ve just explained before. We had a box in the window which contained the nuts which we fed them, so that was t’top up every day and then…we used t’record them, even in those days and feed according to productivity. All the cows had a name and I’ve got records going back t’about 1959, every cow that calved, the date, what sex the calf was. If it was a bull it would be sold, if it was a heifer it would usually be retained for breeding. And all the names are there so if ‘Ann the Fifth’ had a heifer calf, it may well be that there are several other ‘Anns’ so it might, the calf, might be ‘Ann the Sixteenth’ or something, so we kept the family names. And that was useful b’cos you could see which were the best families and concentrate on those and start t’cull the rest.”

The late 1970s saw big changes, a bulk tank was put in the dairy and a new herringbone milking parlour was built. The cows were no longer tied in stalls over winter but allowed to roam in a big new shed and fed on silage rather than hay, as Richard describes in this audio clip.

A huge contrast to his earliest memories of milking on the farm where several men would hand milk sociably together:

“I can remember …the men as we referred t’them, because there was my dad, and he would have, there was always be two men, sometimes three men working on the farm, which is now unheard of, but I can remember them milking by hand, and they always used t’wear a cap, an’it was always a greasy cap, and they would sit there and the’ pushing the head into the cow, that sort of calmed the cow, just sitting there and it was like, it was a get together every morning and night, there’d be mebbe three of them or four of them milking, chatting away. Yeah, there’s very few opportunities nowadays for anything like that.”

It had its downside though, the milk hygiene left a little to be desired!

“…Well, hygiene was, there wasn’t such a thing. Y’sort of wiped the teats, but there’d be bits dropping off [laughing] bits of muck dropping off, b‘cos they can be quite hairy underneath, into the milk, but y’didn’t bother, y’just poured it up into the cooler and it ran through the sieve and when y’cleaned the sieve after y’d finished there was quite a…a lot of gunge there, in the cotton wool, t’disc. I don’t think anybody ever took any harm.”

In those days, the milk was put in churns and left out on the churn stand for the milk lorry to collect it every morning and take it to the Creamery in Hawes. In winter when the lorry couldn’t make it thought he snow alternative arrangements had to be made as Richard describes in this audio clip:

Having taken over the farm from his father, Richard eventually gave up milking in 1992. The big shed is gone and the stone barns are now houses. But he still remembers the cows fondly and the work he put into breeding the herd:

“I loved that, all the cows had names and I knew them as well as I know people and I knew who was a daughter of who, who was a mother of who and grannies…”