In our previous blog post Dairying during wartime we mentioned how the Women’s Land Army played an important role in helping Wensleydale farms keep on producing milk during the Second World War. We were delighted to add depth to this story with a wonderful recording by Marjorie Iveson of the memories of 92-year old Margaret Watson who joined the Land Army from her home in Leeds, aged just seventeen in 1943. 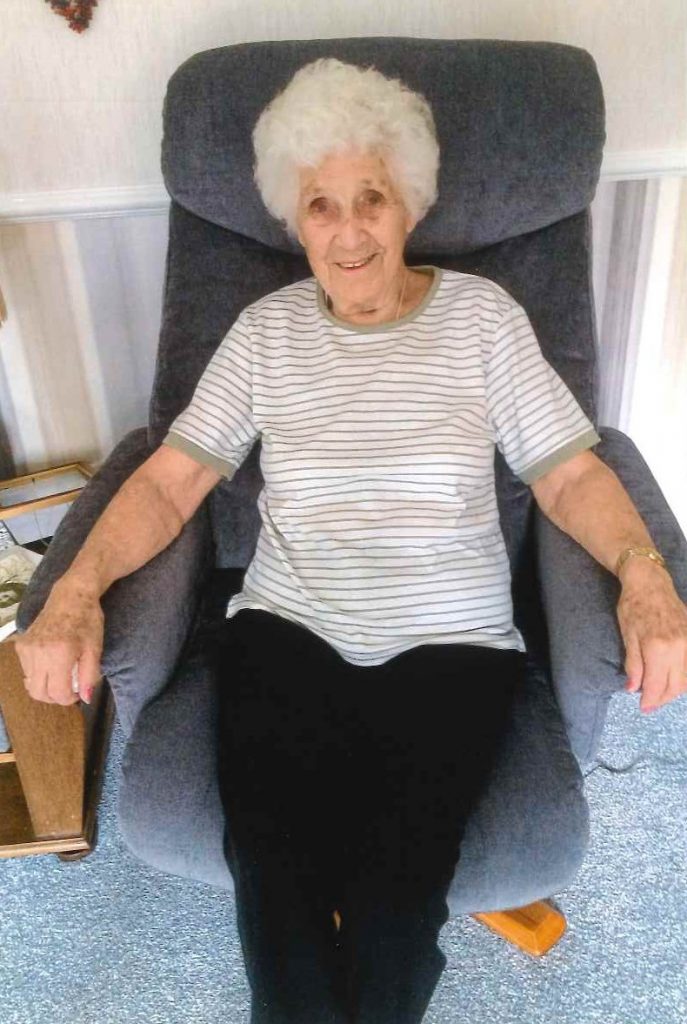 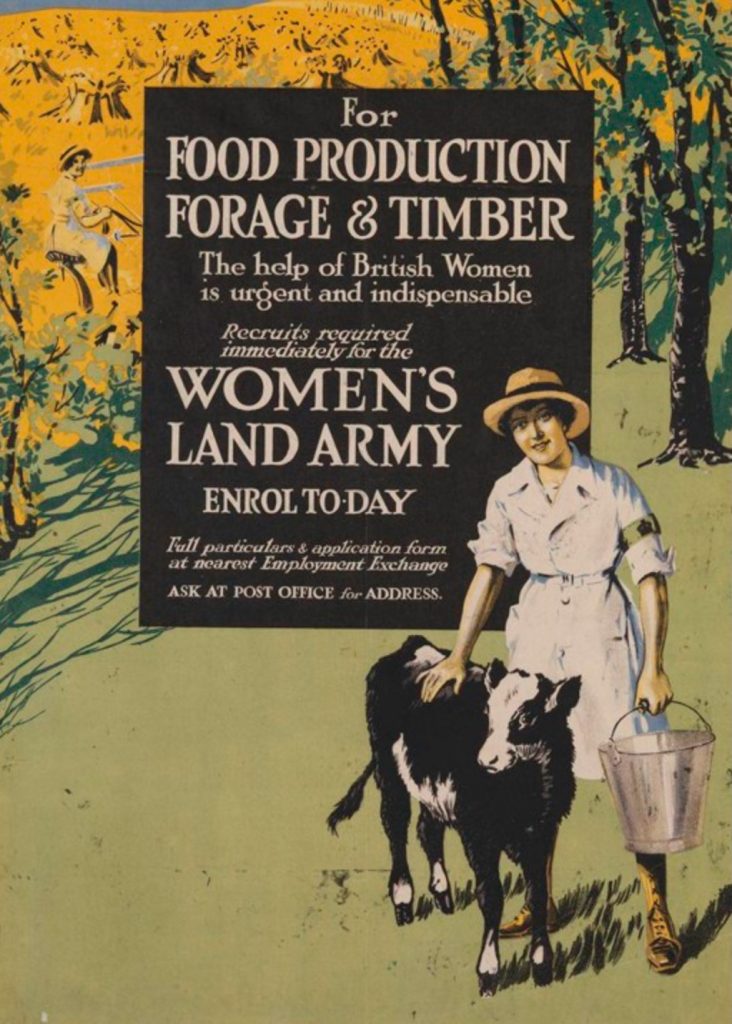 We can only imagine how nervous she must have been setting off on the long journey from Leeds to her assigned farm in Coverdale. It was definitely something of a culture shock when she finally arrived as she describes in the following audio clip:

For a Leeds girl from a relatively affluent background, the primitive conditions on these remote Dales farms was a real eye opener. We’re not sure if it was the lack of a hot water tap or a bathroom that shocked her the most. 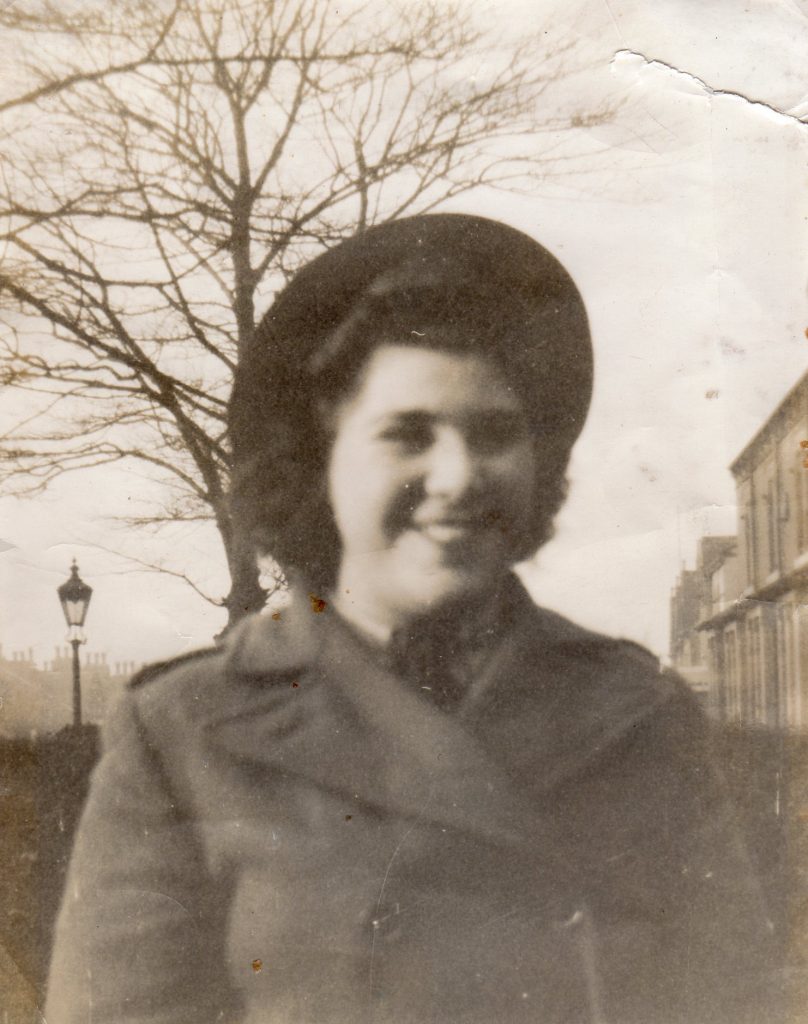 She spent a cold night at Braidley Hall Farm then the next day she was straight in at the deep end with the farmer’s daughter Joyce, learning the basics of how to milk a cow:

“And as I say, next morning, she got me up did Joyce, and she came and the first job we did, I mean, it was about half-past six, aye, it were spring o’year, no, cows would maybe be still in, I don’t think they’d be out. So anyhow, we toddled down t’cow’ouse didn’t we, and I though ‘oh, what’s going t’happen now?’ like. So anyhow, we got down there and Joyce just give me this three-legged stool and a little bucket, and I thought ‘ah?’ And she said like ‘sit down there and put this bucket between your knees’ which I did and then I had t’get used t’sitting on this stool ‘cos they’re a bit wobbly and anyhow and then in a bit then she took me and she put me like at side of this cow. I mean it sat there like and head’s up there and I was sat here and she was going t’show me how t’milk y’see, pull and squeeze or summat, I mean that’s about what she told me [laughing].”
Margaret Watson nee Crossfield (92), formerly of Hindlethwaite Hall, Horsehouse, Coverdale

Listen to her describing her first lesson in the following audio clip:

We’re not sure Margaret would have looked as cheerful after her first attempt at milking as the girl in this publicity photo from The National Archives! 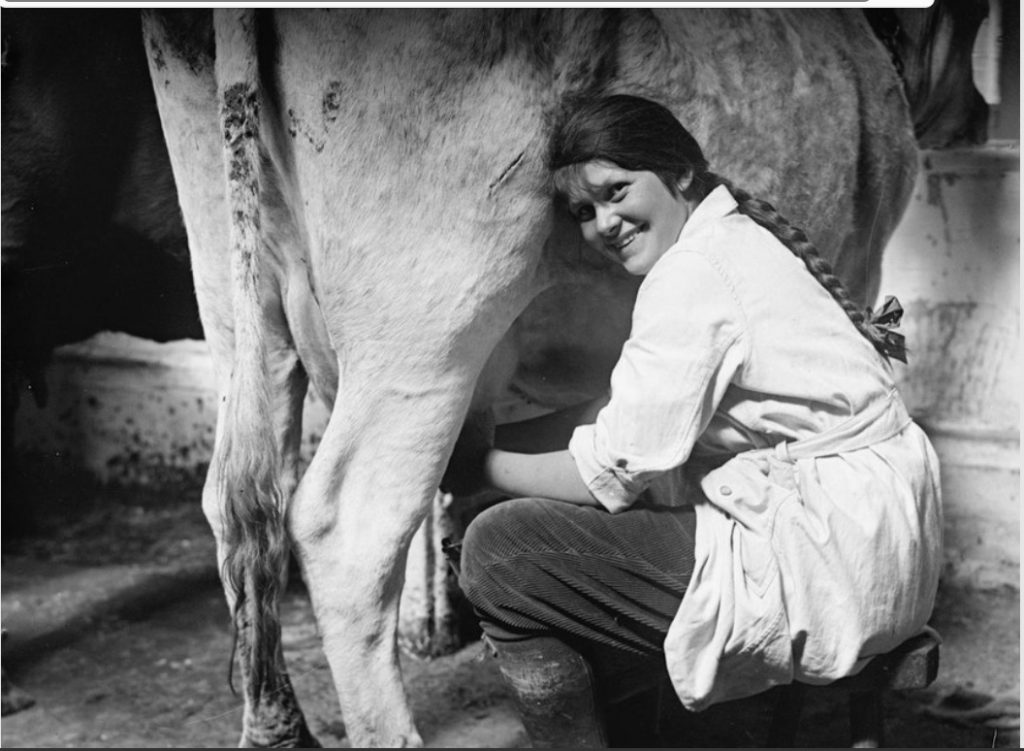 Margaret had already been doing factory work before she joined up and she found that milking took not just skill but also strength.

“I found out that y’had t’be pretty fit, and y’had t’be pretty strong because y’had a lot of things t’lift about. When you were milking, when you got t’milking properly, you had a bigger bucket and y’had t’carry it into cooler house and tip it up into a container at top and it all ran through the cooler, straight into the churn at the bottom, well I mean y’d that t’lift up so y’had t’like pretty strong, no good little weaklings going they wouldn’t have got it up there. And then y’had t’take the muck out in a wheelbarrow, and tip it…”

She didn’t stay long at Braidley Hall, the farmer had wandering hands and her mother on hearing this was adamant that she had to move on. She quickly found a place nearby that suited her better, with a farmer called Alfred Suttill and his wife Annie. They had a much smaller farm and lived in a little cottage in Braidley.

“…nice little houses y’know but they were all alike, they only had one cold water tap [at] the sink. No kitchens, no bathrooms, nothing, a bit what I’d call a bit primitive. As though time had stood still if y’get my meaning? I know it sounds awful, but like, it was such a contrast from town life, and going there and y’d think how on earth did they ever learn t’live like this and just a fire, nothing t’cook on. Some of them had a range in, but a lot of little ones didn’t have a range they just had open fire, so y’used t’think like well what did they cook anything with? I mean they would have t’do!”

If you wanted hot water you boiled a kettle over the open fire unless you were lucky enough to have a cast iron range with a built in water heater, then you ladled the hot water out of that into your bucket or jug and carried it upstairs if you wanted a wash. Margaret describes how on a rare trip home to Leeds, the first thing she did was take a proper bath. But the lack of a bathroom was not the worst thing about life in Coverdale:

“The only thing I hated about the country was the earth toilets. Oh gosh I did hate them things and they were always quite a bit away from the house, y’know, I mean, and it’s like middle o’night, so really y’had t’have chamber pots but they didn’t all provide you with a chamber pot, so what did y’do? [laughing]”

Margaret stayed with Alf and Annie for two years, working on the farm alongside Alf and sometimes even milking the cows on her own when Alf’s preaching duties took him away of a night as she describes here:

The farm was producing two churns of milk a day, from the eight cows, and the milk went to Coverham Dairy down the dale.

“We had a churn like at night and we had a churn for morning and y’went, he went, did Alf, and put it on the milk stand, and put all the churns onto milk stand. And then they came up from dairy, picked them all up and left just two churns for the next day. And it all went down t’Coverham, the dairy at Coverham, that’s it. I think they made cheese with it, but we didn’t make any cheese, but I think they made cheese down there, down at Coverham”

It wasn’t long before the townie from Leeds caught the eye of the local lads, and one in particular, Eddie Watson,  was to become her husband in 1945. They didn’t get off to a good start though as she describes running the gauntlet of the local youths gathered at the village churn stand in Horsehouse:

Once married, Margaret and Eddie moved into a cottage near his family farm at Hindlethwaite Hall, Horsehouse. Here she learned how to be a proper farmer’s wife from Eddie’s mother who taught her to bake and carry out all the other domestic chores:

“…I enjoyed it, it was, as I say, y’lived there and y’learn t’live like they do…you’ve different ideas…on a night, y’got your coal in, and y’got your wood in, and y’filled your paraffin lamps ready for light [at] night, you’d get all these things about three o’clock you’d t’start and if you’d water t’carry you’d carry your water and then you had that like for next day…these cottages we were in there was no water in, it was at the end, at end of street, but y’got used to it. It was like habit, y’did it…you knew you’d t’do it so y’did it…”

She refused however to treat her husband with the deference that other local farmers’ wives showed their husbands:

“…the farmers’ wives, they always called the ‘boss’, ‘oh, the boss’ and I lived next door t’one ‘oh, the boss is coming I’ll have t’go’ she daren’t talk t’you because the boss were coming. And I always said…I started how I mean t’go on and I said ‘I’m not kowtowing’ I said ‘it’s a partnership when y’get married’ I said ‘he’s not the boss’ I said ‘he might be boss outside’ but I said ‘I’m m’own boss inside’…”

There was no more milking for Margaret once she was married, that was Eddie’s job from then on, though like the other wives she would have had  ‘outdoor jobs’ too. After seven years, she and Eddie moved into Hindlethwaite Hall.

“Farmer’s wives, they’d a lot t’put up with. I don’t think the men realised what y’did have t’put up with because y’did outside work, and then, like t’help them and then you’d your inside work as well, I mean and Hindlethwaite, it was a biggish house, it took a bit of following.” 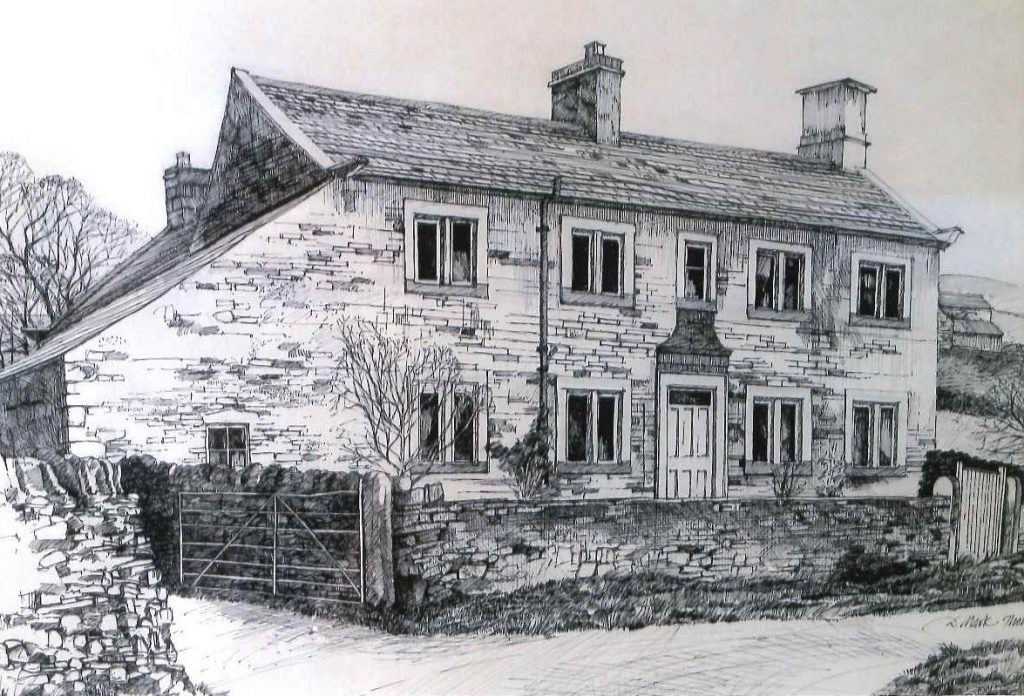 The milk from Hindlethwaite also went to the dairy in Coverham:

“… like 1947, all that snow, had to go, take it down with horse, y’had t’get the milk down there, ‘cos couldn’t keep the milk, y’lost, and that was y’money like, y’know and he [Eddie] went with horse and cart, right down from Hindlethwaite t’dairy and half the time he had t’go through fields and climb over, y’know, ‘cos snow was up t’top of t’hedge…y’d think ‘will he get back?’ ‘cos there was all these big drifts, but that’s how they had t’do it…that was your livelihood so y’couldn’t be throwing milk away so…you’ll do it best way y’could.”

It wasn’t until 2008 that Margaret and all those other remarkably courageous  women who served their country during wartime in the Land Army gained the recognition they deserved. She was invited to a tea at Northallerton and presented with a certificate and badge, though she wasn’t much impressed by the occasion:

“And we had this tea, it was for all the Land Girls, I think, in Yorkshire. Yorkshire tea, it was in the Town Hall, that big hall, and it was a wet day. Anyhow, I went, and Dorothy went and there was somebody else at Leyburn went [laughs] and we sat at this table, and there was this, can’t think what they called this fellow [the Lord Lieutenant possibly?], anyhow, he was there. And he were chattering on about the Land Army and one thing and another and there were ladies from all over place and they were all getting on, they were all elderly like, and then we were going t’get the tea so this big platter come, it had little bits of buns on, hmmm, little bits of sandwiches, nowt much, y’d maybe get a quarter of a sandwich and just a little bun, and that’s all that was allowed like for’y and y’had a cup of cold tea and that was your afternoon tea and that’s all we were worth.” 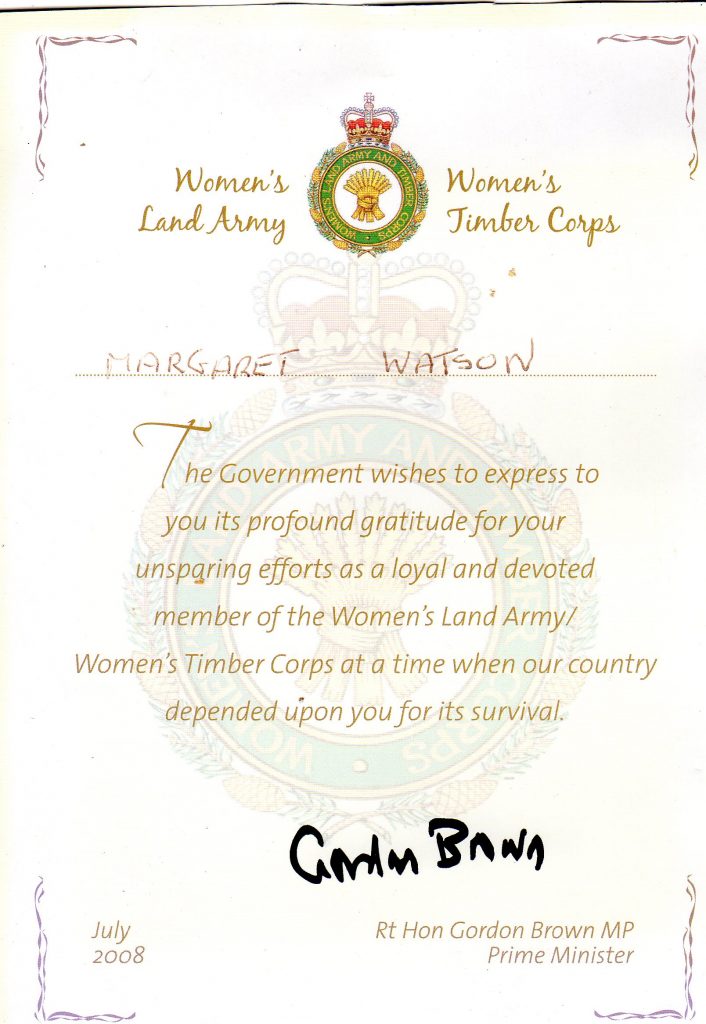 She ends her interview by saying that she has had a good life and a good marriage and that Coverdale has been a real home to her since she arrived there in 1943, indeed, she says she never wanted to go back to Leeds “to stop”, and that people were kind to her and always included her in spite of her posh accent and townie ways!