Our interview with retired dairy farmer George Sledge was conducted by Marjorie Iveson. George farmed at Constable Burton which is at the far eastern end of Wensleydale with quite different soil and weather to the majority of the farmers from Upper Wensleydale that we have interviewed for the project so far. 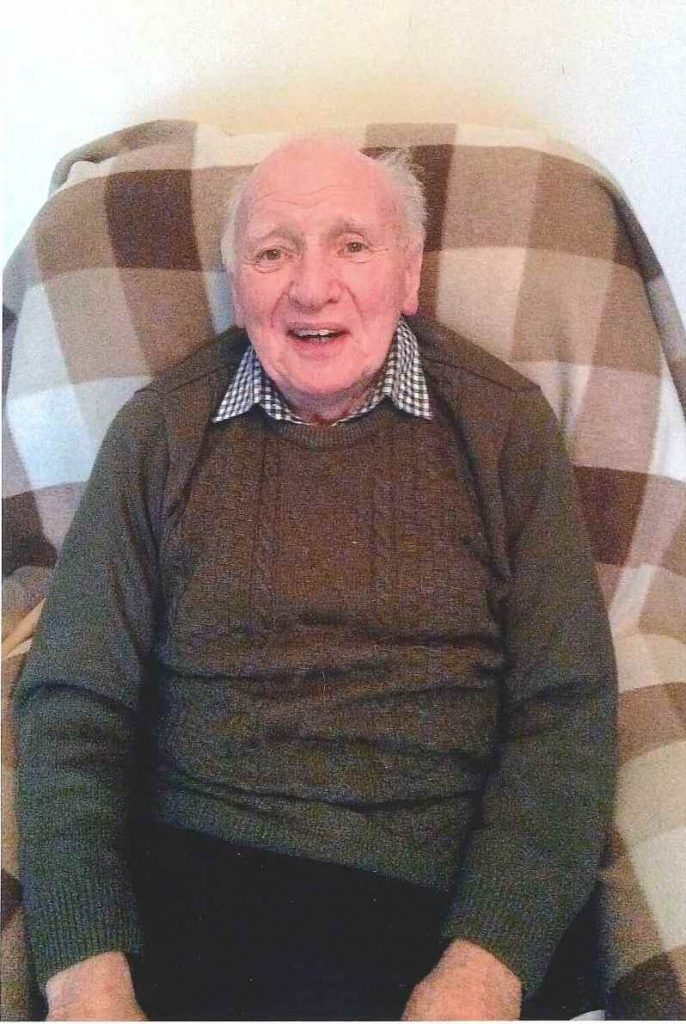 George Sledge’s father Raymond took over the tenancy of Craggs Farm in 1939 when George was just three years old. They were able to grow turnips and corn as well as hay to feed their small herd of dairy cows, along with potatoes for their own use:

“…that’s another thing, potato-picking time. They were always picked by hand and y’got what y’could. Usually children at the back end holidays…we only grew what we wanted ourselves…we never grew t’sell, but some of our neighbours did, yes…[that was the difference between Lower and Upper Wensleydale?] Yes that’s right, yeah. Y’see, once you get down sort of  Constable Burton and below, y’get onto what y’call a lot of arable land. When you start getting above it it’s getting too high really, y’know y’could grow potatoes higher but y’want a favourable time, yeah, but they were all picked by hand…”
George Sledge (82), formerly of Craggs Farm, Constable Burton nr Leyburn

From a very young age, George was helping out around the farm, “At five year old I went to Constable Burton School. At that time, we sold milk to the school which mother and I carried down each morning in cans.”

At fifteen, he left school and started working full time on the farm with his father:

“Mornings started at 6am with the morning milking. At that time we were milking twenty cows, all shorthorns. Father had just bought a milking machine, which was called a Simplex Milking Machine in those days and was known as a ‘bucket plant’. There was two buckets, with a vacuum line round the cow shed and milked into four gallon buckets which were carried away and tipped into a cooler. Later, in the 60s, a milk parlour was installed. The cowshed held about twenty cows – very antiquated. The cows were back t’the wall with their heads t’the middle, with a big rack in front of them, t’carry hay or whatever y’liked t’put in, and big troughs in front which y’fed turnips in. They were cleaned out each day by hand shovel and into a barrow and tipped outside in what we called a ‘midden’ in those days [laughing] and later, into a muck spreader.” 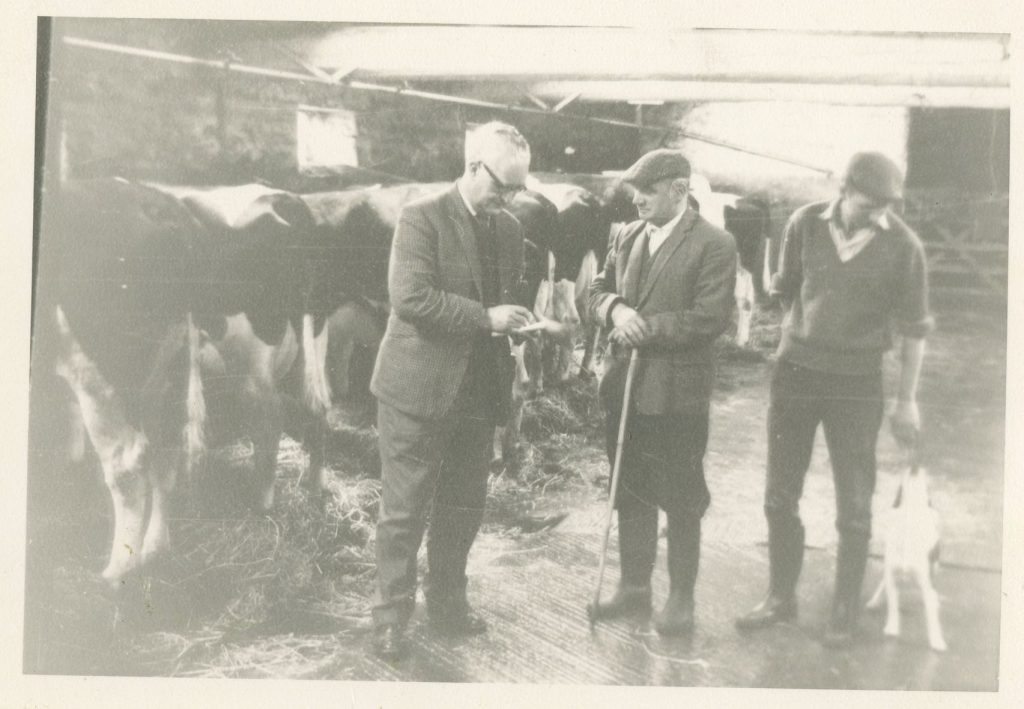 Cows in the shippon at Craggs Farm. Raymond Sledge centre, George to the right. Unknown date. Courtesy of George Sledge

The dairy cows were Raymond’s pride and joy and he became well known for breeding show champions. In this audio clip George tells Marjorie about the hard work involved in taking cattle to agricultural shows. 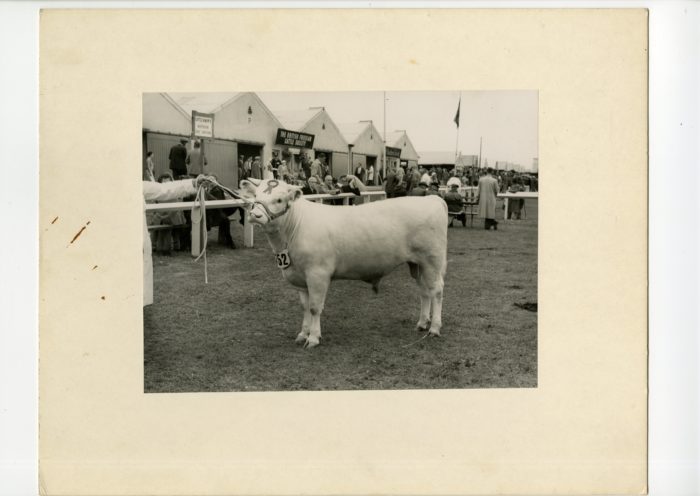 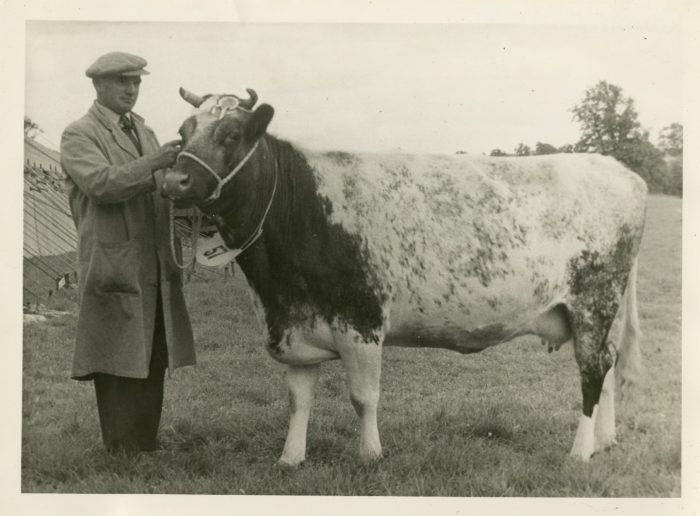 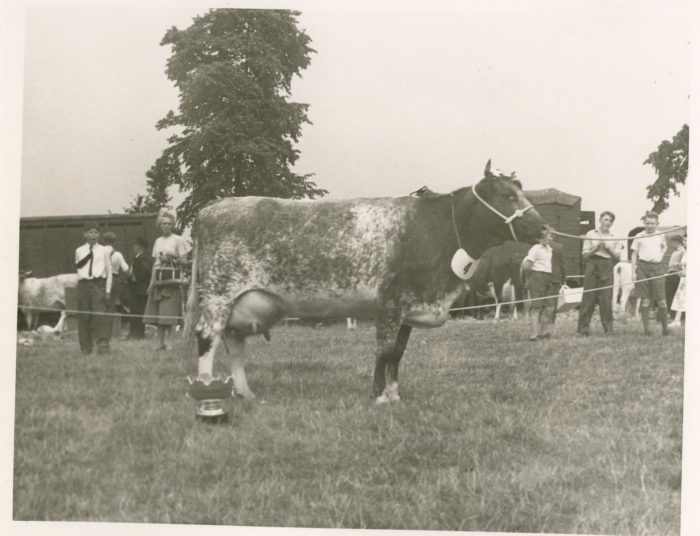 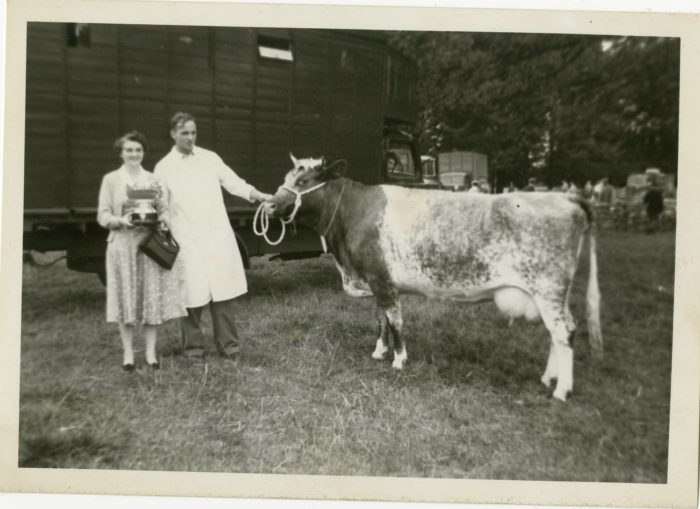 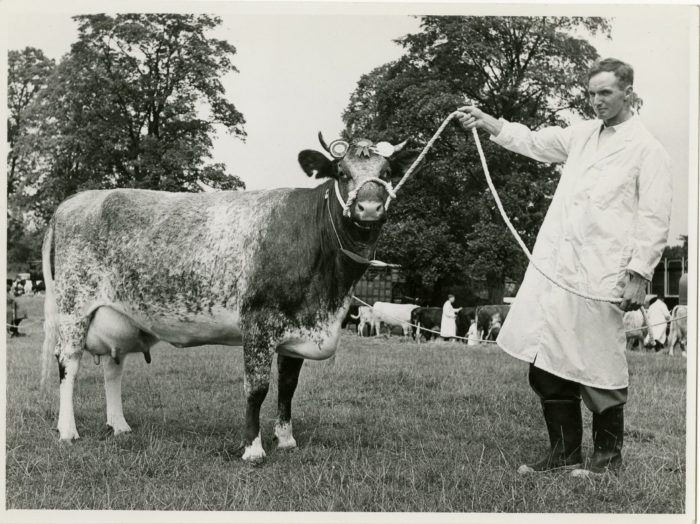 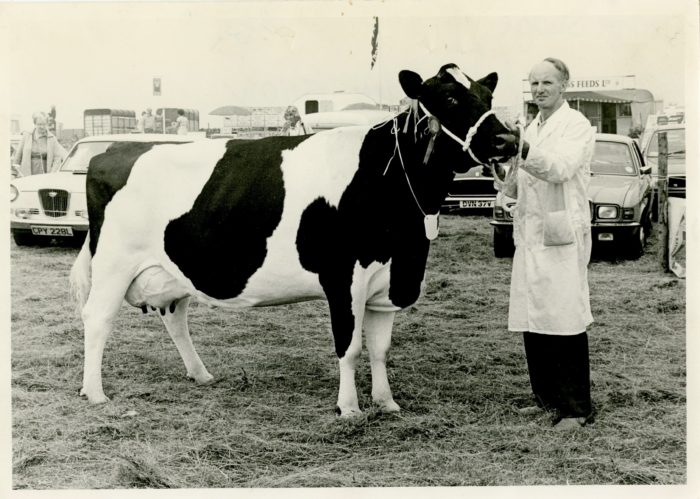 As the photos show, the farm started with northern dairy shorthorns, but they were eventually replaced by Friesians. George’s father took a lot of persuading to make the changeover apparently, as this audio clip records:

Thanks to an allergy, George’s father was forced to get rid of the farm’s horses relatively early on, replacing them with a Fordson tractor (cost £145):

“When I left school at fifteen, it was mainly horses. I think we would have about six horses when I would have left school and then father started with asthma and it was through these horses. If he ever went near a horse, he was so, he had t’go out fairly quick, so that’s why I’ve never used a horse in m’life, but I would’ve done if that hadn’t happened. It was probably a good thing in a way ‘cos it got us onto tractors [laughing]. But he couldn’t, if he ever went near a horse, he was nearly  killed and they said, ‘if y’don’t get rid of these horses’ you know, and it was getting worse. So tractors came into it earlier than it would have done. But everything was done with horses and it’s slow, that’s what I say, that the war changed all that, because tractors came more numerous…”

Father and son were well-known for being innovative in other ways. They introduced a method of storing silage in plastic ‘sausages’ as this newspaper article from the time records. 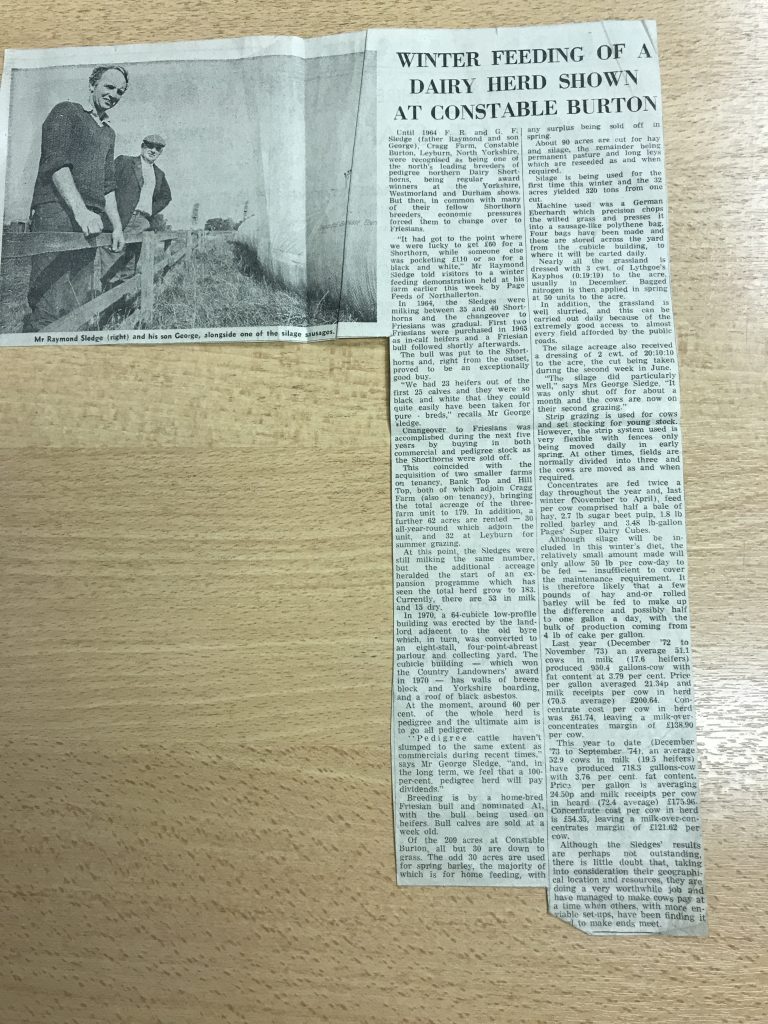 George took over running the farm in 1982, and has seen enormous changes within dairying over the years since, not always for the better in his opinion:

“…you’ve got these Holstein heifers giving ten gallons a day. Well, they’re not going t’last long, some of ‘em only two lactations, and they’re gone. So, cows, going back when I was talking about cows, ten year old some of ‘em, y’know, ten lactations. Y’d be a long time before y’found one today wi’ten lactations [laughing] it’d be long gone. And it’s gradually gone on ‘til, they’ve built up and built up now, ‘til cows…everybody kept cows, a few cows. Today that isn’t the case. There’s men gone out, still going out, but the ones’ stopped is very big, y’know, a lot of people milking cows today, three or four hundred cows is the norm, in’t it? Y’know, we’ve got Washfold up here with 1300. And there is other places in the country, particularly Scotland I’m told, there’s even milking more. So it’s like, it’s created a factory situation hadn’t it really, in a way…they never go out, no, they never go out.”

He remembers a time long before this when someone could make a good living off a small herd of northern dairy shorthorns and just 50 acres of land. At that time, cows were kept for as long as possible and really earned their keep, making good money even when they were eventually sold on, as this audio clip records 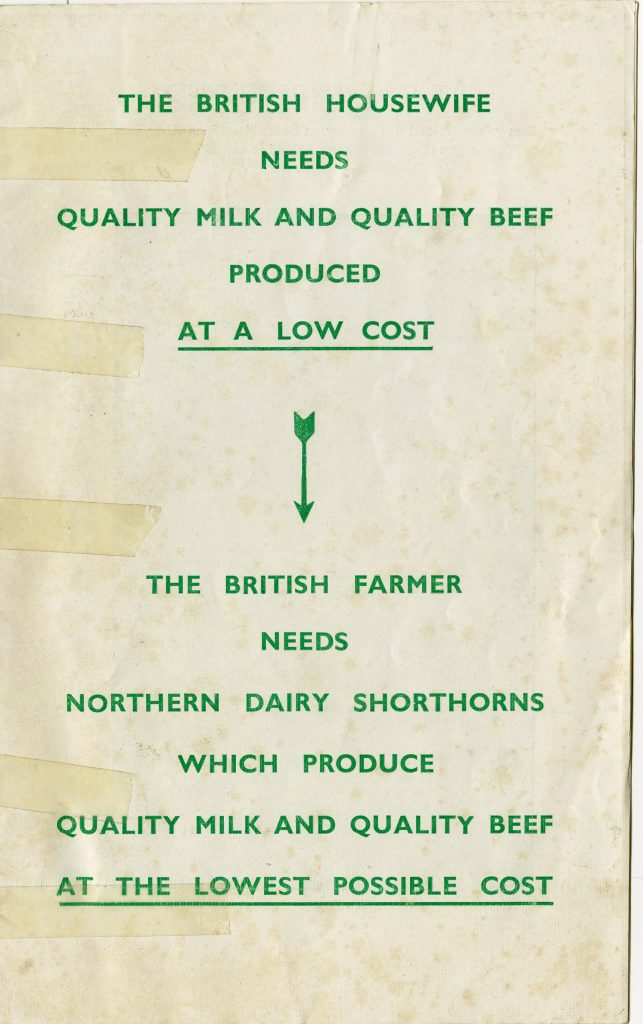 For George, the Second World War was the turning point. The emphasis on machinery and intensification that followed led to all the changes he has seen in his lifetime, changes which he believes will continue into the future:

“I still think there’ll be changes…this is just my personal opinion, I don’t think, twenty years’ time, men’ll still stand and milk cows…yes, there’s a lot of robot milkers getting about but they have teething problems which are t’overcome. I mean it’s all through onto y’mobile phone. If anything goes wrong in the middle of the night, and that phone bleeps, well you’ve got t’go and see. Might only be a pipe off, it might be nothing much at all, but y’ve got t’go and see. So, it isn’t foolproof yet [laughs].”