Our newly-trained team of oral history recorders is busy setting up interviews with our first group of local people with dairying memories to tell, but in the meantime, we have already transcribed our first interview – recorded by Dairy Days project officer Karen Griffiths last month.
We were contacted by Eileen Cockburn after she saw this lovely photograph published in The Dalesman accompanying an article about the project. 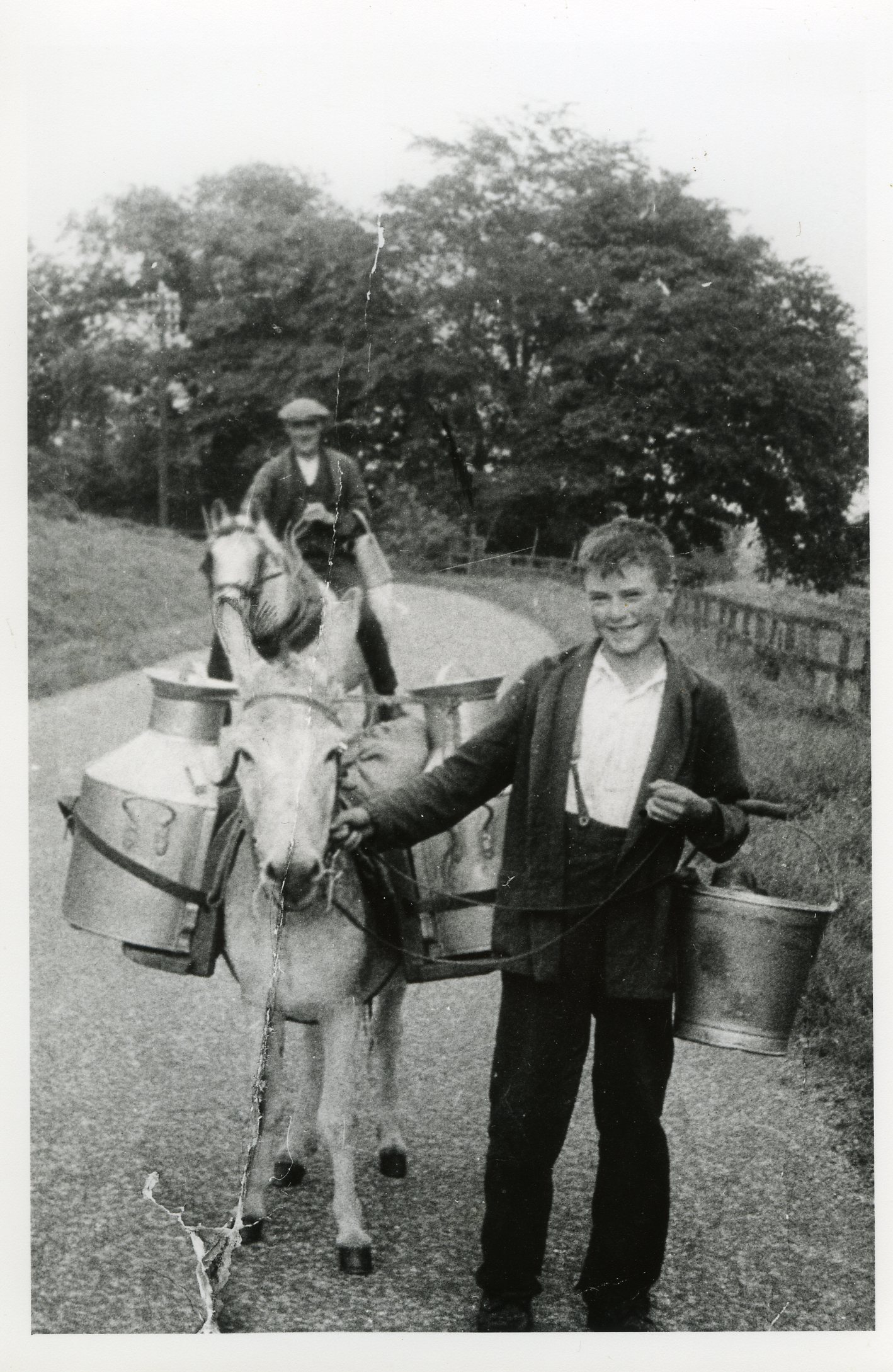 It turns out that Matt was Eileen’s older brother and that they both grew up on Hogra Farm in Redmire where her father and mother had sheep and dairy cows (plus six children!).

Her father Ernest at the back of the photograph is riding a flea bitten grey mare called Bonny, a hard-working Dales pony still fondly remembered by Eileen. Matt is leading a donkey (with no name!). They are returning to Hogra farm having hand milked their cows out in the fields.  The donkey is carrying two heavy backcans full of milk which is on its way to be cooled, sieved and then stored in churns ready for collection the following morning.
As a child, Eileen also used to accompany her father when he was milking:
“Well the lids were quite deep on a backcan, so it didn’t bob off … and he would turn it upside down and milk a little drop of milk into the lid and give it to me and I would drink it straight from the cow all warm and frothy and I loved it, but I know a lot of people don’t like that idea [laughing].”
Eileen Cockburn (nee Heseltine) (82),  formerly of Hogra Farm, Redmire
She had some interesting things to say about the different types of churn used at Hogra:
“…before y’get t’the actual railway station, there was a dairy and that was where m’father used t’take milk when he was first at Hogra Farm and it used to go by rail t’ a think it was Middlesborough or somewhere like that. And they used t’have t’own their own churns and they were bigger ones and they were a different shape, they sort of came up to a waist and he used to say that they had to be very careful cos somebody’d take your churn if they were a bit short [laughing] there were a few altercations I understand at times over these milk churns”
She is describing the conical style of churn seen in this early photograph taken at Askrigg Station. 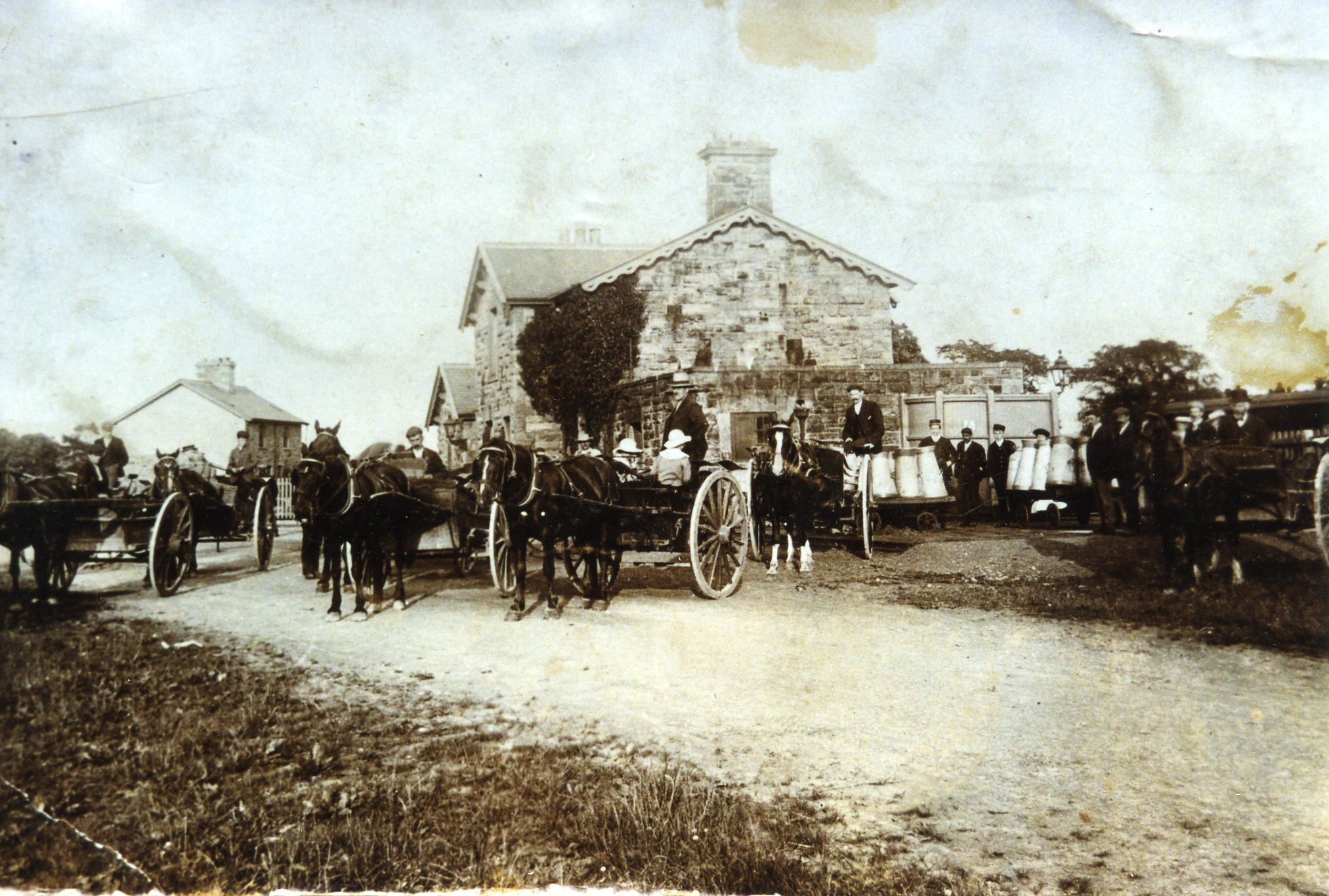 Redmire Dairy seems to have been making cheese before the Second World War – it was owned by R & T Mason and opened in 1900 and was eventually bought out by Kit Calvert.
After the war, Hogra’s milk went to the Express Dairy in Leyburn and the more familiar style of milk churn was owned by the dairy which washed them out and sent them back each day by lorry.
“…and then it went into the churn, the milk churn, which were ten gallon milk churns…this was, in the evening, and then in the morning, and in the morning, they were filled and measured, they had like, er, oh, a measure on the outside, so y’had a rough idea how much milk y’had in them, and y’labelled each one and they went to a communal, in our village, there were communal stands for the churns and then they had to be there by a certain time and a flat-bed lorry from Express Dairies at Leyburn came round and collected y’milk and took it t’there, and then you were paid monthly by the Milk Marketing Board at that time.” 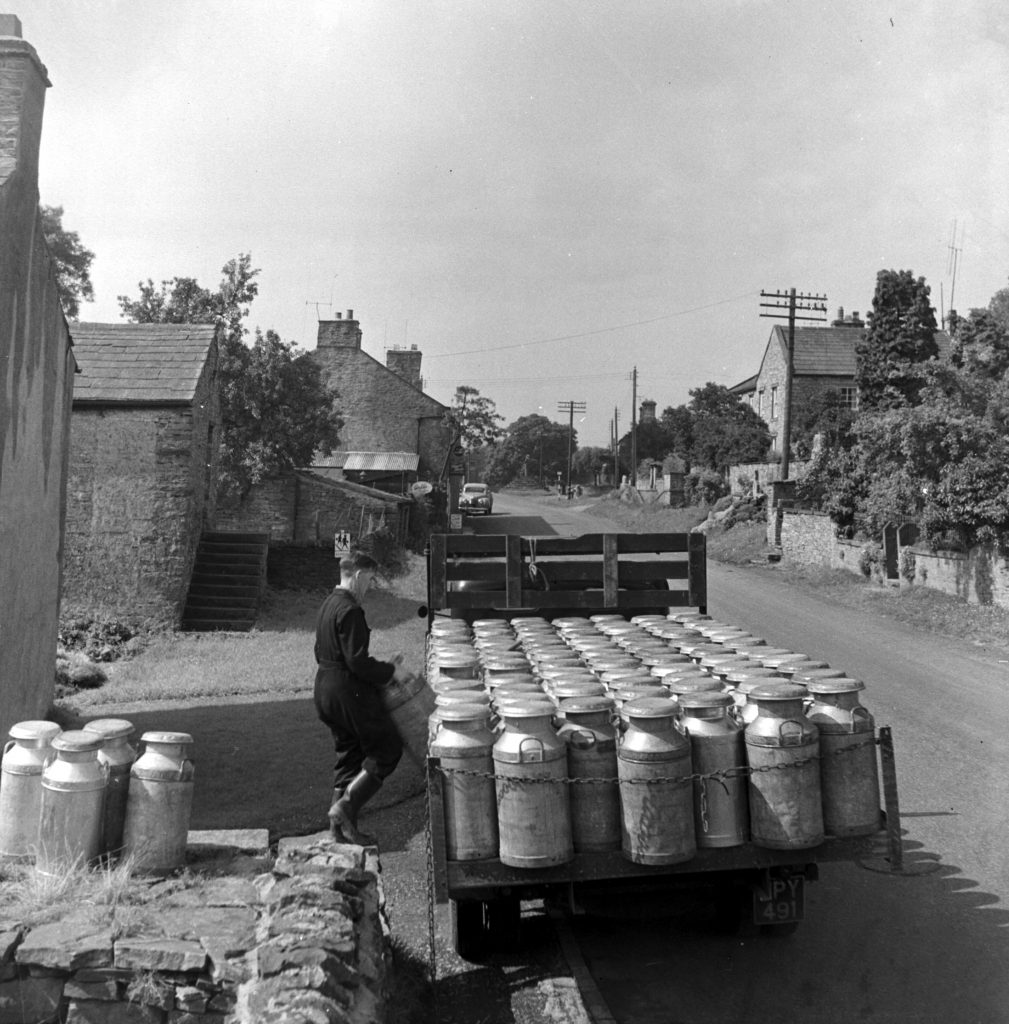 In the following clip – listen to Eileen and Karen discussing the housing of dairy cows in barns at Hogra over the winter.

We’ll publish more from our interview with Eileen once she has checked that we’ve spelled everything correctly!
UPDATE: all approved and Eileen has also sent us two photographs to add to the archive at the Dales Countryside Museum.
The first is a younger version of Matt, this time actually riding ‘donkey’ with its backcans 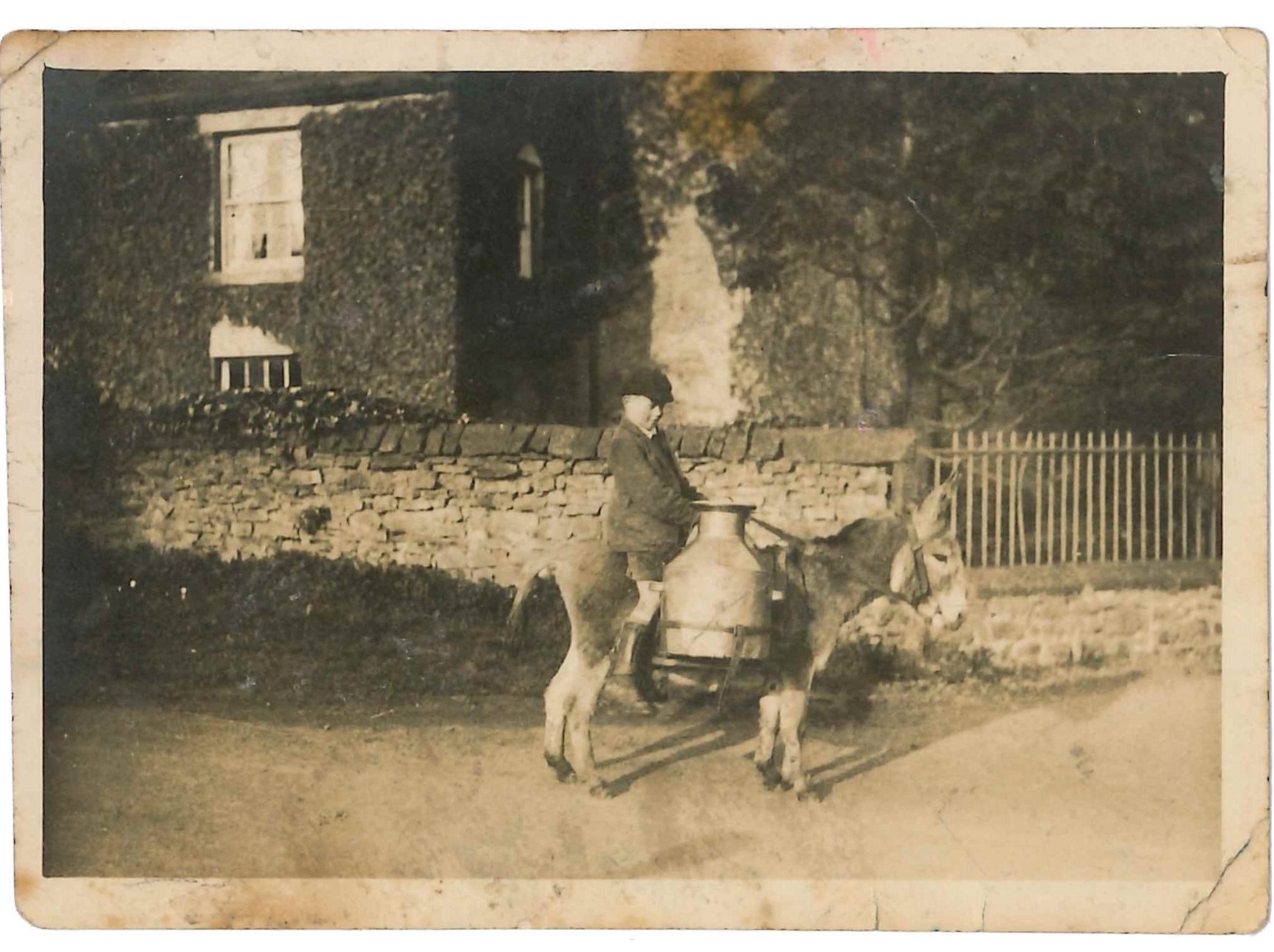 Matt Heseltine and donkey with backcans. Courtesy of Eileen Cockburn

The second dates to 1986 and shows the adult Matt’s cows ready for his dispersal sale when he retired from farming. 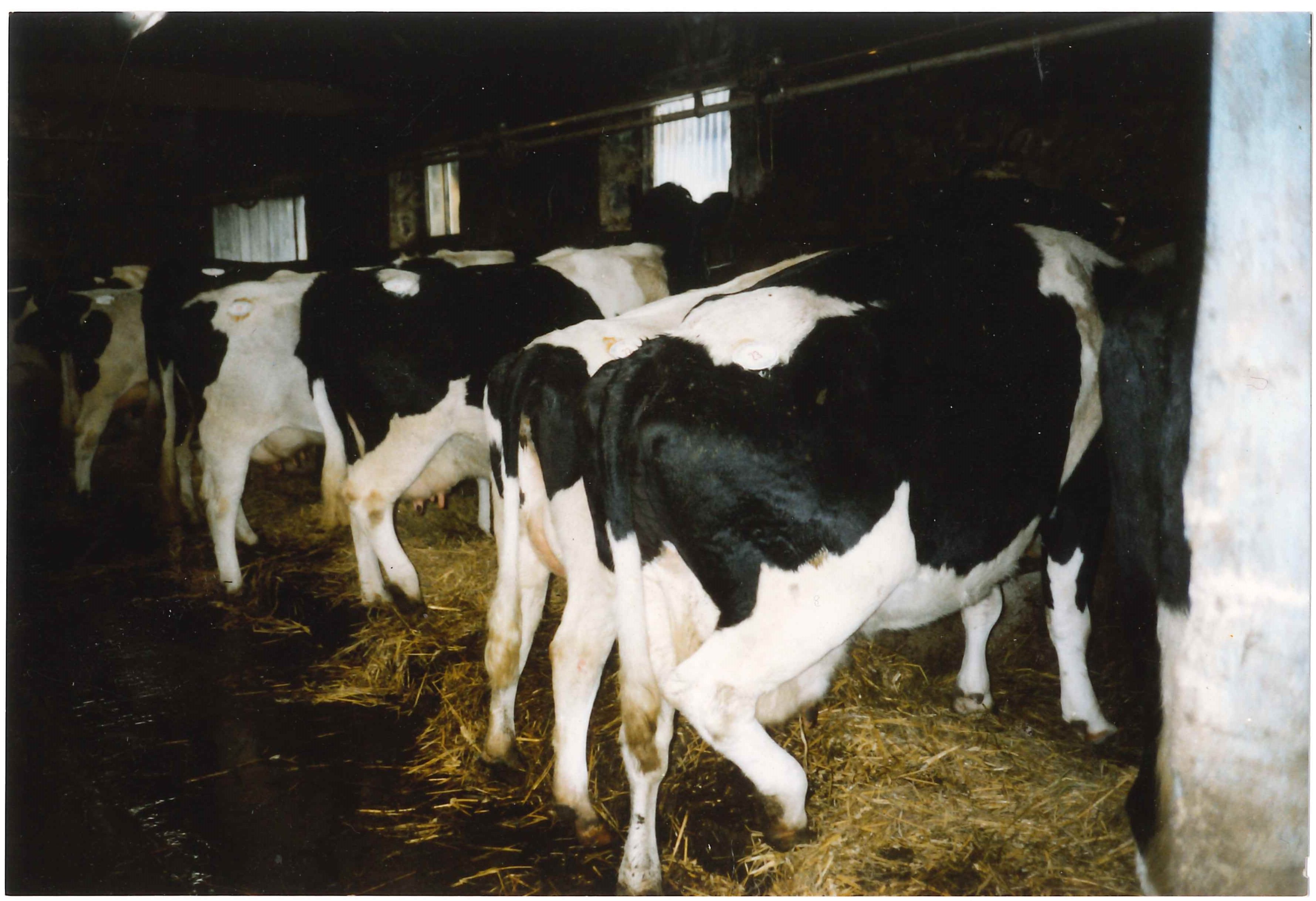 Matt’s father started out with dairy shorthorns but Matt ended up with Friesians as Eileen describes:
“I think it would be in the 50s actually, m’dad along with many other farmers found out that the Friesian cows gave more milk than the dairy shorthorns and so they crossed the dairy shorthorns with a Friesian bull and kept on crossing until they were sort of more or less pure Friesian and so then after that we had all black and white cows and they did give more milk I think. They always used to say they didn’t think they gave quite as good a quality, but I think they did quite well really…by that time we built this, a new barn at home, m’dad and m’brother built it themselves and so all the milk cows were housed in that, I mean it would have been for about 20, 30 cows and they were all there at home then and they were milked by milking machine…The only trouble was they had to be walked from the cow pasture t’the milking place and back again twice a day. Mind you it wasn’t as bad in them days, there wasn’t quite as much traffic about, but … m’brother had a very good dog and he just used t’say, ‘right’ and I don’t know just what the command was, he would go right up the side of the cows and push them all into the wall so the cars could overtake…”