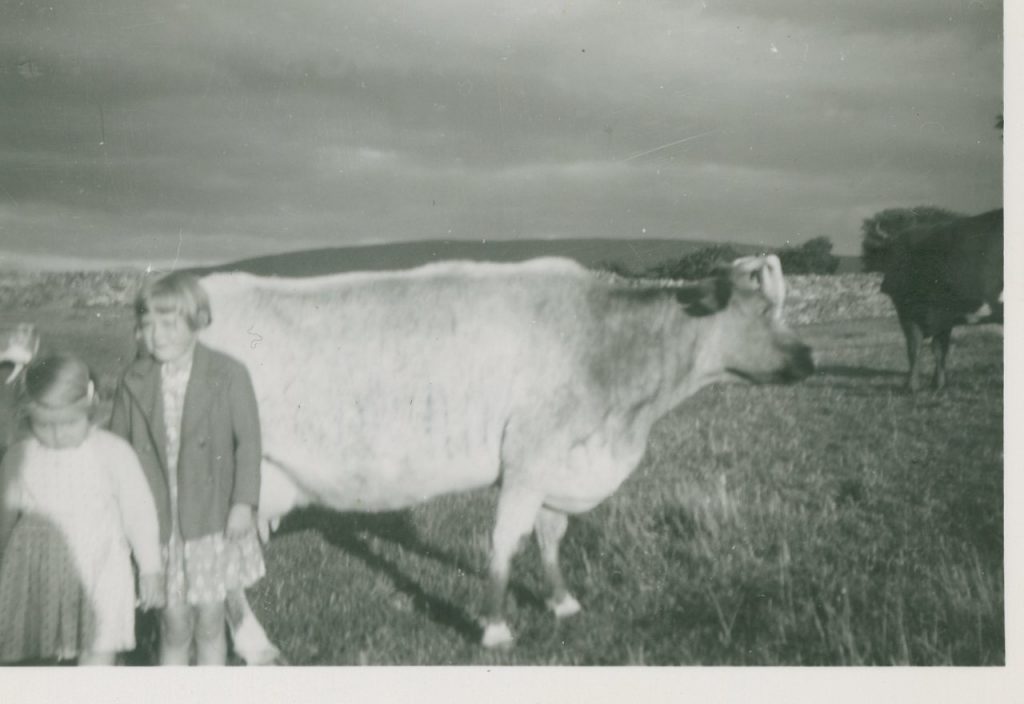 A young Edith Heseltine and her sister Mary in the 1950s. Courtesy of Edith Pratt

Edith was keen to talk about her grandfather Christopher along with other members of her family involved in dairying in the past.

“I want t’talk about m’grandfather who I didn’t know, granddad Christopher Heseltine was born in 1882 at Swinacote [Farm], Thoralby. When he got married he moved to Hestholme Farm, West Burton. 1920s, he moved to Heaning Farm at Thoralby. ”
Edith Pratt, nee Heseltine (65), formerly of Studdah Farm, Bellerby 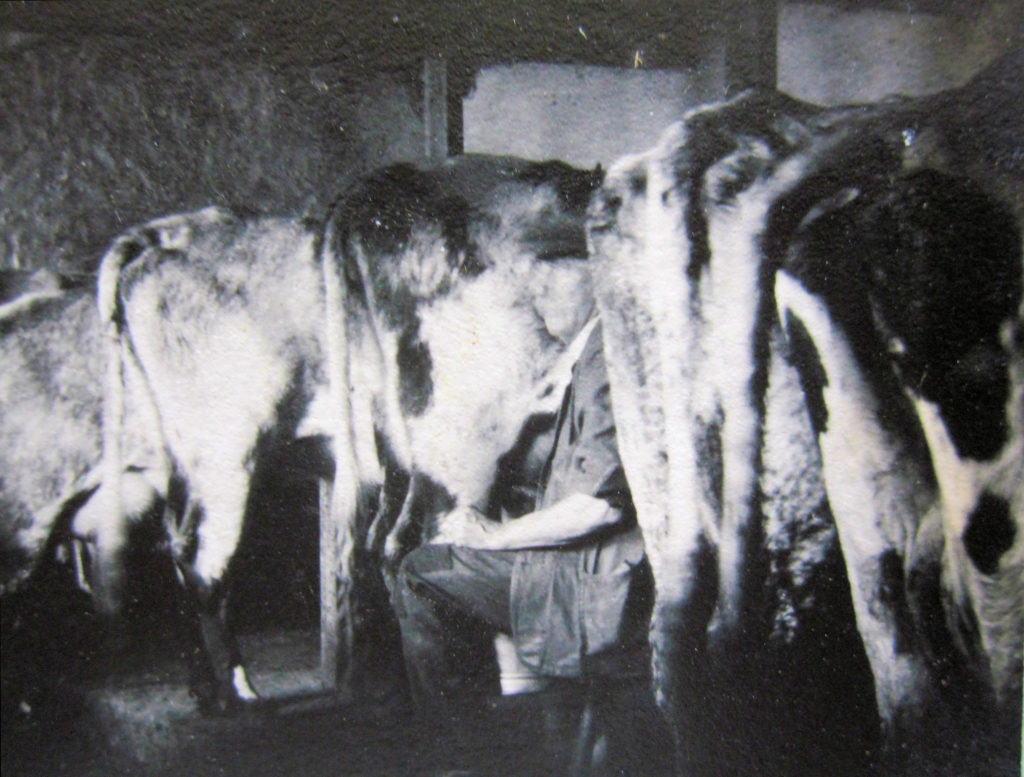 Local historian Penny Ellis has reproduced maps of farms in the Thoralby area including Swinacote  and Heaning on her fascinating Thoralby Through Time website.

In the following audio clip Edith describes finding her grandfather’s milk records from the 1930s which showed that he was supplying milk wholesale to United Dairies of Bayswater, London. The company was a great rival of Express Dairies apparently: 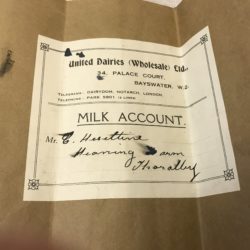 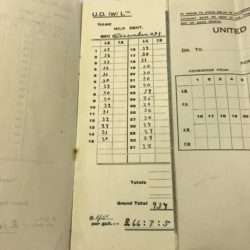 Christopher’s milk went to London via Aysgarth Station, one of several stations on the Wensleydale line which transported milk up until 1932 when milk lorries took over (see The Wensleydale Railway by Christine Hallas (2004 4th ed) Great Northern Books Ltd for further details). 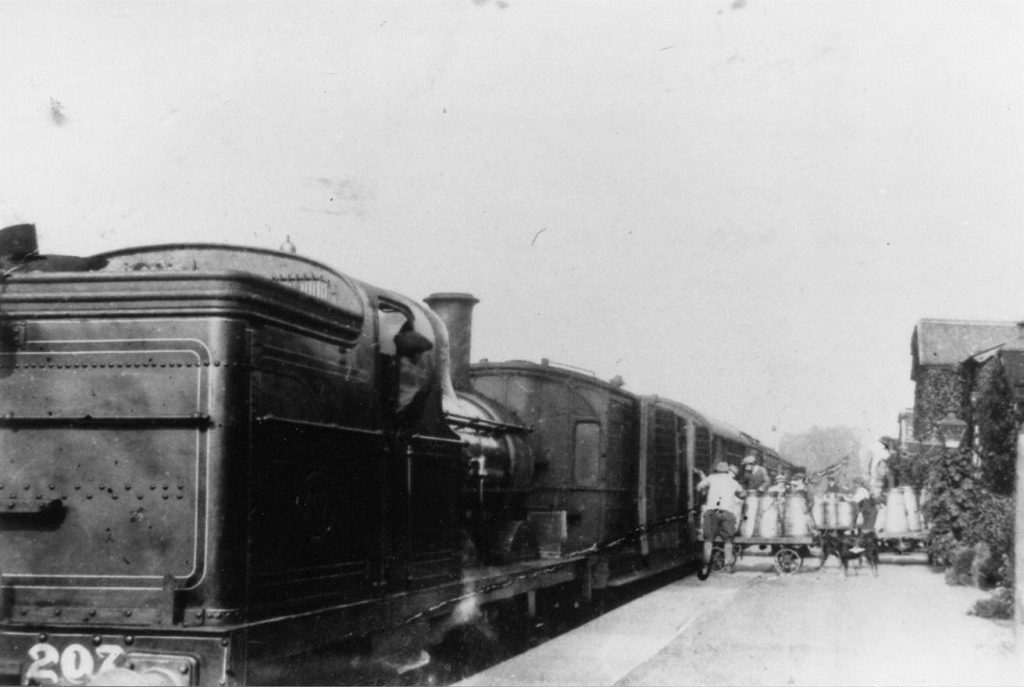 Churns being loaded onto a train at Redmire Station c1920s. Courtesy of Christine Hallas

Christopher died in 1946 and Edith’s father took over dairying at Heaning until 1956 when he managed to buy his own farmland at Aysgarth and build a bungalow for the family to move into. Edith remembers being made to walk all the way from Thoralby to her new home in Aysgarth aged three!

“So he sort of built it up from there. He used t’milk down at the barn. He wouldn’t milk more than a dozen t’fifteen cows and then m’sister and I used t’take it in turns t’bring the milk in the churns from the barn t’the fridge house t’be cooled, with an in-churn cooler…that would be when it [the milk] go t’the Express Dairy at Leyburn…and the man that came t’pick it up was called Pills at Askrigg, but he liked you to have it out on time sort of thing [laughing]…with a wagon…yes, he had a lorry by then.” 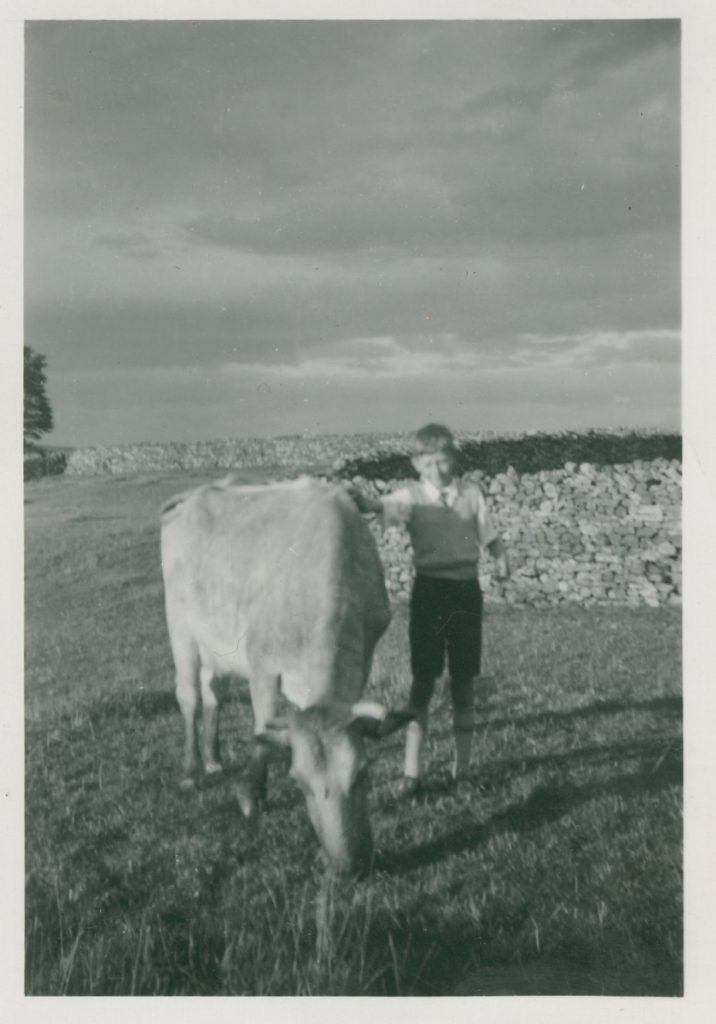 Eventually his son, Edith’s brother John, took over and John went on dairying until Foot & Mouth took him out in 2001 after which he packed it in. In the meantime Edith had married and moved to Studdah Farm, Bellerby with her husband Alan who also milked.

Dairying has definitely been in Edith’s family for generations:

“M’mother’s parents, they were also, they were married at Askrigg Church in 1922, and they moved to Liverpool to be cowkeepers…m’mother met m’father when she came back to Thoralby on holiday. [What’s a cowkeeper?] Well, they keep cows in a street, at end of a street, in a barn, never let them out, ‘cos there’s streets, they had t’, the wagons would come in with the hay, hay for them and take the manure away…you haven’t heard of a cowkeeper? Oh quite a few from this area went to Liverpool to be cowkeepers. A lot of them came back as well, t’the Dales eventually.”

Edith’s maternal grandmother was Rose Webster and she appears in this family photograph. 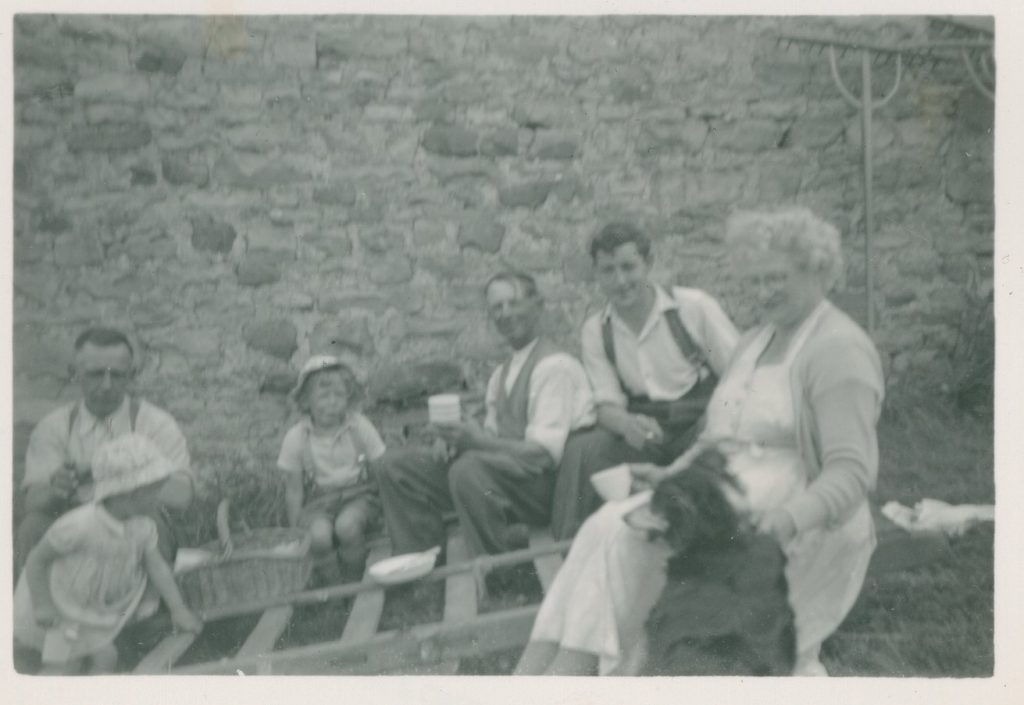 Read more about cowkeepers  in our blog post Wensleydale cowkeepers in Liverpool.

“It’s always been dairy for me, yes. M’father was dairy and m’grandparents were as well [laughs]”

UPDATE
We’ve done some research into the Liverpool branch of Edith’s family with the help of Penny Ellis. Edith’s mother’s parents were called Matthew H. & Rose Webster. We found them on Dave Joy’s Cowkeepers of Liverpool website. Matthew Heseltine Webster to give him his full name, was a descendant of the Thwaites through his mother, and so, part of a large Liverpool cowkeeping dynasty originating in Garsdale. Matthew’s parents Hannah Thwaite and Robert Webster were married in Aysgarth in 1855 and Matthew was born in 1891.

The 1891 census for West Burton shows Hannah & Robert Webster living at Cross Farm in Walden. The 1901 census has their son Matthew Webster, aged nine, living with them along with five brothers & sisters but by the time of the 1911 census, the Websters have left the farm in Walden.  Robert has died and we think that his widow Hannah Webster is now living over the hill in Newbiggin, Bishopdale working as a ‘monthly nurse’ and with four of her children still at home.

Matthew Webster, aged 19, appears in the same census having left his family and found work at Low Gill Farm, Aysgarth. It’s clearly a dairy farm given that there are three women recorded doing ‘Dairy Work,’ two daughters of the farmer and a servant. We also know that the farmer – Mark Hammond –  is listed as the top prize winner in a competition held in Leyburn in 1890 to find a cheese worthy of sending as a gift to Queen Victoria – read all about it in our blogpost Cheese fit for a Queen. 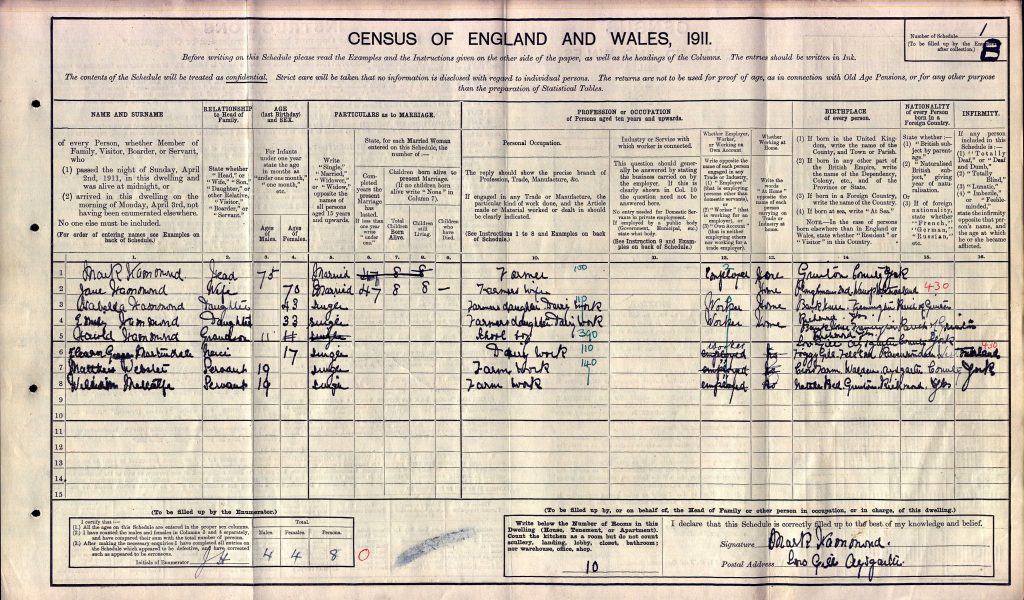 1911 census for Low Gill Farm, Aysgarth. The National Archives. With thanks to Penny Ellis

Penny Ellis has tracked Matthew through his World War I service records – he leaves Low Gill and joins up in 1915. His mother Hannah, is listed as his next of kin on the record, and interestingly she has moved to Liverpool, living at 32-34 Longfellow Street, [off] Lodge Lane, Liverpool. 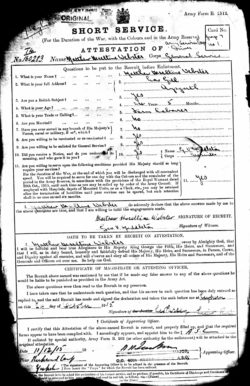 Part of Matthew Webster’s WWI service record. The National Archives. With thanks to Penny Ellis 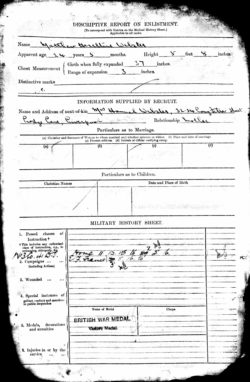 A quick look on Google Street View reveals a modern terraced house tacked onto the end of a row of older terraced housing at 32 Longfellow Street. The remains of a tell-tale cobbled cart entrance still survives in the pavement in front – it looks very likely to have once been a cowhouse. 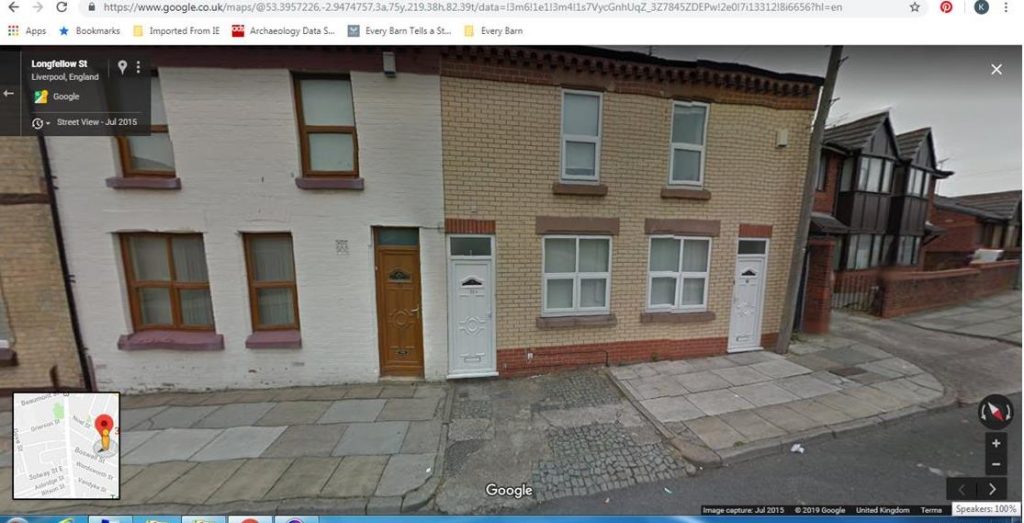 Google Street View image of 32 Longfellow Street, off Long Lane in the Toxteth area of Liverpool

The 1911 census of Liverpool cowkeepers on Dave Joy’s website shows us that we are correct – the premises are listed as the residence of cowkeeper Ann(e) Parker, originally from Barton in Lancashire. There’d been a cowhouse there since at least 1894 when it was owned by a William Owen. It’s unclear how Matthew’s mother ended up there but as we’ve already seen, her late husband’s family, the Thwaites, were part of an extensive dynasty of Liverpool cowkeepers so it seems natural for her, having been widowed, to take up an opportunity nearer her husband’s family members in Liverpool. She dies in Liverpool in 1932.

Matthew serves in the Army in both France and Italy, survives (unlike his fellow dairyman   Ralph Tiplady Metcalf who died of influenza on his way to Italy), and is finally discharged in 1919.  He does not return to his farm work at Low Gill however – his home address is shown as 22 Newstead Road [off] Smithdown Road, Liverpool. No cowhouse is recorded at that address in the trade directories and censuses although the end of terrace premises appears to have since been demolished and new housing built on it, with the Victorian terracing surviving intact next door which may possibly indicate commercial use.

Twenty years later, we pick up his story again. He seems to have worked his way up to owning his own Liverpool cowhouse. Kelly’s 1938 Directory of Liverpool lists him  in the Edge Hill/Wavertree area of Liverpool as a dairyman.  His premises were at 75/77 Wrayburn Street which was just a stone’s throw from Newstead Road. Wrayburn Street was apparently demolished in the 1970s as part of slum clearances, but old maps of the area show it as one of several terraced streets running north to south between Spekeland Road and  Earle Street. Just to the north was the Spekeland Hills railway goods depot where amongst other things hay was brought in from the surrounding countryside.

We found this 1970 photograph of the street showing a walled yard which may even have been the location of Matthew’s dairy. 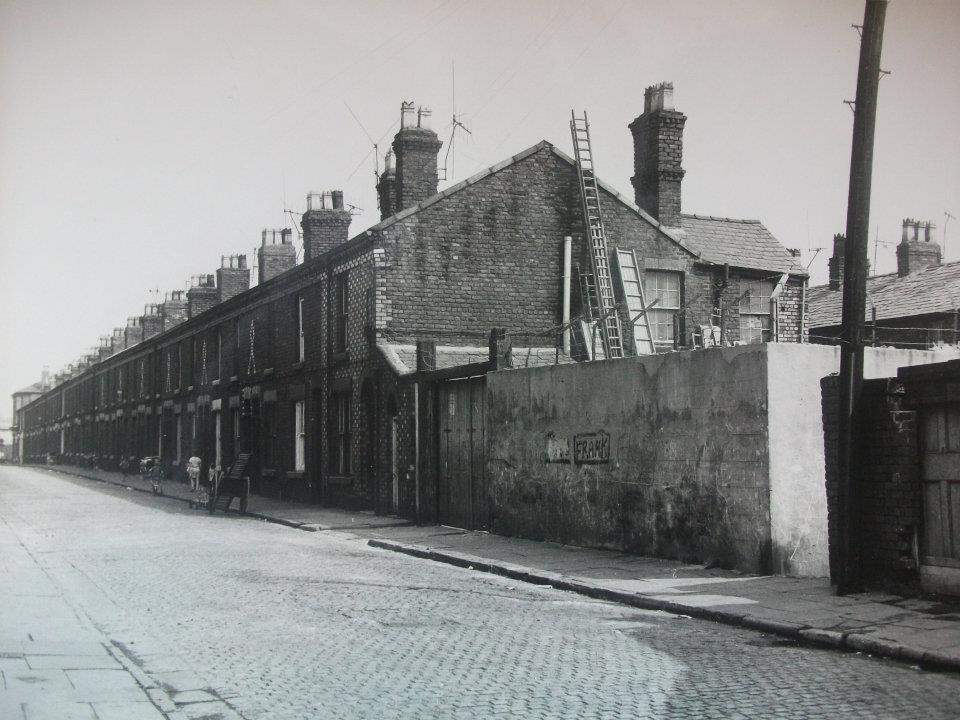 Wrayburn Street in 1970 from https://www.liverpoolpicturebook.com

And even better, Penny Ellis has contacted one of his descendants and obtained a photograph of Matthew looking happy and prosperous in his role as cowkeeper. 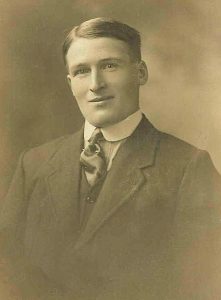 Matthew dies in 1939, not long after his mother. His widow Rose Webster appears to continue the dairy business at 75-77 Wrayburn Street as we can see from an entry in the 1939 ID Register for residents of that part of Liverpool, that Penny Ellis tracked down for us. 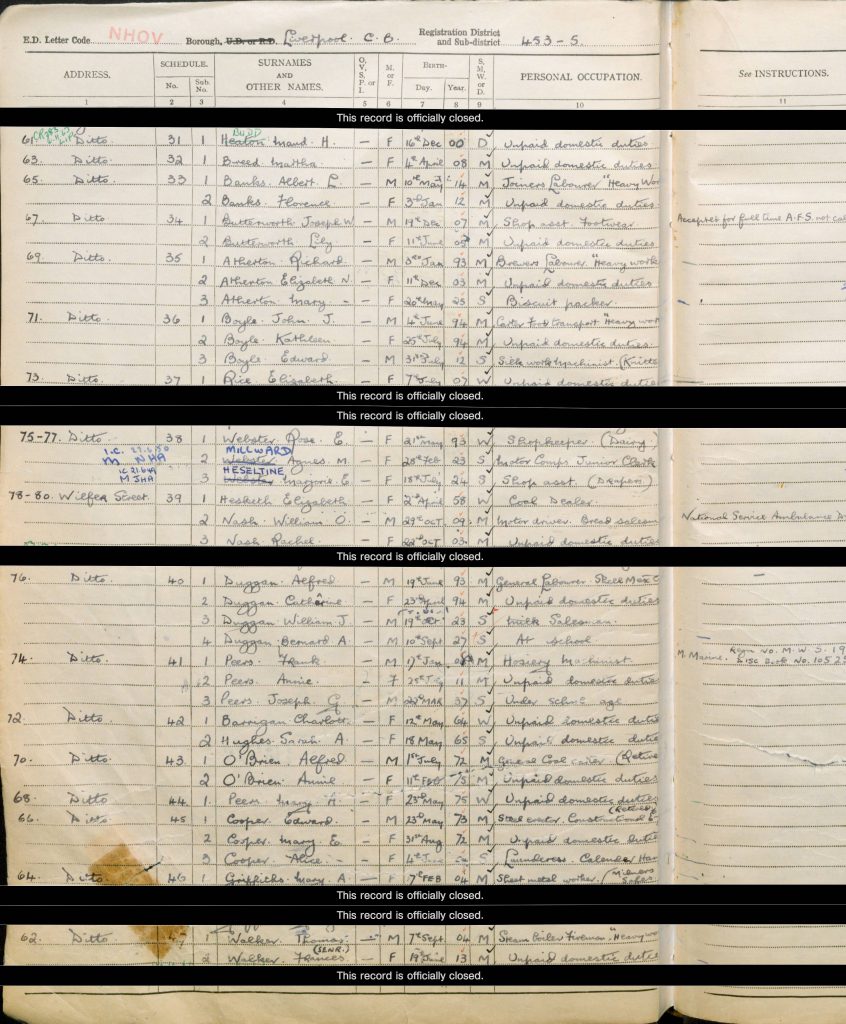 By 1955 when Kelly’s Directory of Liverpool is published, the premises and family are no longer listed so we must assume the dairy has gone out of business.