We’ve already met David Hodgson because our museum manager Fiona went out to see an old milk cooler he owns. He has farmed at Lowlands in Askrigg all his life so we were also keen to record his memories for the project. 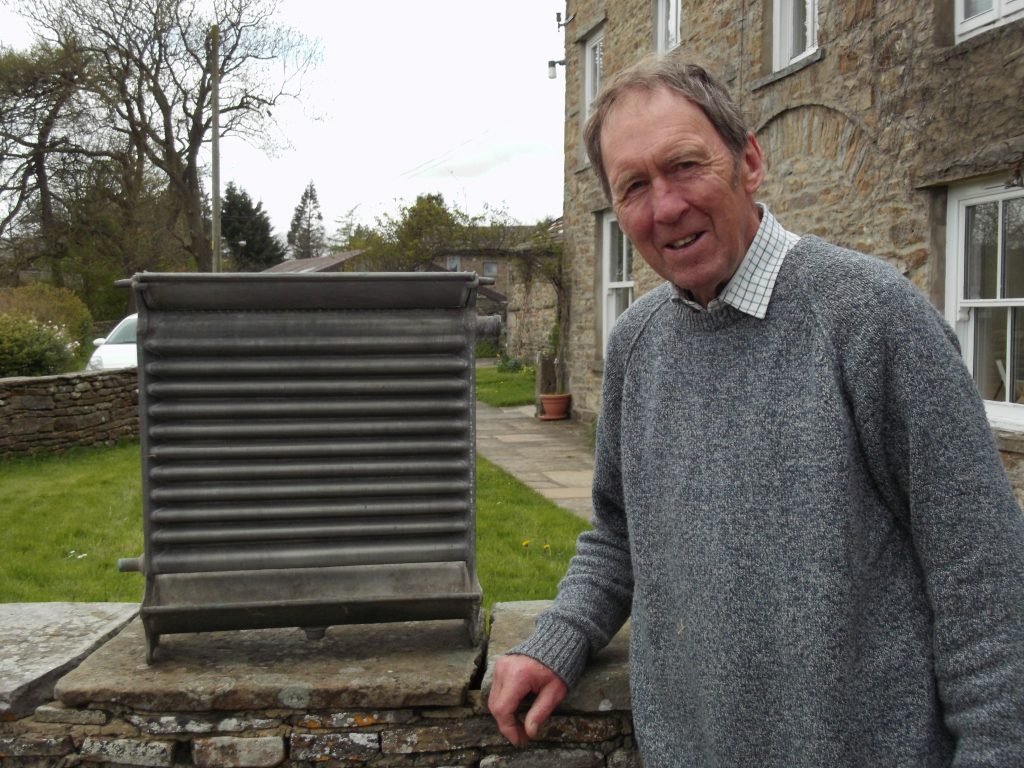 David Hodgson with his milk cooler

Sally Stone visited him in October at the farm in Askrigg. There have been dairy cows and Hodgsons at Lowlands for a long time now:

“…m’dad farmed here and m’grandad before me and son James is now main man on the farm. I’m 70, started farming when m’dad died when I was 21, and at the time we used t’have northern dairy shorthorns and we milked about 16. It was a rented farm, we had four different landlords and through milking more cows at that time, when I started we got up to about 40 cows, we were able t’buy, finished up, we bought all of the landlords out so we now own the farm.”
David Hodgson (70), of Lowlands Farm, Askrigg

So, in those days, dairying was profitable enough for David to be able to buy his farm. They started with northern dairy shorthorns but that gradually changed as time went on as David describes in this audio clip:

Foot and Mouth struck in 2001 and David lost his entire herd:

“…so I lost all that genetic material and although I wasn’t old enough t’retire, I didn’t feel like going back into milk, b’cos I wouldn’t have been milking my cows, because I’d be milking someone else’s cows, so it was a bit traumatic…[the] end of dairying at Lowlands, so we’ve managed with sheep, just with sheep ever since, but we haven’t had t’buy land y’know, we done all that before, and now, t’some extent, the cows are replaced by Texels and Mules [sheep] and we still have Swaledales on the high side land, kept very traditionally.”

“Well, we used t’milk into buckets, still like an engine, vacuum-controlled engine and a pipeline, milked into buckets, which we carried on, oh I don’t know, a couple of years mebbe, and then put a small four/eight abreast parlour in, which was unusual in we put it flat on the floor, rather than most abreast parlours had a step up, but I thought that was unfair on the cows and no benefit t’the man, so I had away with it and we never put a step in, and it was a nice parlour, I enjoyed working in it, cows enjoyed it…[milk] went into a pipeline, straight into a bulk tank…”

His father could milk by hand but David would only ever have to do the odd one or two if the electrics or the Briggs & Stratton engine failed.

He does remember his mother making tasty butter on the farm, but only ‘for fun’:

In the winter time, the cows were housed in the shippon near the farmhouse, whereas the youngstock were kept in the field or ‘out’ barns as he calls them:

“…we always aimed for about 11th November for tying in and middle of May for turning out, so that was the length of winter, that didn’t seem to alter much. I think mebbe winters are milder now than they used t’be, there’s certainly not as much snow as there used t’be or frost which again is a shame. Y’know if there’s a lot of frost y’can get out with muck or feed sheep outside…I can remember once we had t’take milk t’Bainbridge Green in a portable tank, get it sucked up t’go t’the Creamery at Hawes, they couldn’t get on to our side, they’d go up south side but couldn’t  go up on the north side, but that was most unusual and it were only last couple of days.”

The cows were originally fed on hay made from the farm’s meadows but big bale silage revolutionised all that as David describes in the following audio clip:

Although yields from Lowlands’ northern dairy shorthorns may not have been high, the line that the Hodgson’s bred was of good type and has proved to be important for the survival of the breed.

“…the last bull we had was home bred, because northern dairy shorthorns as I said, they were a dying breed and the Rare Breeds Society sponsored us t’take semen from the last bull that we bred which was called Lowlands Sunrise and I could do anything with him. He was up the high side in a 60 acre pasture and the Ministry were coming t’take a blood test, I just walked into the field and put the halter on and held him while they took a blood test, y’know, y’couldn’t do that with many, well, many cows now either, but…he was smasher and he went over t’Wilsons in Lake District, that’s about 1973, something like that.” 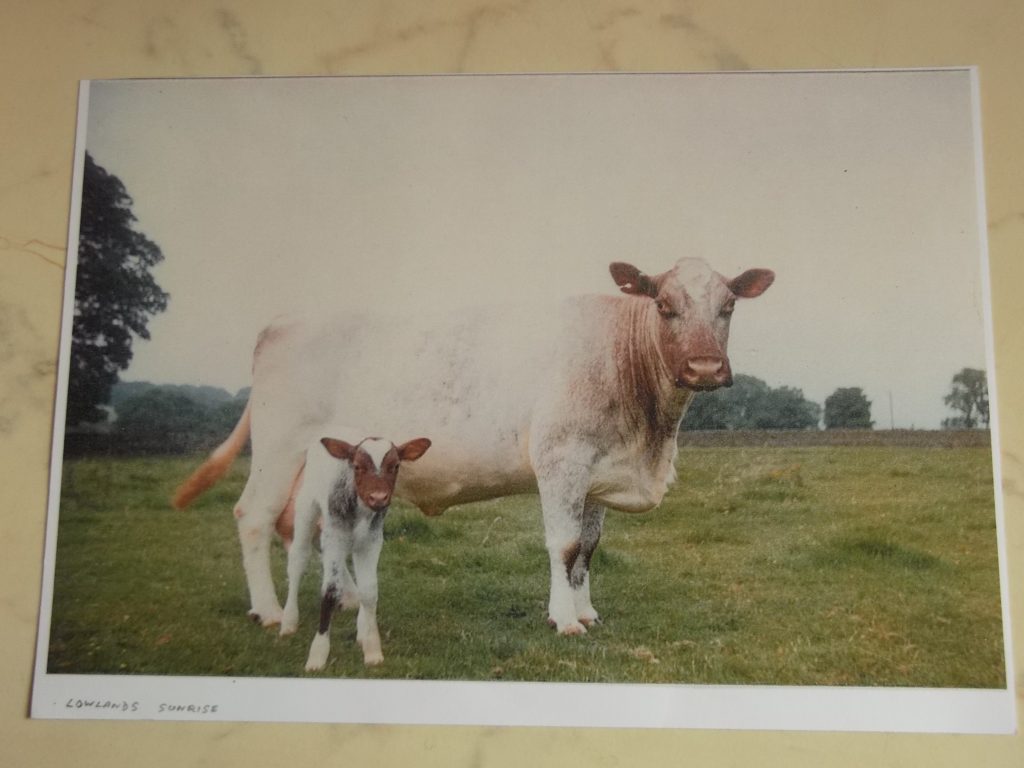 Lowlands Sunrise as a calf. Courtesy of David Hodgson 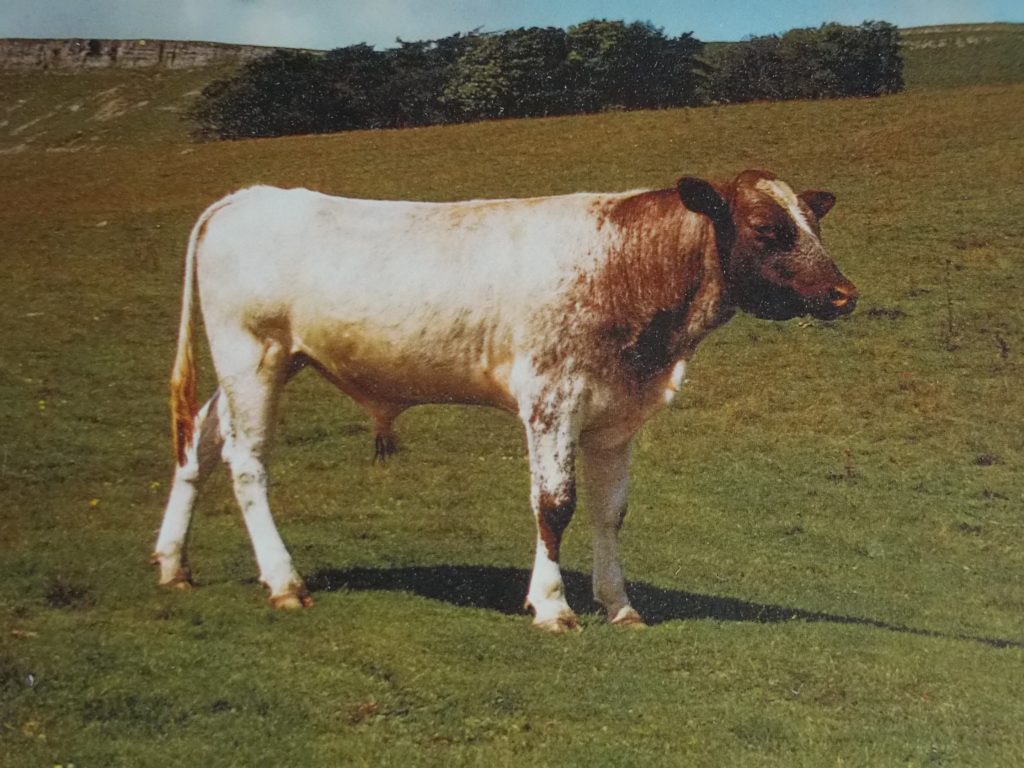 A little bit of research revealed that the RBST still hold Lowland Sunrise semen in their archive and that long after he died, he is still siring animals, like this fine bull whose bloodline is to be found in Andrew Hattan’s herd over in Nidderdale. 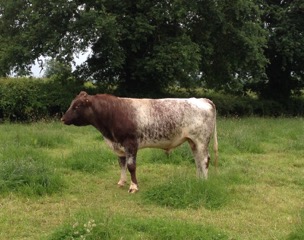 David’s father kept careful milk records which are now in the collection at the Dales Countryside Museum.

“M’dad used t’do National Milk Records when he had pure northern dairy shorthorns, and I gave them t’the museum at Hawes, be fifteen years ago, so they’ll be lodged there and there might be some people interested in looking through it” 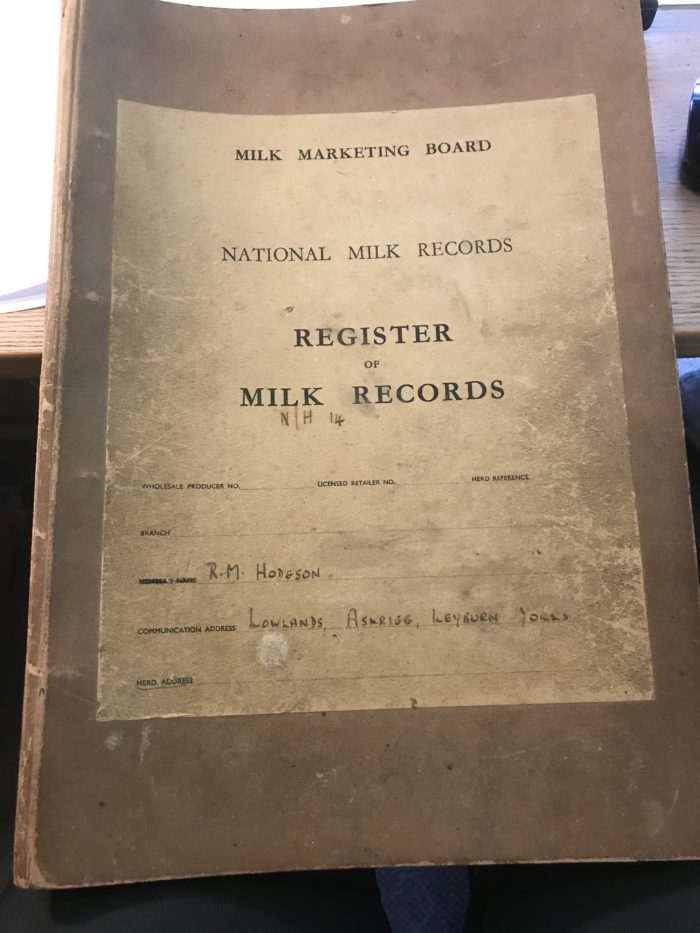 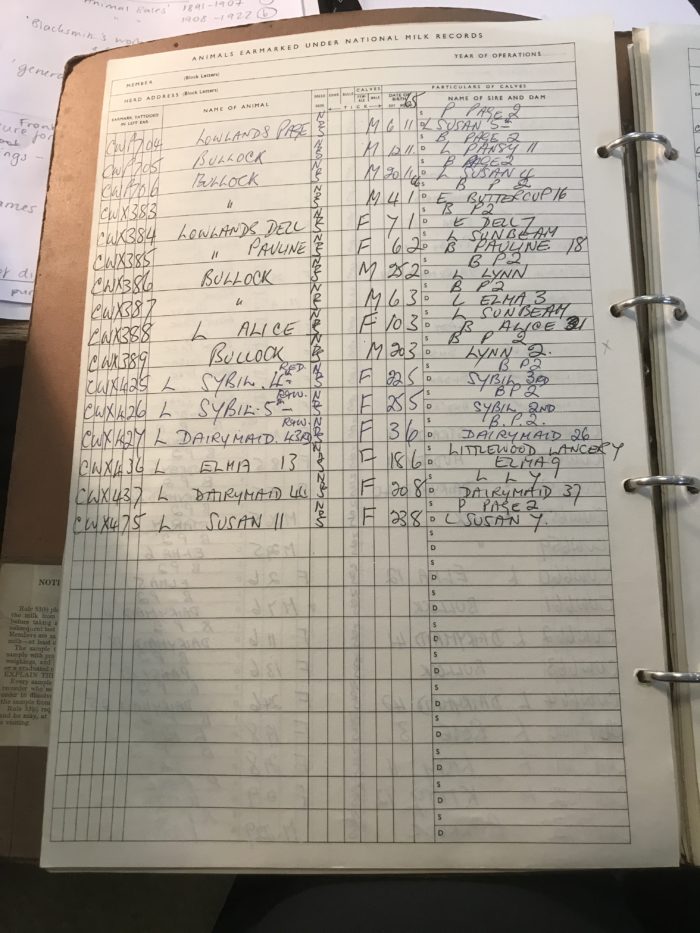 The farm bred up all its replacement dairy cows as well as the occasional bull, but that left most of the bull calves needing to be sold on.

“…bull calves went t’Hawes auction in the cattle trailer, or, traditionally if there were only one or two, used t’put ‘em in a sack with a label round their neck saying where they’d come from. Pop ‘em in the front door of the cattle wagon. Molly Jack’s cattle wagon it would be, I don’t know if anybody else can remember him, and he used t’go t’Hawes like that but the problem with that they made it illegal and we couldn’t do it anymore and geld cows they would nearly all go t’Hawes, Charlie Lancaster would be one of the main buyers, and John Lancaster still going. Any cows that were slow milkers or didn’t like ‘em because they kicked mebbe, we’d sell them as new-calved…at Hawes, that was likeliest place t’go. We did sell calves at Leyburn, but it’s a longer trek and no better trade so I would say we took mostly t’Hawes.”

They borrowed one bull from elsewhere but he turned out to be a bit of a problem as David recalls in the following audio clip:

Another near miss he recalls involved his daughter:

“…daughter Sue had a young pup with her and we were going t’move a heifer that had just calved in field called Horrabank, and I never thought, but the cow took exception to the pup, it hid behind Sue, so the heifer went and clattered into Sue…would’ve knocked her completely over, but I said ‘let go of the dog’ which she did so immediately the threat to the cow had moved from Sue t’the dog, so Sue was OK, but it could’ve been nasty and I’m sure she’ll remember that.”

In spite of such incidents, David seems to miss his dairy cows but recognises how hard it is nowadays to make a profit milking:

“…[milk] would also go t’the Wensleydale Creamery at that stage. I can’t just remember the date…[before that] it went t’Milk Marketing Board, they were taking it, and that was…when y’could make money at milk, with milk, and then Conservative government, for whatever reasons decided they couldn’t have a monopoly, so it went t’Milk Mark for a bit, then we finished going t’the Creamery at Hawes, ‘cos promised t’pay a bonus over anybody else, which they still do, but it’s now such a wafer-thin bonus as t’be negligible. I don’t know how they make money milking cows now, certainly not in our area where the herds are relatively small.” 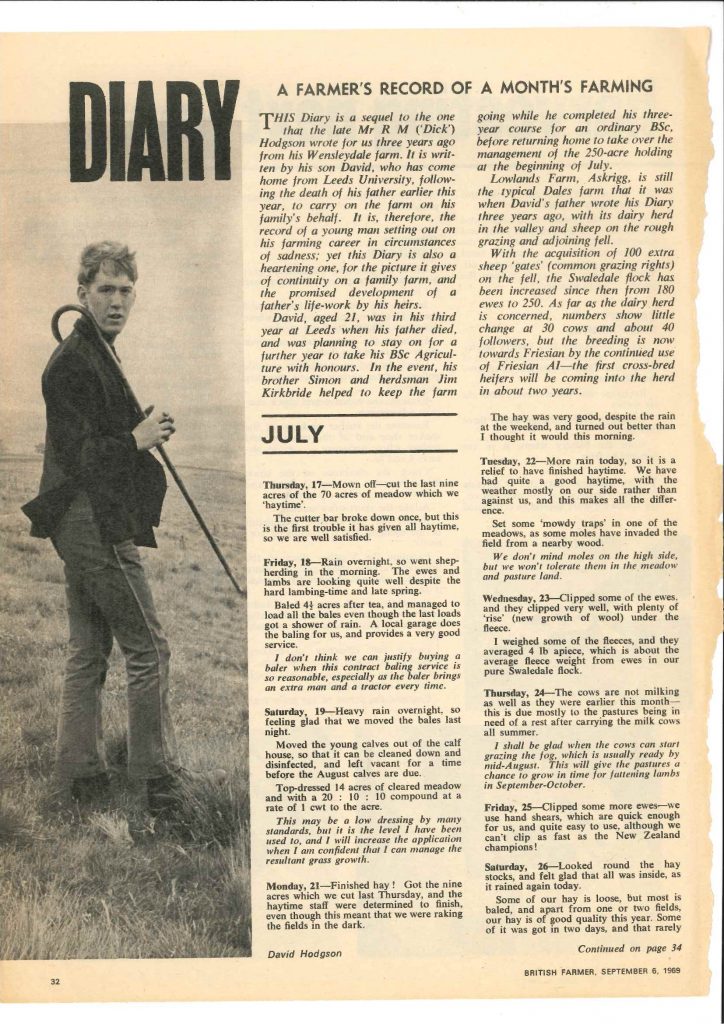 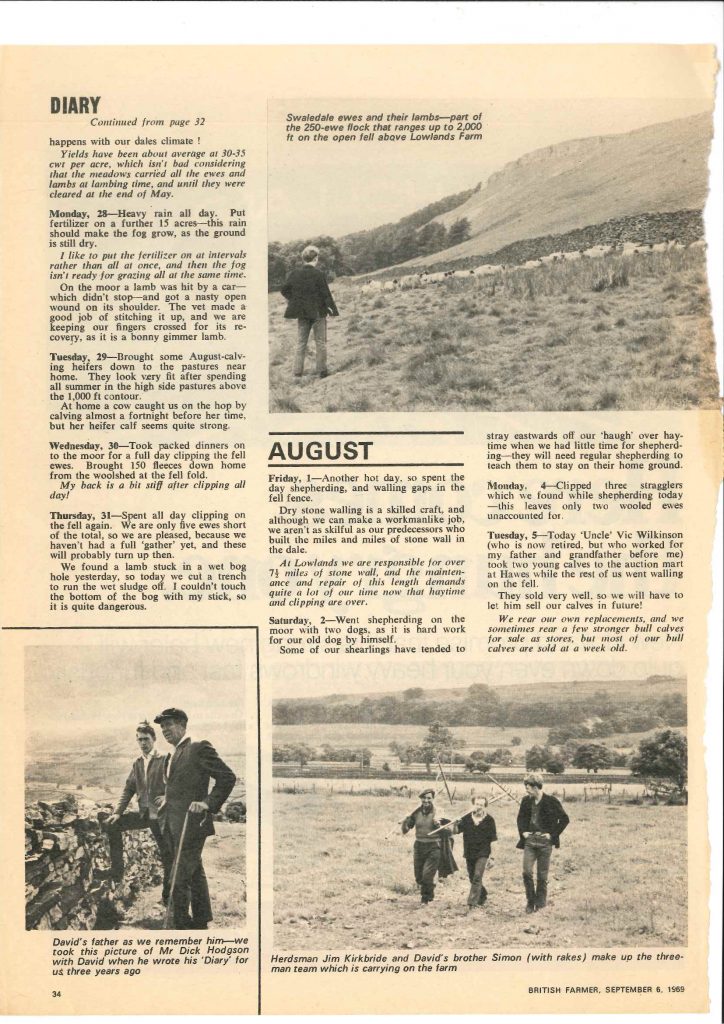 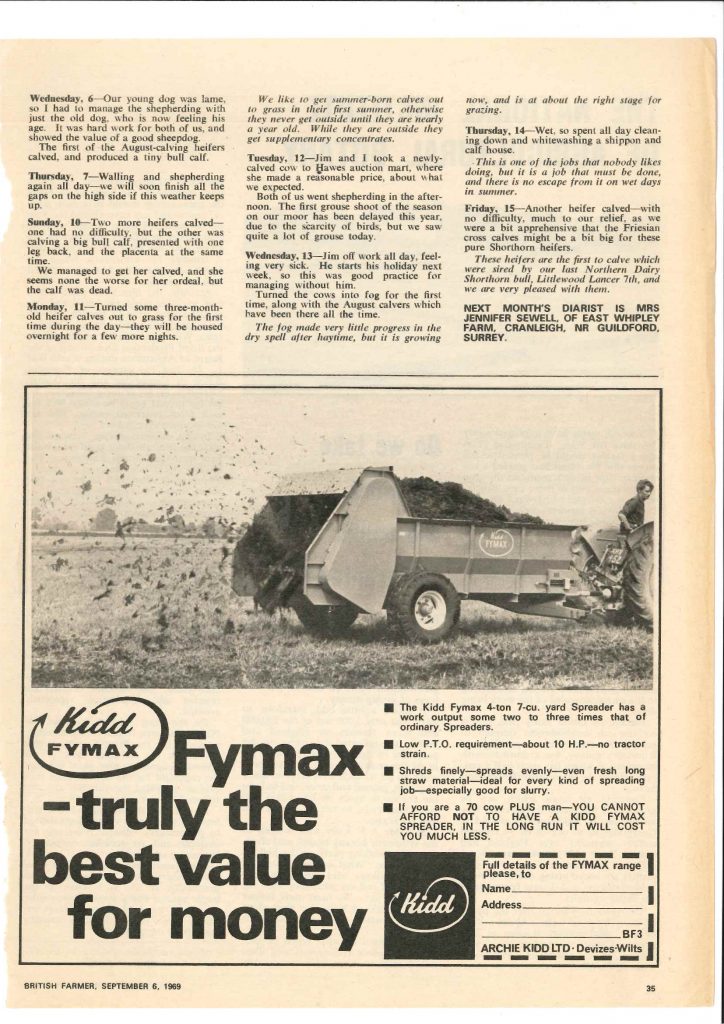