The first oral history interviews conducted by our newly-trained team of volunteers are now being transcribed. The first one to be finished was recorded by Colin Luckett who interviewed farmer Cliff Allen of Scaur Head Farm above Gayle.

Cliff was born in 1953 and came to the farm when he was four years old. It had been bought by his granddad, the son of Elijah Allen of grocery shop fame in Hawes and it had dairy cows on it right up until Cliff gave up milking around twelve years ago. This photo shows his children herding the cows down to be milked sometime in the 1980s. 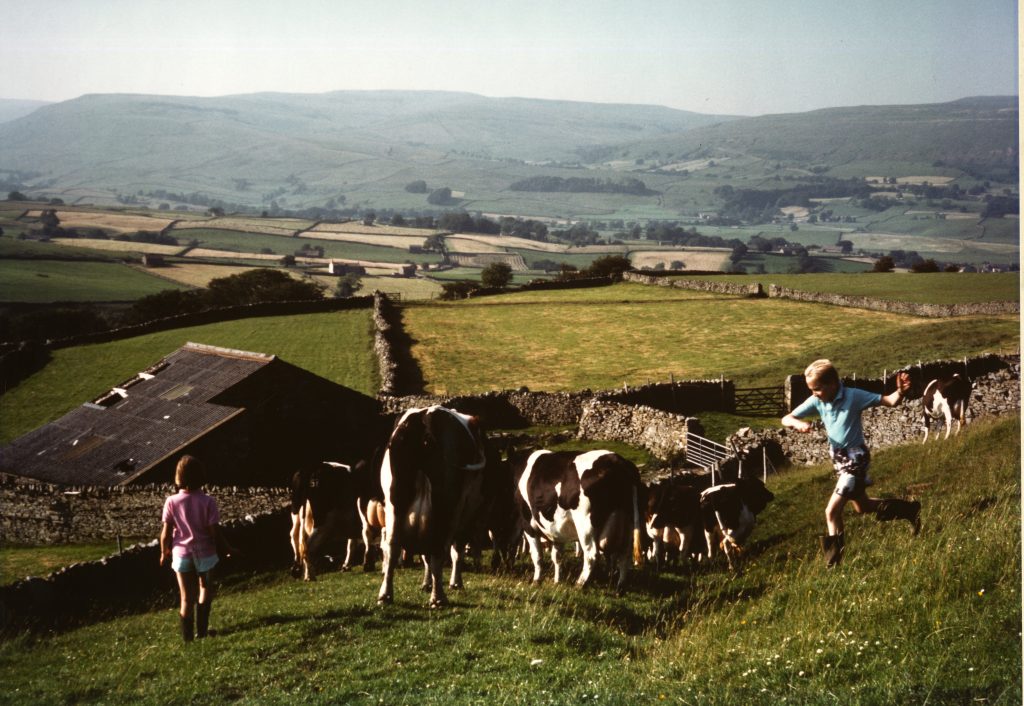 The Allen family children herding their cows down to be milked. Scaur Head Farm, Sleddale. Courtesy of Debbie Allen. Photo by John Forder

In his interview, Cliff describes the way that milking cows has changed radically since his grandfather’s day, both in terms of the facilities and equipment needed and also the breeds of cow.

His grandfather started with northern dairy shorthorns and would have hand-milked. Cliff never hand-milked however, his first memories are of milking in a building just across from the farmhouse using equipment powered by a Lister engine:

“Well, they were brought down every night and every morning and tied up in a building across the way from where I live. Y’know, they’d tie a few up at a time, and milk them by a machine…late 50s…by a machine, I remember, it was like a Lister engine with a pump…it was like a single cylinder engine cooled by water and it ran on petrol, and you started it with a handle and it went ‘dooff dooff dooff’ [imitates sound] the noises like that, like slow revving engine yeah…that machine produced vacuum, that went along steel lines into the shed, and you’d plug the units into the vacuum, which filled the bucket up with vacuum, and worked the units, y’know, they had a pulsator on the top of the units and y’worked the milking..how they milk…I think they would probably have two or three units, yeah, so they milked two or three cows at one time, so it was quite a streamlined carry-on really for them.”
Cliff Allen (63) of Scaur Head Farm, Gayle 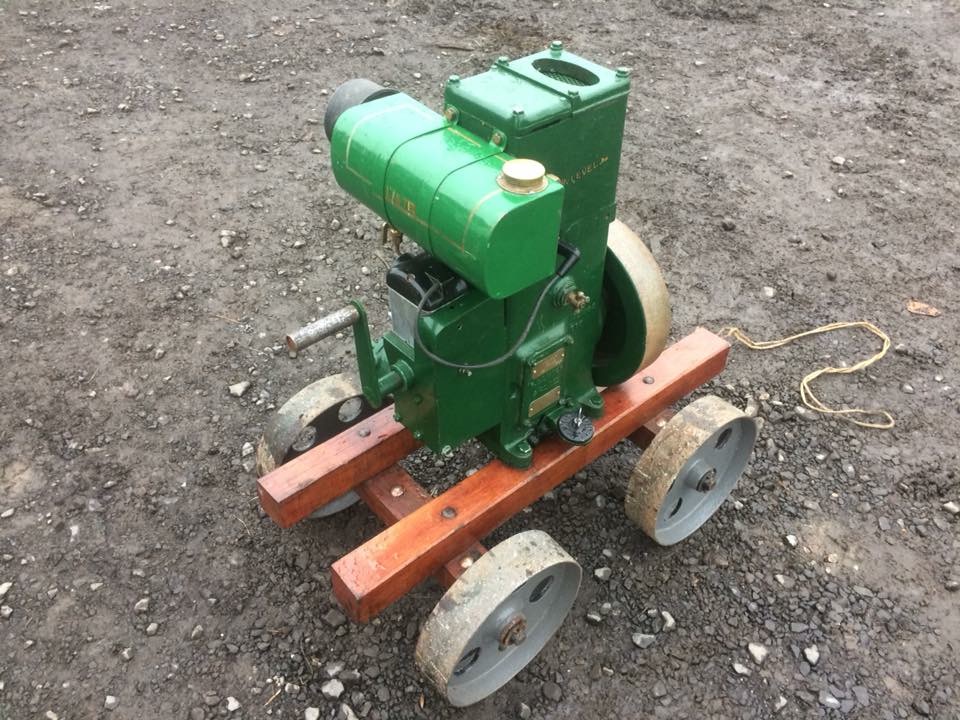 Listen to Cliff talking about the early days at Scaur Head Farm with Colin Luckett:

He goes on to describe how the piping and milking units were sterilized using a coal-fired steam chest. In this photograph from a book lent to us by Cliff, the use of steam to sterilise milking equipment is shown bottom right. 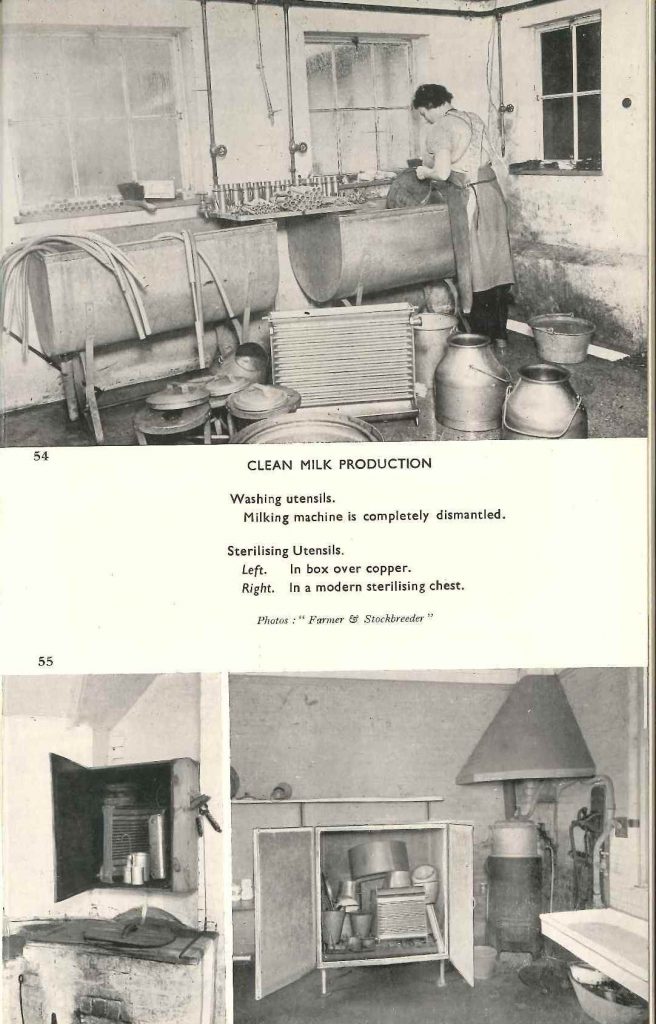 In the early 1960s, they built a large shed away from the farm with the milking machinery in it, powered by electricity. He describes one of his first jobs on the farm in that shed:

“I remember when I used t’go t’school in Hawes, when I walked back up from school, well, I must have been about eight or nine, I used t’have t’muck th’cows out on m’way back home from school, so they could start milking…that was m’first job [laughs] get the muck out and chuck it into th’muck spreader. That was when I was at Primary School, y’wouldn’t get any kids doing that today would you? Learned me how t’use the shovel.”

While his grandfather milked around 20 cows, by the early 1960s the farm was milking up to around 50. They produced 15 to 18 ‘kits’ or churns full of milk to be put out on the roadside churnstand awaiting collection by the milk lorry each day. 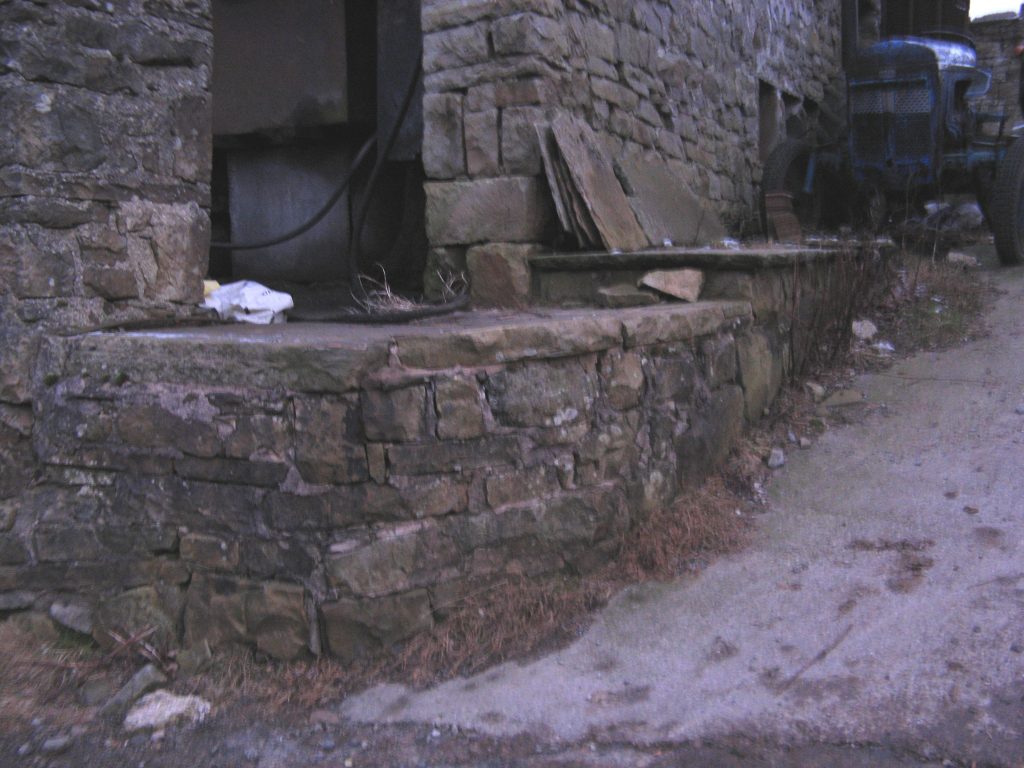 “Well they stopped with the milk lorry and it went into tankers, that would be in the late 60s or 70s I can’t just remember the time…I remember tipping it into the bulk tank, so we got the bulk tank first and we tipped the milk into it, carried it through and tipped it in, into the bulk tank. That was before we put the parlour in, we had a parlour after that, which put it in automatically… How many years [tipping it in]? Well I did it all through my teenage years and I think it would be probably when I was about 20 or 22 that we put a parlour in…We used t’milk the cows with units, I think we had four units then, or maybe five milking units and we used t’milk the cows when they were tied up and the milk kit was probably in the middle, behind the cows and we poured it into the kits and then wheeled the kits through into the Fridge House. Have y’ever wheeled a kit? [Laughs]. They’re quite good t’do, y’can just spin ‘em with one hand.” ibid 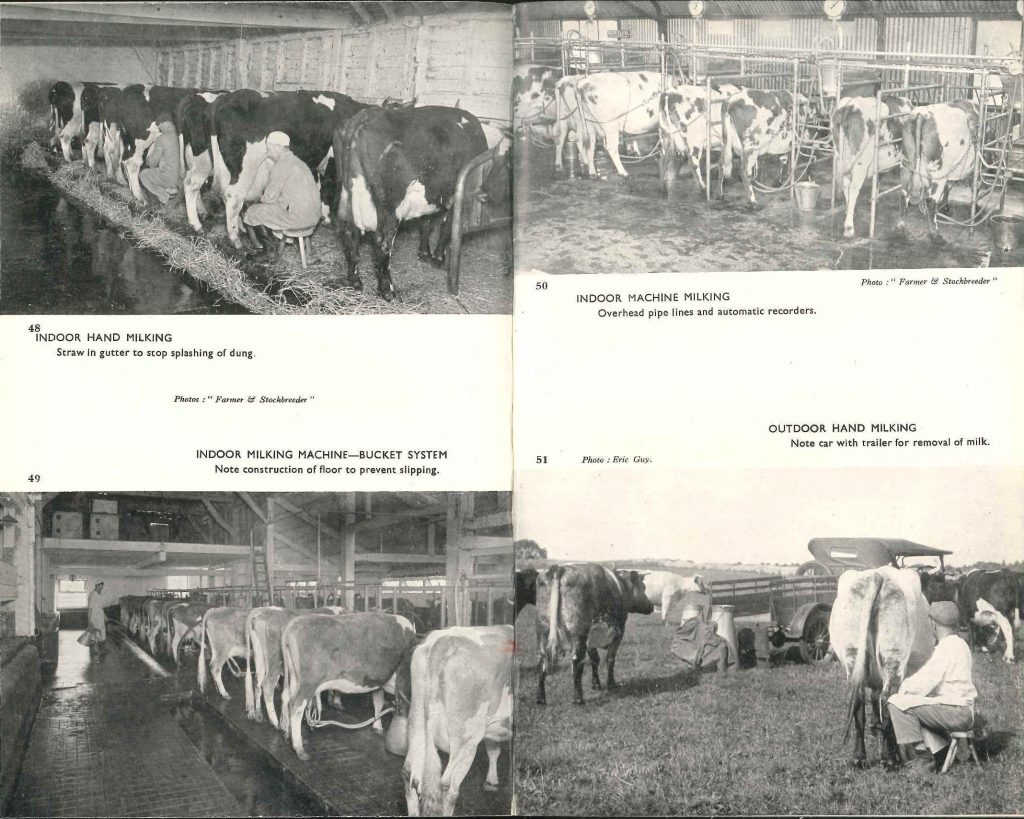 In the mid-1970s they bought a herringbone-style milking parlour and had that installed in the big cow shed.

“Well it was the way forward y’know, things were going forward weren’t they and the herringbone parlour fit in well with cubicles, y’know, the cow, y’didn’t have to tie the cows up, they just went into a cubicle and sat in cubicle, and you scraped them out with a tractor it was all a lot easier.” ibid 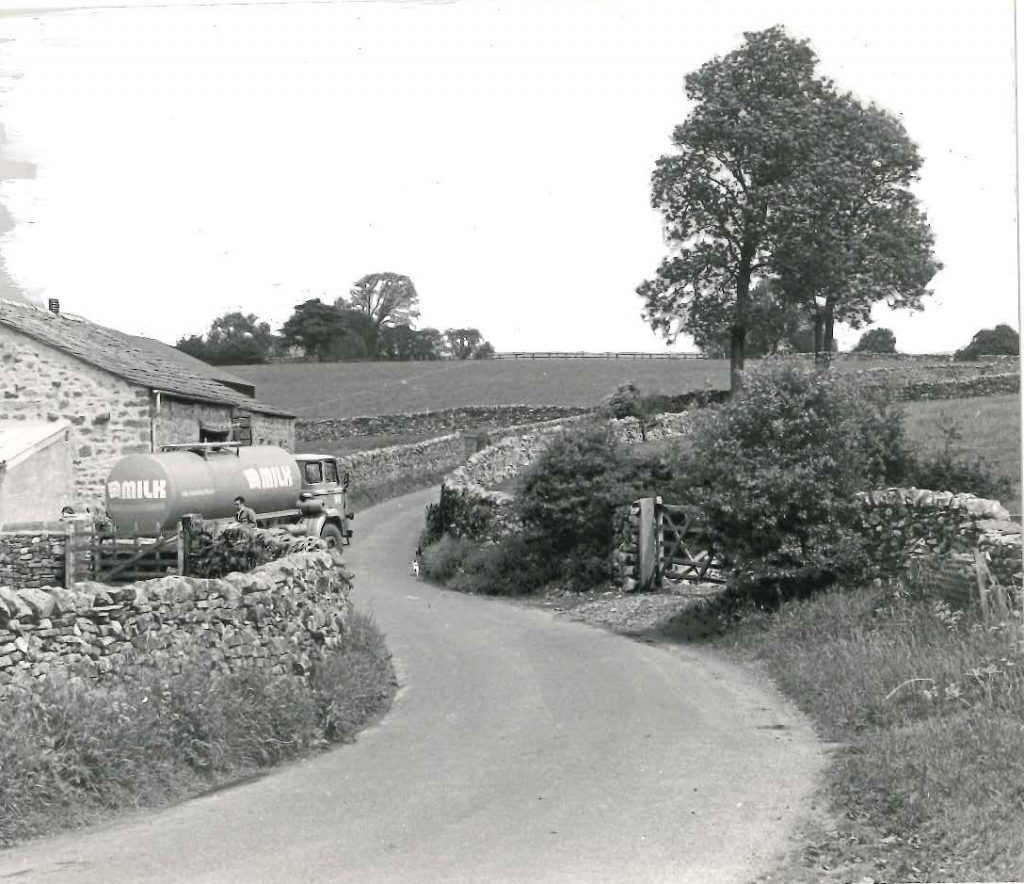 Just as the methods of milking and collecting milk modernised, so did the types of cow used. Cliff describes the changeover from black and white Friesian cows he started with, to the much larger Holsteins:

“And then we milked through the parlour for a lot of years and the biggest development was, I’m sure it was, was when the Holsteins came. We bought Holstein semen, off the AI, famous bull called Hannoverhill Starbuck, he was one of the best ones. They were all recorded y’know. And we crossed them with the Friesians that we used t’have and y’know, the milk increased just dramatically after the Holsteins came…That would be in the 80s, yeah, late 70s/80s, yeah, which are the big ones, that look like hat racks y’know, and they stand, y’know, have a job t’look over the top of them haven’t you. They’re just a different animal altogether.” ibid

The Holstein sire Cliff mentions called Hannoverhill Starbuck turned out to have been Canadian and one of the most prolific bulls ever bred. But inspite of all the innovation, eventually Cliff saw the writing on the wall. With milk prices so low it wasn’t profitable to milk cows any more on such a small scale and so, around 2006, he converted over to farming suckler cows, raising calves to sell on for beef.

“Well I can understand what’s happened…the biggest thing about the milking industry is the Holstein cow…it’s an amazing animal, it’ll produce 10,000 litres easy, maybe 12,000 litres in a year, whereas a, the old type Friesian cow would give half that amount and so…but it’s sort of white water really, it’s not milk, it’s like just [laughs] what we’ll call white water. But that has been the big game changer I think and people have realised that if you can keep a hundred of those, y’can knock a lot of milk out y’see, can’t you? But y’need a hundred or two hundred or five hundred, y’know, some people have huge amounts of them, don’t they? And they knock out huge amounts of milk, but it’s put the little man out of business hasn’t it?” ibid

UPDATE May 2019 Since telling us his memories of growing up on the family farm, Cliff Allen has sadly passed away