The Roman Milestone at Middleton is cylindrical in shape, approximately 1.7m high and 0.45m in diameter. The East side has an inscription: “MP LIII” – Milia Passuum 53. It is believed to refer to 53 miles from Carlisle. Below this there is another inscription: “SOLO ERVTVM RESTITVIT GVL MOORE AN MDCCCXXXVI” – added by the historian Dr Lingard to commemorate its discovery and re-erection by W. Moore. It is believed that Moore found the milestone when ploughing his land in 1836. It was then relocated to the top of a nearby hill and this inscription was added. There are some diagonal scratch marks on the northwest facing side which were likely made by ploughing.
Roman milestones were generally stone pillars with Latin inscriptions erected when a road was first constructed or when it was repaired. The inscriptions usually give the distance to the next, named, town, as well as the name of the reigning emperor and the particular year of his reign in which the milestone was placed, which allows them to be accurately dated. This milestone is unusual as it does not record the full name and titles of the emperor who built or repaired the road.

However, the milestone is thought to have been built around 79AD. The milestone featured along what was a major trunk road that ran from Ribchester to Carlisle [the Roman “main road”]. Some parts of this road survive under modern roads like the A683, while other parts are visible as earthworks. The Roman road network was extensive in England, serving military and economic needs. Although many examples survive in museums, there are few milestones in their original locations. Therefore surviving examples are considered to be of national importance. The Roman Milestone at Middleton is Grade II* listed and is designated as a Scheduled Ancient Monument. 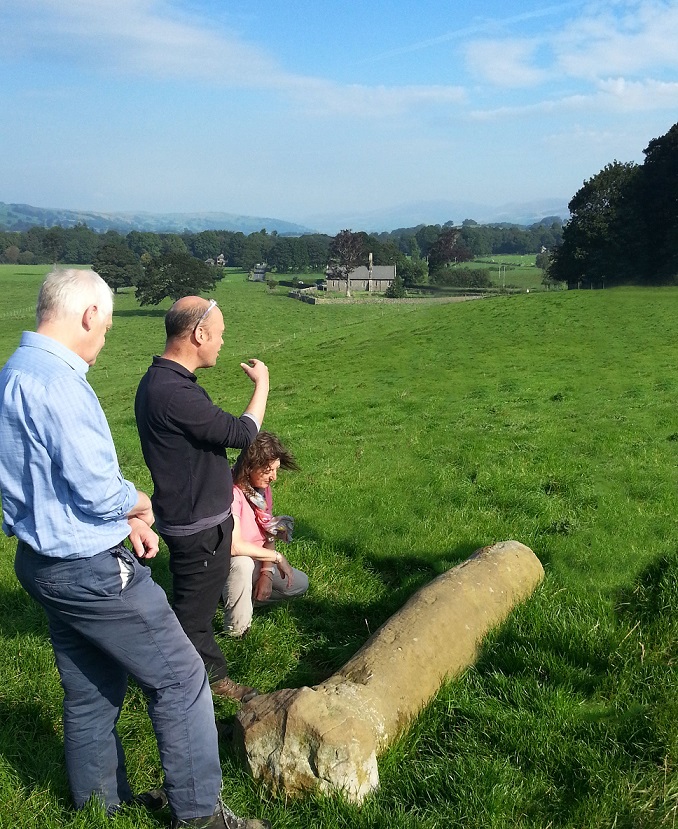 The milestone before it was relocated to the churchyard

The milestone had fallen over in the field where it had been moved to in the nineteenth century. Due to its condition it was on Historic England’s At Risk register. As a result it was moved again, to the churchyard of the Church of the Holy Ghost, Middleton, on 28 October 2016. This improved public access to the milestone as well as improving its protection, as it is now in a better setting for management.
You can find out more about the relocation by looking at this press release: http://www.yorkshiredales.org.uk/living-and-working/other-services/press-office/news/recent/new-home-for-lost-treasure-from-the-roman-m6
A short video was also made of the relocation:
[youtube https://www.youtube.com/watch?v=sMcIjmvd6Jo]
The Church of the Holy Ghost [MYD62969] was built between 1878 and 1879. There has been a church on this site since 1634, however when it was replaced it was completely rebuilt from the foundations up. It is a Grade II listed building.

Historic Environment Record: MYD63132
Parish: Middleton
OS Grid Reference: SD622860
Dale: Lunesdale
Access: The Roman Milestone is currently in the Churchyard of the Church of the Holy Ghost, Middleton. There is some parking at the church. Public Rights of Way also take you past the Church. Please be respectful as it this is still a place of worship. The Church is also usually open in daylight hours.