Historic Environment Record: MYD49907
Parish: Linton
OS Grid Reference: SE00256275
Dale: Lower Wharfedale
Access: Not on open access land, it is private property. The site is visible from a number of public rights of way that are close by. It is also visible from locations on the B6160 and the B6265, however, please note that the roads are narrow so it is not possible to stop.

A residential camp near the village of Linton survives virtually intact. The buildings were constructed out of timber frames with horizontal timber cladding, beneath overhanging cedar shingle roofs. A number of them have brick chimney stacks. The frames and floor joists rest on brick and concrete piers. However, the remaining buildings are in varying condition, and the site is rapidly deteriorating. A fair amount of the cladding has been damaged or removed, most glass is missing from the windows, and the cedar shingle roofs are in poor condition with a lot of the shingles missing or rotting. 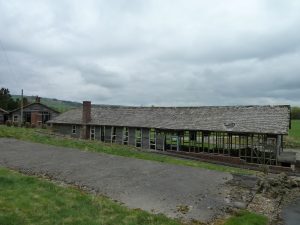 The site includes many buildings and features. There are a number of single-storey classrooms/dormitories that remain, as well as a larger building that would have been a canteen, and is now greatly deteriorated. There was an outdoor swimming pool, which has since been filled with rubble. An in-filled air raid shelter can be seen as an earthwork and the entrance by the survival of the top of the stairs that would have led down into the shelter. (It is possible that remains of the air raid shelter would remain in situ.)  Originally, there would also have been shower blocks, a greenhouse, a headmaster’s house, a central boiler house, and a water tower. A former playing field occupies the eastern part of the site.
Linton Camp is one of a series of Camp Schools built by the National Camps Corporation in 1939 to house evacuees. In this case to house evacuees from Bradford and Leeds, originally whose fathers were away in the forces and whose mothers were often doing shift work in the mills or munitions factories.
The National Camps Corporation constructed around 31 camps in rural locations around England to house evacuees from nearby cities. The architect T. S. Tait was responsible for the design of the buildings. The schools were constructed of timber chalet buildings of a standard design, chosen for its economy and camouflage capabilities. Some of these camps have been demolished, some have been repurposed into things such as caravan sites and outdoor learning centres, and some have fallen into disrepair (like Linton). 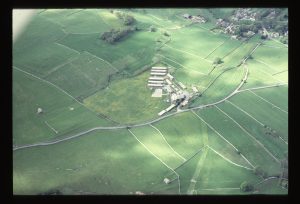 Following the war the camp was used to provide residential education in a healthy environment for inner city children by the National Camps Corporation. The camp would therefore have played a significant role in introducing inner city children to the landscape of the Yorkshire Dales. In 1946 the National Camps Corporation was wound down. However, the camp was purchased in 1957 by Bradford Metropolitan Council, and continued as a residential school until its closure in May 1986. It was then periodically used as a summer camp for scout groups. It has been unused for many years now.

The land to the south of the site contains archaeological remains of a medieval settlement. The settlement likely contained several buildings, possibly including one long house, as well as around 20 small folds and paddocks, and a medieval quarry. The settlement and the remains of medieval field systems are visible as earthworks. This is designated as a Scheduled Ancient Monument. [Historic Environment Record: MYD57541 and MYD36675] 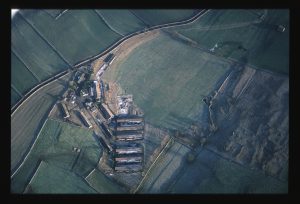