Getting to the bottom of it

Earlier this month Dr David Johnson led a community excavation with a group of volunteers, many of whom are members of Ingleborough Archaeology Group. They were investigating a likely early medieval site at Clapham Bottoms. I was lucky enough to visit the site on one of the days and get involved.

We parked and met in Clapham Village. The village itself is a Conservation Area. It was originally an Anglian settlement and its early importance is indicated by the granting of a market in 1201. It is essentially a street village (most of the village is found along the watercourse) and boasts some really lovely vernacular buildings. We departed the village in a 4×4 up to Ingleborough Cave. We then walked about 1km up to the site. 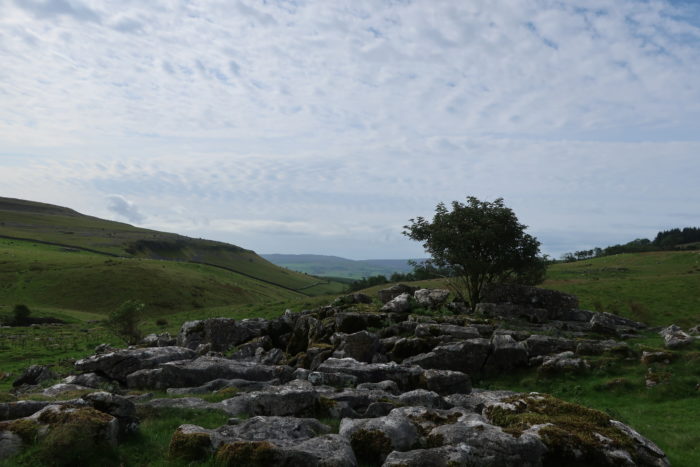 Over 15 volunteers were able to dig in this stunning location

One of the reasons why this site was chosen (and why we were all there) was to further explore its similarity to many other sites in the Ingleborough area. “Over the past decade or so, about 35 early medieval buildings have been examined in detail around Ingleborough, either by excavation or from earthworks”, David Johnson explained.

The site at Clapham Bottoms consists of two adjacent rectangular buildings, each with a curving bank enclosing a small paddock or garden. The site was first surveyed by a small group of volunteers back in 2008 – they undertook a tape and offset survey. Attention returned to the site for a larger project this year, with a geophysical survey in June and a two-week excavation in August/September.

It was surveyed using both Magnetometry and Resistivity. Magnetometry is a surveying technique that measures and maps patterns of magnetism in the soil. It particularly detects soil changes, and shows indications of any burnt material. Resistivity is used in order to measure subsurface features. Man-made features, such as remains of buildings, below the surface can be recorded, even if naked to the human eye, due to its detection through its resistance.

Four trenches were then excavated – they were opened to answer a number of questions. This included whether the quality of the walling was the same throughout the site; to see whether the corner of the walls fits the model from most of the other dated early medieval sites; as well as to look for an occupation surface. 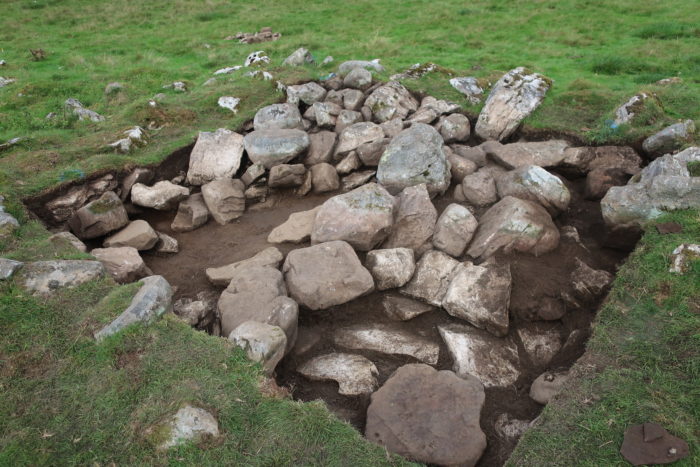 This trench was exploring one of the walled ‘alcoves’

“The larger building in Clapham Bottoms has two small walled ‘alcoves’, one at each end, which makes it unique in the area. It also has a discontinuous line of paving slabs running the full length down the middle of the building, which has also not been seen before. Only one of the other 35 buildings had an internal division and that was a straight two-celled building.” (David Johnson)

The final trench was located to explore the surrounding enclosures, and was positioned over what looked like an entrance. This was to find out whether it was an entrance and how the stone bank was built.

One of the main aims of the project was to be able to date the site – to do this, volunteers were looking for fragments of charcoal. About 50 charcoal samples were logged across both buildings so there is every chance of securing radiocarbon dates for the site.  [Radiocarbon dating is a method for determining the age of an object containing organic material by using the properties of radiocarbon, a radioactive isotope of carbon. The method was developed in the late 1940s. It is used in dating items such as bone, cloth, wood and plant fibres – items linked with human activity.] 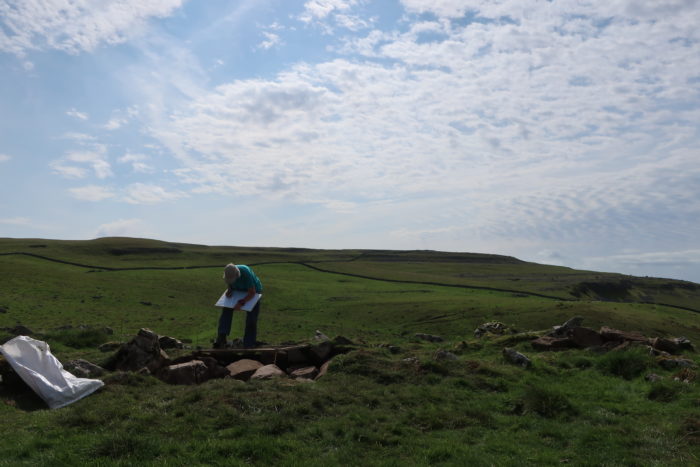 We are looking forward to hearing the final results, if nothing else because the excavation leader said that “if it doesn’t prove to be Anglo-Saxon I will eat my trowel”.