Get on the Trail! New family cycle route launched

The final touches have gone in to finish the Swale Trail – our new 12 mile (20km) cycle route along the length of Swaledale – in preparation for its official launch yesterday (Sunday 29 April).
Around 50 invited guests helped us cut the ribbon, including Reeth and Gunnerside School staff and pupils, local businesses, contractors, and the volunteers who worked on it – as well as a group of children who cycled part of the Trail to get there.
Rangers and contractors have been playing catch up after the delays caused by the seemingly never-ending winter. But now the final few pieces have been fettled. 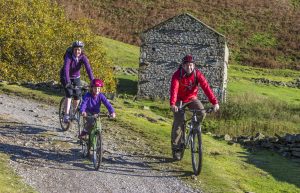 The Swale Trail will be unique in the National Park as a route firmly aimed at aspiring young mountain bikers and their families.
The trail is a mix of high quality unsurfaced tracks and very quiet sections of road which link together to give a route all the way from Reeth to Keld.
Completed sections have already been proving popular, not just with people on two wheels, but with families out for a stroll and people using powered wheelchairs. That’s why you will see ‘Share with Care’ signs along the route – to be mindful of all users, however they choose to use it.
It has been a longheld ambition in the National Park to have an easier route for cyclists to complement the fantastic array of tough routes that are available for enthusiastic riders. Out of this ambition the potential for the Swale Trail was identified, but it has been a long road to get to the stage of opening it. 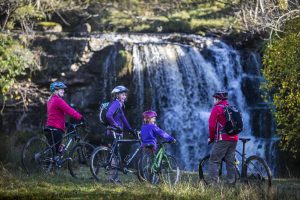 We needed to talk to local people to see what they thought about it, carry out consultations to ensure wildlife and heritage features were safeguarded, and commission an economic appraisal of the potential benefits to the area.
Then there was the legal work to divert a section of the route that had fallen into the river on to a new line, a Habitats Regulation Assessment screening report, and specifications for the construction works to be drawn up.
All of that work needed to happen before we could even look for the money to make the Swale Trail into a reality. Fortunately, others shared our vision and significant funding from Richmondshire District Council and Yorkshire Dales LEADER, combined with our own funds, enabled the construction works to start.
It all got off to such a great start last summer. Then the winter arrived – initially wet, then snowy, then wet, then snowy – and on it went! 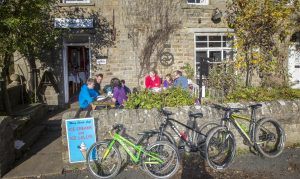 Don’t miss the chance to refuel with a cup of Yorkshire tea and a slice of cake!

For a while it seemed we would never be able to get back on site to carry out the last sections of work, but finally things started improving in April and the major push to get finished began.
Now, we are thrilled to officially launch this fantastic new route, and look forward to promoting it – and, most of all, getting people out there enjoying it.

Find out more about the Swale Trail by visiting our new look ‘Cycle the Dales’ website at www.cyclethedales.org.uk/swaletrail
The redesigned website features brand new content for mountain bikers and road cyclists, with plenty of common sense advice, whether you are having your first taster or like to burn up the miles.

One of the less known things about Swaledale is that it was once settled by the Vikings, with many of the place names in the valley having Viking origins. If you want to find out what those meanings were you will have to take on the Viking Challenge! Assume the role of a Viking adventurer as you follow the Swale Trail and clues along the way. Download our leaflet from the website.

Mark is our Head of Access & Engagement and resident cycling enthusiast

Mark is our Head of Access & Engagement and resident cycling enthusiast