Following the work of our building conservation officers

As the National Park Authority’s Member Champion for Cultural Heritage, part of my role is to follow that area of work – so that I can understand the issues and challenges it presents and influence the National Park’s policies and approach accordingly.  Archaeology, building conservation and historic landscape features all fall within the cultural heritage remit.

Nonetheless, the building conservation team is very small, comprising just one role split between two officers. Each spends part of their time planning and overseeing repair and restoration of key listed buildings and other historic structures such as traditional farm buildings, and part of their time working within the development management team to guide development towards finding viable new uses for these buildings whilst retaining the most important elements of their character.  Much of the development management work relates to barn conversions.

The built heritage of the National Park is very special, including the remains of rural industries such as lead mining and lime extraction, as well as fine structures such as Bolton Abbey and Pendragon Castle.  There are more than 2,000 listed buildings – 77 of which are currently considered to be ‘at risk’ – and a rich heritage of unlisted, but highly distinctive, stone-built traditional farm buildings. Historic field barns and their associated field patterns form unique historic landscape features and have come to be seen as an emblem of the Yorkshire Dales.

This May, I decided to have a close look at the work of our building conservation officers by joining them on a tour around Swaledale and Ribblehead. One of the most inspiring aspects of the day was the opportunity to also meet building conservation staff from Historic England and other UK national parks, exchanging information, experience and ideas as part of an annual meeting, which was hosted this year by the Yorkshire Dales National Park Authority.

Our first site visit was to Grinton lead smelt mill, a scheduled monument including three listed buildings, and one of the best preserved examples of its kind in Swaledale.  This is a site that the National Park has been involved with for many years.  Recent work to prepare the main building for a wedding has revealed the stone-flagged floor for the first time, but has also highlighted the fact that the listed stone culvert, which carries a stream past the mill building, is at risk of collapse, potentially flooding and damaging the mill itself.  Urgent remedial works are needed.

Later in the morning, we visited Reeth where local historians Alan and Judith Mills discussed the early origins of the town and then showed us around the former work- and poor-house area. Afterwards, we drove to Birks End House on the dale side opposite Low Row, a rare and unusually late (c.1730-40) example of a heather-thatched house which, again unusually, had not later been raised and stone slated, probably because of early abandonment. The cruck-framed heather-thatched building tradition lasted longer in Swaledale than in other parts of the Dales due to the area’s relative poverty and isolation.  Although now a ruin, the building’s steep gables (which were required for the thatch roof so that it can shed off water quickly) form a landmark in an elevated location, and listing is being sought to help ensure that the ruins can be stabilised and conserved.

From this site we also viewed the Swaledale and Arkengarthdale Barns & Walls Conservation Area – the largest conservation area in the country – which is ‘at risk’ as most of the field barns (cowhouses) are no longer in agricultural use and are left to decline.  This is one of the biggest and most intractable conservation issues facing the National Park today.  Significant funding is needed to repair, restore and – where appropriate – find adaptive new uses for these barns to ensure their survival.  To secure such funding by 2022 is identified as an important but ‘very challenging’ objective of the National Park Management Plan.

In the afternoon, we met up with archaeologist Dr David Johnson to visit the abandoned settlement of Thorns near Ribblehead. This is accessed by walking along an ancient routeway and across a listed packhorse bridge – grassed, with no parapets!  Arching high above a limestone gorge, this bridge recently required re-pointing the mortar joints and placing turf across its eroded surface track – a difficult and potentially dangerous task that had to be undertaken by a specialist contractor, roped up for safety.

We then arrived at the small deserted hamlet of Thorns, established in the 12th century and abandoned in the late 19th century, and set in an open drumlin landscape, marked by a group of ancient trees. The surrounding network of earthworks, walled fields and tracks, as well as the remains of houses, barns and the communal privy, have all been surveyed – and some of them consolidated – as part of the Ingleborough Dales Landscape Partnership ‘Stories in Stone’ project, which was led by Dr Johnson.  The settlement has a haunting sense of the past.

A large ‘bank’ barn survives – that is, a barn which is partially ‘dug’ into the ground, with the ground floor accessed from the front and first floor accessed from the rear. This is a building type that is usually not found in this part of the country, but common in Cumbria, with a few examples in Wensleydale and Swaledale. It could still fulfill a useful agricultural purpose, but its roof is in a perilous state.

Our final stop was Ribblehead, where we discussed the Settle-Carlisle Conservation Area, the longest conservation area in the country. We looked at the typical Midland Railway station architecture, the impressive Grade II* listed viaduct with its 24 arches, and the construction (navvy) camps of which only a few traces can now be seen.

Of course, all the sites that we visited were just part of our building conservation officers’ role.  As a member of the National Park Authority’s Planning Committee,  I am already very familiar with their input to the development management process, where they work ‘behind the scenes’ to ensure that planning applications for listed buildings and traditional farm buildings respect and enhance historic character. Their in-depth knowledge and understanding of local buildings’ history, evolution, and suitability for new uses is fed through to applicants and their agents, and often contributes very positively to the emergence of high-quality design.

So a fitting close to the field trip day was to find out that a recent planning application which our officers put a great deal of time into – the conversion of the Grade I listed Tithe Barn at Bolton Abbey to a wedding venue – had won a RIBA regional award.  The judges’ comments refer to the way in which the scheme has restored and exposed the scale and simplicity of the original building, removed 20th century additions cluttering the interior, and sympathetically accommodated essential changes.

All in a day’s work? 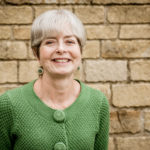 Julie Martin has been a Member of the Yorkshire Dales National Park Authority since 2014, and is Member Champion for Cultural Heritage,

Julie Martin has been a Member of the Yorkshire Dales National Park Authority since 2014, and is Member Champion for Cultural Heritage,