We found ourselves in Burtersett yesterday – looking for clues about the village’s dairying heritage. We already know from its ‘-sett’ name that it probably started life in Viking times as a temporary settlement among valley-side summer grazing pastures.  Early in May each year, cows were brought up from family farms somewhere down the dale to the east. Family members lived with them during the summer months, watching over them until November-time when they were brought back down to the main farm. Read more about it in our Shielings and summer pastures blog.

In spite of the hot weather, the smaller fields close to the village were still lush with grass and flowers such as yellow rattle with its bladder-like seed capsules. 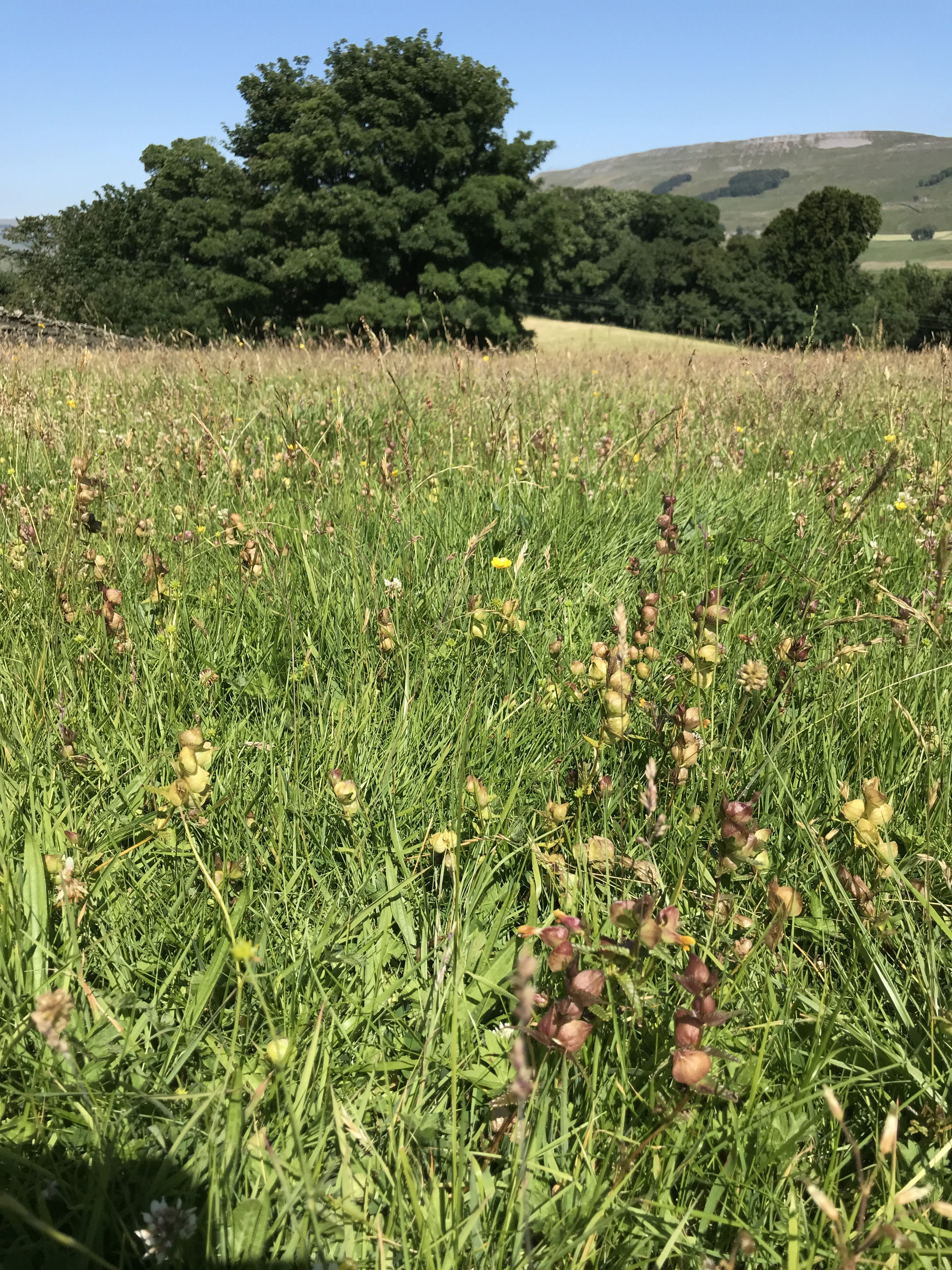 As we walked through the village itself we saw evidence all around us of the importance that dairying once had to its inhabitants, from dried up roadside watering spots for passing herds of cows to ledges where milk churns may once have stood awaiting collection.

An old building (dairy?) on Low Gate has a large stone churn stand outside it – each morning, metal churns full of fresh milk would have been stacked on it waiting to be loaded onto flat bed lorries before being driven to a commercial dairy for processing. The stones the stand is built from are in fact old cheese press weights, showing that before it became more profitable to sell raw milk, the farm produced its own cheese. Read more about the churn stand on our Out of Oblivion website

Local historian Geoffrey Keeble tells us that these stone presses were sometimes communal in Wensleydale and were replaced on farms from about the middle of the nineteenth century by smaller iron presses like this one on display at The Courtyard Dairy near Settle.

Not far from the Low Gate churn stand we found another churn stand alongside an unusual overhanging barn porch with recesses which may have been for storing hand milking equipment like buckets and stools.

Round the back of this barn we saw old milk containers clearly still in use around the farm.

We followed the path out of the village from Low Gate – imagining that this might have been one of the routes followed by the original Norse settlers as they brought their beasts up to the summer pastures in the spring each year.

A lot of hay and/or silage has already been cut in the larger fields and we saw an interesting range of field barns dotted about in them – from the tiny old stone building which would have housed maybe two or three cows over winter through to a large nineteenth century stone barn with what might have a been a lean-to milking parlour added sometime in the early twentieth century and finally a ‘big shed’ for overwintering beef cattle joined on to the short end of the stone barn.

We look forward to finding out more about the history of these buildings in Burtersett and hopefully listening to the memories of people who once milked cows here.

2 Replies to “Exploring Burtersett's dairying past”