Here’s a diary note made by one of the ‘Eel-lite Team’ when kit arrived for looking after the eels:

European eels, a species once abundant in the Yorkshire Dales National Park, are classed as critically endangered.

I learned this fact earlier this year in a chance conversation with Louisa Blundell from the Lune Rivers Trust.  She said she’d recently run an ‘Eels in the Classroom Project’, first developed in the Bristol area, and suggested we tried it out in the National Park.

After an approach to headteacher Matthew Towe, Sedbergh Primary School leapt on board.  A group of four Year Six pupils came forward to form an Eel-lite team.  I was able to assist them to apply to the Yorkshire Dales Millennium Trust’s ‘Green Futures Youth Action Fund’ to help pay for the project.

The young eels, or ‘elvers’, at Sedbergh Primary were environmentally netted in the River Severn.

Louisa and I have been visiting the school weekly.  Years 3 and 4 have been receiving classes on the lifecycle of eels, on the eels’ transatlantic journey (more details on that below!), and on the life of local rivers.

The project is very practical.  Local stones and gravel were added to the tank to help replicate the eels’ natural habitat.  Eels also love to hide so we also added some recycled plastic pipe for them to enjoy.

What do the eels eat?  Answer: ground trout pellets.  As this photo tells you, the pellets are pretty stinky.

The Eel-lite team have decided to raise funds for the Lune Rivers Trust as part of their campaign. The trust works to protect rivers, which are the eels’ habitat for most of their lives.

Here’s the team working on a fundraising and awareness campaign, with a collection bucket in the middle of the table.

In a few weeks’ time – hopefully in mid-June – we will release the eels into the River Rawthey by New Bridge in Sedbergh, which is only a short distance away from the primary school.

One of the stories which has most captivated the pupils is the astonishing transatlantic journey that eels undertake.

Adult eels swim across the Atlantic from European waters to the Sargasso Sea near Bermuda to spawn.  The fertilised eggs transform into a larva called a ‘leptocephalus’ which spends about two years floating on the Gulf Stream from the Sargasso Sea back to Europe.

On reaching European shores, sometime between November and May, they become Glass eels, still only 8cm long.  The eels in our local rivers – for instance the remaining eels in the River Rawthey – will have come up stream from Morecambe Bay, via the Lune.

It’s at places such as Morecambe Bay that the glass eels start feeding and turn black/brown. That’s when they become known as elvers.   The elvers migrate and populate rivers and lakes upstream and grow, being known then as yellow eels.

After anything between 5 and 20 years, they become ‘silver eels’, head down river in the autumn, and out to sea to return to spawn 3000 miles away in the Sargasso. 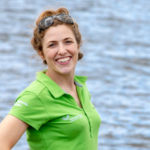 Rachael is our Young Rangers Officer.

One Reply to “EELUSIVE! Sedbergh pupils look after endangered fish”

Rachael is our Young Rangers Officer.