A really important part of the Dairy Days project will be investigating and recording the archaeological evidence for early cattle farming in Wensleydale. One of the most interesting sites we already know about dates to the Bronze Age (c. 2500 until c. 800 BC) and lies on Burton Moor.
The aerial photograph shows this fascinating site really clearly. 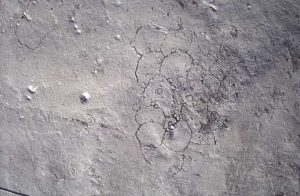 We know that there are fourteen small irregular enclosures or paddocks . There are also the remains of  fourteen or more circular huts, some attached to an enclosure wall, others well inside. To the north-west are the remains of a boulder-walled field system.
Archaeologists believe that this may be a settlement of cattle farmers, presumably with beasts being grazed out during the day then brought back into the safety of the walled paddocks at night where they were protected from the wolves that once roamed these hillsides.  The herders may have lived in some of the huts and used others for storage or even processing milk.
All this is speculation of course, based on the layout, and through comparison with the lives of traditional cattle herding communities still found around the world. South African cattle kraals come to mind, settlements of huts surrounding walled enclosures where cattle are kept safe. 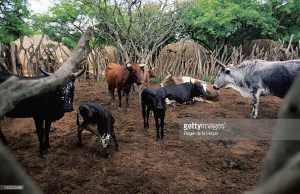 Read more about the Burton Moor settlement on our Out of Oblivion archaeology website. Take a look at the Megalithic Portal website for ground level photographs of the site.
If you are interested in being part of the team surveying similar sites in Wensleydale then get in contact.