We have been doing a little research into the superstitions surrounding dairying after we read this in Marie Hartley & Joan Ingilby’s book ‘Life and Tradition in the Yorkshire Dales’:
“Mr J. Swales, born 1874, of Low Wood, near Pateley Bridge, remembers a family story of his grandfather, born about 1812, going to Ripon to see a wise woman because the butter would not come, and she gave him some horseshoe nails in a bottle to be buried in the churchyard. Similarly, Margaret Little of Lowlands, Askrigg, Wensleydale, used to put a poker across the top of her stand churn to keep witches away” 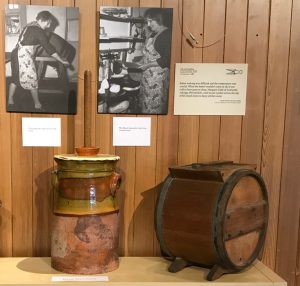 Butter churns at the Dales Countryside Museum. On the left is a plunge or stand churn

It turns out that there has been some fascinating research into similar superstitions in Ireland. The Killererin Heritage Group based in Galway have collected some wonderful folklore surrounding the making of butter:
“A neighbour who called during butter-making was always expected to say ‘God bless the work’ on arrival and then work the dash or crank handle (depending on the type of churn) before leaving, so as not to ‘take the luck.’”

‘The Folklore of Butter’ Killererin Heritage Group 2007
May Day was a crucial day in the Irish dairying calendar. Witches in the form of hares might try to steal milk from grazing cows. Even worse, a witch might take the tether or ‘spancel’ used to hobble cows during milking and by dragging it though the May morning dew on the cow pasture steal the coming year’s butter, “By uttering the words ‘Come all to me’, as she collected the dew, she played a charm on the spancel. Afterwards, while she secretly gloated, the farmer’s wife spent hours churning in vain. The hag’s churn however overflowed with butter.” ibid

Meanwhile, some members of the National Park’s staff have been staying in a traditional Romanian village, where cows are still walked out to pasture daily from village centre cowhouses. Milk is an important part of the diet. The photograph shows some of the team enjoying a traditional cheese dish made from raw milk, soured overnight, strained then boiled with cornmeal. It was apparently delicious, a bit like a cheese fondue. 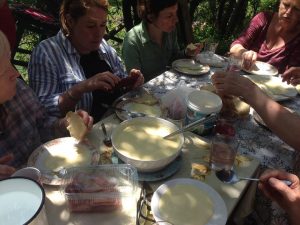 We asked if they had any charms or superstitions to do with dairying and they told us that after they have milked a cow, they mark a small cross on her side with a finger dipped in the milk in the bucket.
We look forward to hearing from the people  that we plan to interview in Wensleydale, whether they  have memories of family traditions and if there are still any superstitions surrounding dairying in the area.