Among the collections at the Dales Countryside Museum are two sets of nineteenth century farm account books which together provide an incredibly detailed history of the finances of two farms making and selling cheese and butter in Wensleydale.

We discovered the first set after reading a short article about them in the museum’s journal ‘Now Then’ :

“Eight small notebooks containing itemised accounts from 1822 to 1850, with a gap of two years from April 1828, in a cardboard box marked ‘Aniseed Balls 20 a 1d’, gave an interesting insight into a self sufficient community in Upper Wensleydale. The books belonged to James Willis of Yorescott. The house no longer exists but it lay just to the west of Yorebridge, north of Bainbridge and had a walled garden. The Willis family was from Carperby and initially James kept the accounts on behalf of E. Willis & Sons as his father, John, died at Yorescott in January 1821. His widow Eleanor, sons James and Matthew and two daughters Jane and Eleanor (Ellin) carried on farming.” 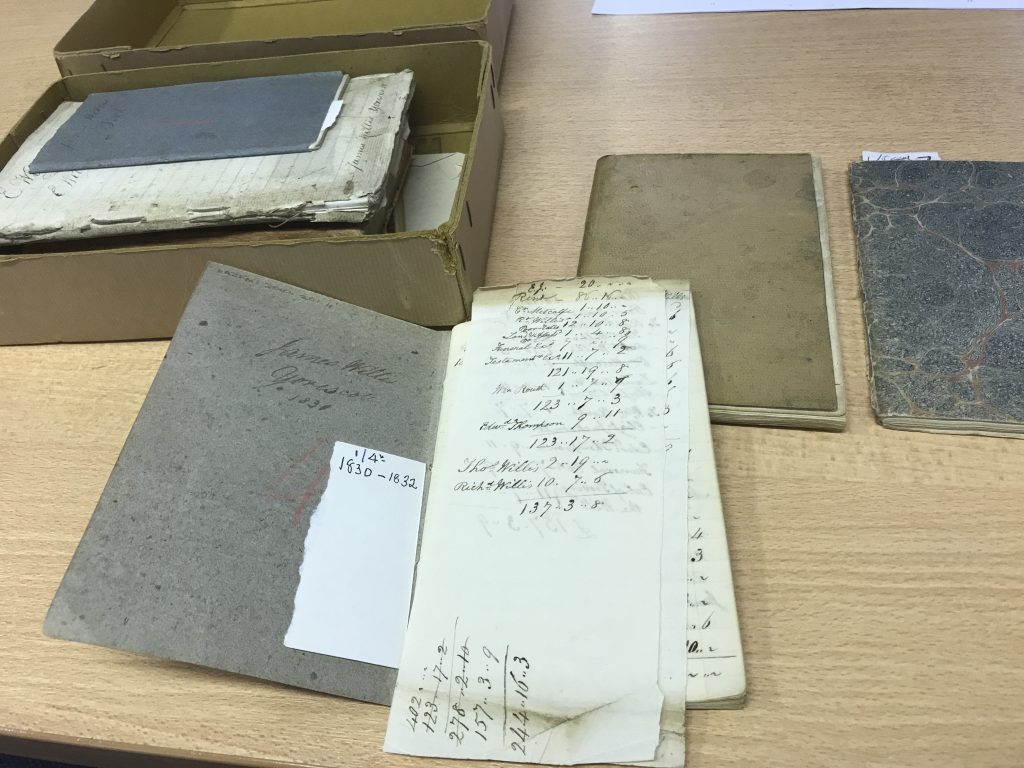 We asked to see the box and have since spent several hours carefully reading through the beautiful copper plate handwriting, watching the minute details of everyday farm life unfold.

For the purposes of the Dairy Days project we were obviously particularly interested in the farm’s production and sale of cheese, milk and butter. James’ cows and their milk were clearly the most economically important part of the farm’s business. As shown in the following extracts he sold directly from the farm and also in bulk to either retailers or cheese-factors some of them quite a distance away. He may also have been selling at local fairs. 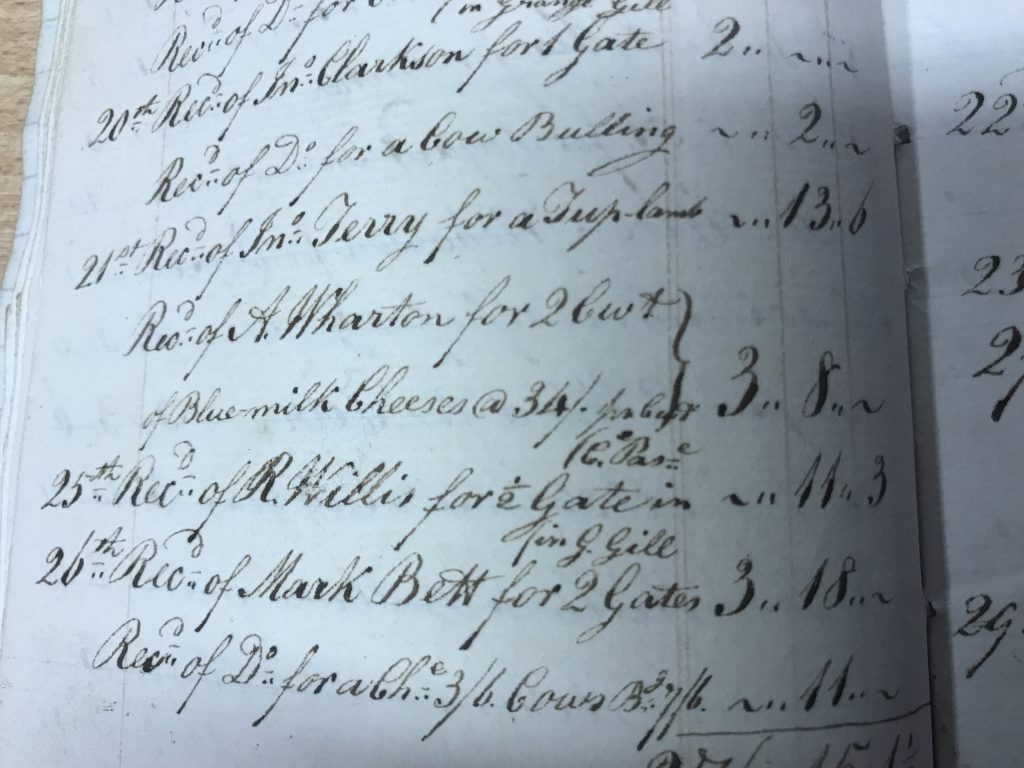 Some names appear many times and we hope to follow them up in the census records to see who they were. We assume for instance that one ‘Jno [Jonathan?] Raw’ was a grocer or wholesaler as he buys large quantities of cheese and butter as well as selling goods back to James. We know that cheese-factors sometimes exchanged groceries with farmers for future purchases of their cheese (see our blog post Early factory production of cheese) but James seems to have paid for everything up front:

James Willis also has some sort of connection with Ripon, we can speculate that he had family ties there. From 1824 he often records the expense of carrying cheese to Ripon.  Later we see him supplying a Mr C Mason of Ripon with £26 worth of cheeses (May 1839) and another £24 worth in June the same year. There’s no mention of carriage so we must assume Mr C Mason came to collect it or perhaps the price included carriage costs?

The expenses of running such a prolific dairy don’t seem particularly high. He employs several women over the years though there is no specific mention of a dairymaid among them so it seems his wife and two daughters carried out that role. Indeed, he does record paying his daughters a wage, “1825 March 14th Jane & Ellin [Eleanor] Willis has had their wage £5 2s 2d”.

At the start of the cheese making season we often see him purchasing ‘cheese-clouts [cloths]’ along with annatto and ‘cheese-colouring’. On 3rd December 1823 he buys 2 ‘sinkers’ – the wooden lids for cheese presses. Occasionally repairs have to be paid for, in 1834 “May 23rd to R[ichard] Howard for mend[ing] Che[ese] Kettle 9d”; 1830 “4th Dec To Mr Lister for mending a churn handle 2d”; 1841 “Aug 21st To Cr[istopher] Lee for mending a Cheese-press Screw 5s”

It is on his cattle however, that James lavishes the most money. He clearly buys and sells beasts as part of his business, dealing in both Scottish and Irish cattle and his frequent visits to Fairs may have been for the purposes of cattle dealing rather than selling dairy goods. He also has one or two bulls which he hires out so that other farmers can get their cows in calf. For several years he makes a list of all his stock and their value at the start of the financial year and it’s quite surprising to see that he runs his whole dairying enterprise off the backs of only around a dozen cows. 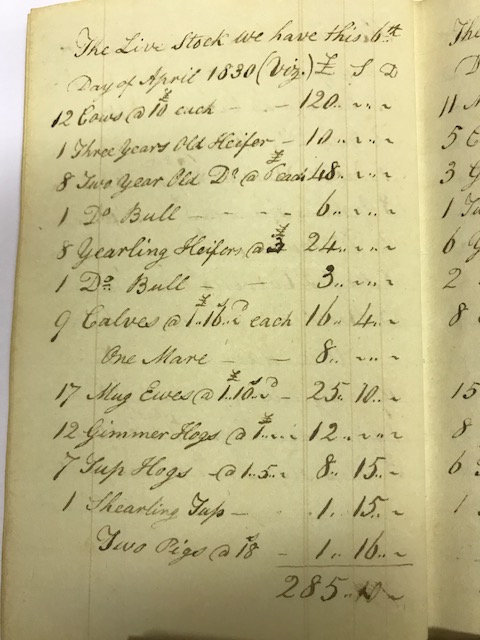 As with most farmers of that era, James probably doctored his own cows if they were sick. He records a fascinating recipe for treating ‘Milk Fever’ in one of the account books. 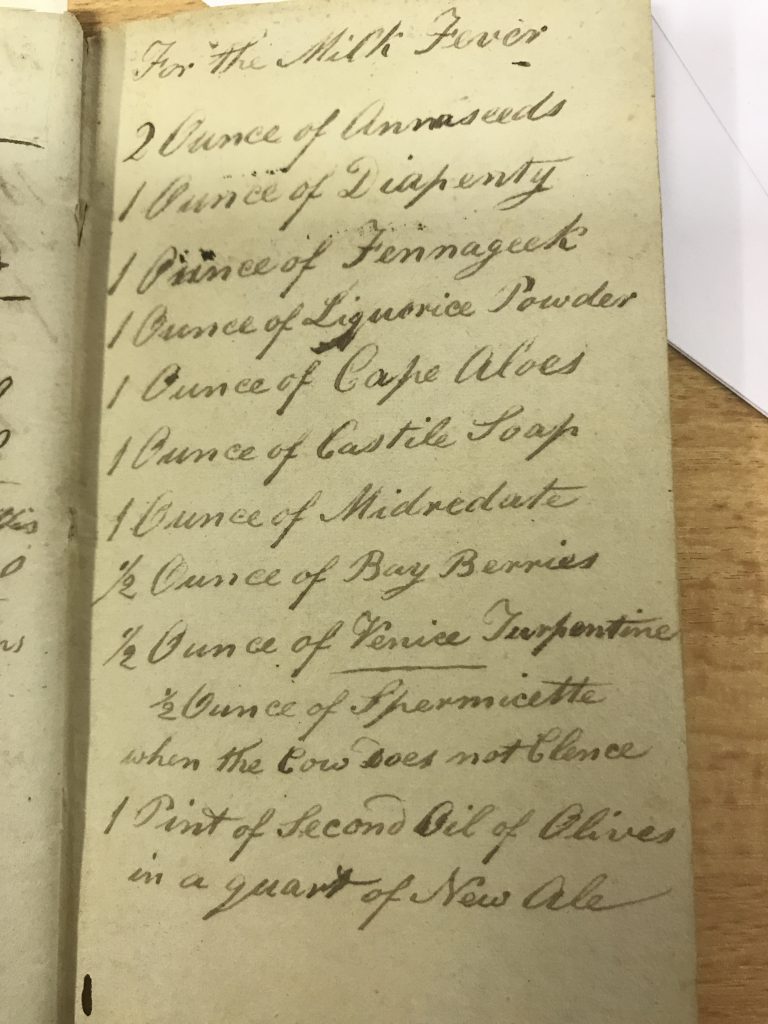 He does however pay for a vet when necessary,  giving 5s in January 1840 to T. Lambert “…for Doctoring a Quey [young cow]”

His cows had names it appears. In 1834 he sells one called ‘Old Plump’ to Simon Thwaite for the huge sum of £15 15s. Another was so special that in the front leaf of the eighth volume of accounts he records the following proud statement: 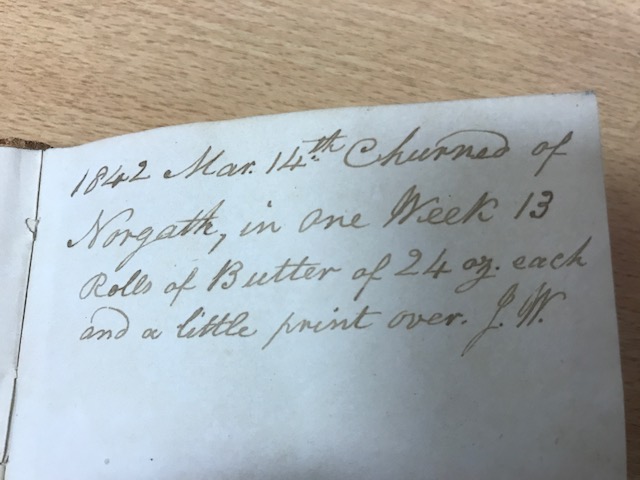 In 1835 the farm appears to be doing so well that a great deal of building work is recorded on separate sheets of paper in the account books. 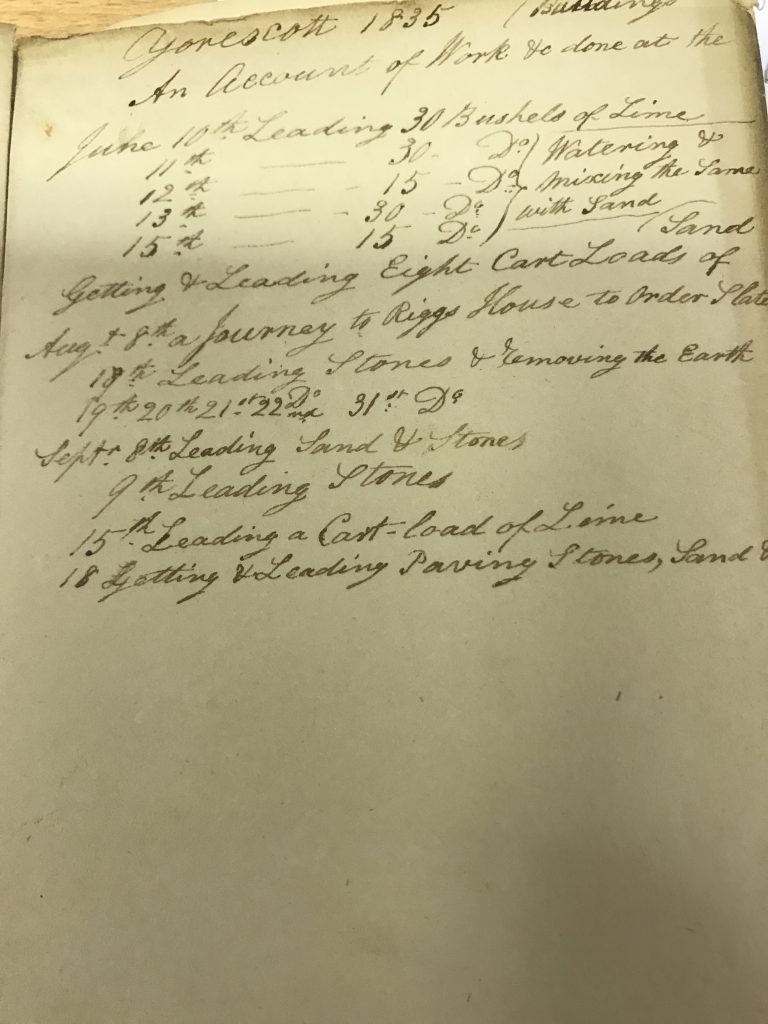 We know that the current Yorescott farm is some distance from the original one and we wonder if these accounts record its building? We know that the Hopper family ended up living there in the early years of the twentieth century (see our blog post A farmer and his dairy cows). We think this photograph was taken  before Joseph Hopper took over the tenancy, at a time when an enterprising farmer called John Moore lived there and rented out holiday apartments and offered fly-fishing as well as having a herd of shorthorn cattle proudly displayed in front of the farm. 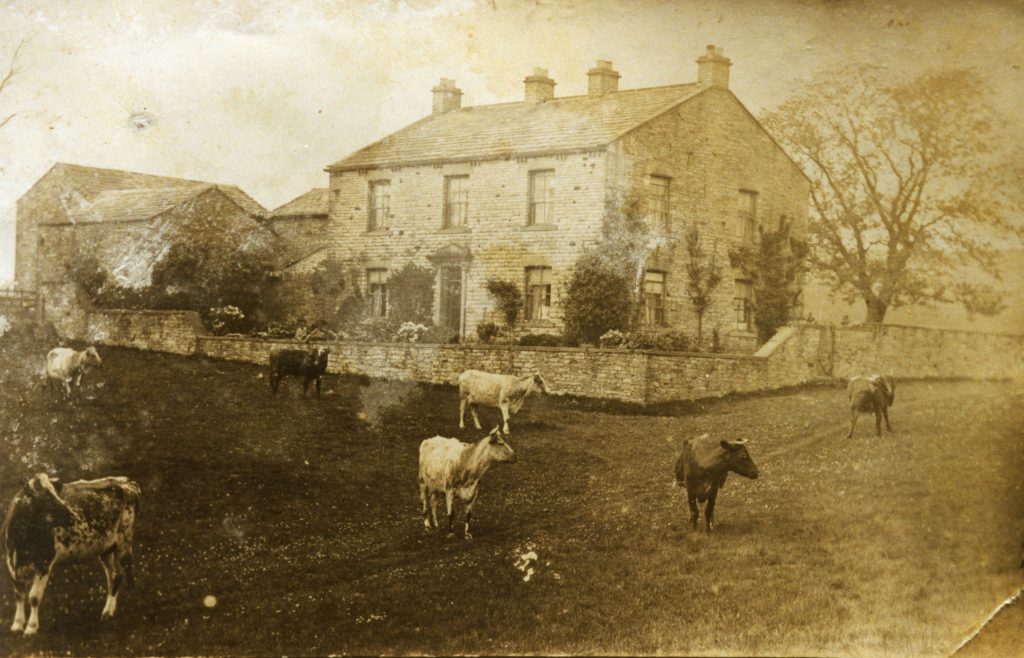 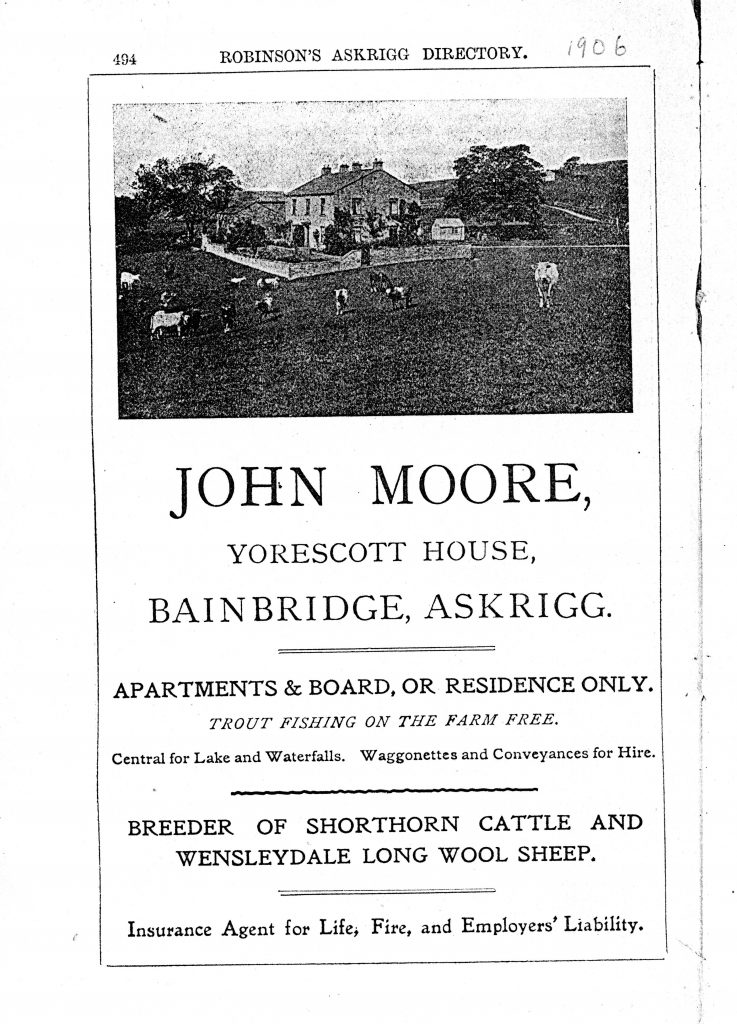 Advert for Yorescott by John Moore 1906 (collection of Ann Holubecki)

In the next blog we will look at the second set of account books we found, belonging to a woman farming in Walden towards the end of the nineteenth century.