One of the most useful sources of information about dairy farming in the nineteenth century and earlier are the Tithe Maps and their lists of field names, owners and occupiers known as the Tithe Apportionments.
Tithe Maps were drawn up during the first half of the nineteenth century in order to allow tithes historically paid to the church in kind (usually agricultural produce)  to be commuted into money payments proportionate to each person’s property and land.
We are lucky in that a local couple, Fred and Joyce Roberts, have transcribed both the 1844 Tithe Map and the apportionment for Bainbridge  and published them as ‘The Township of Bainbridge in the Middle of the Nineteenth Century’ (June 1979 North Yorkshire County Record Office Publications No 21).
Armed with a highlighter pen, we have been doing some detailed research on the places where cows were grazed during the summer months. 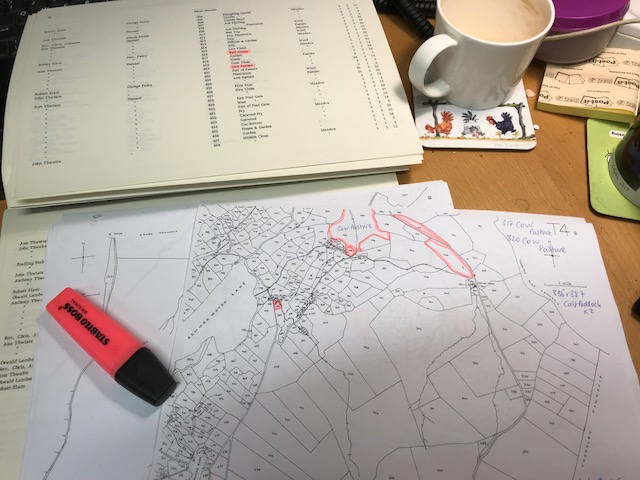 The photograph above shows a large area of ‘Cow Pasture’ relatively unenclosed at Fors (pink highlighter), whereas the photograph below tells us a different story. 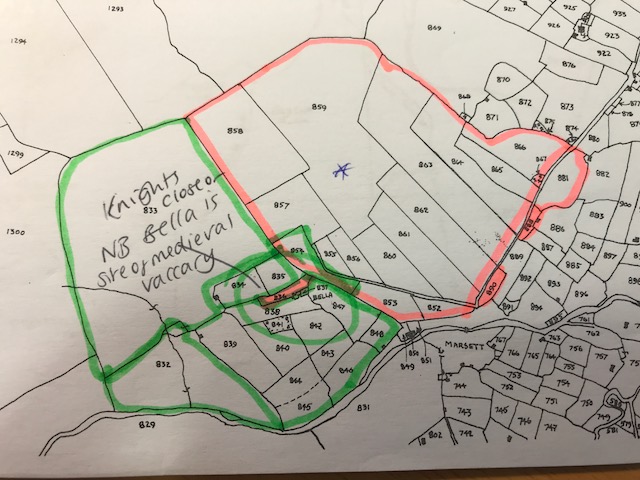 What at first glance might seem to be a range of small fields owned and farmed by different people from Marsett village, turns out to be the remains of a single D-shaped village grazing area called ‘Marsett Cow Pasture’ (pink highlighter), once held in common or stinted, with each villager having a number of cattlegates allowing them to graze a certain number of beasts on it. At some point in time before the drawing up of the Tithe Map in 1844, the pasture has been divided up and enclosed, with each person with grazing rights being assigned a proportionate area which they then had to wall or fence.
Look at the owners and occupiers and an even more interesting picture emerges. A small lot in Marsett Cow Pasture belonged to one Robert Nichols. However, it turns out that Mr Nichols farmed from Bella on the edge of Marsett Cow Pasture and also owned a large D-shaped area of pasture and meadow adjoining it (green highlighter). The names of a couple of his fields tell us more, no 833 ‘Knights Close Pasture’ and no 832 ‘Lower Knights Close Pasture’ allow us to match up the farm with a medieval vaccary of the same name. The D-shaped close or pasture is a classic indicator of one of these cattle farms, owned and run for the benefit of  their aristocratic landowner, in this case, the Lord of Middleham.
Archaeologist and historian Stephen Moorhouse discusses the evidence for the fluctuating numbers of these vaccaries or cattle farms in medieval Wensleydale:
“Occasionally the documents tell us that a farm no longer exists. The loss of income of £6 from the Lordship of Middleham’s vaccary at Bardale in the Forest of Wensleydale in 1465/6 is explained: ‘because the buildings of the said holding are laid waste long ago and the pasturage was taken out of use for the keeping of animals.’ The vaccary was functioning in 1342, but was similarly described in accounts following that for 1465/6 showing  that it was probably not re-occupied. The earthworks survive adjacent to the post-medieval farm at Knights Close…”
Stephen Moorhouse (2003) ‘Anatomy of the Yorkshire Dales: decoding the medieval landscape‘ in ‘The Archaeology of Yorkshire’ ed Manby, Moorhouse & Ottaway
The farm called ‘Bella’ on the nineteenth century Tithe Map is called  ‘Bella or Knights Close’ on the modern Ordnance Survey map, so we can identify it as the likely location of the medieval cattle farm or vaccary called Bardale.